I've just spent 5 days in Sydney on a short visit to my husband who's been working there since the end of October.
Still pondering what to do with our life, so we've decided to wait a few months and hopefully something will pop up in his area in Perth and he will return home instead of the upheaval of relocating to Sydney.
I love visiting Sydney but find that we have so much more quality of life in Perth, we have our house here, friends, my job, a quieter lifestyle...plus I have our baby grandson. And another downside is the exorbitant price of property in Sydney!!

Last Tuesday 23rd January, I flew on the 11pm flight  - a 5 hour flight plus Sydney is 3 hours ahead, so not much sleep and a very uncomfortable flight. I don't think I will be choosing to fly in that time slot again.
On arrival I caught the train from the airport into the suburb of North Sydney where my husband was waiting for me at the station. Just outside the station we caught a bus to his place of residence - a little studio granny flat in the lovely suburb of Middle Cove, which isn't far from his workplace.
When we got home my husband took the bus to work and I went to bed to take a nap.

I set the alarm for 10,30 as my friend Bebe would come and pick me up at 11 and lay down.
The surrounding noises were different from what we have in our street, and it took me a while until I shut my eyes. Just as I was falling asleep I heard a lawnmower going.
I got out of bed and looked out the window to see two guys mowing the lawn just outside the granny flat. After mowing, they started with those awfully noisy blowers...
Well it wasn't meant to be, no sleep!
I showered, changed and watched some TV until my friend arrived. 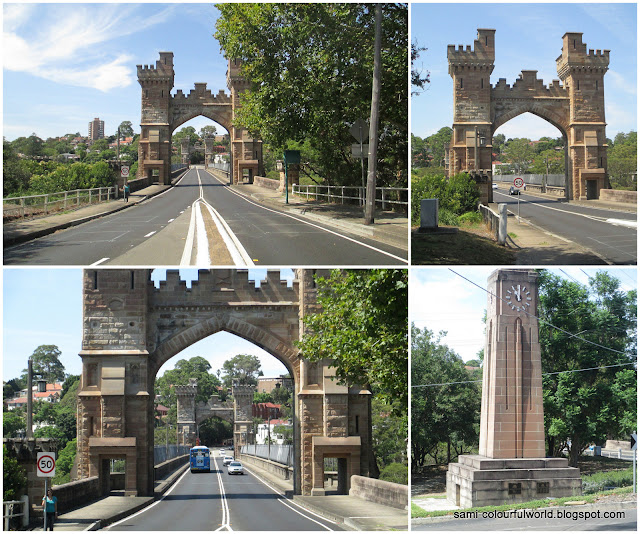 Our first stop was just a few kms down the road to take photos of Long Gully Bridge (or Suspension bridge) linking the suburbs of Cammeray and Northbridge just 7km from Sydney's Central business district.
The bridge was originally built as a suspension bridge in 1892 by a team of land developers in a Federation gothic style. At the time it was the largest suspension bridge in Australia and the fourth largest in the world.
The reason for the bridge was to have a tram line linking the more developed areas of North Sydney to the new suburb of Northbridge where they were hoping to attract buyers to the new allotments being sold.
Due to the 1890's recession and the severe drought,  little development in the new area took place, and the company that built the bridge went bankrupt.
The bridge was purchased by the Government in 1912 and it was only in 1914 that the first tram crossed the bridge.
In 1936 corrosion was found in the steel cables and it was decided to replace the suspended bridge with a concrete arch structure. The Gothic towers and archways were retained and the new bridge was reopened in 1939.

Next we drove to Cremorne Point, a leafy suburb on the northern shores of Sydney to walk the 3km circuit trail and enjoy the beautiful views of Sydney Harbour,  the city       skyline and across to Mosman Bay.
At the start of the walk all you see are the lovely seaside houses across the bay, but soon the Opera House, the Harbour Bridge and the Sydney tower appear into view.

Halfway through the walk a 33mt long sea pool comes into view - MacCallum Pool.
Built as a rock pool by Olympic swimmer Fred Lane in the early 20's it was looked after local resident Hugh MacCallum. In 1930 North Sydney council named it after Mr MacCallum in recognition of his work.
Entry is free with a great backdrop but the bottom of the pool looked very grubby.
There was a council notice that it would be closed for cleaning 2 days later and I've hence learned it gets emptied and cleaned once a week, as it's filled with water from the harbour.

At the Robertsons Point on the southern tip is a lighthouse constructed in 1910 and still active. The access to the lighthouse is closed but you can get close by descending a couple of stairs carved on the rock.

All along the walking trail is lined with unique and beautiful homes built around the 1910's to 1930's and some modern more recent constructions. I can just imagine the price tag!!
Some of the bigger houses have been converted to apartments, but with views over Sydney across the bay a three bedroom apartment can set you back $1000 a week!! 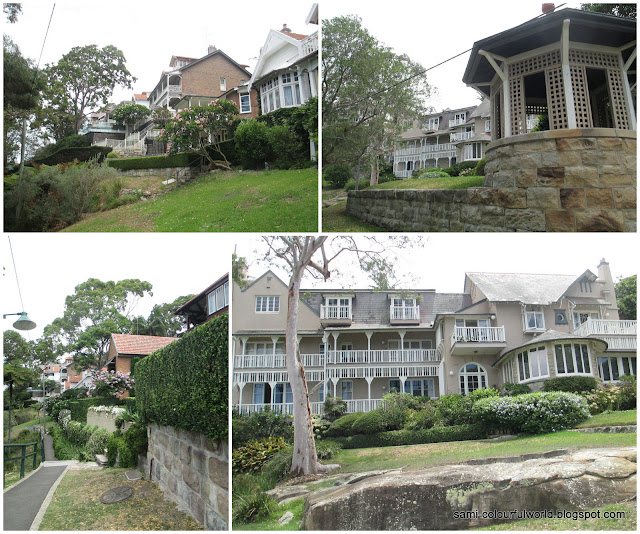 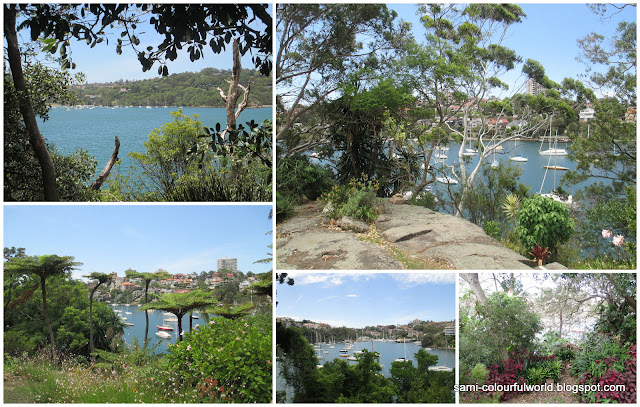 One of the areas has a well planted garden leading to the edge of the water.
A local couple, Lex and Ruby Graham built the gardens in the 1950's and volunteers maintain the gardens nowadays.
And it all started with an elephant's ear that floated by while he Lex swam in the area. He planted it and together with then girlfriend Ruby watched it grow. Friends provided them with cuttings and so began this amazing garden.
Rubbish and weeds were cleared and paths made with rocks and logs. Clivias, agapanthus and tree ferns were used to hold the soil and avoid erosion.

There are paths leading to the water and spots to sit and enjoy the peace and the birdlife.
Lex died in 1988 and Ruby died in 2009, having given 10 years of their life to create this little haven, a true labour of love.

If you don't have a car you reach this area by ferry from Circular Quay to Cremorne.