Bremer Bay Resort and the Mermaid
Following from my previous post, on our first night in Bremer Bay we went to dinner at the Mount Barren restaurant at the Bremer Bay Resort.
Right outside the building they have this huge mermaid statue made with scrap metal and mosaics.
The dinner was actually very good and tasty, service was good, but with a pub with live music next door the noise was a bit too loud for my liking. The kitchen also closes at 8,30 pm, so don't be late!  The resort also rents out rooms and chalets.

After dinner we dropped our friends at the caravan park and went back to our Airbnb house for a well deserved rest. 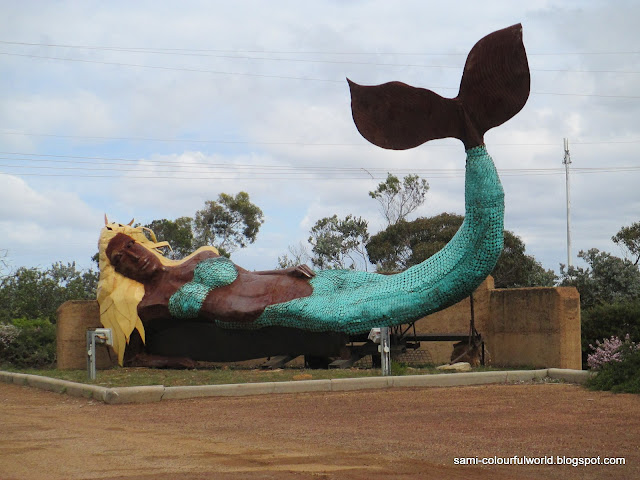 The small town of Bremer bay is situated at the mouth of the Bremer River, with a population of about 750 people. They have a general store, petrol station, medical centre and pharmacy, a hardware store, a church, two camping parks, the resort and restaurant and not much more in the way of shopping.

The first morning, after a breakfast of farm fresh eggs (left to us by our host with the note that they were freshly laid) and bacon, we got in our car and drove around to the most beautiful beaches.
At this time of the year Humpback whales and Southern right whales can be spotted around these waters and as we were leaving home the neighbour from the house in front mentioned there were whales at the beach... 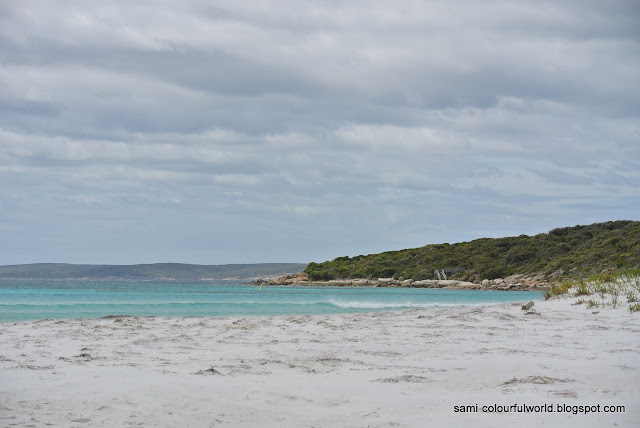 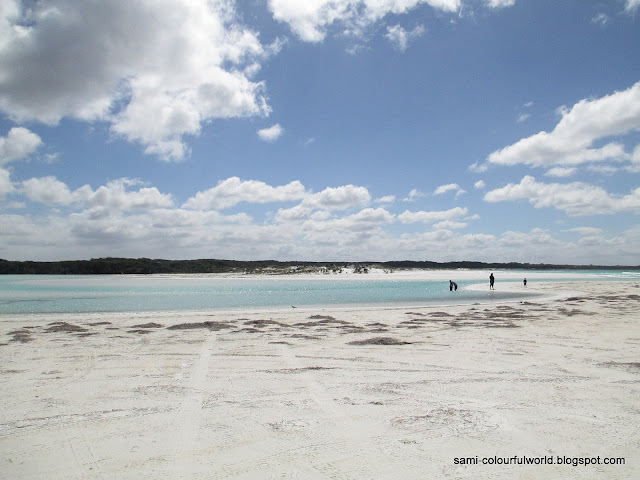 We visited most of the town's beaches, and they were all spectacular, mostly deserted, just a couple of fishermen dotted around or a couple of brave kids getting wet in the freezing water.
The beaches had sand so fine and white and the sea water went from transparent+to various shades of turquoise. Just beautiful, I think the photos don't do it justice!! 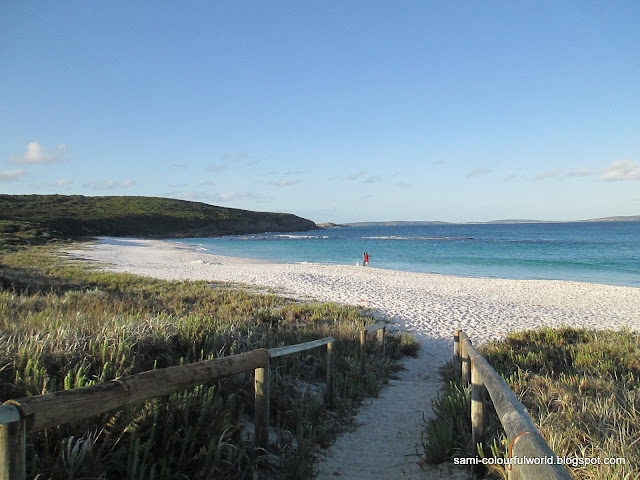 We climbed Bremer Bay's  highest lookout, the Tooleburrup Hill, but couldn't spot the whales. It was also so windy up there it was almost impossible to be out of the car!
As we drove into one of the beaches, the same neighbour who was leaving the beach handed us his binoculars! Wow, only in small towns something like this could happen, handing us property that he might not see again! 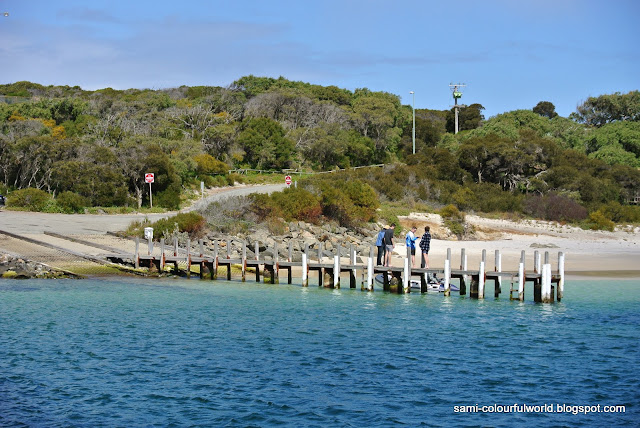 The whales
At  the jetty we spotted dark shapes in the water,  and using the binoculars I saw two whales jumping up but this next photo is all I managed to get.
The kids in the inflatable boat were quite close to it and when they returned to the jetty they reported they could even see the barnacles stuck on it's head! They were so excited, and so was I, even though I didn't get that close to the whale!

Another lookout in Bremer Bay is the platform near the the wind turbine. The turbine supplies 40% of the town's power. 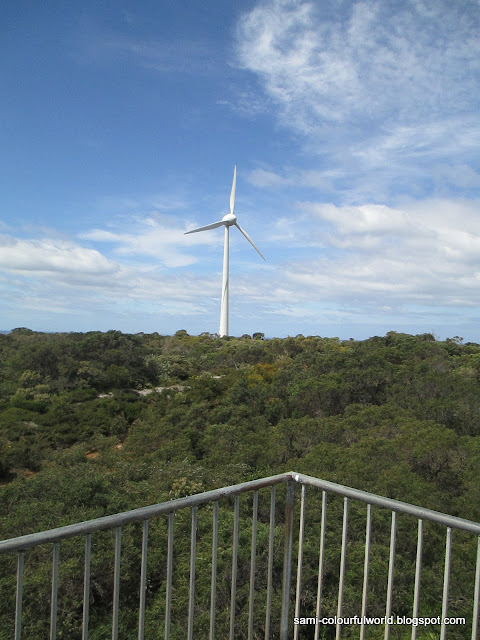 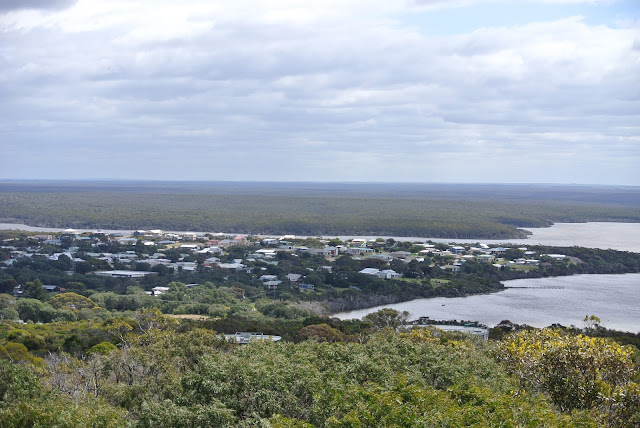 The town of Bremer Bay as seen from the wind turbine lookout tower.
For the 3 days we spent there, the weather wasn't the best, the sun peaked through cloudy skies, but the worst was the wind, always very, very windy and humid!
I don't think I had ever experienced this type of cold in Perth, one of the evenings I was wearing 4 layers of clothing!! Not even in winter in Perth I do that!

Next I'll post about our tour of the Fitzgerald River National Park and it's beautiful wildflowers.
Posted by Sami at 22:43 17 comments:

Bremer Bay - the trip down south

Taking advantage of the Queen's birthday long weekend in Western Australia, we joined some friends for a 4 day weekend in Bremer Bay, just over 500km south east of Perth.

The Giant Ram at Wagin

On the way there we came across a gigantic statue of a ram at Wagin - a sheep town that once a year holds the biggest agricultural show in Western Australia. 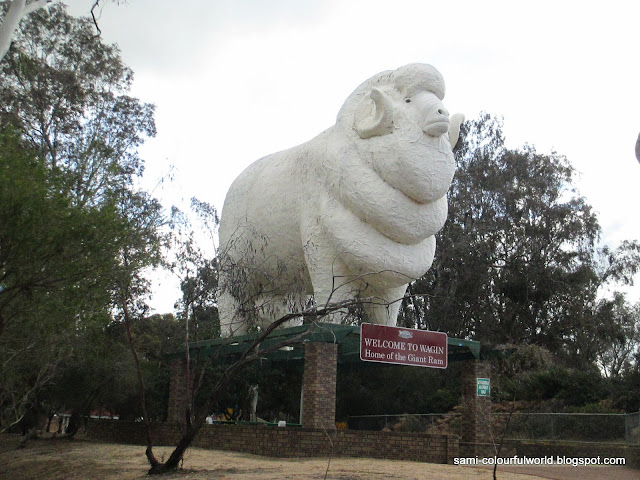 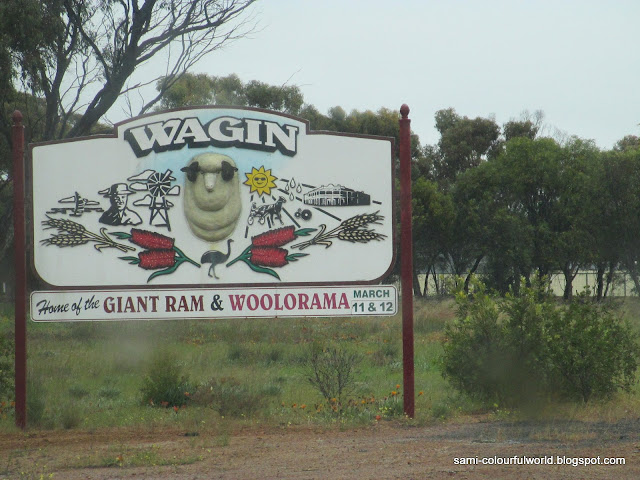 We found the house I had rented through Airbnb, unloaded the car, unpacked and then met up with our friends who were staying at the Caravan park so we could have dinner together.

Next post - Bremer bay, the beaches and National Park.

Another one of the six murals painted for the "Underline: Freo Rail Bridge Mural Project" in November 2015, on Tydeman street in North Fremantle.
This one was painted by the very talented Dutch born and Fremantle resident, Amok Island and it's called "Blue Swimmer Crab".
Apparently the artist catches this type of crabs in the nearby Swan River, so he thought it would be a fitting subject to paint.

For more murals from around the world please click this link. 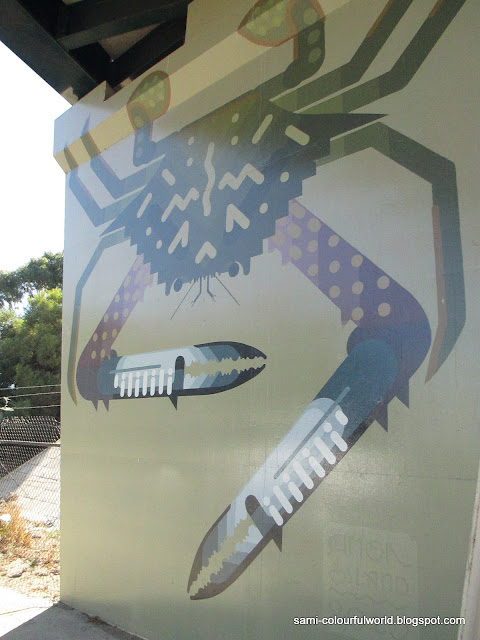 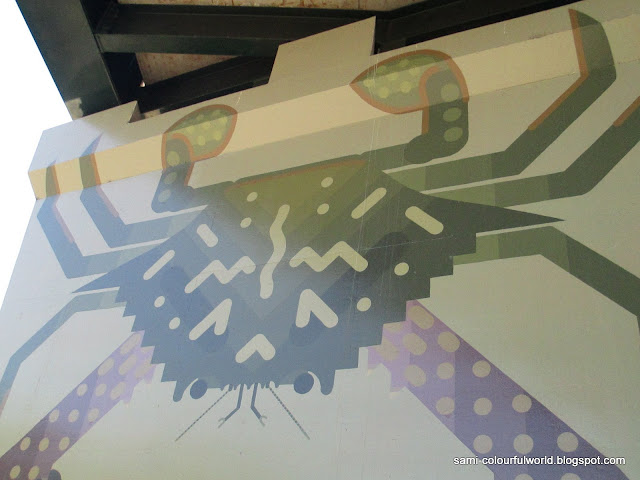 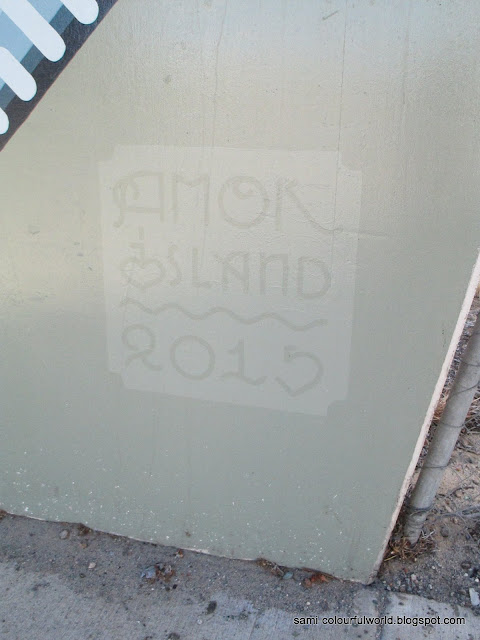 My son and daughter in law's baby shower was held this afternoon.
It was originally meant to be held at the beach park near their home, but due to the weather prevision for wind and rain, this morning it was changed to their house.
It wasn't the traditional shower just for the ladies, they decided to include the male partners too. 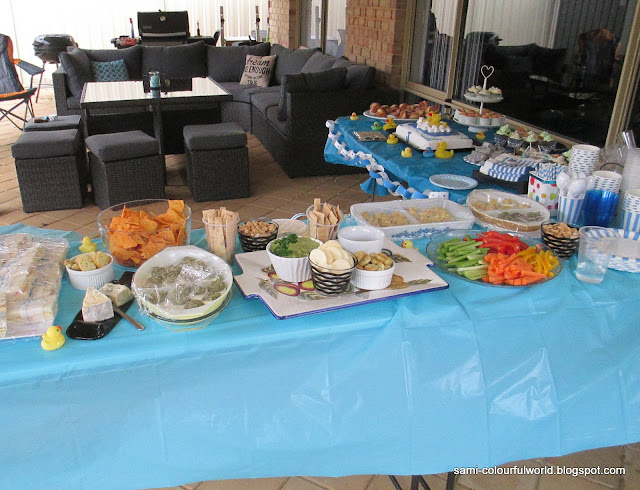 Sara is very talented, and she baked and iced a cake for baby J. 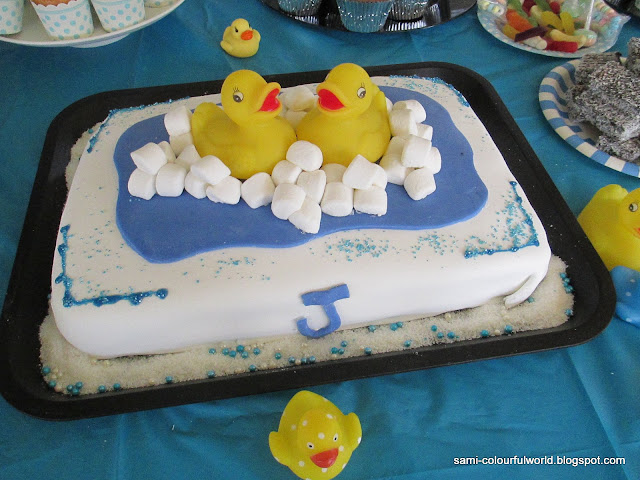 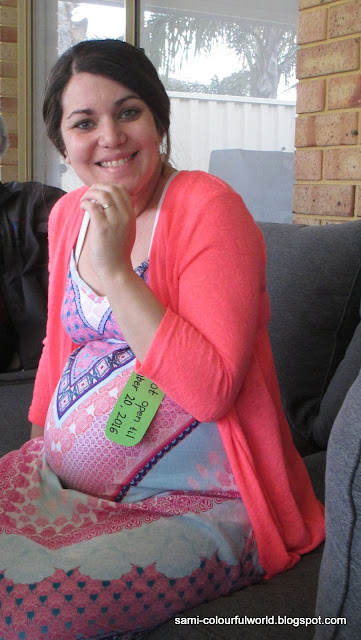 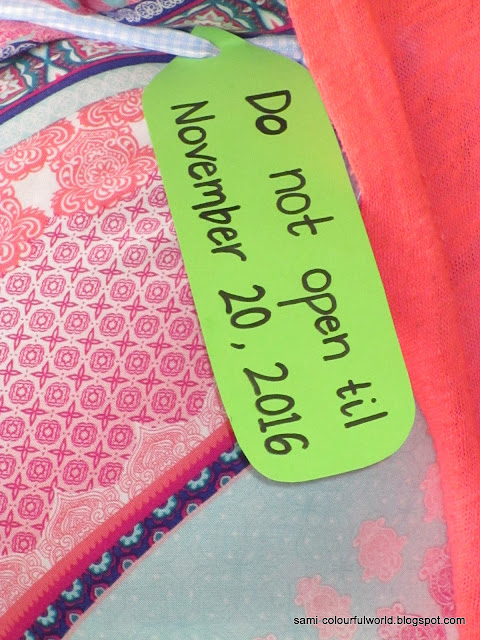 And I just remembered this morning that my cats were born 9 years ago yesterday.
Here are Shelley, Twiggy and the ginger male is Fluffy.
I was going through some of the latest cat photos and all I could find was photos of them sleeping...they do sleep a lot - eat and sleep -  no wonder they are so chubby! 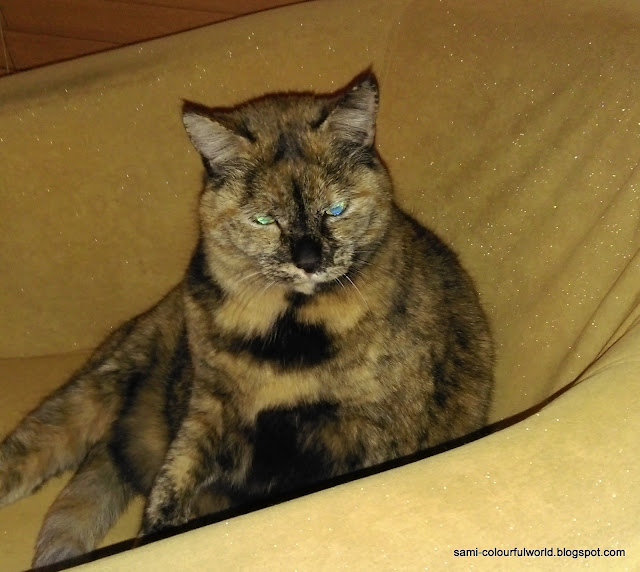 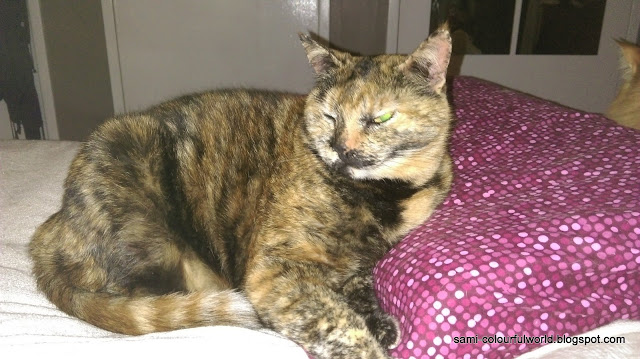 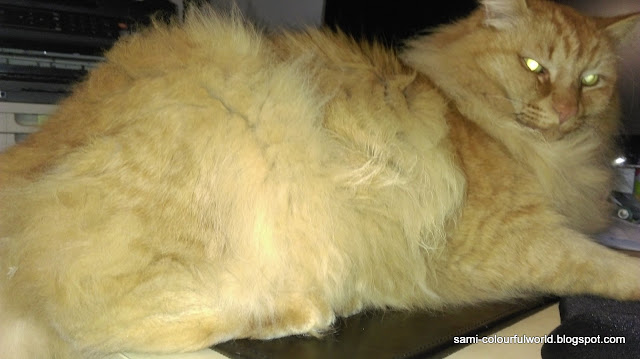 Email ThisBlogThis!Share to TwitterShare to FacebookShare to Pinterest
Labels: Cats and dogs, Family

Expat Interview, preparing for a Baby shower and Gardening

Hi,  hope you're having a lovely Saturday.

A few days ago an interview I gave last year, was published in the Expatfinder website.

Click on this link to read it.  You can also read other interviews from expats living all over the world by going to the "Community" tag on the right, and clicking expat interviews.

With my daughter in law's baby shower this Sunday, the two organizers gave me the task of making some of the food. So this morning I boiled 2 dozen eggs and made Devilled eggs, Olive Tapenade and Avocado & Zucchini dip and prepared Brazilian Cheese rolls.
Tomorrow I will bake the cheese rolls so they are nice and fresh and I'll cut up some veggies for the dip platter too.
I haven't taken photos yet, but will take tomorrow at the Baby shower.


Because it was a sunny day and our garden has been neglected over the winter months, I headed outside and spent a couple of hours cleaning dead leaves, weeding and changing plants around.
A friend had given us some succulents a few months ago, they had grown and some of them were now pot-bound so they needed to be repotted into bigger pots.

All the plants in pots sitting on the pebbles are now in bigger pots. Once I finish painting one of the fences I will then re-pot these succulents on the soil.

All the plants on top of the table were full of weeds too which were removed, but they are also awaiting repotting.

Weeds galore after all the winter rain...

What about these flowers, are they magnificent? They belong to the Aeonium Zwartkop, original to the Canary Islands.
I have dozens of these plants that I propagated from the leaves of a single plant and this is the first time one of these has flowered. Sadly it also means that the plant will die. 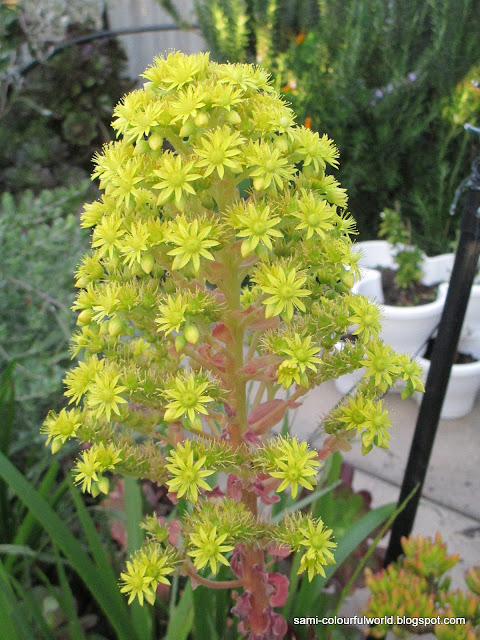 I noticed that the banana tree has a flower stalk which means we will get bananas sometime, don't know when...but it's the first time since it was planted 4 years ago. 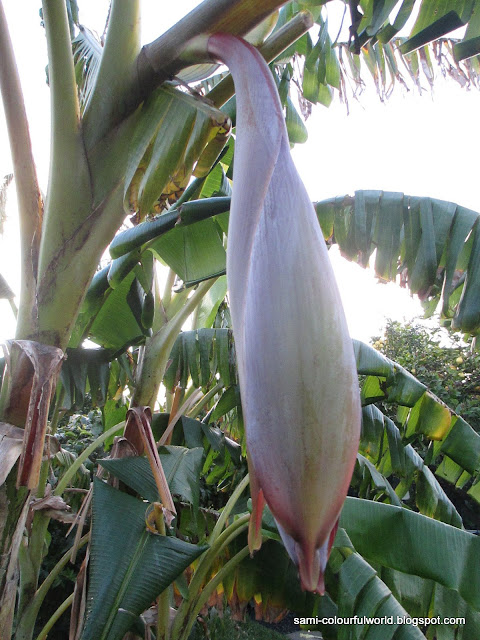 I collected a few passion-fruit that had fallen from the vines. I usually add them to my breakfast yogurt.

It was quite a productive afternoon and I really enjoyed being outdoors and working in the garden! I can't remember when I had last done some gardening... 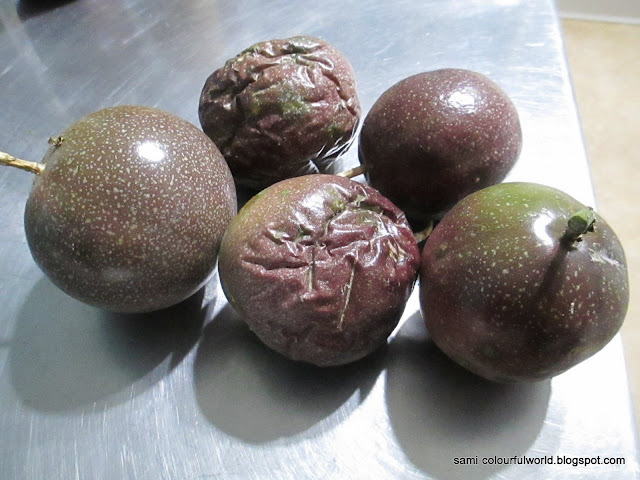 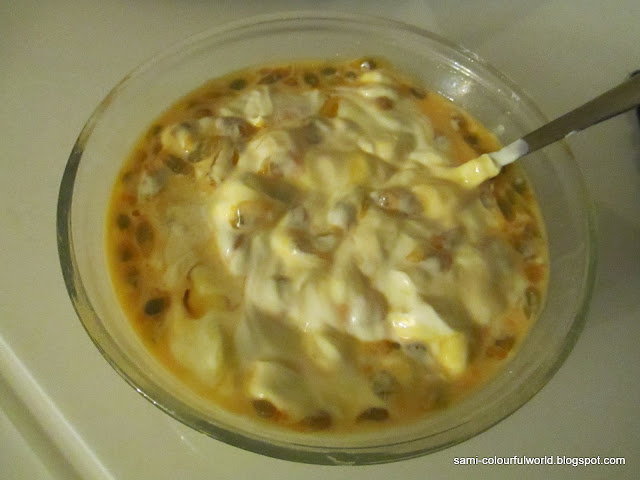 Monday Mural - The old man and the sea

Right next to the mural from last week's post, was this mural of a gray bearded pipe smoking fisherman surrounded by the see waves, ropes, surfers, lighthouse, all relating to the former fishermen's village of Cascais .
Painted by Youth One (real name - Adalberto da Costa Brito, he was born in Angola), the mural can be found at Travessa Visconde da Luz in Cascais (Portugal).

If you enjoy murals click on this link for other murals from around the world. 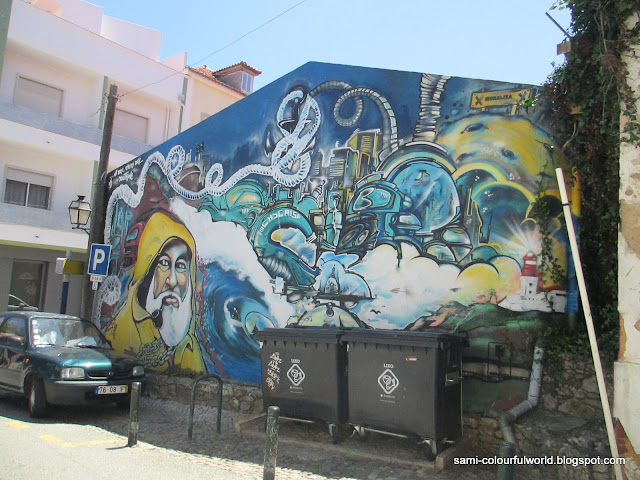 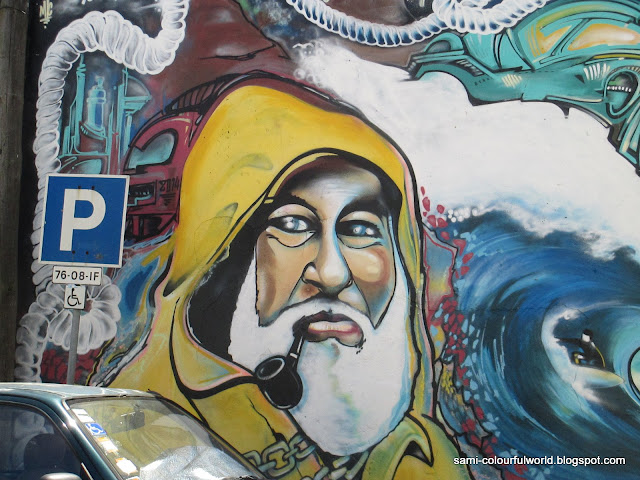 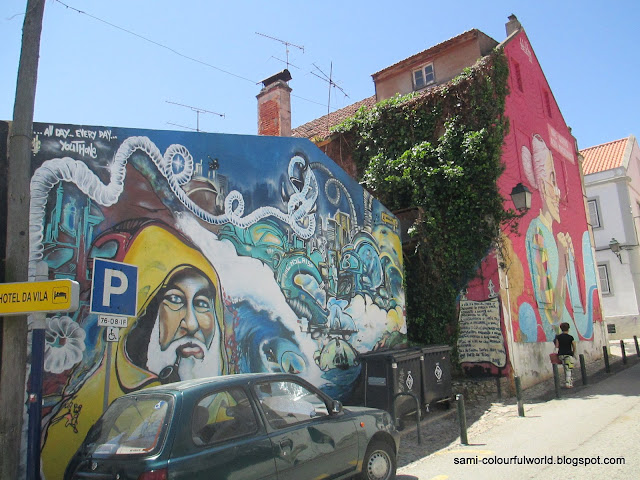 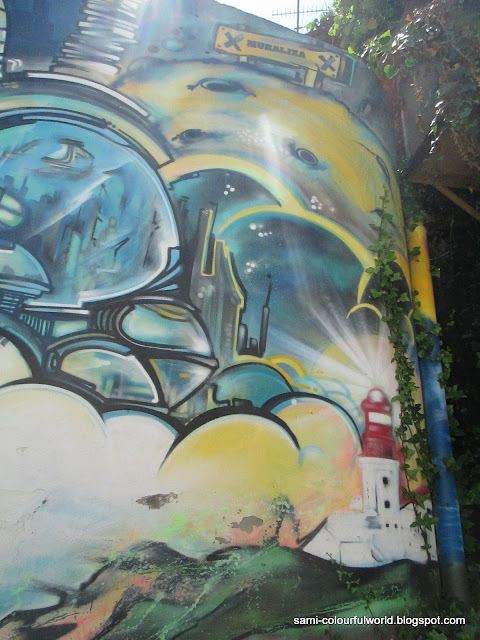 And the poem painted on the pink wall that I thought was part of the mural with the knitting grandmother actually belongs to this mural.

"The village and the beach made the fisherman go to sea, while the seagull flies sliding in the sky, following the boat ready to anchor. The lighthouse lights the way, bringing adventurers, while the wave grows, making the soul smile. The sun gives life to the sky, joy reborn...
Deep down, we are all a part of everything.  YOUTH" 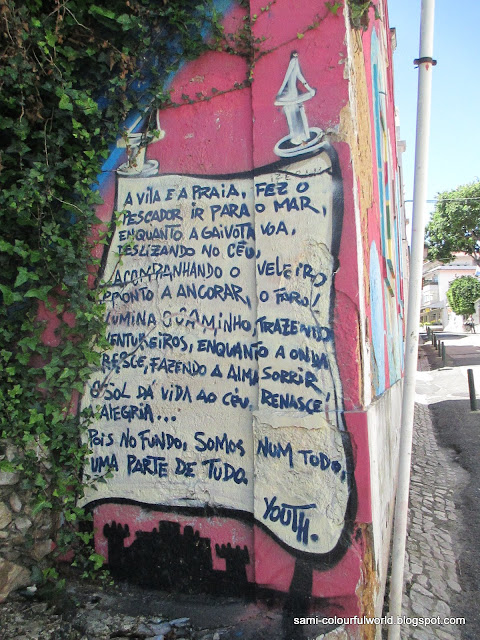