A - Z of Australia - Q is for Queen's Gardens

Within the city of Perth´s boundaries there are 18 parks, covering a total of 140 hectares of land.
On the eastern end of  of the city of Perth, right in the middle of the city´s hustle and bustle is a lovely park - Queen's Gardens - opened and named in 1899 in honour of Queen Victoria, by the then Mayor of Perth, Alexander Forrest.
Situated near the WA cricket arena (WACA), the park is easily reached with the Red Cat (free bus).
The park is modeled on a London park, with a lake with ducks and a copy of Peter Pan´s statue.

Queens Gardens grounds of 3,3 hectares, were first a common area used as a venue for horse racing, then a brick factory and clay pit site until 1890, later a botanic garden. From the 1900´s new improvements were made, such as new entrance gates, new bridges, installation of electric lighting, so that the garden could be used in the evenings...
Although almost in the centre of town, the gardens are a quiet haven where you can lie down on the grass with a good book, have a picnic, watch the ducks and black swans in the lily filled lakes (the old clay pits), wander to the herb garden in one corner, admire the flowers, watch the bird life...The park has also become a very popular venue for garden weddings and wedding photos. 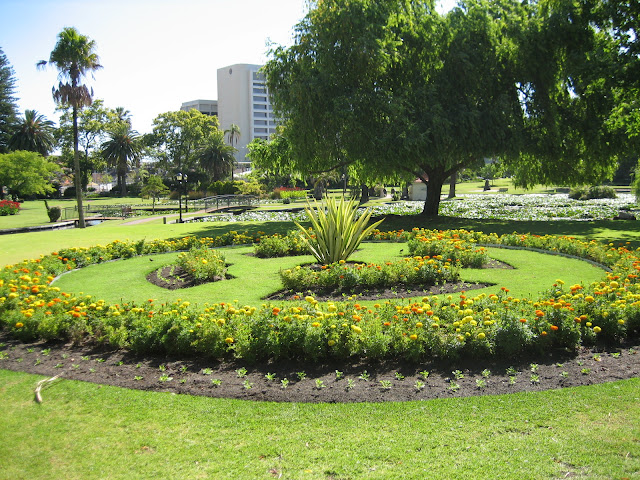 To mark the Western Australian State Centenary in 1929, the Rotary club of Perth presented the city with a statue of Peter Pan, a replica of the one found in Kensington gardens in London.
Another famous, but this time genuine article, is the bench used in the film "Notting Hill" where Julia Roberts and Hugh Grant are sitting at the end of the movie. It was anonymously donated to the city of Perth by a local resident, and it bears a beautiful inscription "For June who loved this garden, from Joseph who always sat beside her" and "June Wetherby 1917-1992".
The park is enclosed by a wrought iron fence, and the facilities include plenty of wooden seats, a gazebo, public toilets, and a drinking fountain. 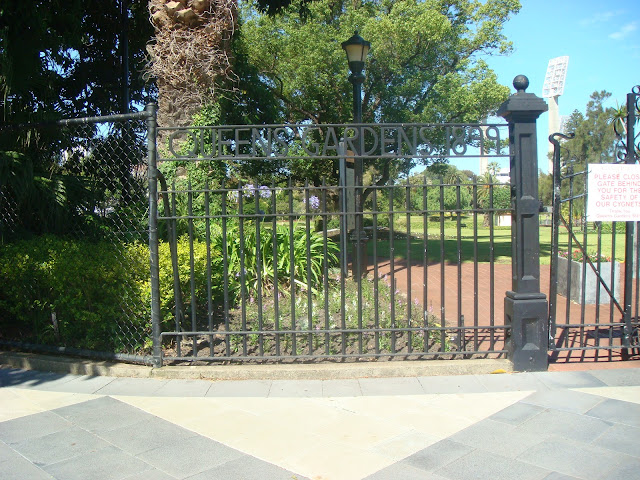 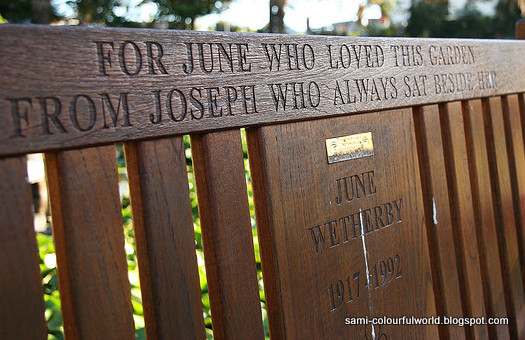 A - Z of Australia - P is for Public Transport

If you need to plan a journey or look up maps of where to get a bus or train, just go to the Transperth site and you will be surprised with the wonderful journey planning tools, timetables, detailed maps with all the roads and the hundreds of bus lines going through them. The buses also carry copies of their specific timetable with a map, so you don´t ever need to feel lost. Apart from that most bus drivers are quite friendly and helpful. The transport system is divided into nine travel zones which are defined by circles around Perth city. Each zone covers an area between eight to ten kilometres wide circle.

In the city centre, Perth is well served by the "CAT" buses" (Central Area Transit) that are free.
There are 3 bus lines - the yellow, the blue and the red -  going in different directions and overlapping at certain points. Fremantle  and Joondalup in the north are also served by a free CAT service. These buses help reduce traffic in the central business areas, as well as being quite handy for visitors and residents, as they go past all the main attractions and you can hop on and off whenever you wish. They run at about every 8 to 15 minutes intervals, and there is no limit to how often you get in and out.
All other bus services that are boarded within the city boundaries are also free, in the so called Free transit zone. The main bus stations in the city are Wellington Street or the Esplanade Busport.

On routes where there are more than 1 bus, or very busy routes, you would get a bus stop sign like the one below where you can see the timetable for each of the various buses (which would be at the back of this sign), and a map with all the stops to enable you to choose the best options.


Tickets: If you are a casual user, tickets can be purchased through the driver if travelling by bus, through ticket machines in some train stations, or ticket offices at the main bus/train stations in the city.

But if you are a frequent traveller, you should rather purchase a "Smartrider", which is an electronic travel card for $10, from a Transperth info centre either at Wellington street or Perth Esplanade station, or other Transperth outlets around the city, as it makes it easier to travel and saves you a little bit of money too, the trips are cheaper, and you will soon recoup the $10 spent on the card.

Then just load the card with the minimum of $10 and tag on (scan into the card reader) when you climb the bus or go through the turnstiles at the stations and tag off at your destination and the correct fare will be deducted depending on how many zones you travelled. When the money is getting low, when you tag on it beeps differently and you know you should recharge with the bus driver or at the machines with your bank card, or online via BPay.
Smartrider gives you 15% discount on cash fares, and if you choose the "auto top-up" via bank transfer, the fares are actually 25% cheaper. If you top up with a bus driver, don´t expect change if you give him a note, the minimum would be $10, unless you have a concession card, and then it would be $5. The driver will give you a paper receipt, but you still have to tag on to validate the trip.


Primary and secondary students can get a Student Smartrider enabling them to pay a 50cent fare, when travelling to and from school regardless of how many zones. People over 60 can get a Senior Smartrider, with reduced fares during peak hours (7 to 9am and 4,30 to 6,30pm),  but free during off-peak hours on weekdays and during the whole day on weekends and public holidays. University students also get a concession Smartrider with discount fares.

Your ticket entitles you to 2 hours of transport in any direction, so if you are quick enough you can zip into a shopping centre for example, do your shopping and get back on the bus to go home, all for the price of 1 ride!
Registering your Smartrider card with Transperth, would enable you to block the use of your card if you lose it (just in case you have it loaded with plenty of money) and you would also be able to view your travel patterns and fares charged, online.

Just don´t forget to tag off  when leaving the bus, otherwise you will be charged with the default fare to the final destination of your bus, the next time you tag on.
If travelling by train, you would be charged the default fare for 7 zones, which can be quite expensive, in my case for example as I only travel 2 zones! Paper tickets or the use of the Smartrider card enables you to use buses, trains, the ferry service, just make sure to tag off and tag on again in the new means of transport. Very simple indeed and a very good system!!

Recently I was in Adelaide where you have to buy a paper ticket with 1 or 10 rides for public transport, but they are soon introducing a card system like ours. People were being interviewed about this future development, and someone was saying "it was time a card system was introduced just like they use in London"! I had to laugh, why London, she didn´t have to go that far, Perth has such a system introduced to the public in 2007,  and they are right next door to South Australia!


One of the most used bus routes in Perth is the Circle route 98 (clockwise) and 99 (anti-clockwise).
They run every 15 minutes during the day and every 30 minutes at night and on weekends, and they stop at most shopping centres, schools and universities in Perth. The maximum fare you pay will be a 2 zone fare, even though you might cross many zones during the full 3 hours and 20 minutes the bus takes to complete the full circle. Another curiosity - around 180 thousand passengers use the circle route buses every week!!

If you use a wheelchair or are pushing a pram, the driver will lower the bus and a ramp will come out to enable passengers to get on board. There are also allocated seats for senior or parents with kids, and passengers on wheelchairs.


Apart from hundreds of bus routes, there are also 5 train lines coming out of the main train station in Wellington street in the city centre. Trains run about every 12 minutes, except during rush hour when they run about every 3 minutes.

Most train stations have parking facilities, some that are free which obviously will get full pretty quickly and early, and then others that are paid up. Parking vending machines are being installed and soon you will be able to pay parking using the Smartrider too. But of course taking the bus to the stations is encouraged. Bicycles can be stored at certain stations too, or they can go in the trains as long as they are transported after peak hours.