Dogs and people walking for a reason


I don't have a dog, I have 4 cats, but I thought that seeing thousands of dogs walking with their owners and families to raise funds for the RSPCA would be a fun outing!
Besides that I also wanted to donate a few dollars towards the cause. 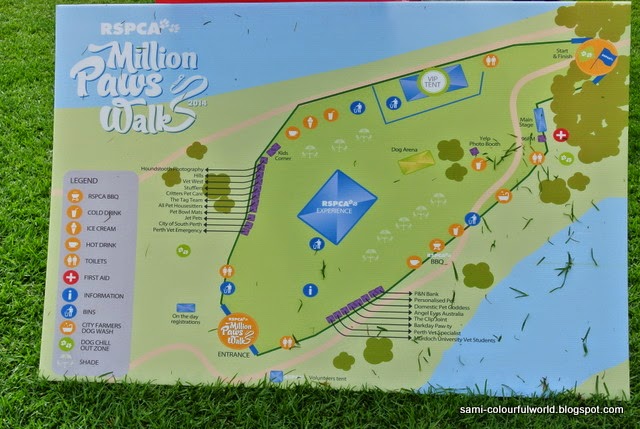 At 10AM,  I was at Sir James Mitchell Park in South Perth, ready to watch the start of the RSPCA Million Paws Walk.
The weather alternated between showers and sun, but luckily the sun prevailed for most of the walk.


In Western Australia this is the 18th year this event is run, with the aim of raising $250,000 to fight animal cruelty. Sadly cruelty to animals also happens here in this 1st world rich country! I guess there are cruel people everywhere...

Ten thousand people attended the event in Perth, with 5000 dogs participating, and around another 2000 people attended regional events in smaller towns of Western Australia. This event is also held in all the other States.

In Perth, the participants had a choice of walking a 1km, 2.5km or 5km course.
I could see a lot of tired dogs at the end, some even needing to be carried...some were a bit overweight, so they weren't used to the exercise!


There were also lots of tents with food and drinks, a first aid tent for people and a veterinary tent for the dogs. An RSPCA tent sold dog stuff and RSPCA inspectors were on hand to talk to people. Some tents were donating all their proceeds to the event. 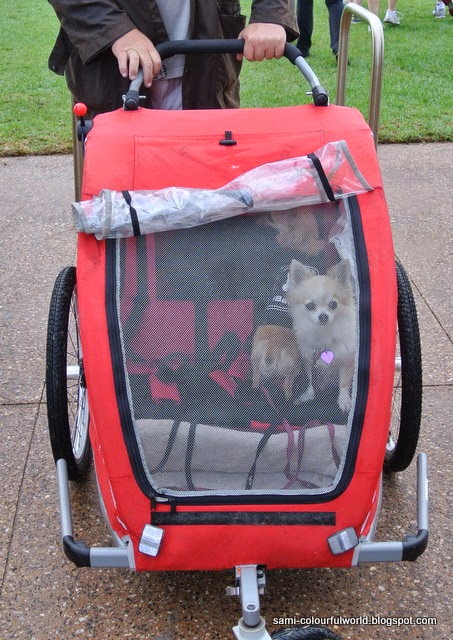 There were dogs in baby prams and in bicycle trailers and some on their owners wheelchairs. 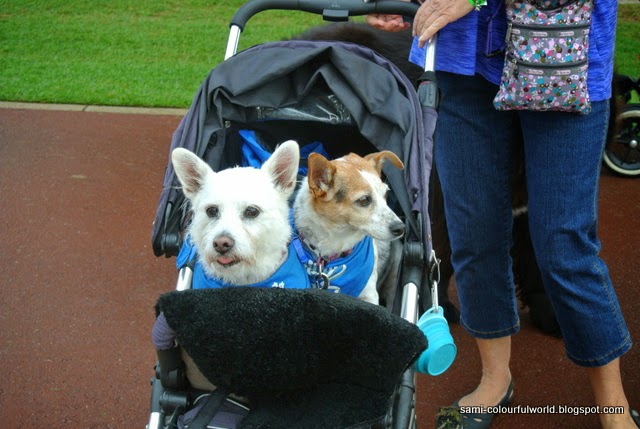 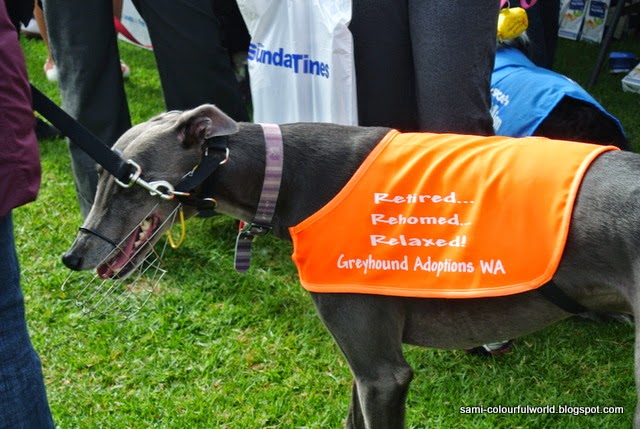 I saw a lot of Greyhounds at the walk. When they retire from racing, most of these gentle animals need to get adopted, and there are a few organizations that deal with this. 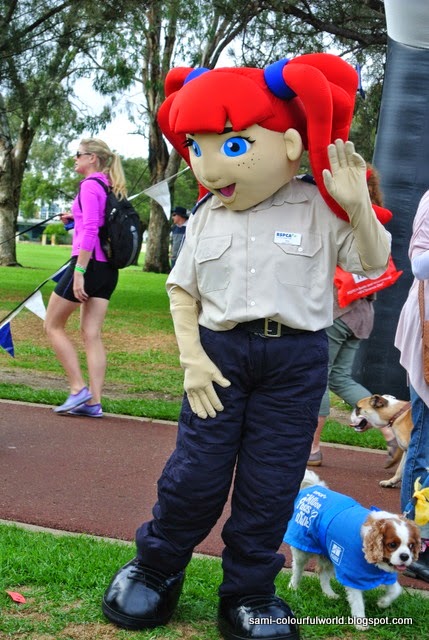 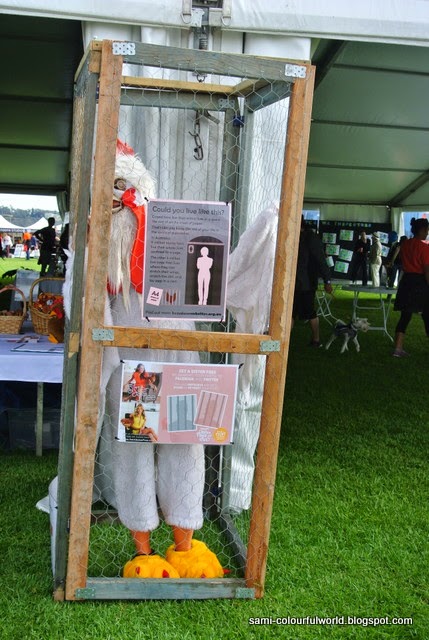 A plea for caged chickens outside the RSPCA tent. Caged chickens live in the space of a A4 page all their lives. There has been an ongoing campaign for a while now to get people to buy Free Range eggs and chickens. They cost slightly more, but they are tastier and the chickens deserve a better life too. 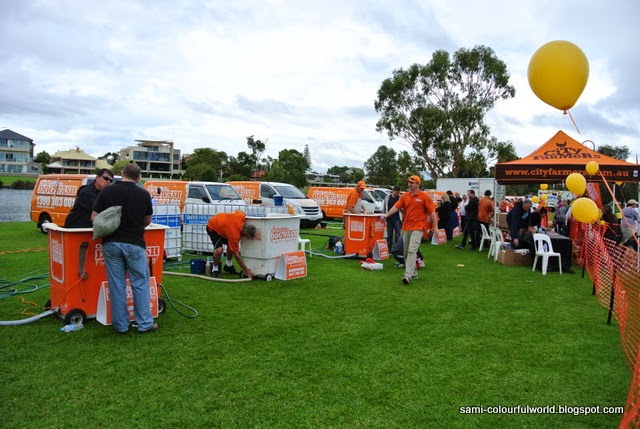 After the long walk dogs could get a wash for $20 from the City Farmers wash stations.

There was a "Dog Dance Demonstration" - which was very interesting and a credit to their trainers. 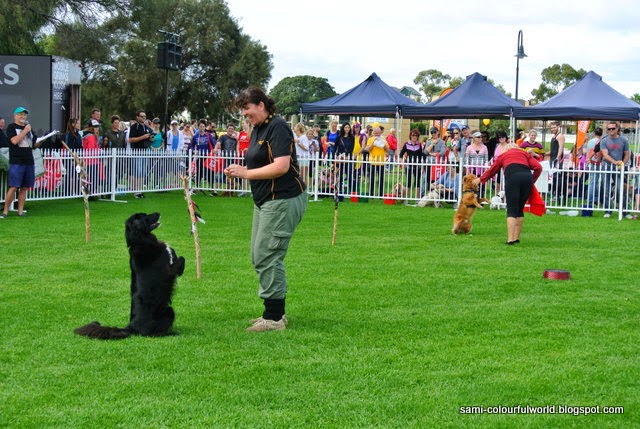 After their win over the Geelong Cats (from Victoria) the previous night, some of the Fremantle Dockers players participated in the walk with their dogs today.

After the walk Matt de Boer (left in this photo with his border collie) who is an RSPCA spokesman, was interviewed on stage about their win and about his love for dogs and the need to protect animals from cruelty. Afterwards the players signed autographs for their supporters.
Sadly by this stage my camera's batteries had gone flat!

There were still a few events to go, but the next event after the Docker's interview was still 40min away, so I decided to go home.
One of them would be the presentation of the prizes to the "Best dressed dogs", by Narelda Jacobs, one of Channel 10's newsreader, which would have been fun to watch. Next year!

It was a fun event for the people and the dogs.  There were so many different breeds, shapes, sizes and colours but the dogs seemed to be on their best behaviour.
Of course I also loved it!!

Do they have this type of event in your town?

In other parts of the world it was either last Sunday, in others it will be next Sunday...

My wonderful son and daughter in law took me to lunch at their favourite Italian restaurant in their neighbourhood.
After lunch we drove to Fremantle and spent a few hours walking around and visiting some of our favourite spots.
It was a perfect Autumn day, with a top temperature of 24C! 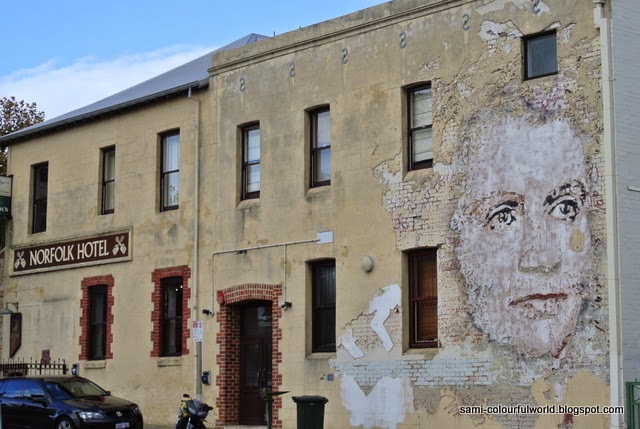 This sculpture on the brick walls of the Norfolk Hotel was commissioned in 2013 by the Fremantle street art festival and done by Portuguese artist/sculptor  VHILS - check his work around the globe.

The next stop was a visit to the Fremantle Markets, held from Friday to Sunday, were I bought some interesting gifts to take when I visit Europe in a couple of months.
There you can get anything from fresh fruit and vegetables to  clothes, art and other original and crafty things. 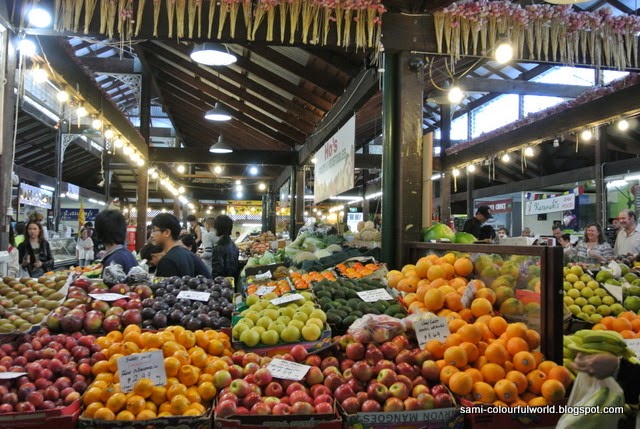 Across the Fremantle markets, this 25mt mural of an Australian numbat, painted by ROA, a Belgium artist. He was also the one that painted a giant mural in Perth city centre in the recent Form festival. You can read about that by opening this link. 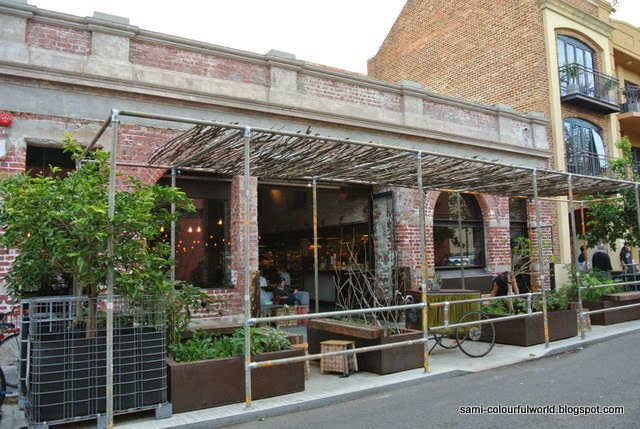 On the way to the parking lot where we left the car we walked past this wonderful bakery/cafe in Pakenham street, called Bread in Common, where they have the most wonderful artisan bread.
Inside, this brick house has been paired back to bare bricks, and has a very industrial and simple look. Outside, next to wooden seats, there's a couple of wooden boxes with fresh herbs and vegetables.


Back at my son's house we had a cup of tea and slice of cake and took this photo to remember a great day.
I hope you too had a wonderful Mother's Day. 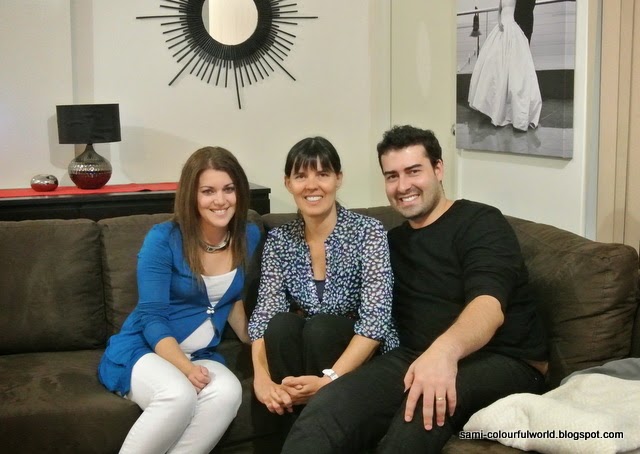 During the week I spent in Adelaide at Easter time, on the 23rd of April, my intention had been to go to the northern suburb of Elizabeth, to see the Royal couple William and Kate, but I realized that it would take me one and a half hours to get there by public transport and by that time I would certainly be no closer to them than if I watched them on TV that evening! I later heard on the news that some people camped there overnight just to be first in line, others were there at 3am!!

Instead I walked around the city visiting new sights since I was last there. 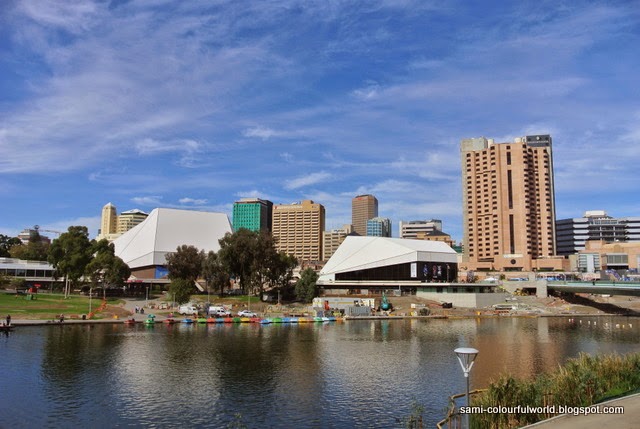 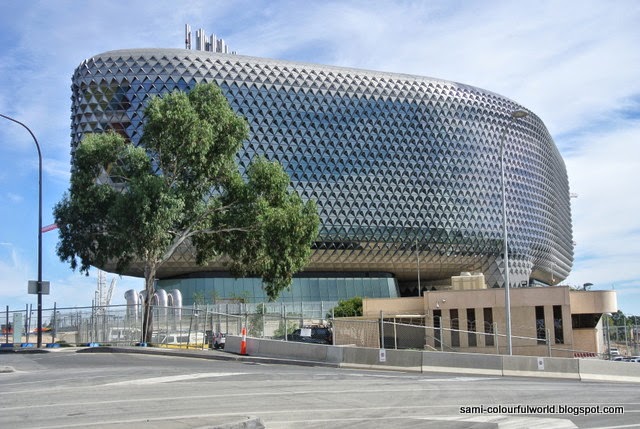 Starting at the west side of North Terrace, the South Australian Health and Medical Research Institute  is a state of the art 25,000 sq metre building that cost $200 million and was officially opened towards the end of 2013.
The curved building is covered with over 6000 double glazed triangles with metal sunshades for optimum weather control. Behind the triangles multiple colours flash out from the transparent glass, and at night when the building is lit it looks like a multicoloured cut-glass brooch.

Walking on the footpath along the river Torrens towards the East side I then climbed the stairs leading to the grounds of the University of South Australia. 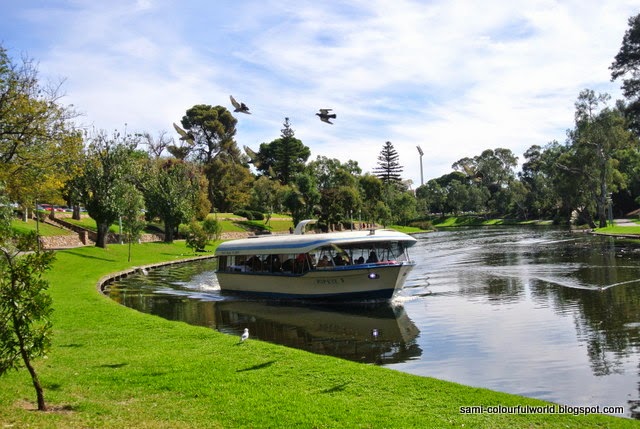 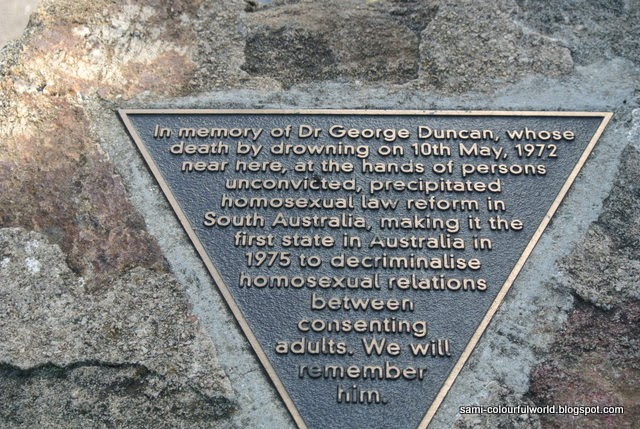 Atop the stairs at the south end of the University bridge,  I saw this plaque commemorating the drowning of Professor George Duncan in the River Torrens. There has never been a conviction of his murderers (presumably members of the Police force), but this brought about reform for the acceptance of the gay community. 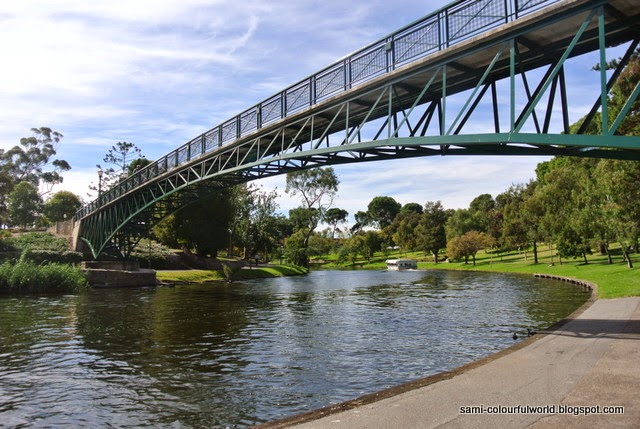 Next to the University buildings are the Art Gallery of South Australia, the the South Australian Museum , and the modern State Library.
All are located on North Terrace, and entry is free  (you can donate a gold coin if you wish) and they are open from 10am to 5pm.
The current exhibition  at the Art Museum, was the "Adelaide Biennial of Australian Art - Dark Heart" which runs until 11th May.

Just outside the Art Gallery was this black half buried house that was part of the exhibition, by Perth artist Ian Strange , a replica of his Perth childhood home. 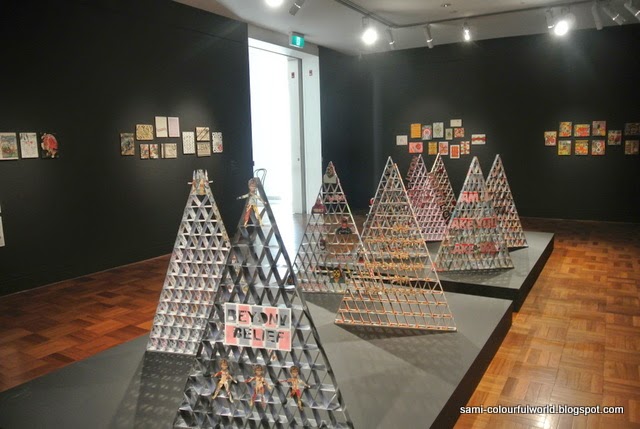 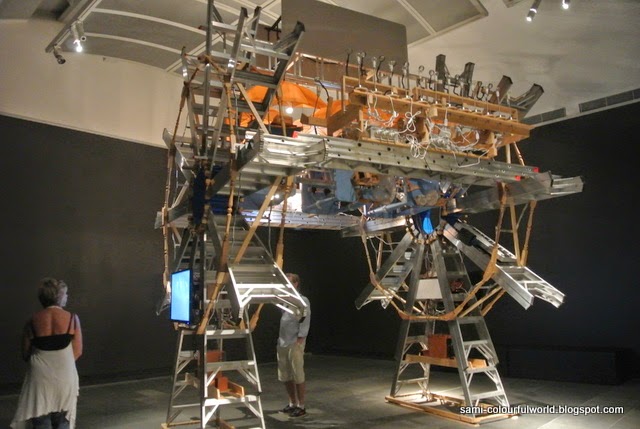 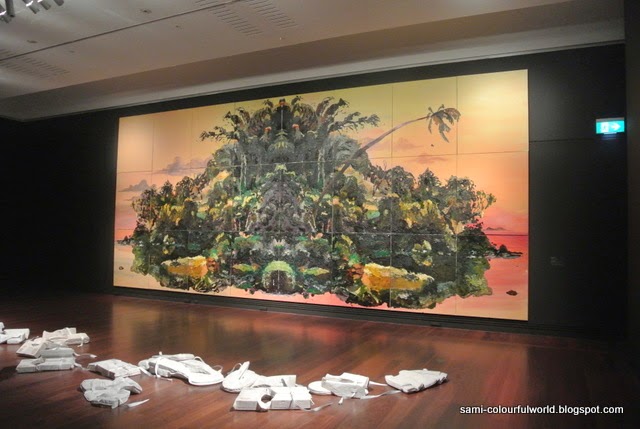 "The Island" this huge painting by Sydney born Ben Quilty , winner of the Archibald prize 2011 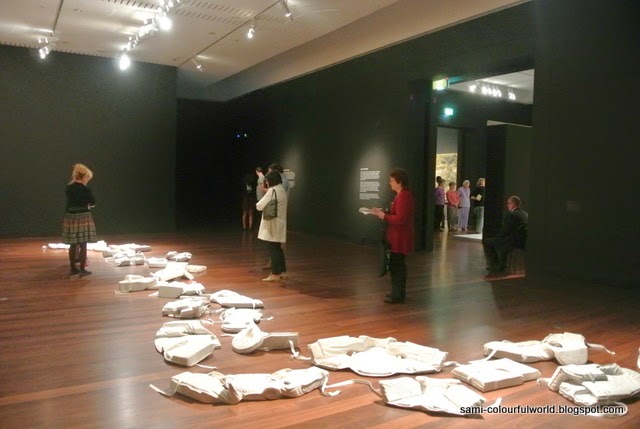 This poignant work entitled "Someone died trying to have a life like mine" by Alex Seton, refers to an incident when 28 life-jackets were discovered washed up on Cocos Island, off the coast of Western Australia in May 2013. They are carved out of Wombeyan marble and each one is different. 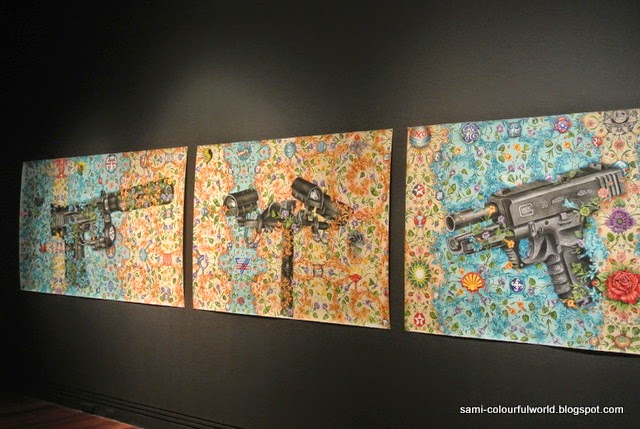 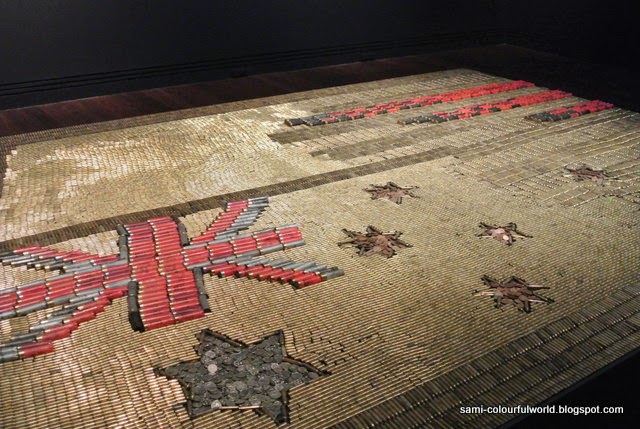 Ex deMedici, a former tattoo artist, is the artist behind the works in the above 2 photos.
On the wall "The Law", represents firearms in a Persian inspired rug and logos of Western multinationals.
The one on the floor is made up of bullet cases, bullets and coins, with the flag symbols of England/Australia  on the bottom corner and the Stars and Stripes flag symbol of the USA on the top corner. 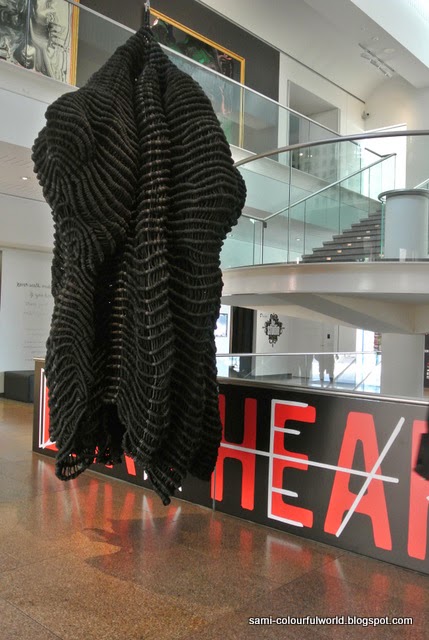 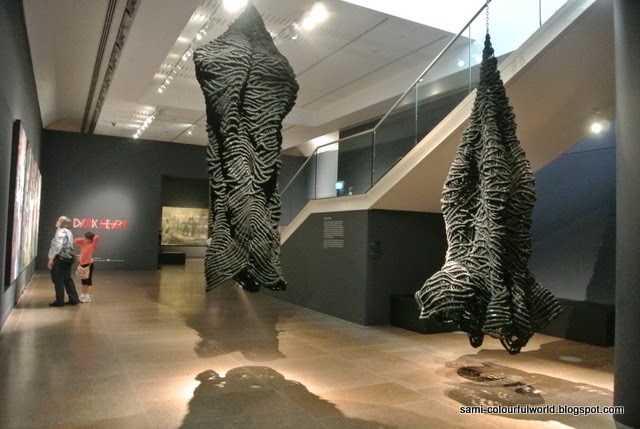 Woven in synthetic rope, leather and rubber, these huge suspended sculptures titled "Armour" were inspired by the Samurai armour, and were done by Spanish born artist Dani Marti, who is now based in Sydney. 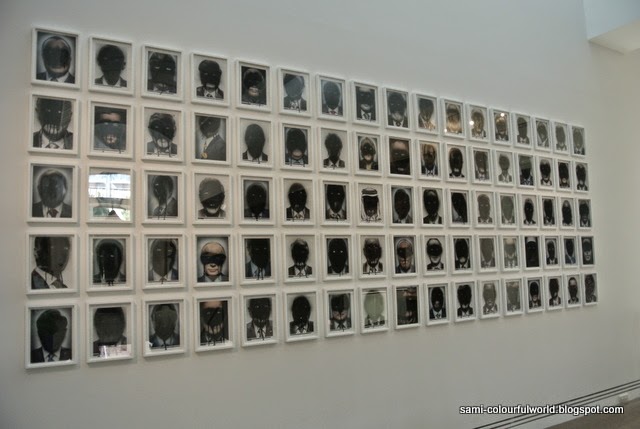 "Mob Rule" by Melbourne artist Tony Garifalakis comprises of 85 defaced portraits of world leaders, like evil villains and anti-heroes, contesting the accumulation of power and the status quo. 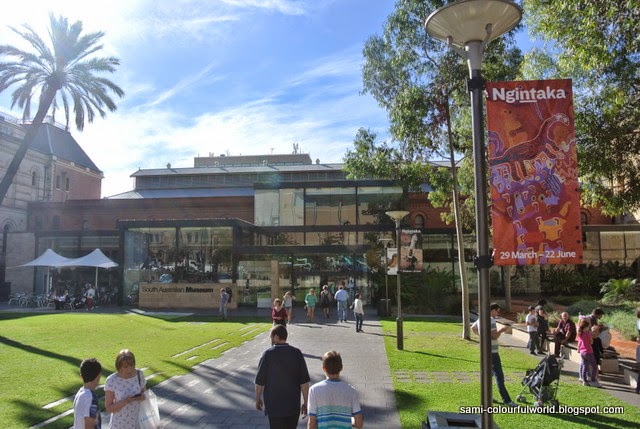 Next door to the Art Gallery is the Museum, where I popped in for a quick tour.
The modern glass facade contrasts with the brick original building indoors.
The wild animals from the various continents, the minerals, etc were very similar to the exhibits in the Perth Museum. 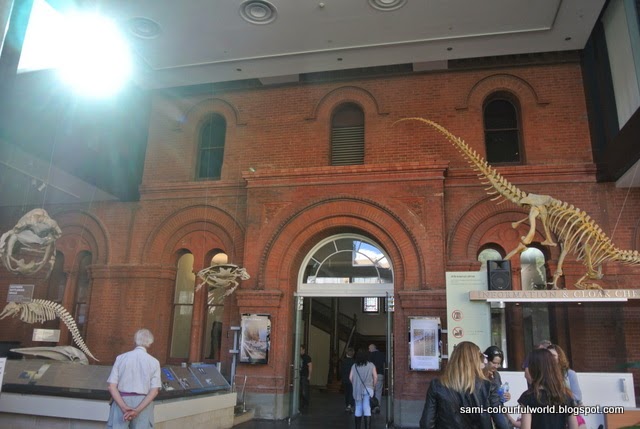 Hope you enjoyed the tour of Adelaide and the Art exhibition.
Posted by Sami at 00:51 9 comments: