Today it's not murals, but some interesting public art works around the suburb of Victoria Park.
The steel swan and kangaroo on the corner of Albany Highway and Duncan street stand in front of the Victoria Park post office.
Created in 2012 by Fremantle sculptor Greg James, "Penny and Pound" - the swan and the kangaroo, are named after the stamp emblems in the early 1900's, when the Vic. Park post office was built.
Remember the dog "Blondie" in Fremantle? The same style, the same sculptor! 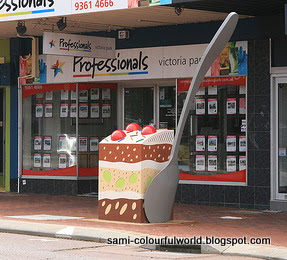 On the corner of Albany Highway and Harper street, this very cool movie reel extends into a bench.
"The real seat", made of steel, aluminium and sandstone, by Afghan born Mehdi Rasulle, stands in front of a former movie theater that closed in 1964. The building now houses a business center. 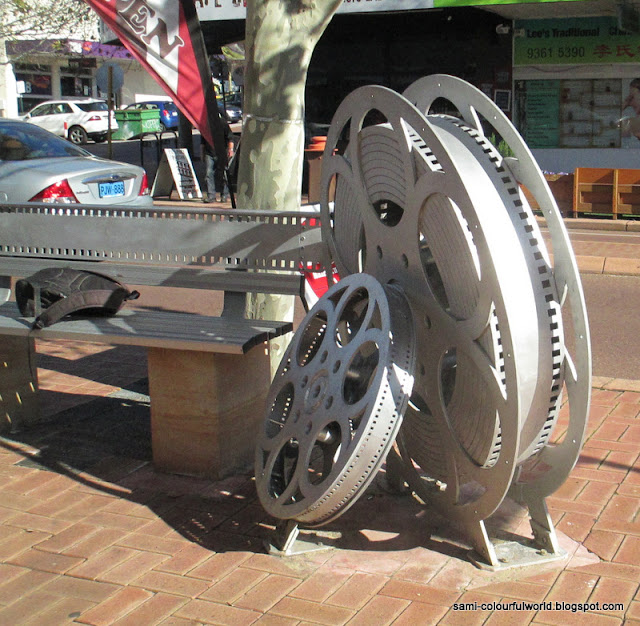 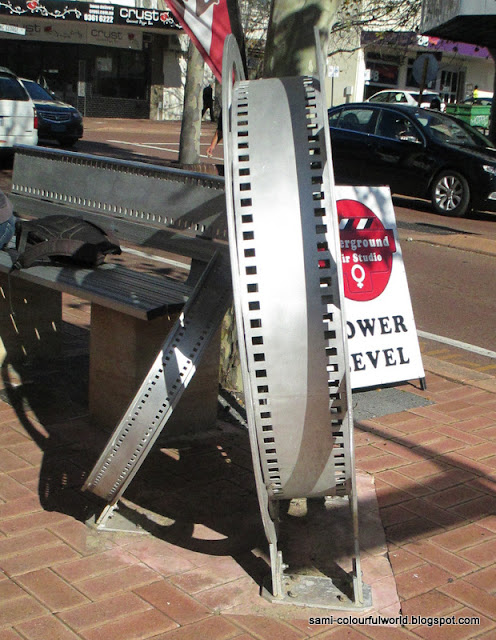 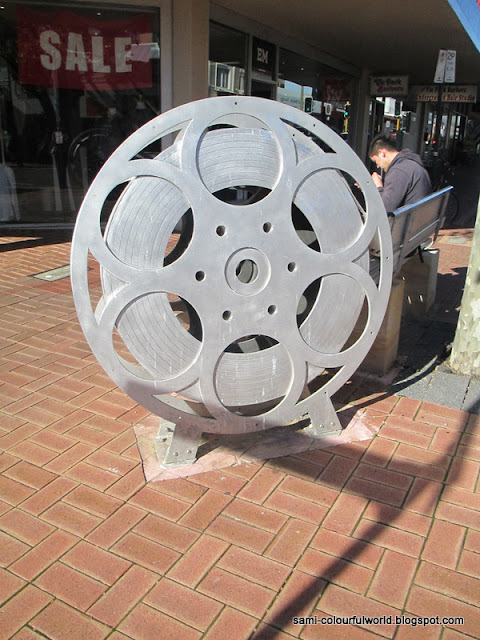 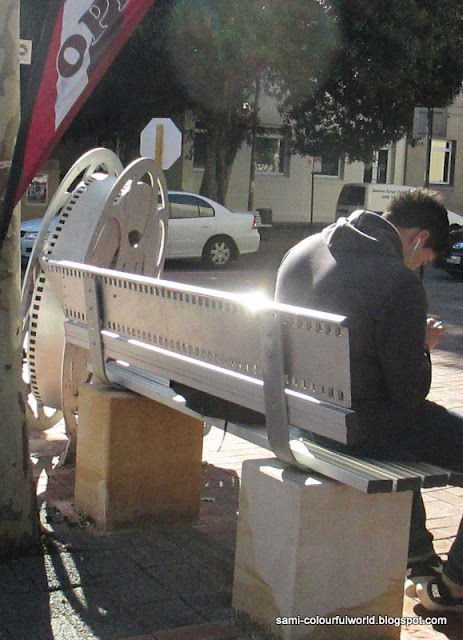 Did you enjoy these artworks? Hope you're having a wonderful Sunday!

A few more photos of murals taken in the suburb of Victoria Park.
You can see Part I and Part II by clicking on the links. 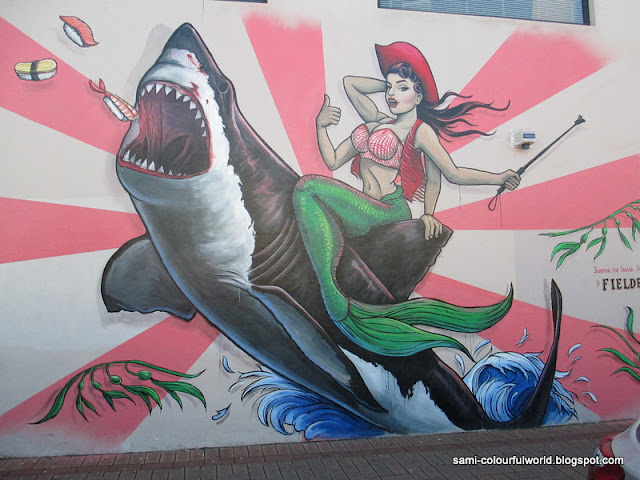 Painted on the side wall of a unique gift shop "The Good Store" at 363 Albany Highway, this beautiful mural got the thumbs up from the store owner.
"Jumping the shark", painted by Fieldey and James Giddy, both Perth based artists, was painted for the 2015 Form.

Fieldey, a New Zealand born artist, moved to Perth in 2007, and started painting her own surfboards when she learned to surf. She also paints murals and other things under commission. 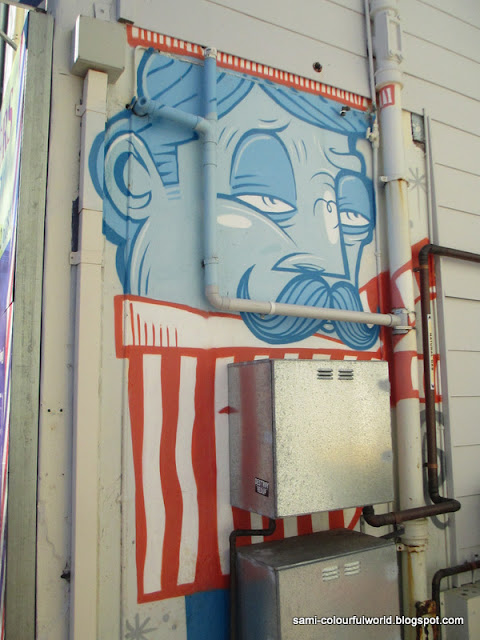 A small mural on a side alley painted by "The Yok" who has another mural in Victoria Park (in previous post). 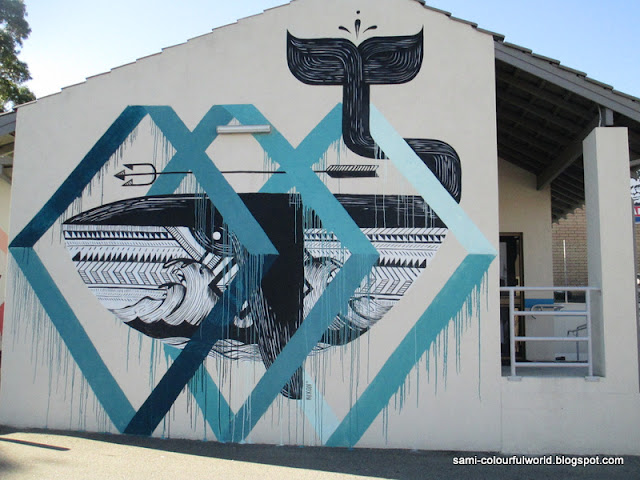 Painted by Perth illustrator Chris Nixon, at 1 Harper Street. There was a similar one on a wall to the left painted in orange tones, but there was a car parked right in front of it which obscured the view. 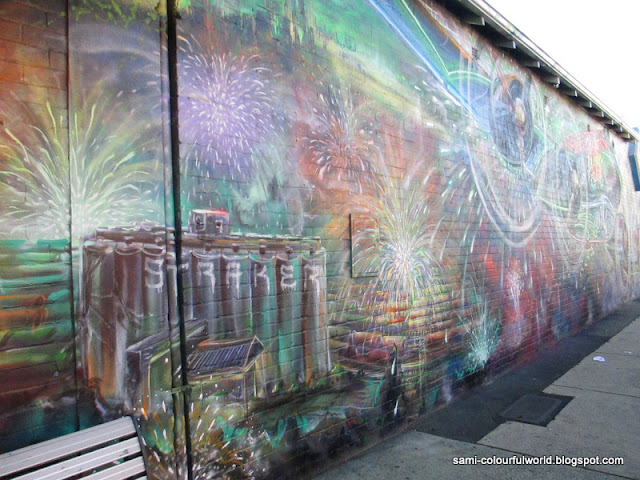 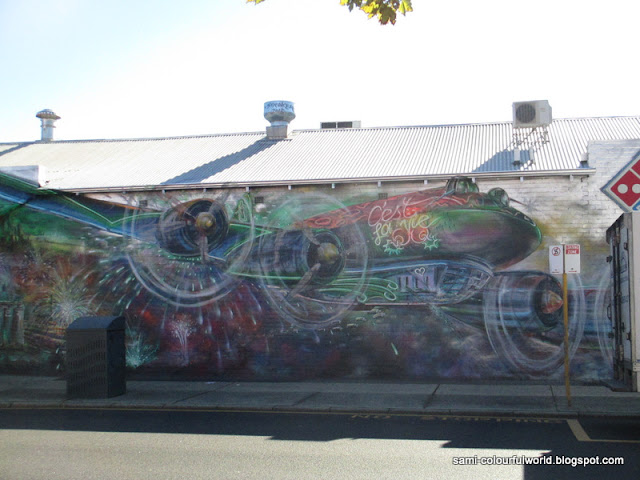 The large wall above painted by Drew Straker, another Perth graffiti artist who uses the "neon glow technique" in his artworks. You can see that in the first photo with the fireworks, to the left of the jet plane. This one can be seen on the side wall of Domino's Pizza at 410 Albany Highway corner of Duncan street.


Hope you enjoyed these murals. For me the first one by Fieldey/Giddy is quite striking, but the last one by Straker "feels" more artistic. Which is your favourite?

Following from my previous post, here are a few more photos taken in Victoria Park, of murals painted along Albany Highway. 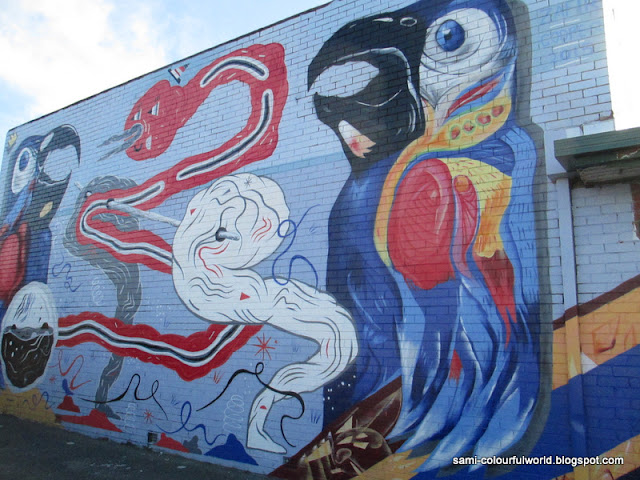 The above from Australian artists James Cooper aka Jerkfvce and Nick Zafir represents a giant bird between two macaws entitled "Lucy and the Imposter" was painted for the 2015 Form, painted in a laneway next to 855 Albany Highway . 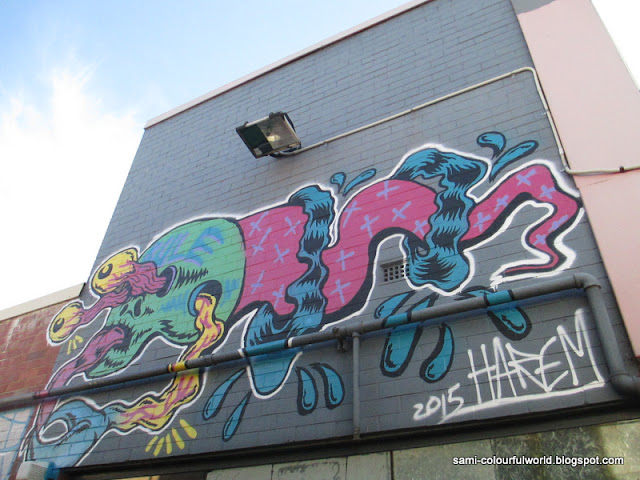 This one is signed Harem 2015, but I couldn't really find anything about it anywhere. Not to my taste either... 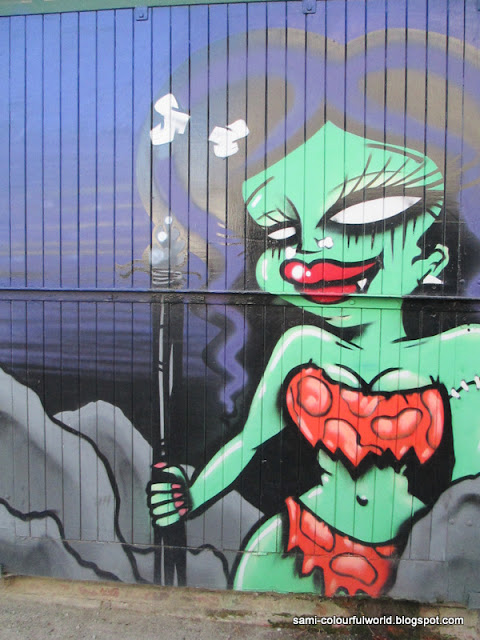 Both of the above "ladies" are from Lady Poiz, couldn't find anything about this artist either, the "Green lady" is next to a bottle store in 855 Albany Highway. 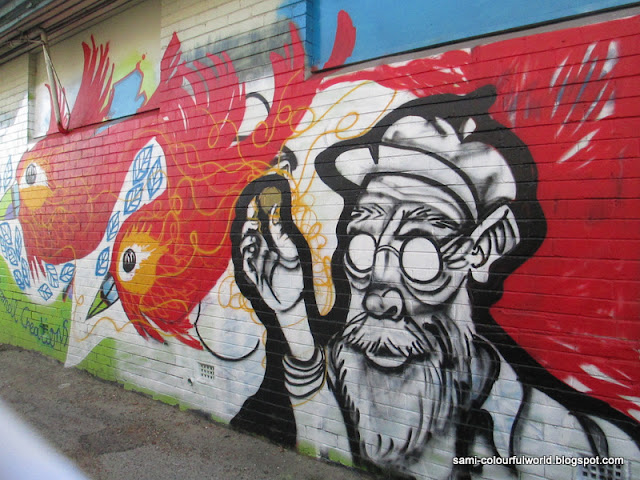 A colourful one, but couldn't find the name of the artist either...

Some more pics to come in the next post.
Have a wonderful weekend.

I went to the suburb of Victoria Park, south east of the city centre, with the intention of photographing the murals painted during 2015's Form, that took place from 6th to the 19th April.

Armed with a Form map for the Victoria Park works, I started in one area with the intention of going all the way to the city. Most of these murals are in Albany Highway - a main road that passes through Victoria Park, 405km long road from Perth to Albany in the South West.
After 5 or 6 murals my battery ran out! In the meantime I managed to mostly photograph works painted in 2014. I hope you like them and I will return to photograph the 2015 murals soon. 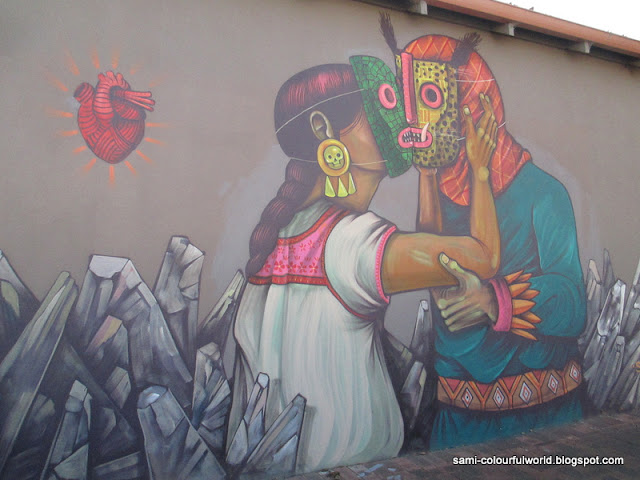 This one painted in 2014 by Edgar Flores aka Saner, a Mexican artist displaying all the colourful Aztec colours. Located on the wall of "Food for me" restaurant at 877 Albany Highway, corner of Canterbury street. 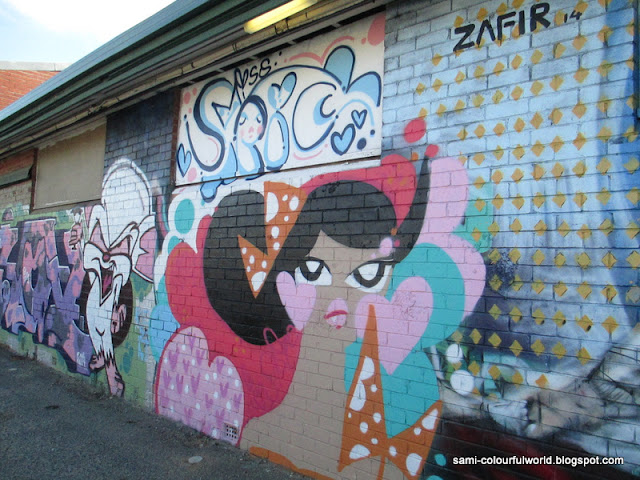 Nick Zafir, a Perth based artist also painted the above wall in a laneway in 2014. 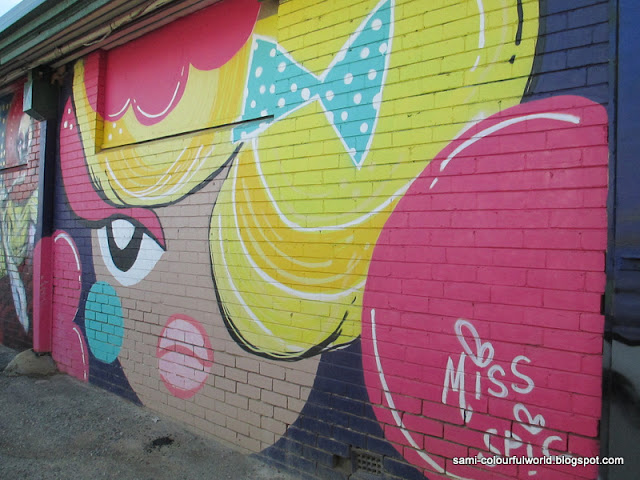 A local artist, Miss Spic, painted this "Retro girl" at the request of a business owner avoiding graffiti. 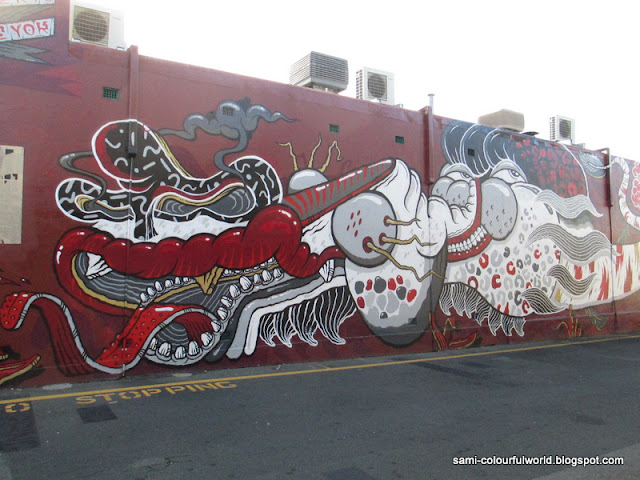 Another 2014 wall, entitled "Falcor", painted by Singaporean artist Sheryo & Perth artist The Yok, now based in New York. Their work is Asian inspired as you can see above.

And the next one is not a mural, it's a  bicycle repair station!
Funny thing, I'd never seen one before...couldn't really figure out, probably because I'm no biker, but it had all sorts of small tools hanging... 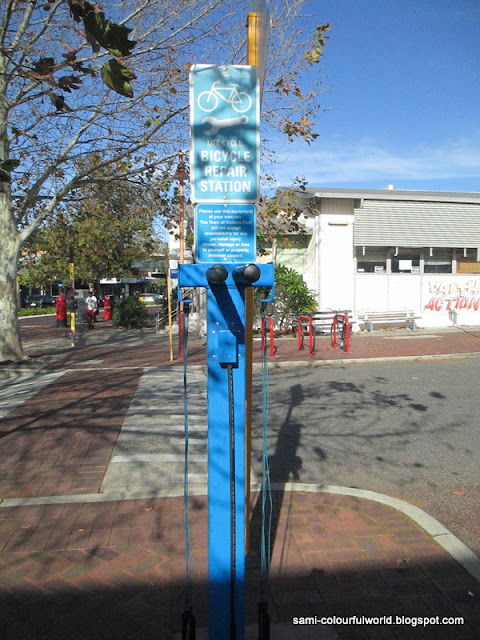 The following photos were taken a few weeks ago on a day out in the suburb of Northbridge, just north of Perth's city centre. 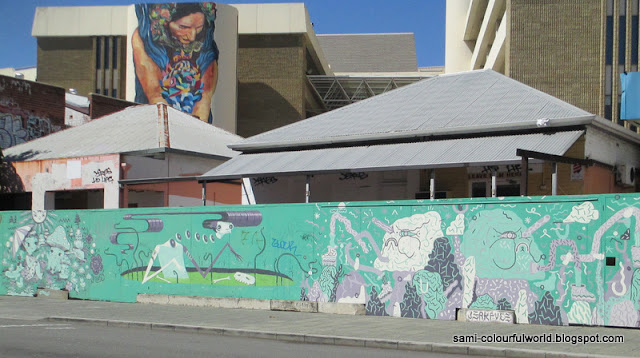 This green wall in William street, behind TAFE (educational and training college) has 3 different murals.
The one in the centre, with the "quirky aliens" was painted by Perth artist Martin E Wills or MEW, the one on the right side is by New York artist Jerkface.

On the tower of the Tafe building you can see a huge piece by Argentinian artist Nicolas Romero known as Ever. 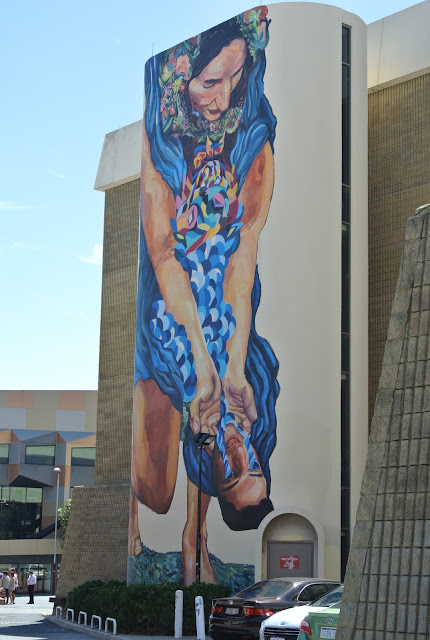 Another mural on the corner of Newcastle and William street, was painted  in 2012 by Lauren Nannup and Stephen Genovese, and is entitled "Red and White tail cockatoos" 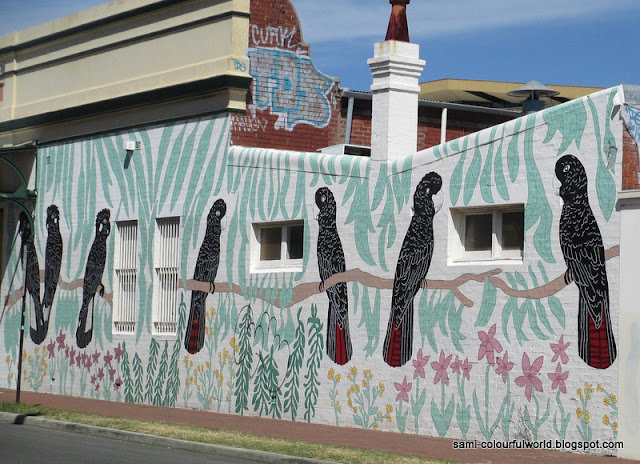 These next ones were taken in a carpark in Abeerdeen Street, also in Northbridge, when we went out to dinner with friends to the Darlings Supper Club, a modern Asian fusion restaurant.
This mural was painted by Chris AKA Royaldog, a Korean artist.
(sorry not great pictures, but they were taken with my phone at night) 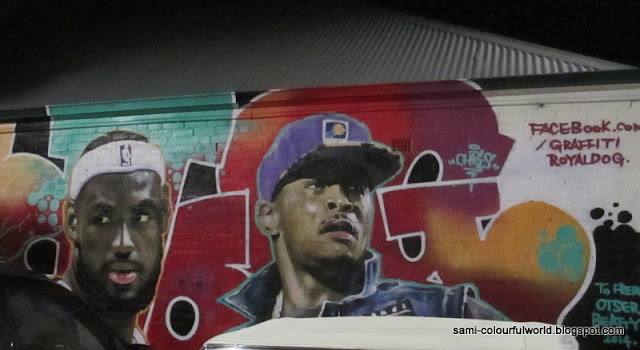 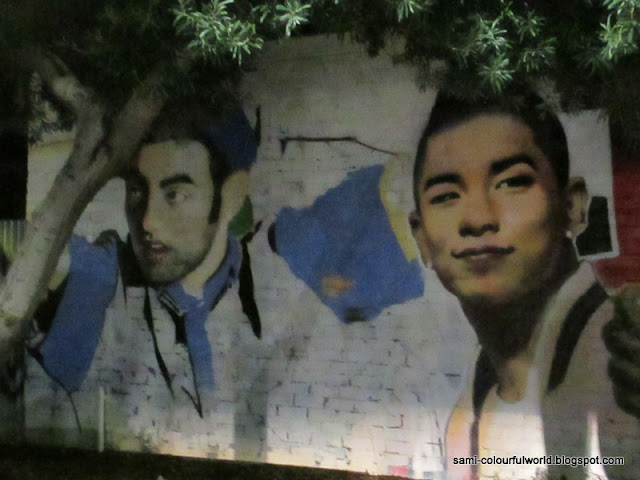 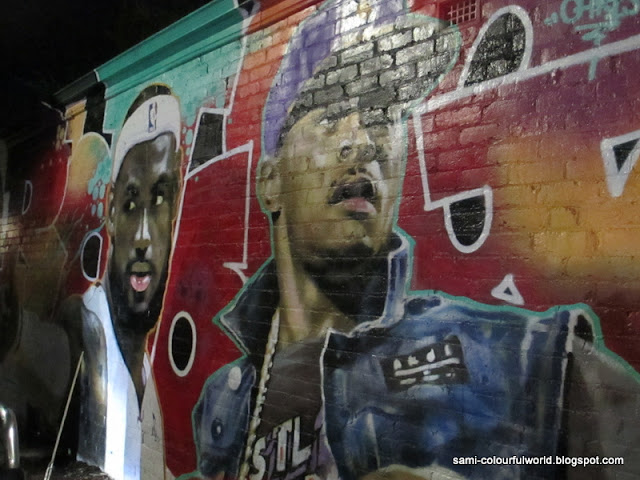 Have a wonderful weekend.
Here in Perth we're having a sunny weekend, which means some gardening. Will have to show some pictures of our progress in the garden renovation...

My husband and I have been trying to eat a low-carb and grain free diet, mainly so he loses weight and keeps his blood sugar and cholesterol under control.
So no potatoes or his much beloved rice is on the menu, but once in a while I have to relent.
On Friday we went past a fish shop that had an amazing choice of frozen fish and we bought 2kg of octopus, something I don't easily find in my shopping area.

It would be for Saturday's dinner, and my husband suggested I make an Octopus salad, but that's very much a summer dish for me, so I suggested "Polvo a Lagareiro" - Grilled Octopus and potatoes in olive oil - just the right recipe for the colder nights we're having.

Since it would be a special dinner I invited our son and daughter in law to dinner, and they were surprised that we were having real potatoes and not a "potato substitute" like cauliflower.

Try it out, I'm sure you will love it, even though you might think octopus is weird.


Preparation:
Boil the frozen octopus in a pot with one peeled onion. No water needed, as the octopus will shed water). I used the pressure cooker and as soon as it started whistling I removed it from the stove.
Let cool and then cut up into small pieces.
(If not using a pressure cooker, cook in an uncovered pot with water and the onion until the octopus is tender). Octopus shrinks a lot after cooking.
Warm the oven to 180C.
Wash the potatoes (I used normal potatoes suitable for roasting as I couldn't find small ones), put them in an oven tray, prick with a fork and add salt. Cook them in the oven for 30 minutes.
Remove tray from oven, and if potatoes are soft give them a punch with your fist. I used a wooden spoon over the potatoes to punch them so as not to burn my hands. (These are called "Batatas a Murro" or Punched potatoes).
Next, put the octopus pieces with the potatoes, a bit of salt over the octopus, add a chopped onion, and minced garlic. Drizzle with olive oil. Put back in the oven for another 10 to 15 minutes.
Remove from the oven and serve. You can sprinkle the tray with chopped parsley or coriander if you wish. Serves 6 to 8 people. I accompanied with boiled broccoli.
PS - "Lagareiro" is the man who produces olive oil.
We couldn't finish the meal without a dessert of course - but this one was a low carb one!
No bake Cheesecake with a berry syrup. Yummi!!

Here is the link for the recipe - I made my syrup with raspberries instead of blueberries.
Note - I used powdered stevia as a sweetener and used less quantity in both the cheesecake and the syrup.