A colourful mural by AkaCorleone not far from Senhora do Monte Viewpoint, at Rua Damasceno Monteiro in Lisbon, an area which can be reached with the very popular Tram 28.

AkaCorleone is Pedro Campiche (born 1985), a visual artist of Portuguese and Swiss descent who started out as a graffiti writer in the underworld of his native Lisbon.
This piece was given the name "Unrest" and represents Fernando Pessoa, the Portuguese poet, writer, publisher and philosopher (1888-1935) in a psychedelic dream.

If you like murals or have a mural you'd like to post, this meme is for you;
Just follow the Linky steps below.   Be sure to link back to this blog and visit your fellow posters.  Looking forward to your mural finds this week. 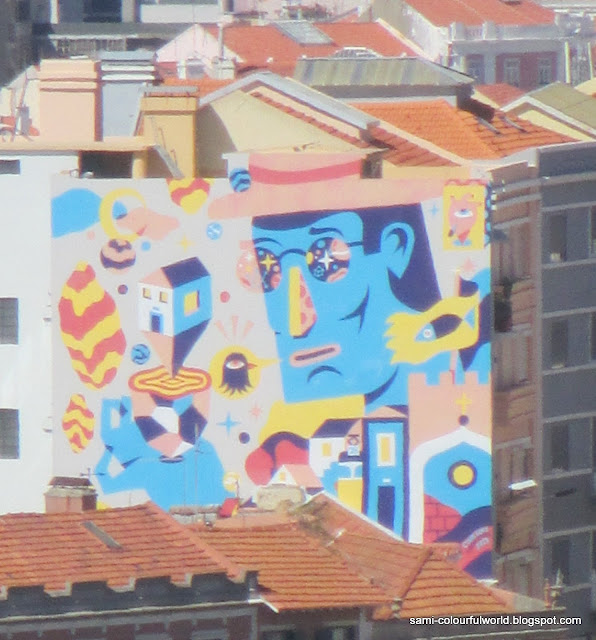 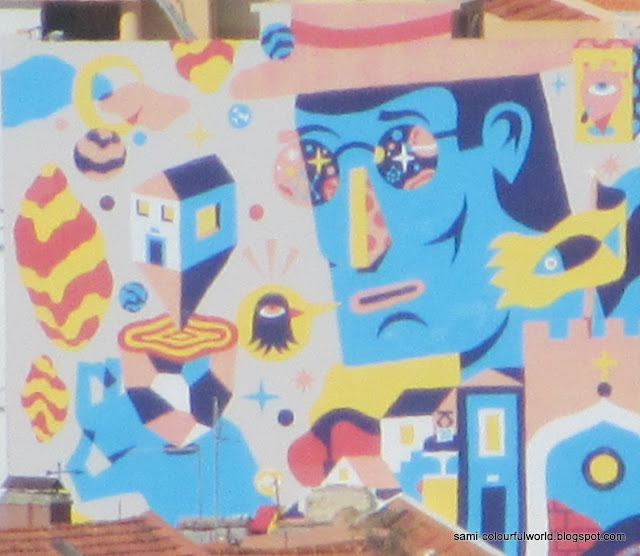 
🎅Wishing all my readers, followers, friends and family a wonderful Christmas and all the best for 2019🎅

I won't be posting the "Monday Mural" next Monday 31st December , but will be back to normal from the 2nd of January 2019.

I leave you with some of the dozens of Christmas decoration photos taken during my holiday to the Philippines.

A cute bulldog painted by New Zealand artist Mr G (Graham Hoete) on a street leading to Bondi beach in Sydney. Photo taken on my last visit to Sydney in October 2018.


Just follow the Linky steps below.   Be sure to link back to this blog and visit your fellow posters.  Looking forward to your mural finds this week.  Thanks, Sami.

I'm travelling, so will try and visit you as soon as I'm able to.
Back home next week :) 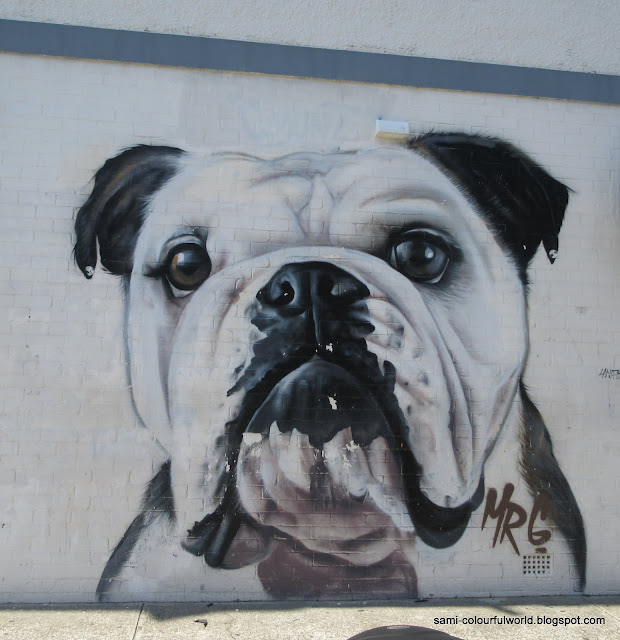 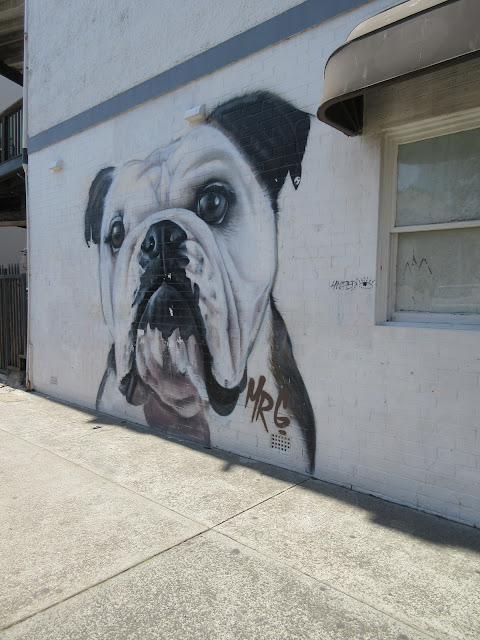 I captured this mural when I attended a gardening workshop in March at the Bentley Library, in the suburb of Bentley, not too far from my workplace.
Forgot about them until I drove past that road again recently.
Painted by Brenton See, a local artist who loves painting birds.

If you like murals or have a mural you'd like to post, this meme is for you;
just follow the Linky steps below the photos and  don't forget to visit your fellow posters.
Looking forward to your mural finds this week.  Thanks, Sami. 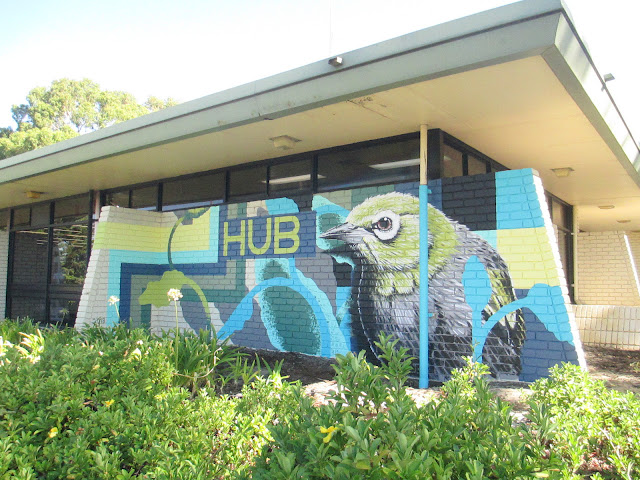 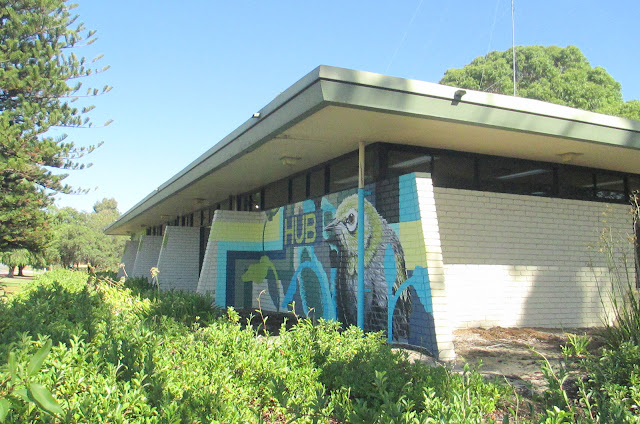 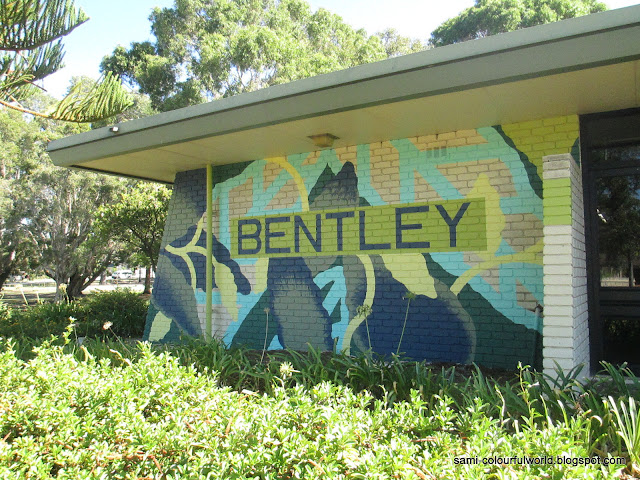 
Saturday 17th - I accepted an invitation to go to the movies to watch the film Bohemian Rhapsody.
Just as Catarina had mentioned a couple of weeks ago, the movie was brilliant and the lead actor Rami Malek deserves to win an Oscar for best actor, he was fabulous!
I love Queen's music, so if you're also a fan go and watch it 👍

Sunday 18th -  I joined around 40 other Portuguese men and women at a Codfish Academy lunch at Eat Greek Restaurant in East Fremantle.
The Codfish Academy was founded in Johannesburg, South Africa in 1968, and the Perth branch was inaugurated in 2011, and is the only one in Australia. Funds that are later donated to charity are raised from these lunches or dinners.

After a generous and delicious Mediterranean buffet lunch, I drove around Fremantle taking some photos and came across a few new murals.

When I got home, and got the Christmas stuff from the garage and set up the Christmas tree.
I usually only set up my Christmas tree on the 1st of December, but because for the next 2 weekends I would be busy I put up the tree when I arrived home. This year I've gone for white and silver instead of the usual blues.

Thursday 22nd - After work I drove to the suburb of Applecross not far from where I work to take photos of the jacaranda trees. Applecross is famous for its annual Jacaranda Festival at the end of November. I was a bit disappointed that this year they weren't as "bloomy" as in previous years.

I was pleased to see "Waiting in the wings" that I first saw at Sculpture by the Sea, in Cottesloe Beach this year, on the Applecross waterfront framing Perth's skyline in the distance.
The sculpture which took 12 months to complete, was done by Perth's sculptor Denise Pepper, is 3,3mt tall and each wing weighs about 170kg each.
Doesn't it look as if it was made for that spot?

Applecross also happens to be one of Perth's top suburbs with superb houses by the Swan River. One day when I grow up I would like to live there 😃

Later I drove to the Domestic airport to pick up my husband who was coming from Sydney to spend a few days at home. His flight was meant to arrive at 6,40pm and it was close to that time when I parked outside the recently opened Direct Factory Outlet (DFO) just a few minutes away from Terminal 4.
I usually wait for him to give a ring as soon as he's outside the terminal, but I waited, and waited, and waited...and eventually checked the flight website and it showed the flight was 1 hour late!  Silly me, why didn't I check at home?
So I entertained myself with taking photos of the almost full moon (on 23rd) going through heavy clouds.
One hour later Jose arrived, rang me and I drove to the terminal


Friday 23rd -  an early day starting with dropping Jose's car at the dealership for a service. I followed him so we could return in my car and go to Carousel shopping to buy him some clothes for our daughter's upcoming wedding in the Philippines.
Upon our return home we called our grandchild who turned 2 that day.
Then Jose mowed the lawn and started pruning some trees. When the dealership called to say the car was ready I drove him there and we returned home.

At night we drove to the city to go and have dinner at Santini's restaurant (remember the QT Hotel from my Open House visit?).

Our wedding anniversary was on the 30th November and since Jose wasn't going to be here I thought we could have an early celebration dinner.
It's obviously the In place now as when I called at 5,30 to book for dinner I was told it was fully booked for 8pm but they could offer me a table at 9,30!
I accepted it as I really wanted to go there. We arrived a bit earlier, had drinks at the Rooftop bar, the only available seats were at the outdoor area, the view was great but it was a bit windy to be out there.
Dinner was fantastic, food spectacular, service was good too, on the expensive side of course, but it was a special occasion. After dinner I still managed to take photos of some Christmas decorations in the city.
I didn't take any photos of the food, but I was embarrassed to do so in such a fancy place.

Saturday 24th - Jose carried on with getting the garden in order, while I made some snacks to take to my son's house for our grandson's second birthday party at 3pm.
Their house was full of little kids from the playgroup he's been attending since he was a couple of months old.
At 7pm after the party, we had intended to go back to the city to do the Christmas light trail, but Jose was tired from all the garden work so we had a quiet night watching a movie.


In my son's neighbourhood someone puts up a big show of Christmas lights with reindeers, sleigh, photo booth snowmen, stars, the roof is illuminated, etc.
He seems to be the only one in the street, but there are some suburbs where the whole street takes part and loads of people drive around looking at the illuminations and contributing coins to a charity of the street's choice.
When we left close to 7pm the lights were already on. 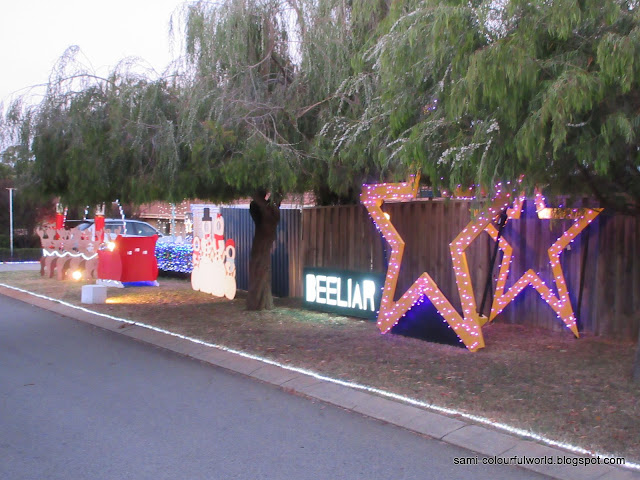 Monday 26th - I had taken Monday off work and at 2pm drove Jose to the airport for his flight back to Sydney.

Thursday 29th - coffee with former work colleagues at a coffee shop near work.

Friday 30th - Our 38th Wedding anniversary - lots of messages and calls, but with Jose in Sydney, sadly I spent the day on my own. Hopefully next year he will be working back in Perth.


And so ended the month of November.
Hope your month wasn't as busy as mine.

Photos of this mural were taken when I went strawberry picking on a farm north of Perth at the end of September.
My friends and I stopped for lunch at the Wanneroo Markets where I spotted lots of fantastic murals all over the building, some in a room used for private functions and others on an outdoor patio.
If you like murals or have a mural you'd like to post, this meme is for you;
just follow the Linky steps below and  don't forget to visit your fellow posters.
Looking forward to your mural finds this week.  Thanks, Sami. 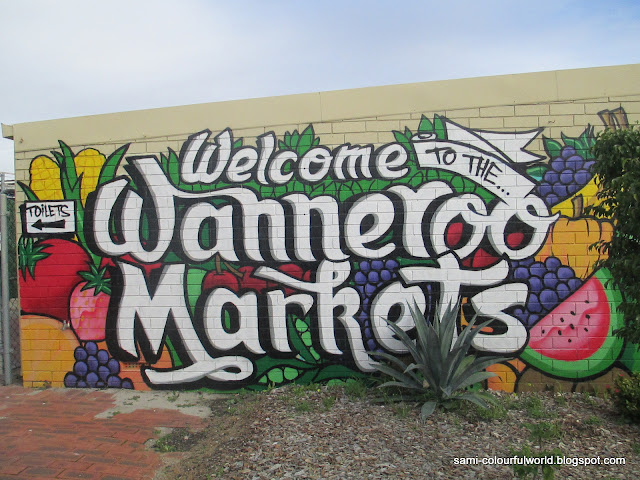 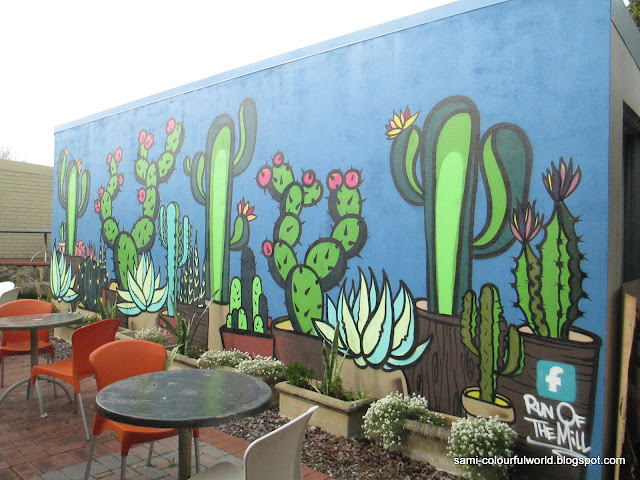 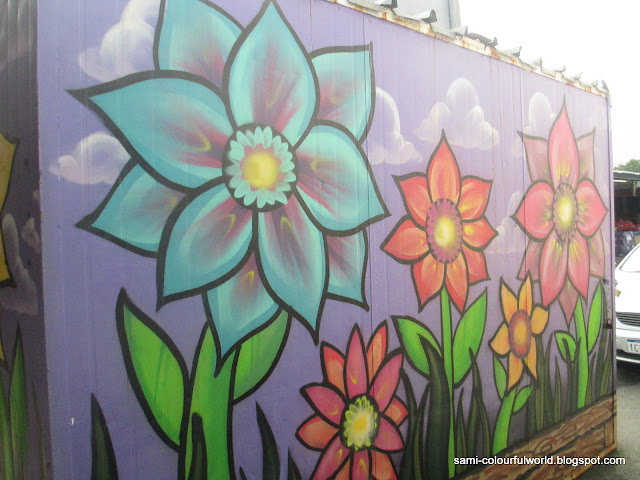 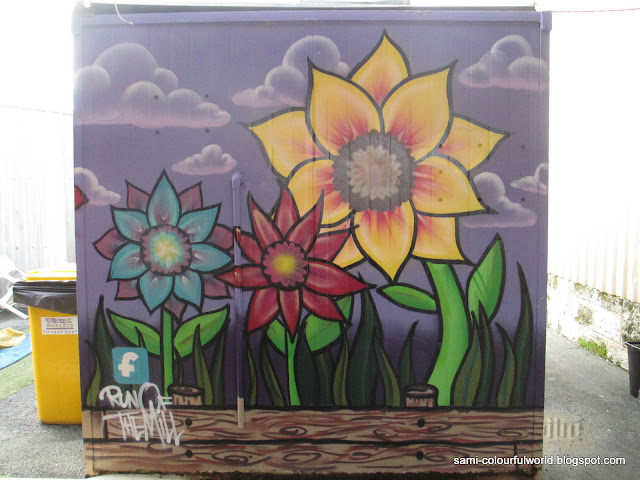 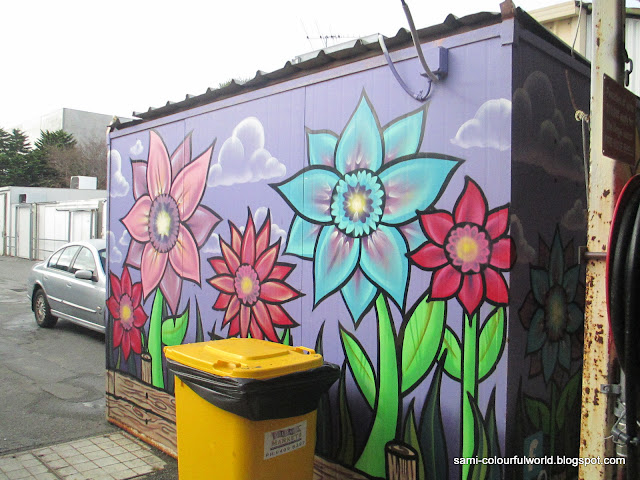 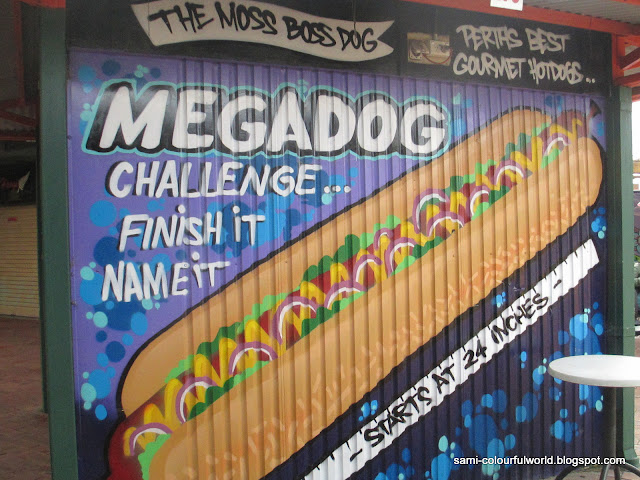 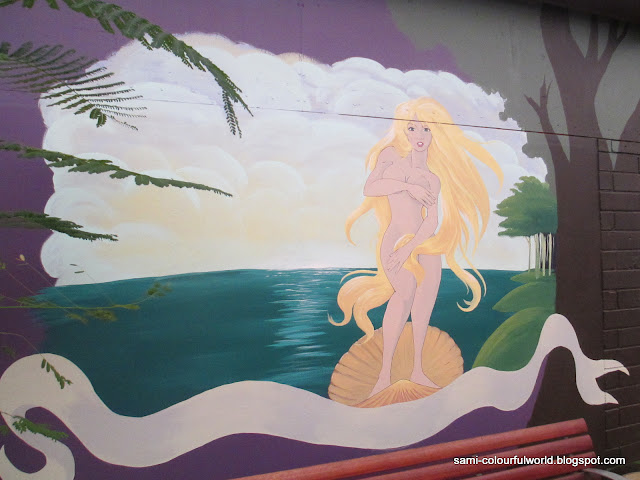 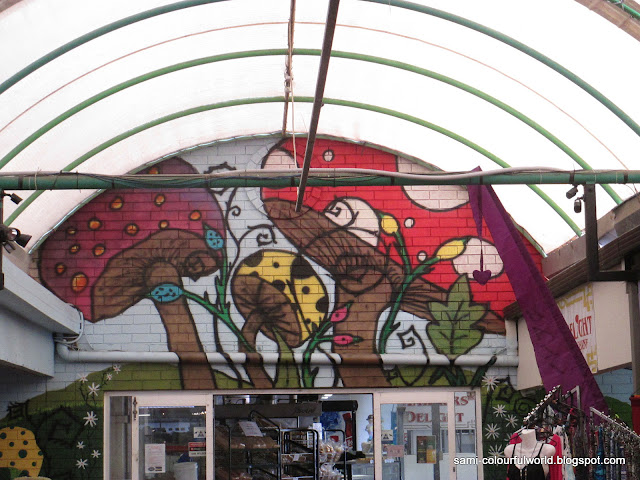 The following murals were at the private function room, painted by Run of the Mill: 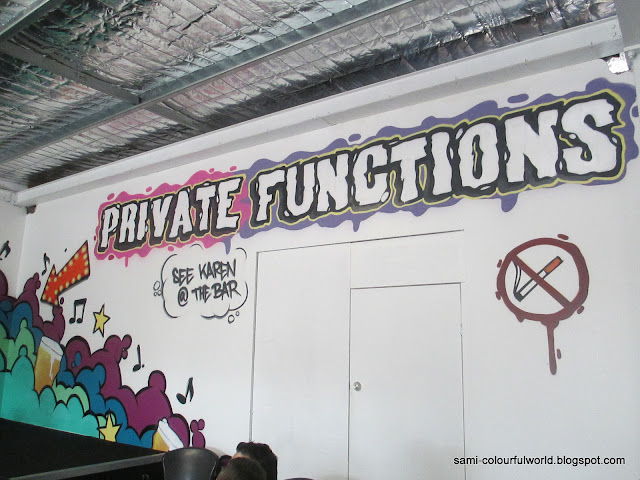 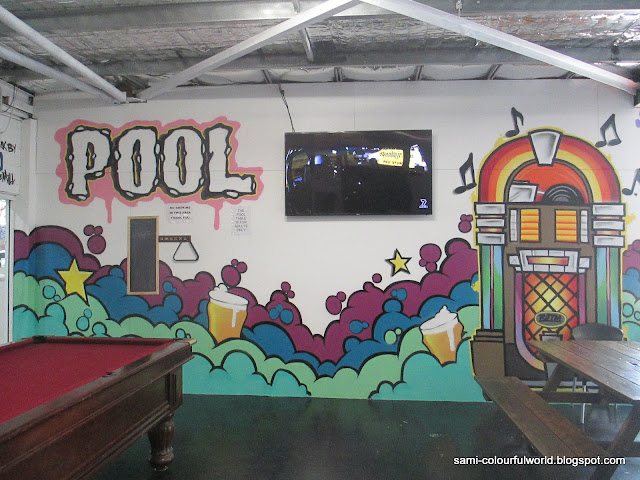 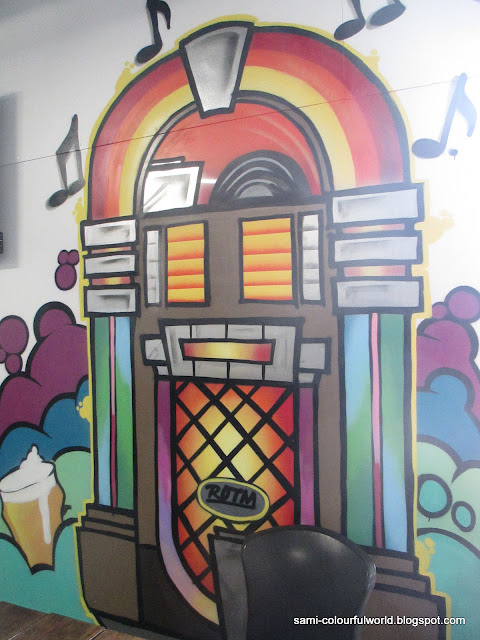 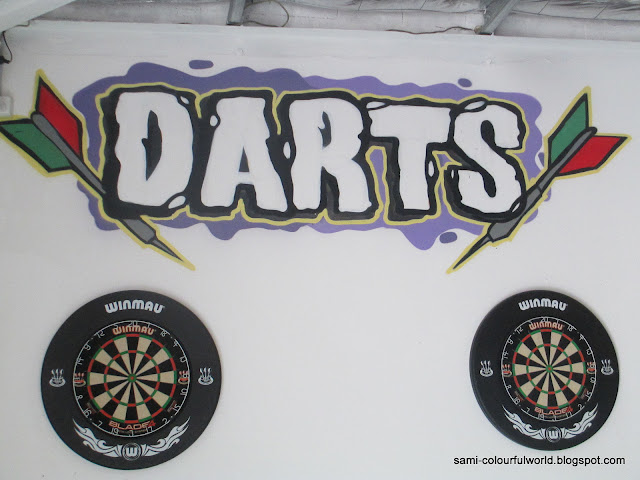 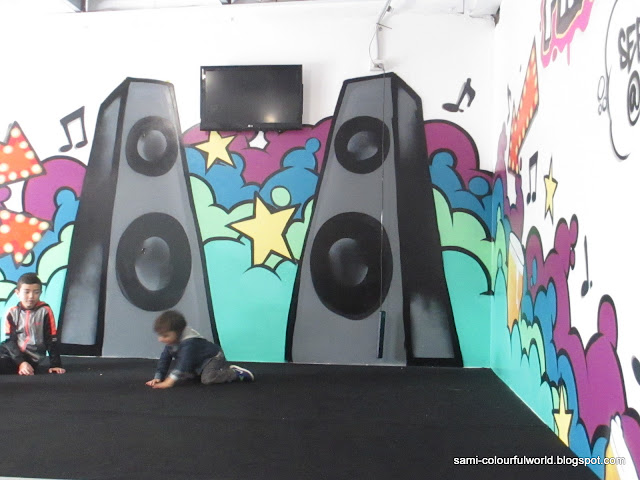