Some friends invited me to go strawberry picking with them last Sunday, 23rd. They have young kids and had done it before, but for me it was the first time, and I had no idea  people could go and pick their own fruit but you can.

They picked me up at home and we drove to Wangara in the northern suburbs of Perth, to Kien strawberry farm. I noticed a few other strawberries farms along the same road, and there were loads of cars parked along the road and people walking towards the various farms.
We parked, and at the farm entrance bought the number of boxes we each required - $7 per box, and walked towards the far end of the farm as we could see the front rows were a bit empty already.
The farm was gigantic, with rows and rows of strawberry plants popping through black plastic, and once we chose where to go we started at the beginning of that row and walked our way through until we had filled our boxes. 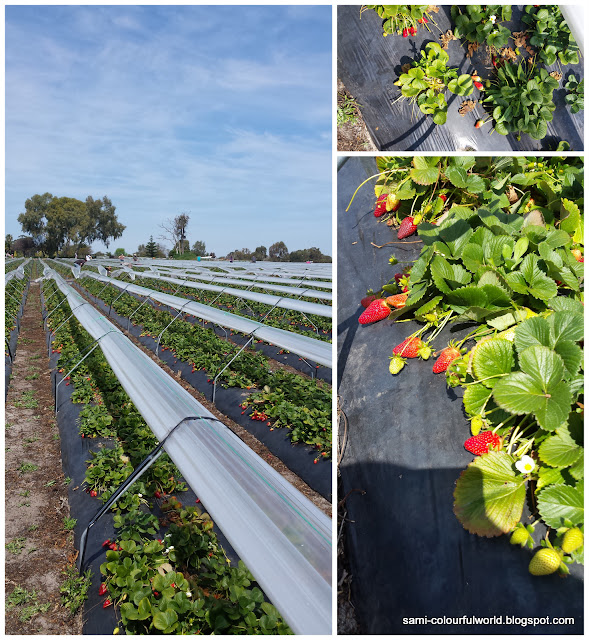 The day was quite warm and I don't know how long it took us to pick our strawberries -
I had 2 boxes to fill -  but we chatted as we moved along the rows, and also ate a few strawberries...not too many though as they were warm, and we didn't want to risk an upset stomach later on...
I picked some almost ripe and some not so ripe.

When we finished we drove to the Wanneroo Markets not too far away where we had lunch.
One of the food outlets at the market - Celyta's - belongs to a Portuguese lady.
Sometime last year I had attended a lunch there organized by a friend of ours (they have a function room there that can be used for big groups) and Celita had cooked some traditional dishes for the group.
This time she had pork and lamb cutlets, and chicken, but I don't eat the first two, and didn't feel like chicken either. My friend's daughters were going for bitoque, a very popular dish with kids - which is a thin steak topped with an egg and accompanied by fries and salad.
I ordered that for myself too, and I'm glad I did as the steak was delicious.
Lunch was accompanied by a couple singing songs from a couple of decades ago and even the kids were moving their bodies to it. 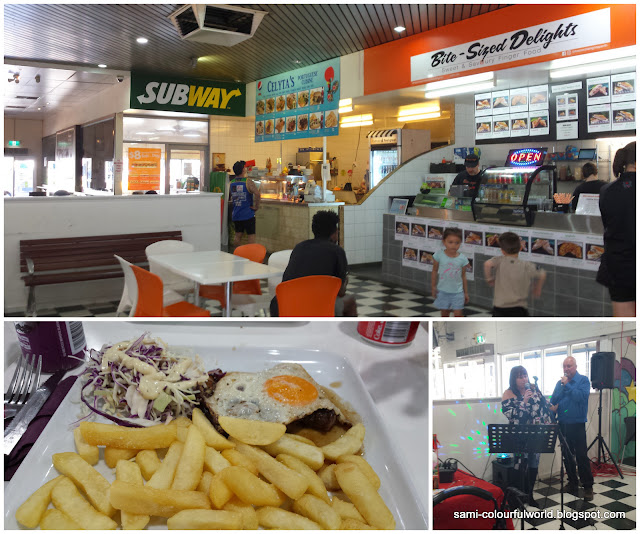 At home I weighed the boxes and both were over 4kgs (8,8 pounds), rinsed the strawberries in a bowl with 4 parts water and 1 part vinegar, to kill the spores so that they last longer, then sorted them.
With a bunch of very ripe ones I made 2 jars of jam using honey instead of sugar. I froze some ripe strawberries to use in smoothies later on, the medium ones I put in different containers for me to eat and to give away to my son and friends, and took some to work, and the greener ones are still in the fridge.


It was a great day out, the fruit was much cheaper than in the supermarket, the kitchen smelt of strawberries, they are so sweet and juicy.
I've already told my friend that if she hears of any other fruit picking she must let me know - next one I think will be cherries,  oh yeah!!