Last year at the end of September I went to Adelaide, in South Australia and visited their wonderful Zoo.

To tell you the truth I think the last time I had visited a Zoo was probably about 15 to 20 years ago when my kids were small.
Even though I have been in Perth for 6 years I never visited Perth Zoo, not even when I had overseas visitors... there are so many more things to see, that I never thought to visit it.

But when I heard that the only Pandas in the Southern Hemisphere were at the Adelaide Zoo, I had to go and see them!
Pandas are a big attraction in any zoo in the world, no wonder Adelaide Zoo is so popular!

Wang Wang (Net Net) and Funi (Lucky Girl) were chosen for their genetics so that they will eventually breed. They were both born at the Panda Research Centre in Woolong, China, Wang Wang in August 2005 and Funi a year later in August 2006. Pandas can live up to the age of 25 to 30 years.
Wang Wang is very placid and laid back and loves to snooze, while Funi is very active, playful and curious. 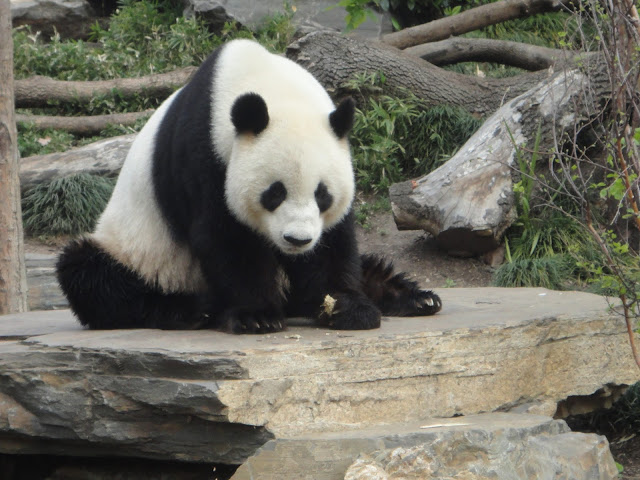 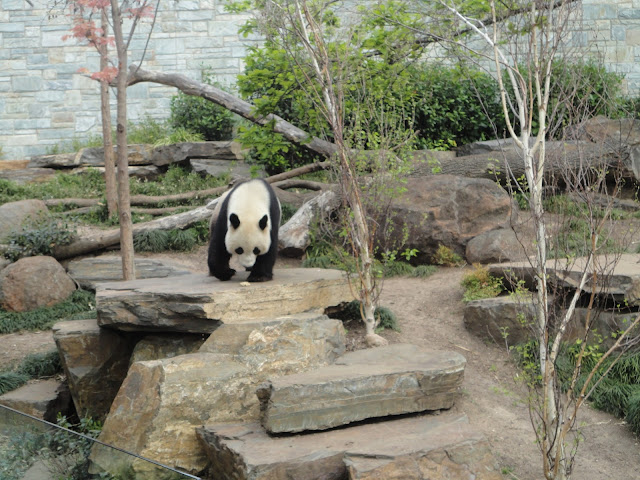 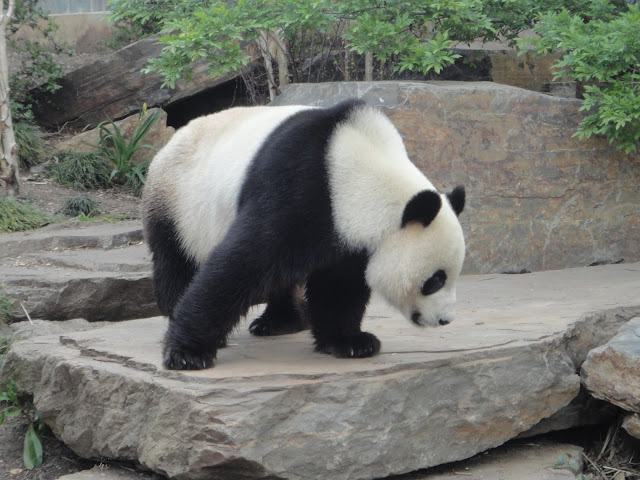 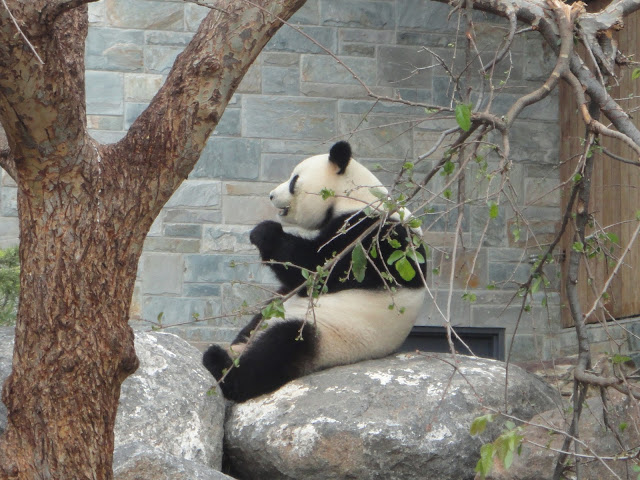 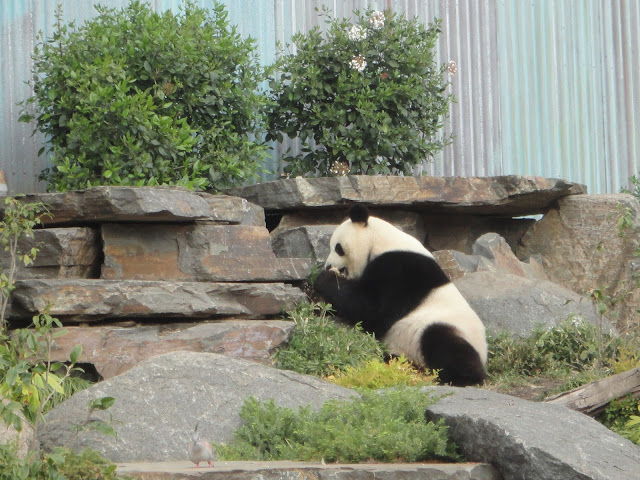 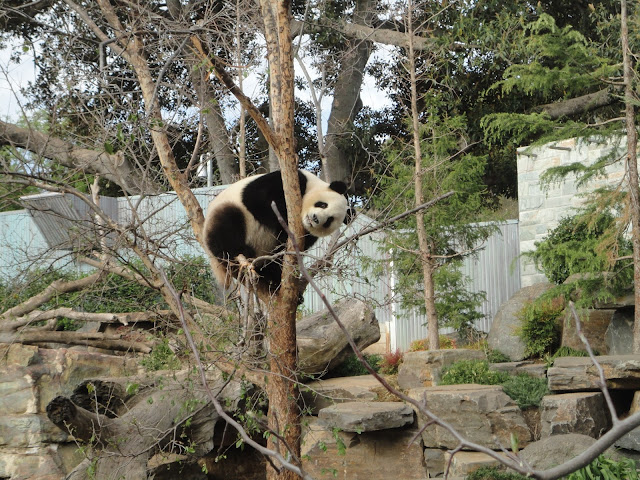 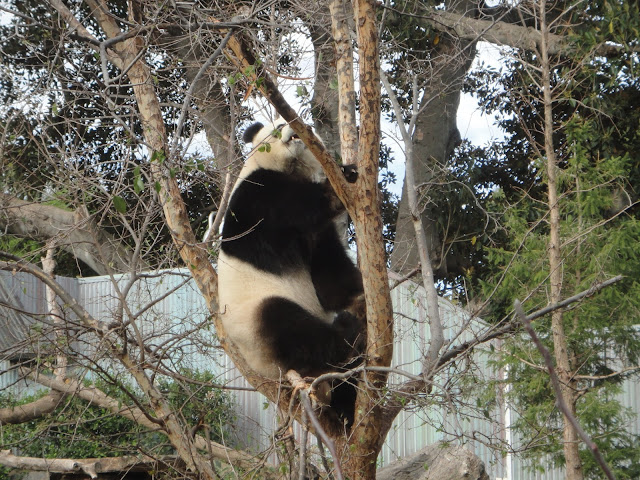 Aren't they so adorable?

Apart from the Pandas, Adelaide Zoo has lots of other wonderful animals.
I managed to spend over 5 hours walking around the zoo visiting every single animal in the zoo and zipped around the zoo to be present at the various feeding times and talks - sea lions, hippos, lions, the tiger,  pelicans, penguins... (time-table available from entrance booth).
In the Children's Zoo enclosure animals can be fed with purchased animal food, but feeding is banned in all the other areas of the zoo.

The wonderful Children's Zoo area is the ideal place for the kids to enjoy a close encounter with smaller animals, who can be touched and fed. There are over 120 small animals in this area - chickens, goats, deer, kangaroos, guinea pigs, ferrets, koalas, quokkas, rabbits, sheep, wallabies.
Who wouldn't want to be a kid to experiment all of these cute animals? 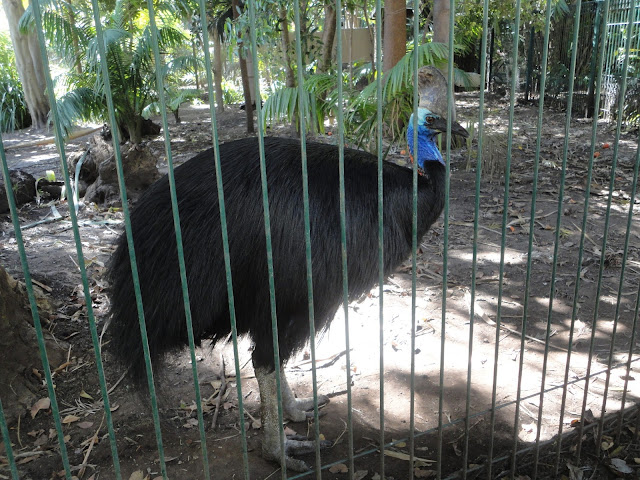 Australian Cassowary - related to the Emu and Ostrich

The giraffes seemed to me to be in a far too small enclosure, when I think that they have such huge areas to run around in Africa...
I later chatted to one of the Zoo keepers and he assured me the giraffes were happy, playful and curious, played with each other and loved to watch the car park over one of the walls of their enclosure.

There are very interesting behind the scenes tours of the Zoo, where you can pay a "handsome" fee to be able to play zoo-keeper for a day,  feed some of the animals, or learn more about the running of the zoo.

Adelaide Zoo is this month celebrating 130 years with some special events.
I was so glad I visited this zoo and quite pleased that animals were so well looked after and happy.

Have you been to a zoo lately? Did you enjoy the experience?

PS - Believed to be one of the world 's oldest flamingos- Greater, one of Adelaide Zoo's two flamingos died  today 30 January 2014 at the age of 83.

A - Z OF AUSTRALIA - W IS FOR WALPOLE

WALPOLE, a small town in Western Australia, about 430km south east of Perth and 66km from the town of Denmark, lies on the northern side of the Walpole and Nornalup Inlets.

The first Europeans to arrive in the area in 1909, were Frenchman Pierre Bellanger and his family, who travelled from Albany to take up farming land.


For outdoor lovers, there are plenty of adventures from white sandy beaches, tranquil rivers and inlets, majestic forests, and a plethora of sports and activities like kayaking, fishing, canoeing, rafting, sailing, eco-cruises, bird-watching, bush walking...

Just 10 minutes away, Western Australia's most popular attraction, the Valley of the Giants, in the Walpole-Nornalup National Park is the ideal place to walk among the 400 years old tingle trees.

Climb 40 metres up the Tree Top Walk and walk the 600 metre long metal walkway to observe the Tingle and Karri tree canopies. If you don't like heights, don't climb as even though there can only be a maximum of 10 people per platform,  you can still feel the walkway wobble when you walk, it can be a bit scary! 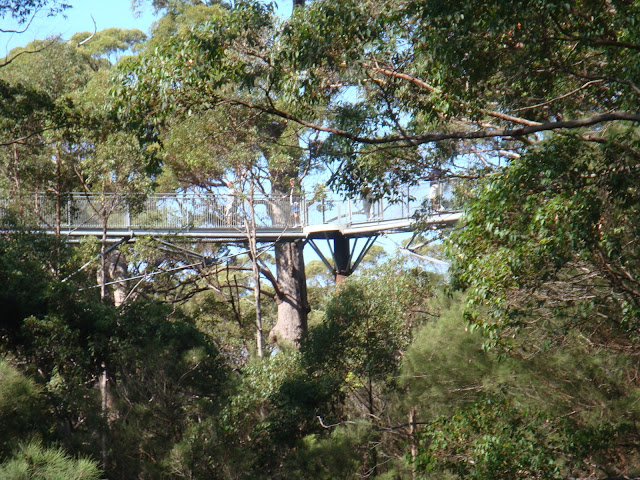 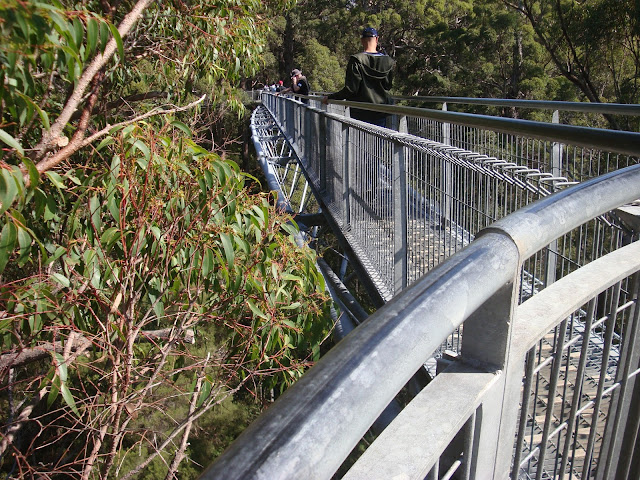 This is Australia's only long distance walking trail, 963 km long,  starting in the hills suburb of Kalamunda, in Perth, running along the Southern Ocean at Walpole, and following the coast until it ends in Albany, 120kms away from Walpole.

It is named after an Aboriginal language group, the Bibbulmun, who inhabited some of the areas on the south coast. The track is marked with a stylised image of a rainbow serpent.

Drive a few kilometres out of town, and wet your feet at the beautiful Circular Pool on the Frankland River. It's waters are calm in summer and you get waterfalls in winter. The site has a few viewing platforms and is wheelchair accessible too.


Visit the calm and beautiful beaches around the area - my favourite is "Conspicuous Cliffs", where you can climb to the top of a cliff and have a 360 degree view over the beach and surrounding bush, and to reach the beach you cross a small river.
Peaceful Bay is another lovely beach with a camping site across the road.


There is plenty of accommodation in Walpole and Nornalup, from camping sites at Peaceful

Bay, Coalmine Beach and others where you can camp or rent a chalet, bed and breakfast options, luxury chalets or motels.

Driving to Denmark you can make a few pit-stops visiting Berry farms where you can pick your own berries, visit wineries or a cheese factory, and a very interesting Honey shop, where you can see a bee hive in action, and buy all sorts of products made with their nectar - honey, soaps, creams, candles and even honey ice-cream.

Hope you enjoy Walpole and the surrounding area as much as I do. There is something interesting for everyone.
Enjoy the visit!

Ugg boots are quite a popular footwear item in Australia.

They are made of sheepskin with fleece on the inside and originally a tan colour on the outside and synthetic sole.  Nowadays there is a diversity of new colours and styles.
Australian surfer Shane Stedman has stated that he invented the ugg boot in 1971, registering the trademark as UGH-Boots.

Both Australia and New Zealand claim the invention of this footwear style.
Although this type of footwear was used in rural Australia, no one knows when they were commercially manufactured under the UGG name.
Mortels Sheepskin Factory made the boots from the late 1950's, naming them "ugg boots" after the Mrs Mortel commented how "ugly" the first pair was.


They were originally worn for warmth and comfort as house slippers, but nowadays are used in summer and winter. The insulating properties of sheepskin means the boots will be warm in winter, but cool in summer.

In the 1960's they were adopted as beach footwear by surfers.
In the USA, they became popular, when in 1994, the U.S. Olympic team wore them for the Winter Olympics in Lillehammer (Norway).
Pamela Anderson in the then popular series "Baywatch" wore them to the beach when playing a surf live saver, and their popularity soared. Jennifer Lopez has also been seen wearing them...
I'm sure all this is good for business!

Even though these famous people wear them on the streets, I still cannot get used to the idea that this footwear is to me no more than house slippers, and I really struggle to see people wearing shorts and sheep skin boots in the heat of the Perth summer.

In Portugal this type of boot or back open slipper is also made and sold, you can usually buy these in "Serra da Estrela", the highest mountain in Portugal, that gets its peaks covered in snow in winter. I have a pair that I wear in winter only and I don't think I want to try covering my feet in sheepskin in summer...

In Portugal I had never ever seen anyone wearing these slippers or boots outside the confines of their home either, be it summer or winter...