A - Z of Australia - O is for Open Gardens

I first came across the Open garden scheme when a friend who lives in Tasmania mentioned that she was  busy preparing her garden to take part in an "open garden". She explained what it entailed and what charity she was supporting. As it happened a couple of months later two of my ex-work colleagues invited me to visit an open garden with them.
I really enjoyed the experience and we have since visited a few more, not only for the inspiration, but
it´s also a lovely way to enjoy the outdoors, have a cup of tea or coffee together, and an opportunity to ask the gardeners questions about their choice of plants, discover new plants or design ideas.

Open Gardens Australia is a not for profit organisation established in 1987, that organises the opening of private gardens for public enjoyment in all of the Australian states.

If someone thinks they have a good, well maintained garden, they can request a visit from one of the selectors, and the Committee would then make a choice to include them in the visiting calendar.
On open days, usually on a Saturday or Sunday or the whole weekend, members of the selection panel and committee members, as well as friends and  relatives of the garden owner are at hand to help man the entrance, provide refreshments, answer questions, etc.,so the help of the 10 thousand volunteers involved each season is essential.
An entry fee of usually $6 is charged for anyone over 18. From this fee, 35% goes to the garden owner or the charity of their choice, and 65% goes to the Open Garden Australia, who after the deduction of their operating costs, distributes the surplus to the community as grants for garden related projects.
Yearly, around $350,000 is given to charities by the garden owners, with over $4,7million donated since 1987. Also since 1987, over $1,1 million has been given to community garden projects from those 65%. 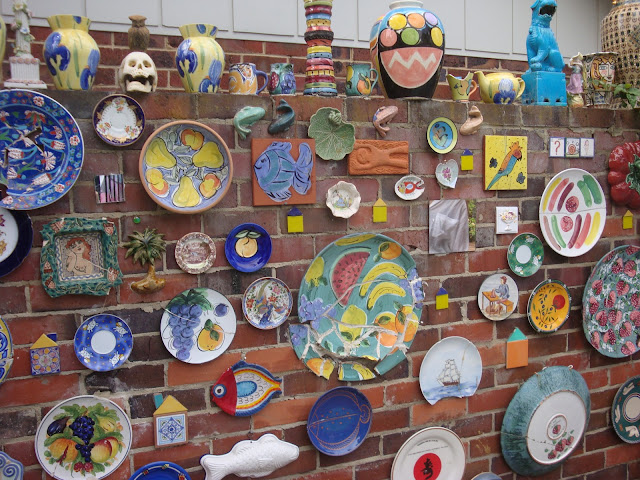 The first "open garden" we visited was in Mosman Park, one of the most exclusive suburbs of Perth. The boundary walls were covered in plates and little pictures made of broken china, and the garage wall painted with a colourful mural, both being out of character with the style and cost of housing in that suburb, so I'm almost sure the neighbours wouldn't be too happy with that outdoor decoration!


Inside, the front garden mostly occupied by a swimming pool was surrounded by murals on the walls as well as some walls covered in colourful crockery and broken tiles at the entrance to the house.

The owner who was a porcelain artist started amassing any broken china she had, and friends and anyone else who heard of her plans to recycle broken china donated all their bits and pieces to her.
I like colour and I thought the idea of recycling was lovely but in this house it might be going a bit overboard...But who would wear yellow if everyone just liked blue? Tastes differ and this lady certainly had a different house and garden!


This next garden was a tropical haven in suburbia. Photos of the original garden had been put up showing that it had all been dug up and replanted over the years. It was a very hot day, but nice an cool under all the shady trees. The owners had built a lot of steps, bridges and hiding nooks to keep their grandchildren entertained, and that was a lovely touch.


One of the most interesting features of this garden was a shower whose outside walls had been replaced by glass, facing the inside of an enclosed patio full of greenery. It certainly must be a wonderful feeling to have a shower bathed by the sun or under the night stars!

This next garden was a garden of a TV gardening presenter and it was a "study in the art of recycling" and very inspirational as well. The front garden was a "dry garden", and among various interesting ideas, the back garden had a water storage tank for rain water, chickens to provide eggs and eat leftovers, plants covered with mulch to protect from the harsh sun and keep the soil moist, a compost box, shade-cloth was used to cover the vegetable planter boxes when the weather was too hot...


This last garden was an inspiration to me and I have decided to remove the grass on my front garden and will replace it with a dry garden.
It's all being planned at the moment and I'm trying to convince my husband it will be a good idea too of course, as he will not have to be out there removing an endless number of weeds every other weekend!
Although I suspect he likes to remove the weeds, it's a relaxing pastime for him...

This has been a week of celebrations starting with my son´s birthday on the 4th of September, my husband´s on the 5th, and then a very important event on the 6th which was my son´s Graduation ceremony. 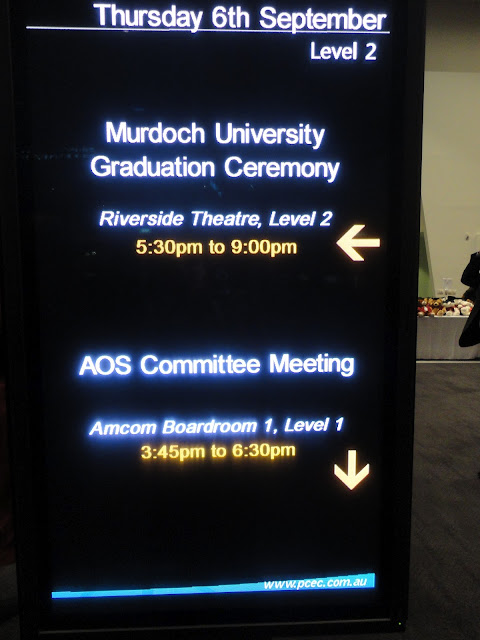 The ceremony was held at the Perth Convention and Exhibition Centre and attended by the graduates and their families. When we arrived the foyer was already teeming with students and families in an excited mood, taking photos, talking, students talking to colleagues...
After the graduates were called to take their allocated seats, the guests were ushered in and the ceremony started just after 7pm., with the entrance of the academic procession of university dignitaries wearing traditional academic dress, who took their seats on the stage. We were all requested to stand and the National Anthem was sung by a Soprano, and the Vice-Chancellor opened the proceedings with a speech.

Then the Chancellor was called, and row upon row of students in their scarlet gowns with hoods edged in different colours according to the graduate´s degree colour - violet for law degrees, green for science degrees, blue for art degrees, pink for Masters...were called onto the stage, their name was announced and their diploma was handed to them by the Chancellor.
The various faculties of Bachelor students were first, then the Masters, and the few last ones were the Doctors of Phylosophy (Phd), who then took their place on the stage, sitting beside the other Professors who represented each of the University´s faculties.
The Deputy Vice-chancellor, also made a speech and I was deeply touched and emotional when two diplomas were awarded posthumously to two  students who had died - one a young girl from the Singapore campus, who died without completing her degree but who was an exemplary student with very high marks throughout her degree, and the other an older gentleman who died with cancer, but who even through his chemotherapy continued studying and finished his degree a short while ago. A family member of each student was called to the stage to receive the diploma, and was given a very long and deserving ovation.

Almost at the end of the ceremonies, an honorary degree was granted to Mr Sydney Corser (AM OBE CitWA) (AM - member of the Order of Australia,OBE - Order of the British Empire, citWA - Western Australian citizen of the year), a man with a most fascinating life history.
Sydney finished his schooling in 10th grade, started his working career at the age of 17 as a carpenter, later became a successful businessman first as a builder, then as a residential property developer. He was instrumental in implementing the use of the concrete slab in the building of housing in Perth.
He decided to further his studies and graduated from university at the age of 55. He has been a very active member of various Board of Directors in private and public companies, as well as being a very active sailor from the age of 17, having won various championships.
Now, at the age of 82 he is less involved, but still enjoys mentoring those in need of support and advice, and he urged the graduates to find a mentor to help them in their future life.
He quoted a very interesting phrase: "You can see further if you stand on the shoulders of a wise person". True indeed!! 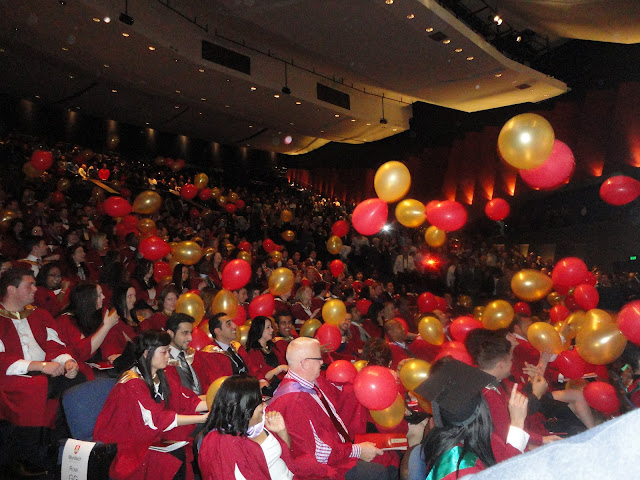 The ceremony came to a close with hundreds of balloons dropping into the central rows where the graduates were sitting, to the applause of the audience.

They were then asked to exit row by row into the foyer where coffee, tea and biscuits were laid out for students and guests.
It was time for more photos with the diploma this time, hand in the hired gown and then we went to dinner to an overpriced Chinese restaurant near the Swan Bells Tower, to celebrate this wonderful occasion. Michael was very proud of his achievement, and although he is already working in his field of study it was the culmination of the recognition of his efforts, and we as parents were very proud to be able to participate in this occasion.

A-Z of Australia - N is for Northbridge

Northbridge (formerly known as "North of the Bridge" and "North of the Line" when still part of the CBD) is a suburb north of the Central business district, known famous or infamous for it´s nightlife.

It can be reached by foot from the Perth railway station and the Wellington street bus station, or by the free "CAT bus" (central area transport).
Originally a swampy area it was later drained in the 1860´s by convict labour, so construction could start. In the 1890´s due to the gold boom, many hotels were built to accommodate prospectors and rich people.
During World War I, the elite moved out of the city, and due to European immigration, Northbridge was populated mainly by Greeks and Macedonians.  Perth´s first Orthodox church is here located.
Post war European migration brought a lot of Italians to Australia with a culture of the outdoor alfresco lifestyle and outdoor cafés, which was introduced to this area.

Nowadays the suburb contains a wide range of ethnic restaurants with cuisines ranging from Asian to Mediterranean, as well as being the hub of Perth´s nightlife.
It can get quite rowdy on the weekends with drunken youngsters and a lot of Policemen always present to keep problems to a minimum.
The few times I have been, I never encountered anything out of the ordinary and we had a good time eating out in the Chinese district or going to a movie in the beautiful Cinema Paradiso in James street, but then we probably weren´t there that late at night when the youngsters are out in force and we didn´t go into the bars either!
Cinema Paradiso is an attractive building with a lovely Art-Deco foyer, with four small cinemas showing mainly foreign language and independent films and is also home to Perth´s film festivals.