Following our visit to the War Memorial in Fremantle (my post about Anzac day in Fremantle) my friend and I walked to the harbour to admire the statues in that area.

The "Fishermen" statues were our first stop. You can read about this monument and many others in Fremantle here.


We walked then to Fremantle Prison where we were joined by my daughter in law, for a tour.
The prison was built between 1851 and 1859 with limestone quarried on site, by the British convicts sent to Australia.

This prison was know to be unfit for the prisoners, the cells were tiny, restricted diets,
corporal punishment, solitary confinement, no toilets in the cells - buckets were used right to the end, electricity was only installed in the 1920's...

In 1988 there was riot by the prisoners, guards were taken hostage and fire was set to part of the building causing a lot of damage.
Still it operated until 1991 when it closed and reopened to the public for tours.
The building is now on the World heritage list.
Between 1888 and 1984, 40 prisoners were hanged! 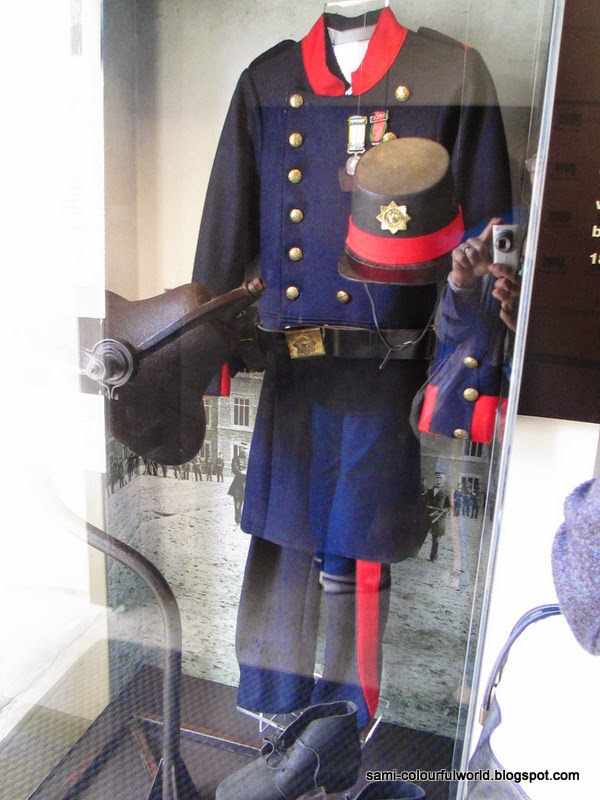 Although the tour lasting about 1 and half hours was interesting, the tour guide - a former warden- was quite humorous too, but I found there could be a bit more information on the activities of the prisoners - they were taught a trade while inside - but there was nothing in display about that.
There are 4 different tours, so maybe that was part of another tour...

We had lunch at the Fremantle Market - an interesting place to visit for fresh fruit and vegetables, lovely bread, and many other things like clothing, art, crafts, souvenirs... 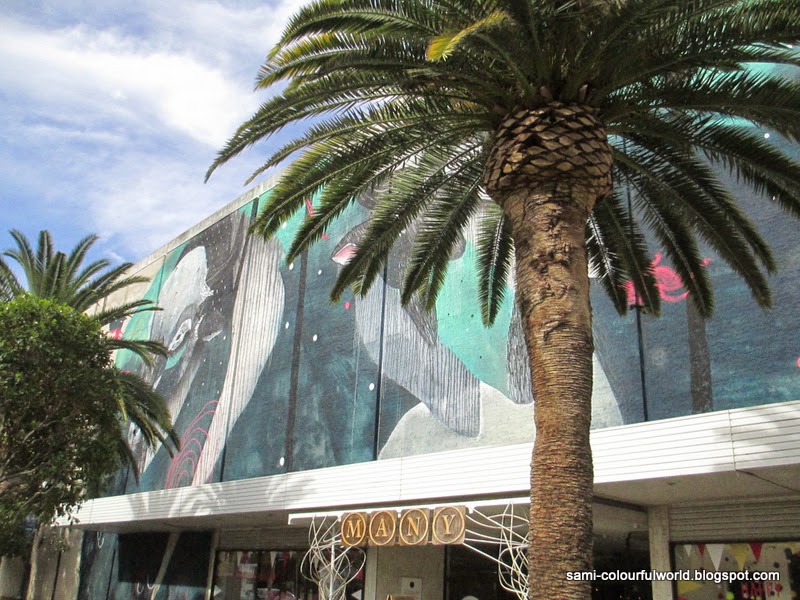 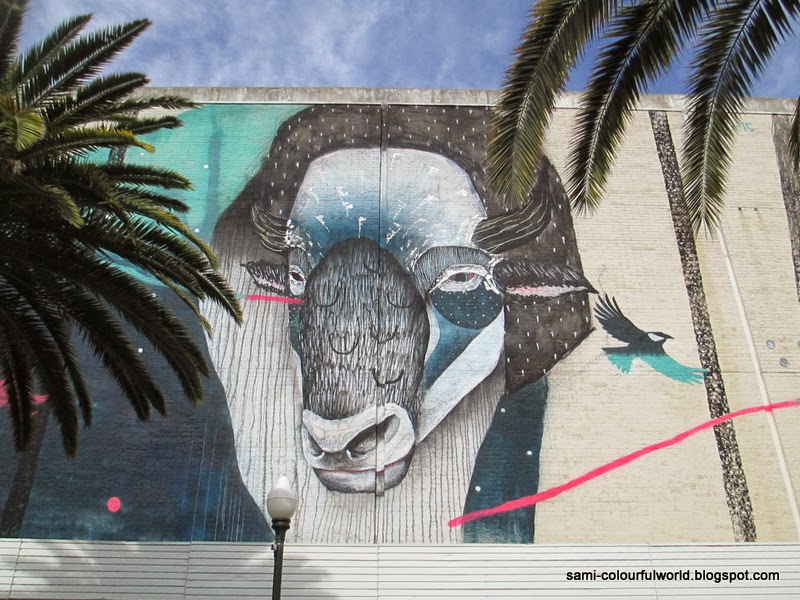 On our way to the Round House, we came across another mural in a parking lot. 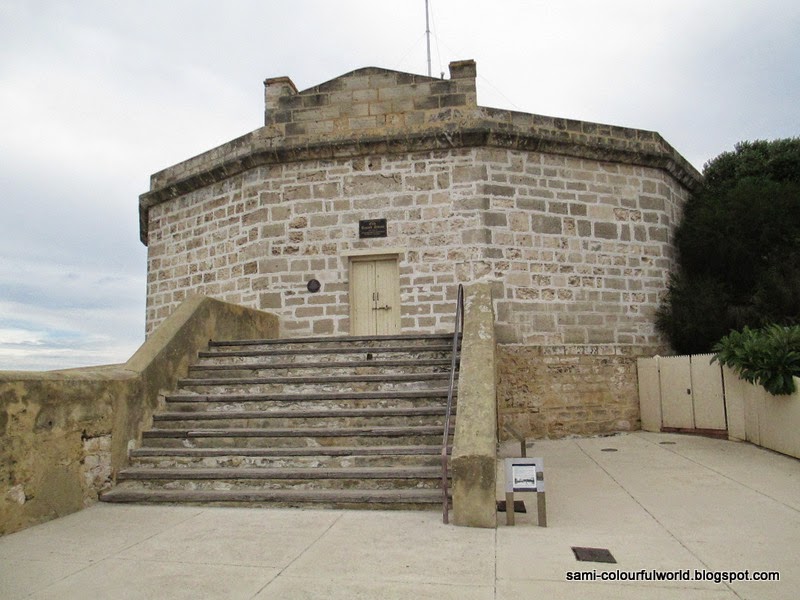 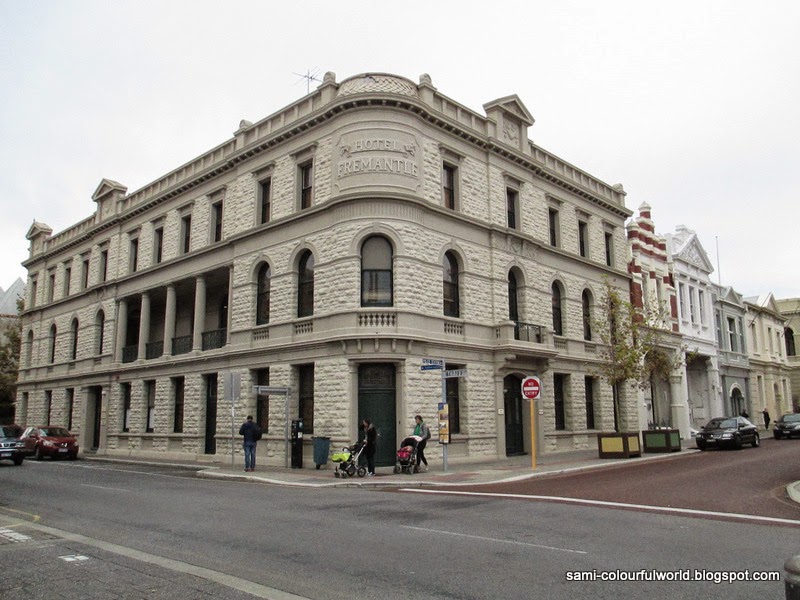 From Rossio, we walked to Chiado a few minutes away.
Chiado is one Lisbon's inner suburbs with several shopping establishments, museums and theatres and the University of Fine Arts.

In 1988 there was a huge fire in this area, which started in Armazens do Chiado, a modern shopping centre in Rua (street) do Carmo. The area then underwent a renovation that lasted 10 years.

We went past Santa Justa Lift (Elevador de Santa Justa), which we gave a miss, as we had been there before, but if you climb it you get wonderful views over Lisbon.
In front of the shopping centre, is Rua Garrett, and at at nr. 19 you will find a courtyard sheltered from the street noise, with a couple of restaurants and cafes.
We chose the first one on the right - Aprazivel - the interior was quite nice, with a kitchen behind a glass partition. Pleased to say that I ordered mint tea and I was also served the tea with mint leaves just like in Amsterdam!

Climbing Rua Garret at nr. 120 there's another  famous art-Deco Cafe with a terrace full of tables - A Brasileira  (the Brazilian) - opened since 1905, known to be frequented by Portugal's intellectuals, artists and writers, including the famous Fernando Pessoa who has a bronze statue  installed in 1988, of himself sitting at his usual table. It's a very popular spot with tourists taking photos of Pessoa. 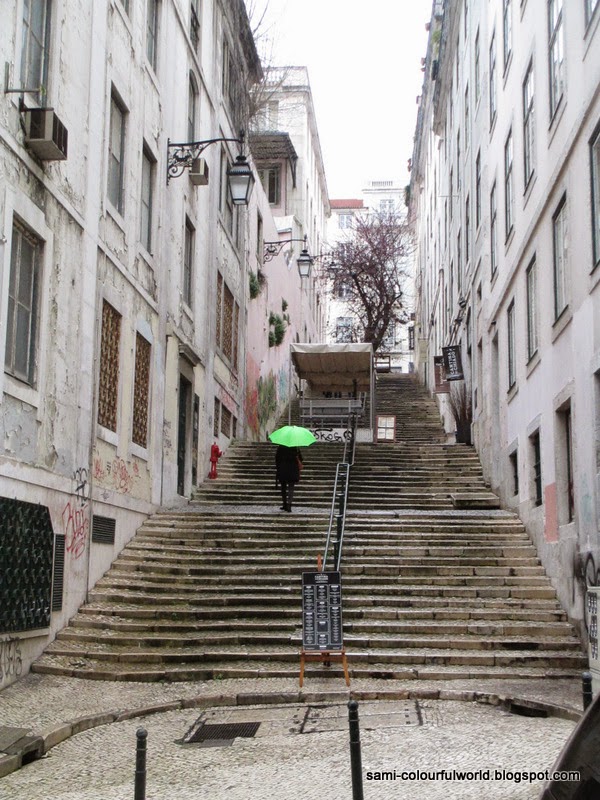 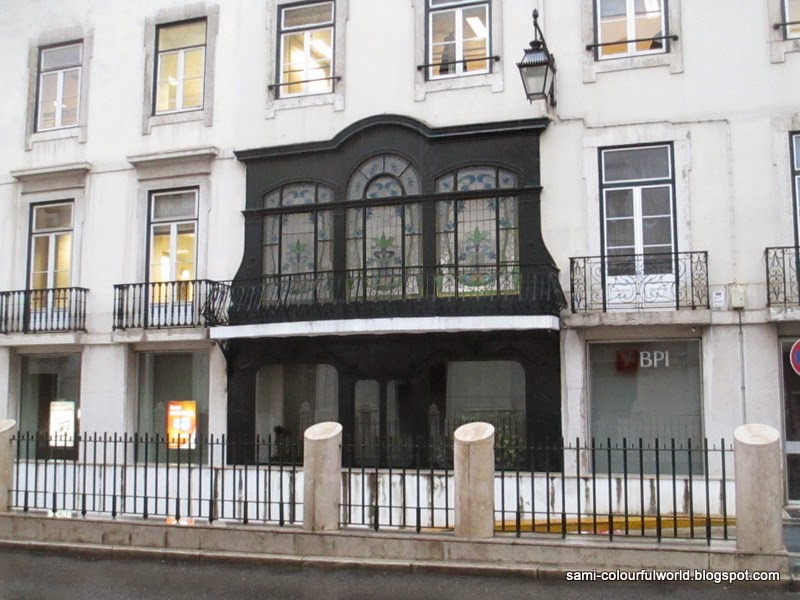 ... until we reached Rua Augusta with it's arch at the end.
The Arch was built to commemorate the reconstruction of Lisbon after the 1755 earthquake.
Construction of the massive marble arch started in 1755 and ended in 1873 and the arch can be climbed for views over the city and Tagus river.

On the other side of the Arch is Commerce Square or Palace Square (Praca do Comercio or Terreiro do Paco) surrounded on 3 sides by symmetrical yellow buildings on arched galleries, housing Government offices. Here stood once a royal palace that was destroyed during the earthquake.
In the centre of the Square is an imposing bronze statue of King Joseph I.
The Square is a popular venue for New Year festivities.

This square was the scene of the murder of the penultimate King of Portugal - King Charles I, in 1908.
On the way from their royal Palace, the King and his family were shot in their carriage by two men in the crowd. The King died immediately, the heir (Prince Luis Filipe) was mortally wounded and Prince Manuel was hit in the arm. He became the last king of Portugal - Emmanuel II, and reigned until the 5th of October 1910, when the Monarchy was overthrown by the Republican party.

Across from the square is the River Tagus. The riverside area between Commerce Square and Cais do Sodre (where the Station to Cascais is), has recently been reclassified, and is today a landscaped pedestrian area with modern Cafes and access to the water, although you aren't allowed to swim there.

Columns Wharf (Cais das Colunas) is the name given to the two columns that embrace the marble staircase to the river. These were the "doors to the city of Lisbon" from where important figures of State like Queen Elizabeth II disembarked in 1957.
Nowadays the wharf is used by the ferries crossing the river to the south.
It's known that the Columns were finished towards the end of the 18th century, they were dismantled in the 19th century, again re-installed in 1929. In 1997 they were once more removed due to the underground works to the Santa Apolonia station, and they were again re-installed in 20018.


Well, all good things come to an end, and the next day we were flying out of Lisbon towards one last day in Amsterdam before flying back home to Perth.

I hope you enjoyed the tour through the most important areas of Lisbon. Hopefully one day you will be able to see this wonderful city too.

The next 3 photos were taken from the air over Lisbon. 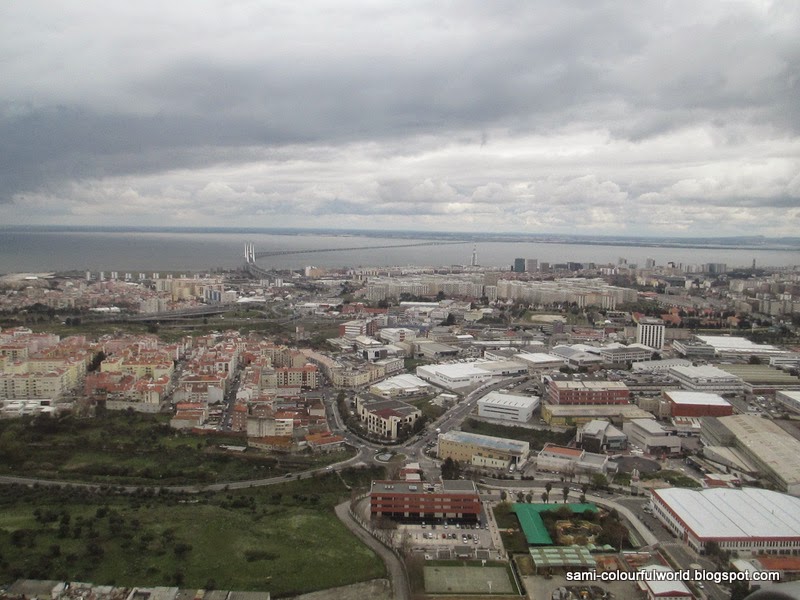 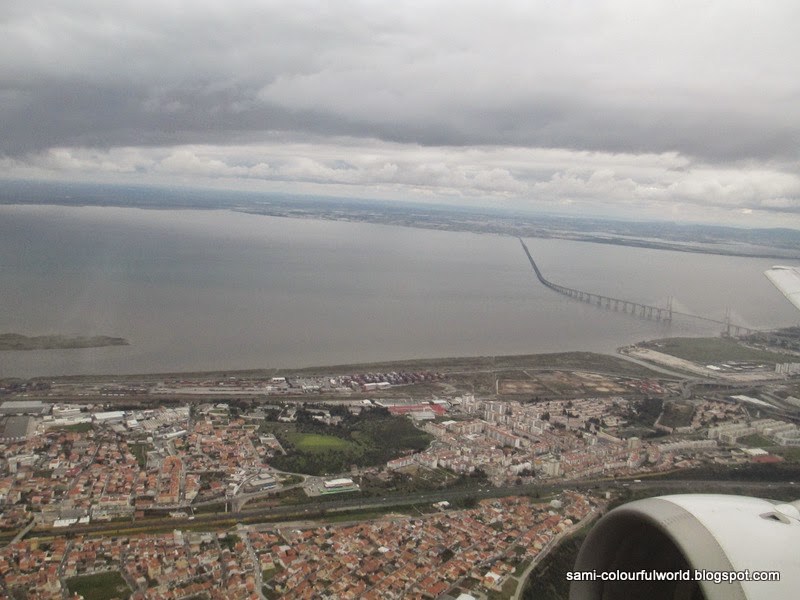 Fremantle - The day before the Anzac Centenary

A friend visiting from Sydney was keen to go and visit Fremantle, so with a day off work, Friday was the ideal day!

Our first stop was at the War Memorial in Monument Hill, (High Street) from where you can get a nice view over part of the city, Rottnest Island and the harbour.

The Memorial comprises a main obelisk unveiled in 1928 and 8 other smaller memorials to the various wars Australia fought on.

While we took photos preparations were afoot for the Anzac Centenary Commemorations of the landing of the Australian and New Zealand Army Corps in Gallipoli (Turkey), which takes place on 25th April, not only in Australia, but in  many other countries.

As we went down the hill to the parked car, I noticed this lovely bus stop painted to commemorate Anzac as well.
One side had a soldier painted on - pity the "peeping hole" (used when you're sitting to look out for the bus) is right in the middle of the soldier...
The other side had a nurse, the front had soldiers on horses and red poppies, the back had soldiers walking at night, and even the ceiling was painted to match.
What do you think, isn't it brilliant?