Monday Murals - Redistribute for a world of solidarity

I love murals and street art. If you like murals or have a mural you'd like to post, this meme is for you.  Just follow the Linky steps below.  Once you start looking you will find murals everywhere.  The "Monday Mural" meme goes live on Monday at 12,01AM, Perth,Western Australian time. Be sure to link back to this blog and visit your fellow posters. Looking forward to your mural finds this week.   Thanks Sami

On our way to the East Side Gallery - an open air gallery on the remained section of the Berlin Wall in the Kreuzberg quarter, this was the first mural I spotted as we came out of the Underground train station where we alighted - Schlesisches Tor, and just before crossing the Oberbaum bridge.

The colourful map of the world mural was painted in January 2021, and is called "Umverteilen für eine solidarische Welt" or "Redistribute for a world of solidarity", and can be found at Falckensteinstraße 46. 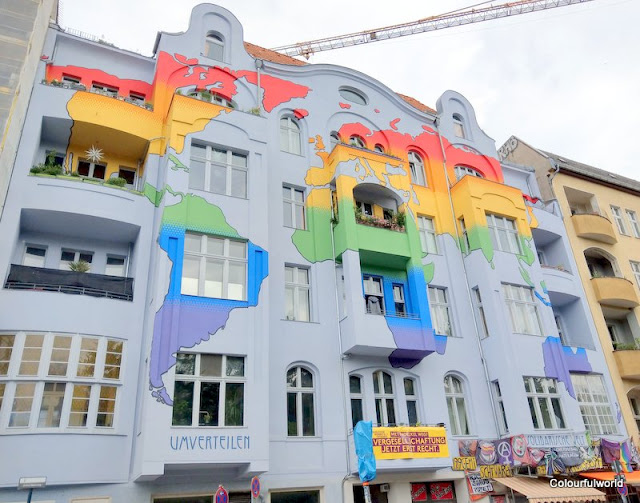 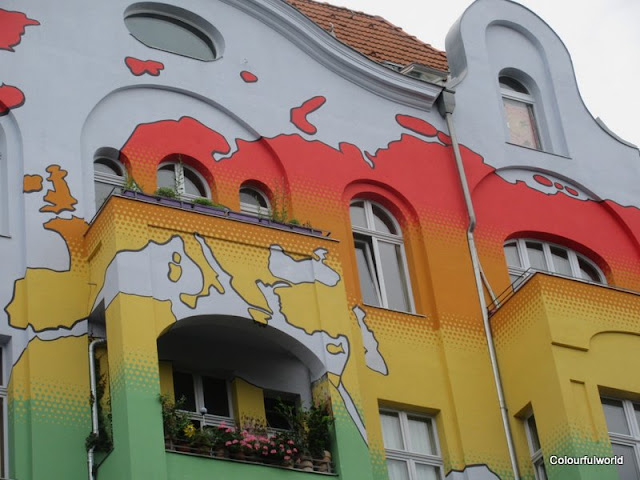 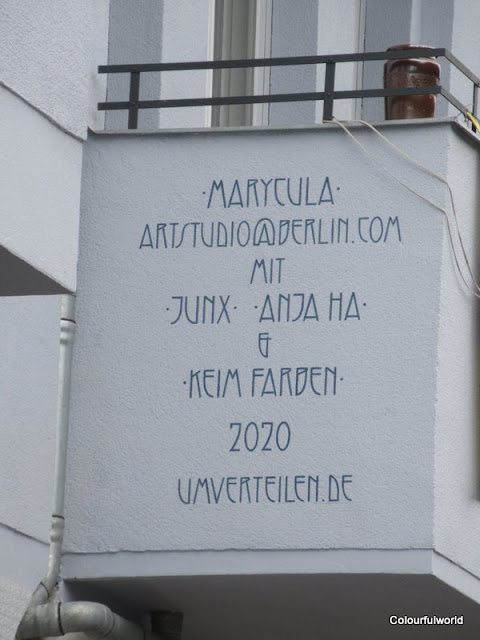 Also joining Tom with his signs from around the world. Please check this link.

We arrived in Vilamoura in the early afternoon. My parents stayed with my sister Isabel and brother-in- law in the apartment they own there, while Jose, I, Karina, Thomas and my sister Luisa stayed in an Airbnb apartment, in the street just behind my sister's apartment.

Our 2 bedroomed Airbnb apartment was comfortable, roomy and nicely furnished, with a pull-out couch in the lounge for my sister Luisa. 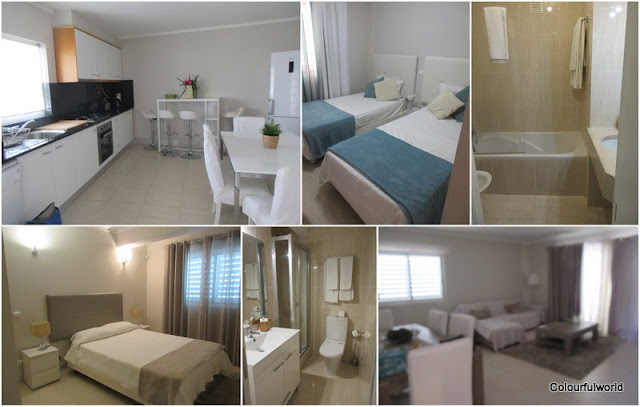 We enjoyed 8 days of family time going to the beach (only once) as we preferred the pool...having lunch and dinner together either at my sister's or in restaurants and meeting up with family and friends who live in the Algarve.

We had a fun evening at an English owned Karaoke bar - Parkys - where we went for a drink, to listen to music and dance. My two sisters and I tried our hand at singing (very badly) in public for the first time, but we had great fun.

A couple of nights we went to the Vilamoura Marina, to have an ice-cream and walk around. Too crowded as usually in the warm summer nights! 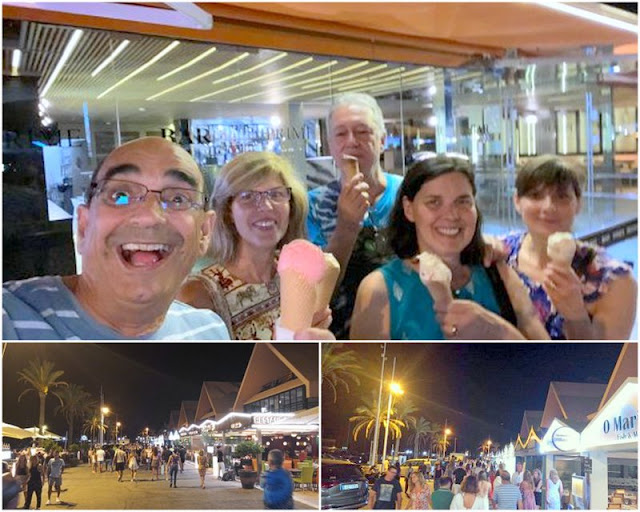 The whole family met up with our friends from Perth, who were also holidaying in the Algarve, in their apartment just across from the beach, in Armacao de Pera . 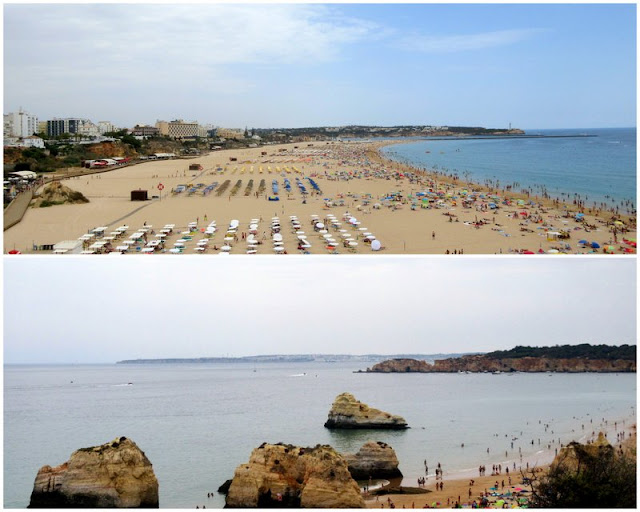 Then we all drove to the historical town of Silves, about 20min away, where we had lunch. Some had the "Cozido a Portuguesa" a heritage dish - a boiled stew with a variety of meats, potatoes, cabbage. I'm not a fan actually, so I ordered grilled squid with potatoes. 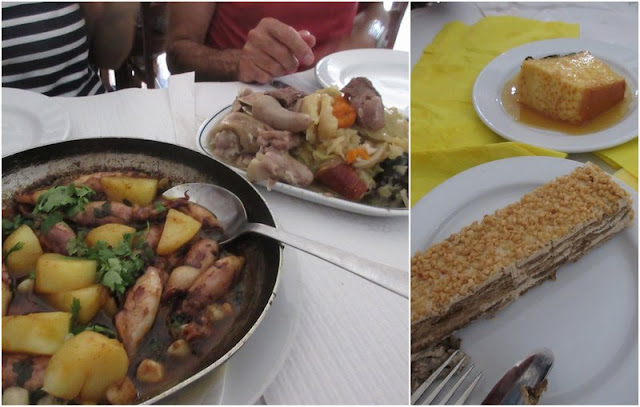 The town of Silves was the old Moorish capital of the Algarve region. The castle on top of the hill overlooking the city, was occupied by the Moors between the 8th and 10th centuries.
Walking around the mains street facing the river, I found a lovely park with lots of statues, and I lots of murals too :)
The statues depicting scenes of daily life of Arabic people who lived in Silves during the 11th century reign of Al Mouhatamid Ibn Abbad, the governor of Xelb (Silves), who was also known as one of Andalusia's best poets.
The statues are carved in a local stone, standing on stainless steel islands and some islands are inscribed with Arabic texts.
Praça Al Mouhatamid Ibn Abbad - this square where the statues were, serves as an entry into the city, and is named after the Governor of Silves in the 11th century, who also reigned in Seville (Spain) and died in Marrakech (Morroco).
After lunch, our friends returned home and we drove on until Praia da Rocha, (Rock Beach) 30 minutes away - known for the rock formations in the water and vast sandy area. Karina and Thomas still went for a quick swim, while we wandered around and sat at a cafe having a drink. 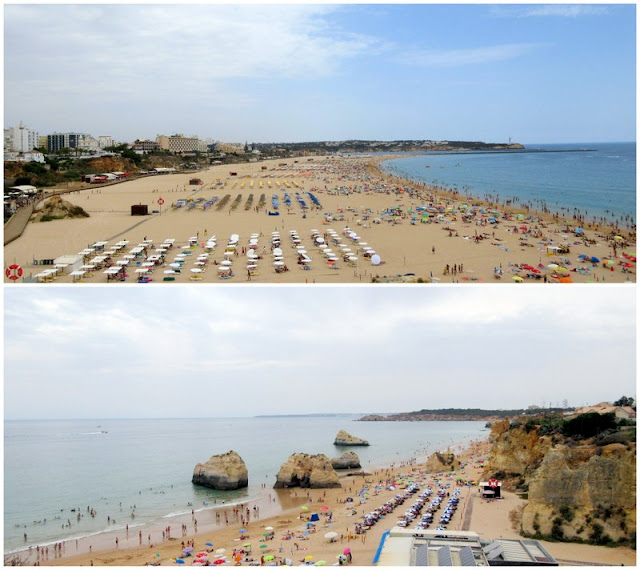 On a different night, we picked up Jose's older brother and sister-in-law who live in Faro, the southernmost city in the Algarve, and took them to dinner in Olhao, a fishing town 10km away. They choose a Fish and Seafood restaurant, the food was superb, but again the portions were huge!

And I end this very, very long post with a last photo of my parents and their 3 daughters.

Two more murals in Berlin's Kreuzberg District - on the corner of  Franz-Klühs-Street and Wilhelm street, adjacent to the Theodor-Wolff-Park, near the two murals I showed last week, and within walking distance to Hallesches Tor underground station.
Painted in 2016 by German artist Jadore Tong AKA S.Y.R.U.S.(Save Your Rich Untouchable Soul) who is based in Berlin.
While you play basketball you can admire the vibrantly painted elephant who's holding a balloon of the world. At the bottom of the mural are the words "Peace, Unity, Love and Wisdom". The artist took 4 weeks to complete the mural with some help from local artists. 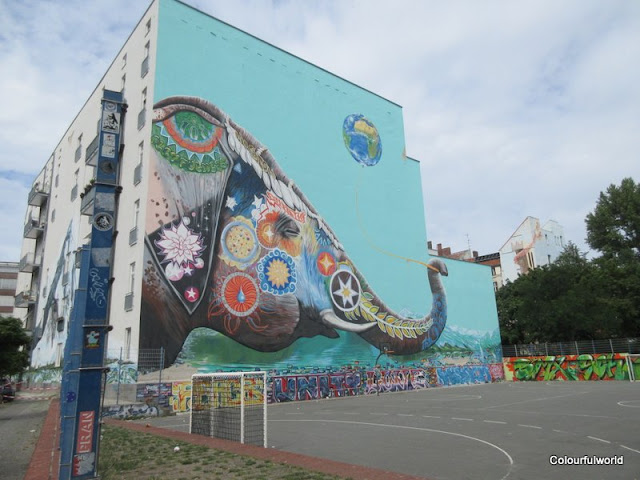 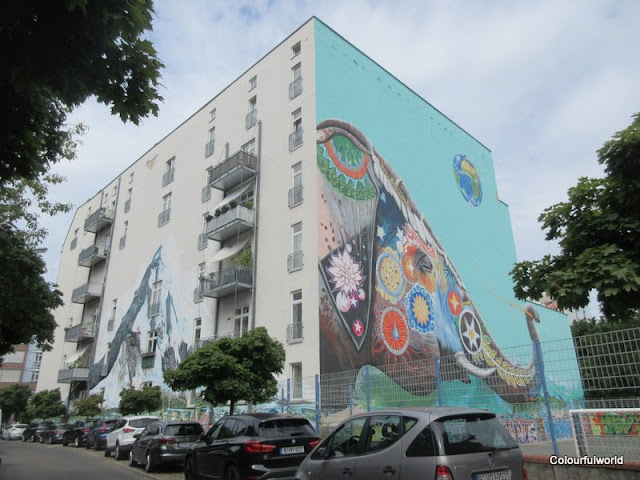 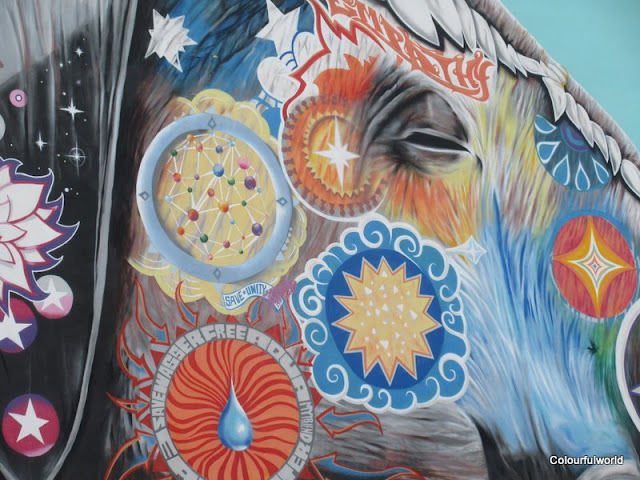 Around the corner at the front of the building the mural Himalayas was also painted by the same artist. 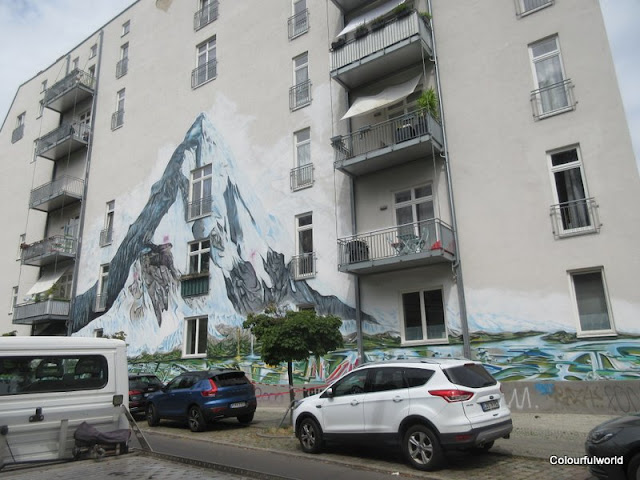 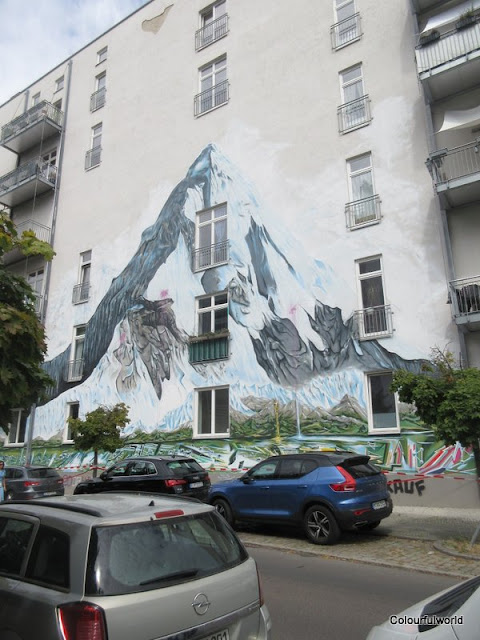 Joining Tom's signs - to check other signs from around the world please check this link.

The day after our return from the centre of Portugal, my younger sister Luisa arrived from South Africa on the 6,30am flight. My middle sister Isabel, Jose and I picked her up at Lisbon airport.

We then drove to my parent's house, where we had a family breakfast and then my sisters and I went to a nearby shopping centre so we could buy some essential clothing items for Luisa.

After 2 days, checking the website, calling the airport, still no bag!

Someone suggested she go to the airport and actually check the "lost luggage room" and see if she could spot her bag. Off we went to the airport again! She checked, and checked and nothing, but on her way out she decided to go to the carousel where her luggage had arrived and as she walked towards it, she spotted her bag standing all alone just two carousel's away from the original one.

Crazy that the airport people don't collect all those "stray" bags and take them into that "lost luggage room". What might have happened is someone grabbed her bag and a few steps later realized it was the wrong bag and just left it there instead of taking it back to the original carousel, creating a stressful situation for others!!

That night the family had grilled chicken for dinner at "Somos um regalo" in Cascais, with my uncle, wife, daughter in law and 2 granddaughters, all visiting from the United States where they live.
After dinner we walked around Cascais and then stopped at the famous Santinis for Ice-Cream. 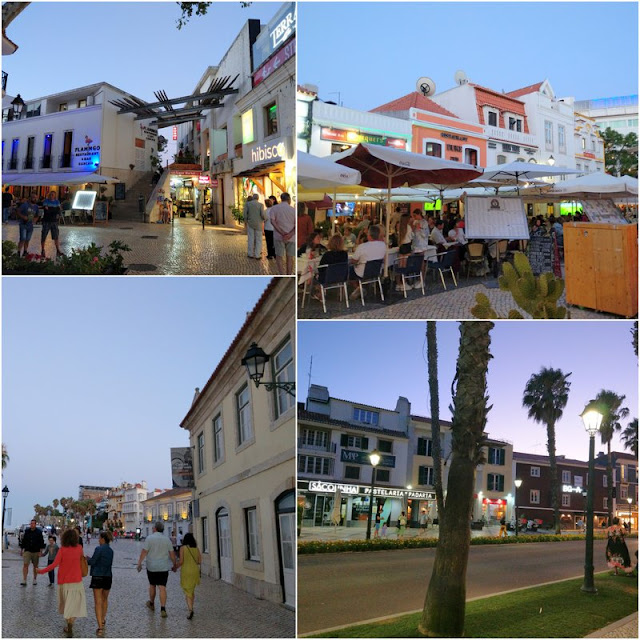 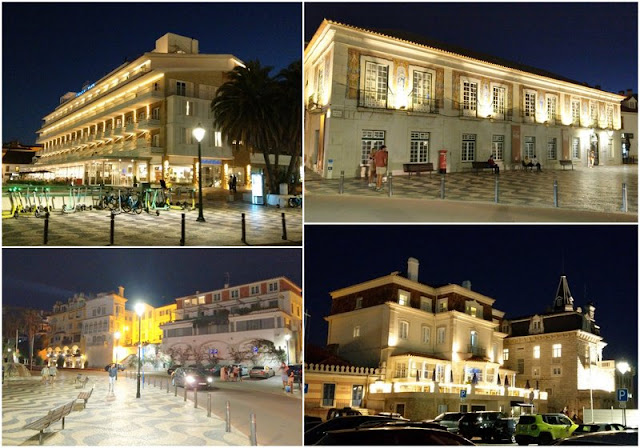 I accompanied my sisters to a newish supermarket in Cascais - Auchan- (a French multinational), that blew my mind away. It was built on the site of a former smaller supermarket. I had never seen such a huge supermarket with such a massive choice of articles like cheeses, wines, bread, fruit and vegetables (that I didn't even know), fish, nuts, yogurts, juices... I was going from aisle to aisle in awe, like a kid in a candy shop!

And from the underground car park entrance they had recycling stations for things like coffee pods, batteries, electronic equipment, oils, ink cartridges and even cork bottle tops. In the car park they have "green parking bays" by the doors, marked with a leaf.  Very advanced I thought! 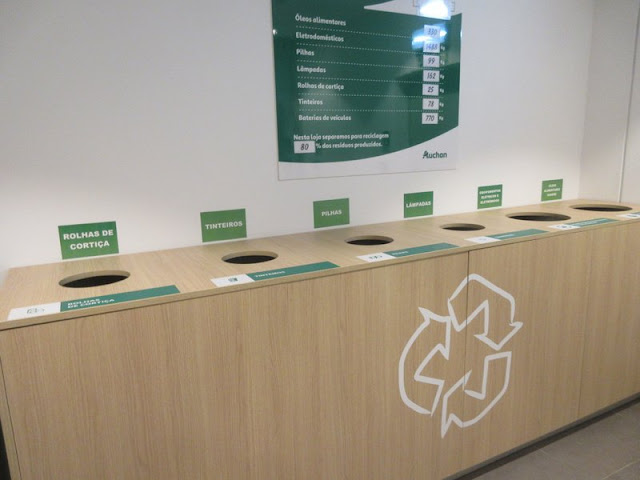 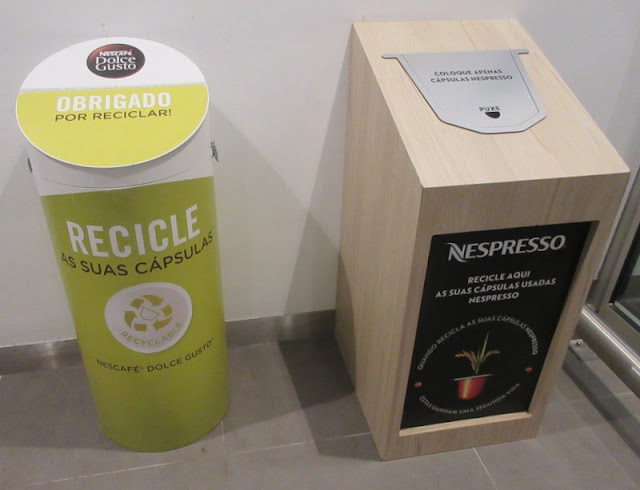 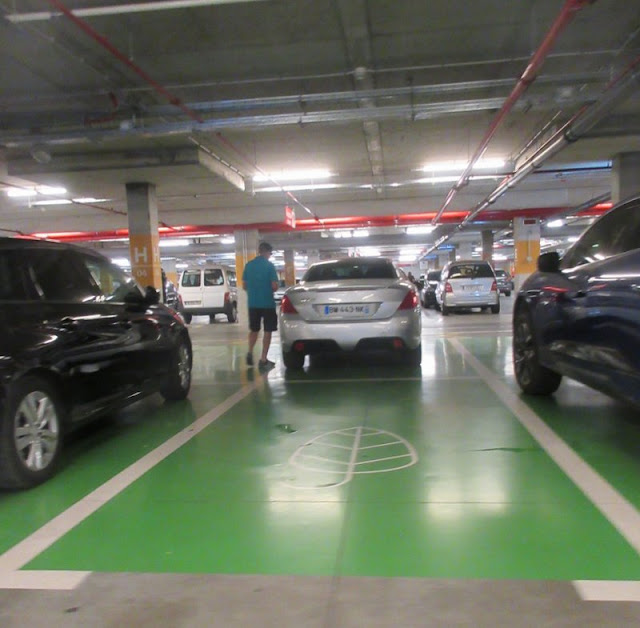 Two days after my sister's arrival, our son-in-law Thomas arrived from Cologne at midday and because Karina had an online work meeting, Jose and I picked him up.  As we went early, I convinced Jose to drive me around the suburb just behind the airport so I could photograph murals in the area. He's well trained by now 😃.

That evening Jose and I had dinner with a young couple who we originally met in Perth a few years ago, and now live in Sydney (who were also on holidays in Lisbon), plus her parents and the parents of another Perth friend, at Adega das Gravatas in the inner-city suburb of Carnide.

The restaurant was huge, very quaint with loads of ties (gravatas) hanging from the ceiling and on walls. Even though it was a Thursday I could hardly believe how popular and full the restaurant was!  Again, the food was delicious, but the portions were gigantic!

There are so many different styles of tiles (azulejos) in Portugal, mainly covering old buildings.... I must have taken photos of over 50 different ones. 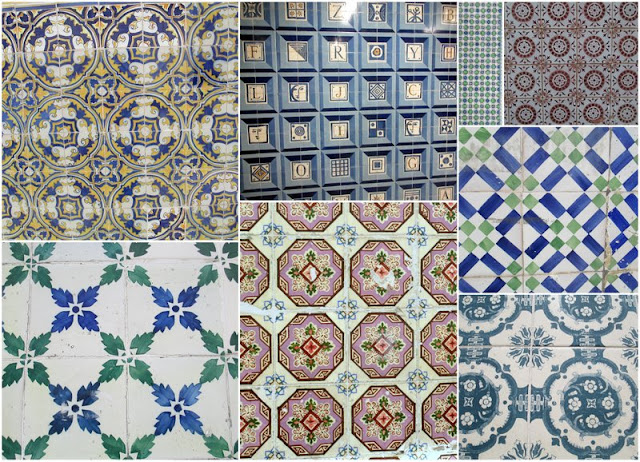 The following day the 9 of us left in 2 cars to spend 8 days relaxing in Vilamoura, in the Algarve in the South of Portugal.

Next episode:  Relaxing in the Algarve