Monday Mural - Under the sea

This mural is on the toilet block at Deep Water Point reserve, overlooking the Swan River in the suburb of Mount Pleasant.
The mermaid and other undersea life is beautifully painted on the front and side of this building. On the other side is another sea related mural which I'll show next Monday. 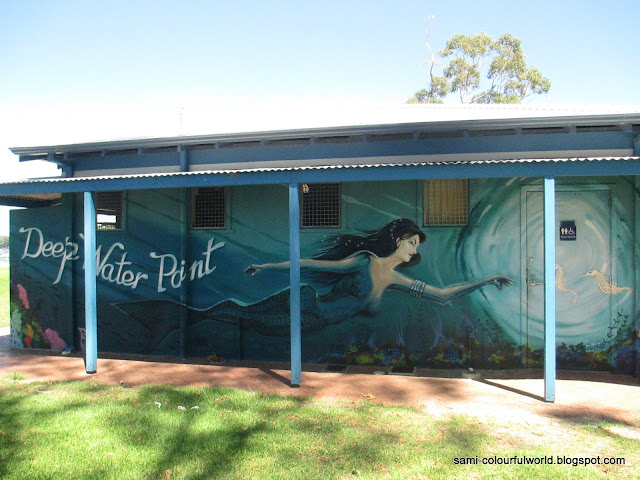 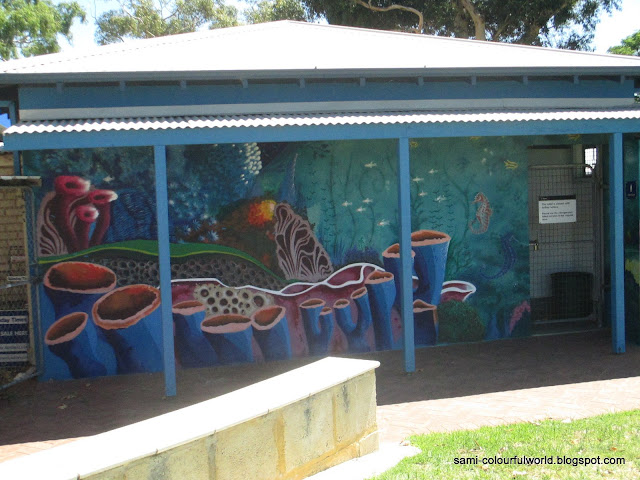 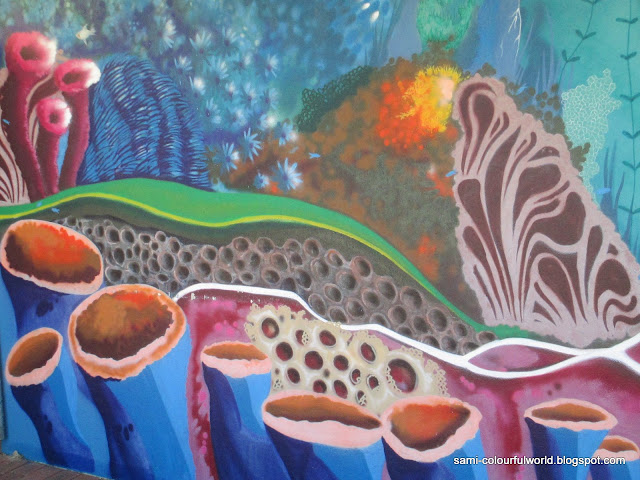 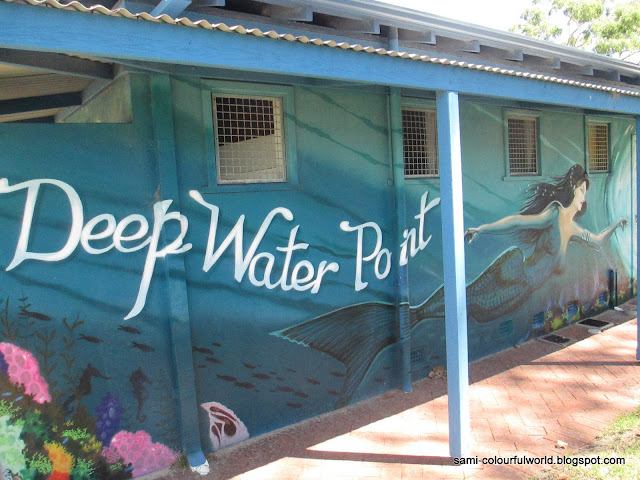 A wet and cold Sunday, well can you say it's cold when it's 15C?

We had two events this past Sunday - a birthday breakfast at the Royal Perth Yacht Club, which was founded in 1865 and is Perth's most prestigious yacht club in the suburb of Nedlands.

In the afternoon we had a farewell party for a Portuguese couple moving from Perth to Sydney.

Leaving home I saw the first rainbow which soon disappeared... 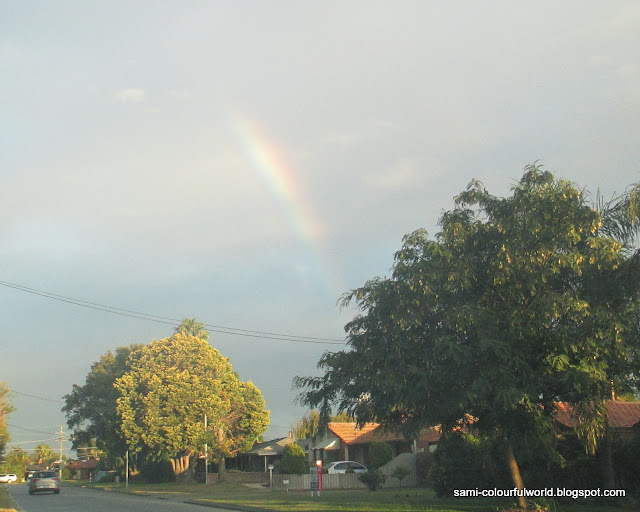 The club is just across the river from Perth's city centre, and it's a great background to the hundreds of beautiful boats.  The sun eventually shone, the sky became bluer, even though it was quite cloudy. 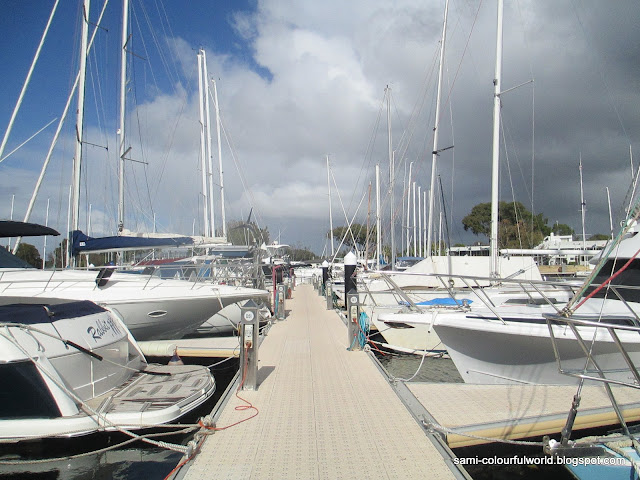 As we left the club to go home we just drove around the suburb along the Swan River and at the end of one of the roads we came across another beautiful rainbow.


On the way home we cross the Mount Henry bridge over the Swan River, and the clouds are heavy and dark again. 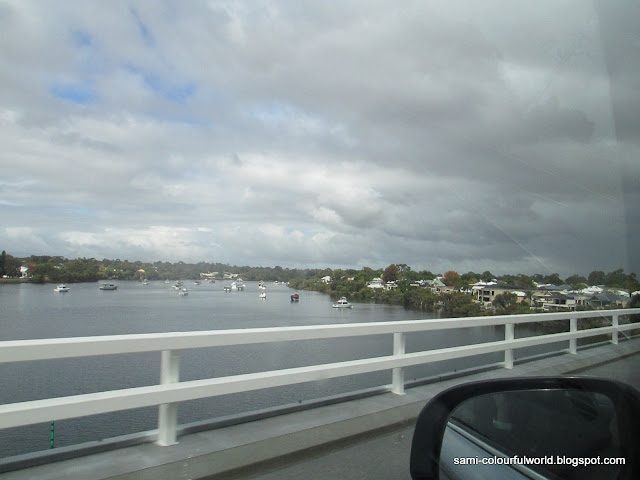 In the afternoon we drove to the northern beach suburb of Trigg to join a group of friends to farewell a young couple moving to Sydney.
When we arrived there was a surfing competition just finishing. Can't believe anyone would be in those rough and cold waters ....

While we waited for everybody we had a hot drink at "Canteen coffee shop", and there was a little bird casually wandering around the place. The waitress said he was a regular visitor who came looking for crumbs. Sweet!
When everyone arrived we realized that we were far too many for the small coffee shop as well as they didn't serve alcoholic drinks, so we moved next door to "Kailis restaurant" where we had snack and drinks.

Another mural found on our car trip to Northern Western Australia, this time in the small It's been painted by "Children of Jurien" in 1998 on the beach toilet block.

For other murals from around the world check this link. 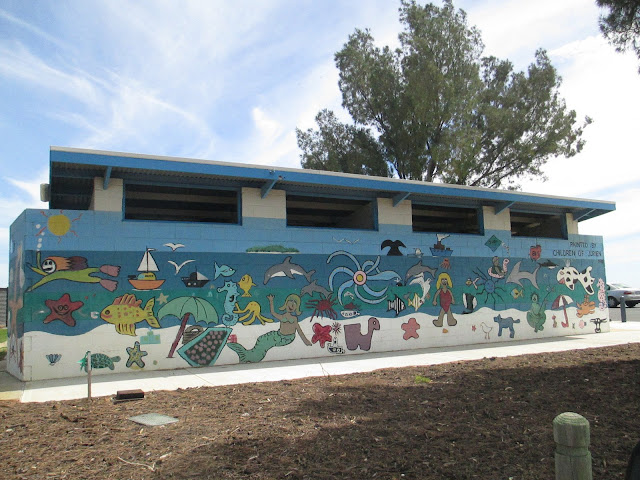 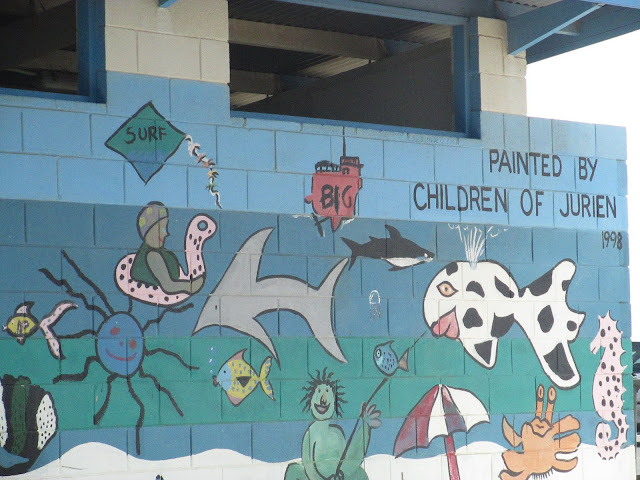 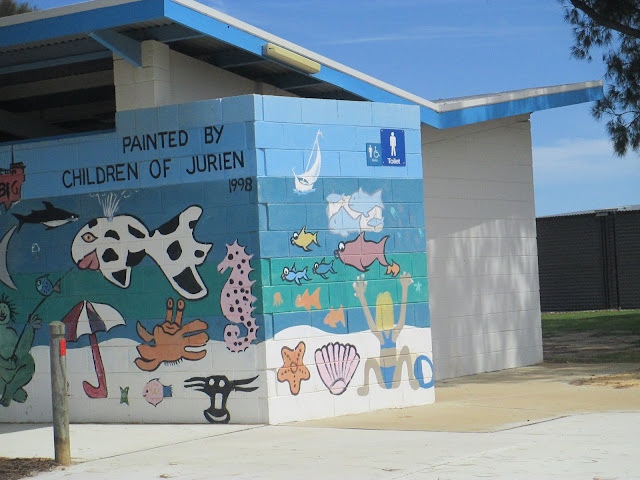 The weekend of the 6th and & 7th of May was very productive in the garden.
The weather was fantastic and warm and with the "green verge collection" starting in our neighbourhood this week, it was the ideal time for my husband and I to trim some trees so we could put those branches out on the verge.

In the back garden, the lemon/mandarin (tangerine) was drastically trimmed as it's been very unproductive and has lots of thorns too.


The passion-fruit vines along the side fence are flowering and fruiting again (they last fruited in December), so twice a year! We have two kinds - a purple one and a yellow one, the purple ones being less acid.
Flowers can be seen on the paw-paw tree (papaya), it's a young plant so it hasn't borne fruit yet.
The banana tree only bore 3 or 4 tiny bananas for the first time last year, so it also got a trim.

The Pomegranate tree in the front garden is old and the fruits are usually few and dry, but this year it's fruiting a lot more, although the fruit is still a bit dry.

My husband also picked the olives from the small olive tree in the front garden. It was planted about 5 or 6 years ago, and this year it's given us 2 and a half buckets!
They are now soaking in water which gets changed daily for a couple of weeks and then will go into jars covered by a brine made with water, salt and vinegar.

I managed to catch a couple of birds on the trees, and in the lemon tree there was an empty nest probably left over from Spring.

While we were working in the garden our cats kept us company, with Fluffy , our ginger boy always close to the action. Shelley preferred to take a comfortable nap, and Twiggy also came to survey the work.

And below is the big pile of greenery out on the verge ready for collection.
Usually a big truck with some sort of mulcher comes along and they use all this stuff to make mulch.
Not sure what they do with it - sell or just use it for council gardens.
We had to remove pebbles from the edge and put down a few more cement pavers (we only had 3 enough for the rubbish bins) so that the pebbles don't get removed along with the greens.

Greens collections gets done twice a year, so when we get notified it's a great time to clean up the garden.
Posted by Sami at 22:41 26 comments:

Monday Mural - At the vet

This cute mural at my local vet, painted on the building's facade.
For other murals from around the world please follow this link. 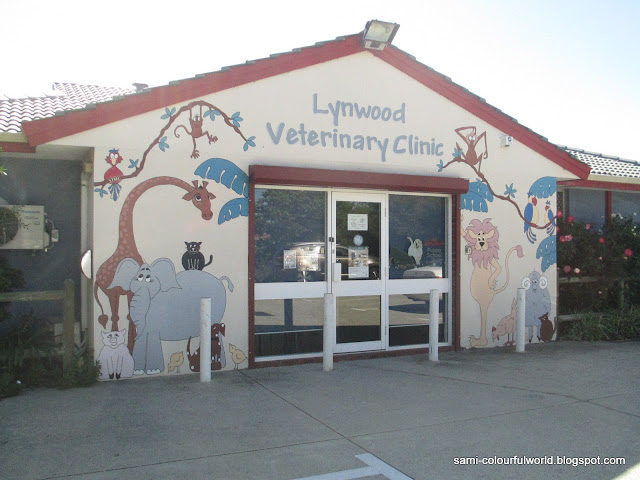 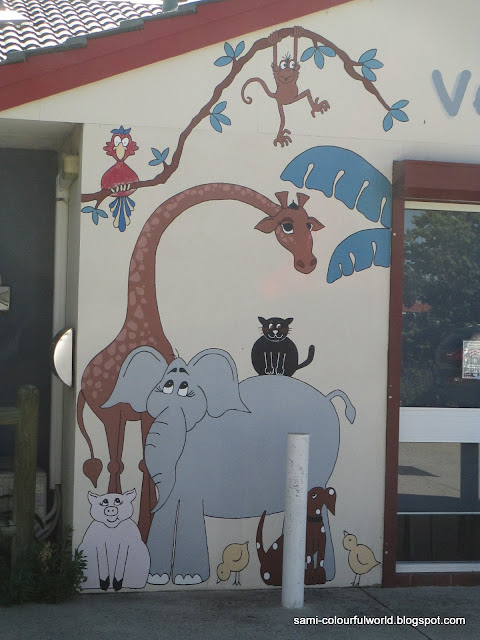 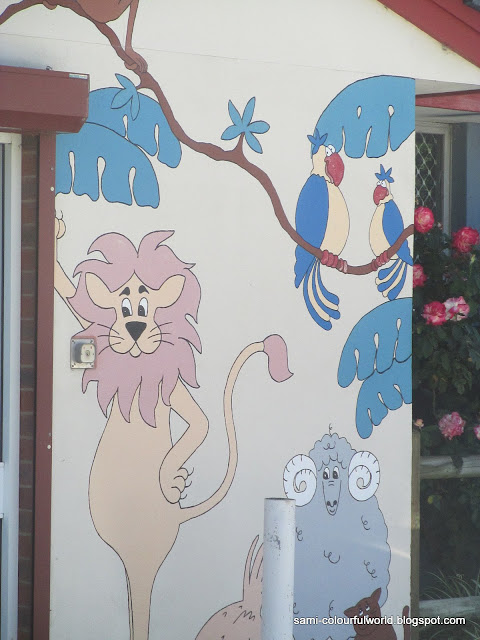 To all Mothers around the World

In Australia, and probably in many other parts of the world, Mother's Day will be celebrated this Sunday 14th May. In some European countries it was celebrated last Sunday 7th May.

With no prior course or training, women do a wonderful job of being Mothers.
Most give up a lot for their kids -  careers, money, sleepless nights, constant worries, etc., and it's usually not until we become parents ourselves that we appreciate the sacrifices our Mother's did for us.

Happy Mother's Day to my Mom, and also to my daughter in law who will be celebrating her first Mother's Day.

And to all the wonderful Mother's around the world "enjoy your day and hope you get spoiled by your children".

When we took the visiting family up North for a short holiday in March, we stopped at the small village of Dongara.

It was a Sunday afternoon, and we stopped at the Pub on the main road (Moreton Terrace) for something to eat. Their restaurant was closed, but they suggested we order something from the Fish and Chips shop across the road, and we could eat at the pub as long as we ordered drinks from them.

While waiting for our order I spotted this mural on the corner wall. It was quite pretty and vibrant. It was painted by Evie Black in 2016, but I've been unable to find out anything about the artist.

For other murals from around the world please follow this link 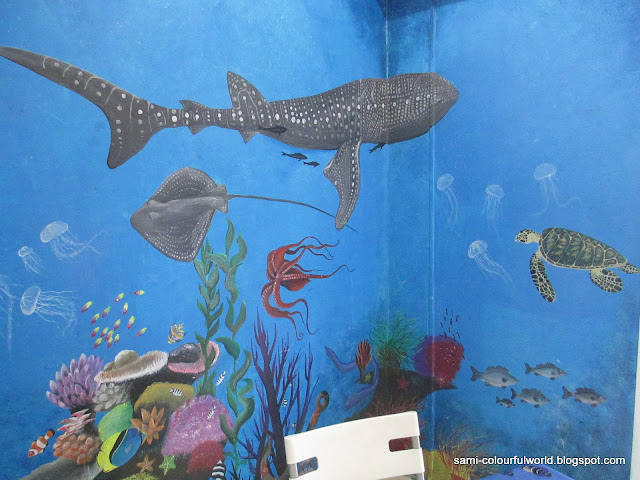 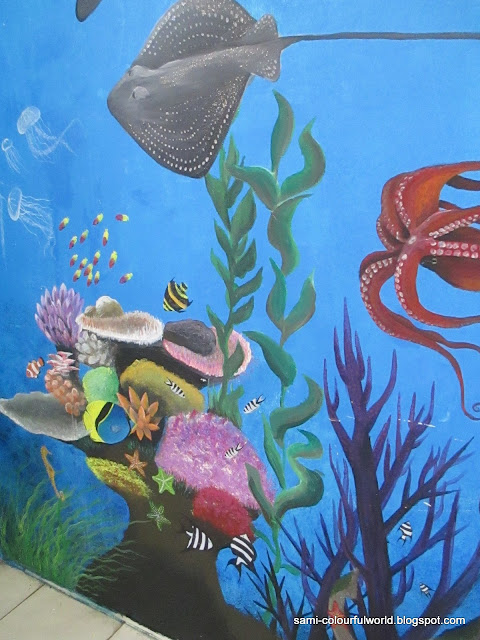 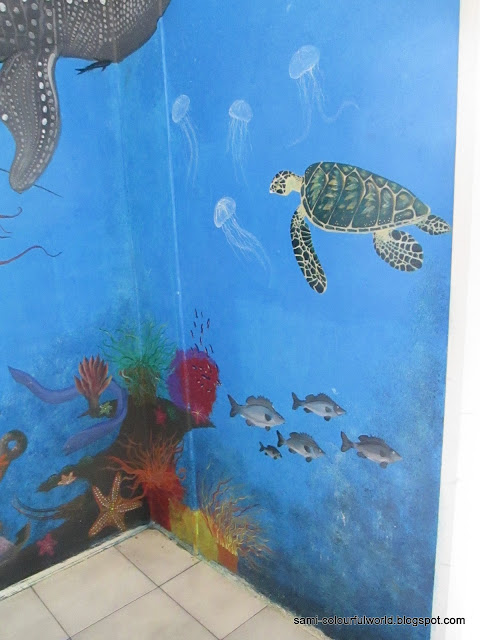 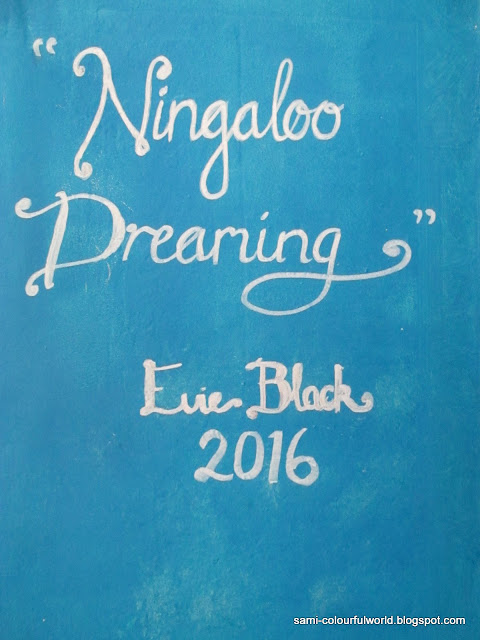 Perth is divided by the Swan River, and Perthites seem to make a fuss about living in the North or South of the River, as if we live in two different cities...
Well actually from the top end to the bottom end of Perth it's actually about 130km, so might as well be two different cities!!

Last Friday 28th April I met up with Grace from Perth Daily blog, at City Beach, north of the river.
Since I live in the South and Grace in the North, it's always nice for me to go up there and see things I don't normally see.
City Beach has had a big revamp since I was last there, probably about 1 year ago, so apart from a lovely catch up over lunch at Clancy's Fish Bar, overlooking the azure Indian Ocean, it was nice to take some photos in the area too.

With 1 month to go until the start of Winter, we are still having fabulous Autumn days, with temperatures around the 25 to 28C mark, and at City Beach there were people sunbathing and even swimming.

The modern sculptures - the Red Circles on the roundabout leading to the beach restaurants, the Here sign on the beach and the Ocean lace, which was first displayed at the Cottesloe Sculpture by the City in 2015 which now stands by the Clancy's Fish bar building.


On the grassy area by the beach a lot of white Corellas's were nibbling away at the grass roots. When I approached to take photos some flew to the trees. Can you see the cheeky one hanging face down?
They are regarded as a bit of a pest because they can destroy trees by chewing off the bark, and they make lots of holes in grassed areas.

If you are on the other side of the world, hope your Spring is also being generous! 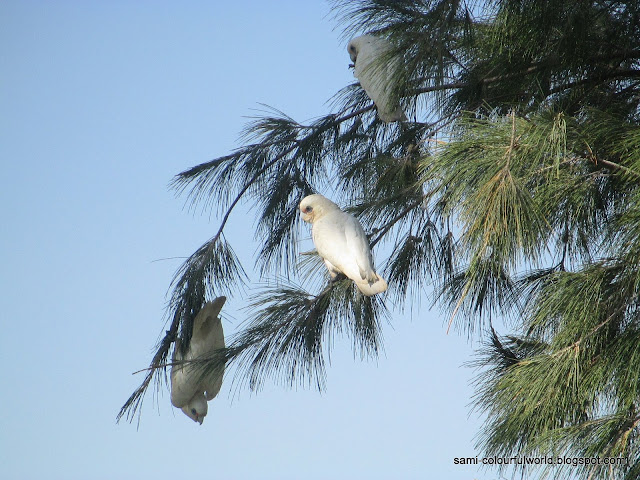 Just last week, on the "Today Tonight" TV program I watched a short film on Perth artist Jacob Butler, AKA Shakey Jakey.  A self taught artist, Jacob has hand tremors and finds himself relaxing while painting.

When I saw the TV documentary, I spotted behind him a canvas with this same mural picture which prompted me to search for it in the many albums of photos taken in Fremantle in recent times.

This mural can be seen on the rooftop of the Many 6160 building (a former Department store now housing a mix of retail and creative spaces and a rooftop event space).
As per Jim's suggestion (see comment below) this could be Bon Scott, the former deceased singer of the band AC/DC.

You might enjoy reading about Jacob and his life story here.
For other murals from around the world please click on this link 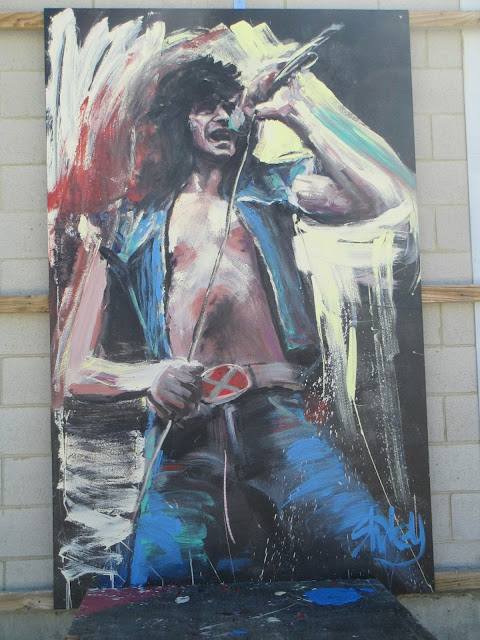 Bon Scott - former AC/DC singer - could this have been the inspiration behind the mural?
(Thanks to Jim) 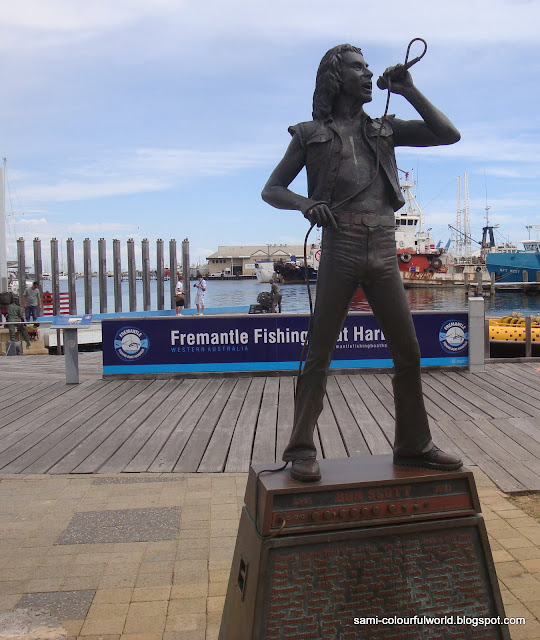