The last post about the Open House Perth is about two totally different types of gardens - The Gardens at Bishops See and Perth City Farm.

Almost across the road from the QV1 building in St George's Terrace you can reach Bishop's Gardens from a side road next to an office tower.
The formal gardens surround a Victorian two storey house built in 1859 for Bishop Hale, the first Anglican Bishop of Western Australia.
The land known as Bishop's See, (originally 5 allotments) was bought with the Bishop's own money, and is located between St. George's Terrace and Mounts Bay Road at the west end of Perth's CBD.
Great care went into the planning of the gardens, with the planting of ornamental trees in the front garden and a fruit garden at the back of the house.
Later a small cottage was built as the Bishop's office and to house visiting clergymen.
In 1875 Bishop Hale took up a post as Bishop of Brisbane, and handed his properties to the Perth Diocesan Trust. Over the years other Bishops took over the occupancy of the house until 1959.
In 1999, this heritage listed property was sold, and subsequently two office towers were built next to Bishop's House (a nine storey and a twenty seven storey building).
In 2010, the Victorian house was converted into an upmarket restaurant - Lamont's Bishop's House.

The gardens are still well cared for and are another green oasis in the city of Perth, and the house and gardens are one of Perth's oldest icons.


Perth City Farm was founded in 1994, located on eastern edge of the Perth Central Business District, next to Claisebrook train station, in the site of a former scrap yard and battery recycling centre.
The site was heavily polluted but was rehabilitated and is now organic certified. It is now a model for environmental sustainability and community engagement, allowing people to come and relax and connect to the land.
There is a mushroom farm, composting facilities, nursery, chicken coops, a Cafe where people meet and talk. They also have a venue they hire for weddings or other functions.
On weekends a farmer's market is held to sell the produce from the farm.
The can be reached via the Yellow cat bus or by taking the train to Claisebrook station, just 2 stations out of the city on the Armadale train line. 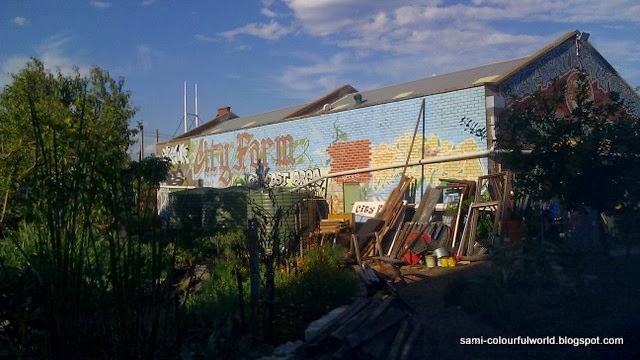 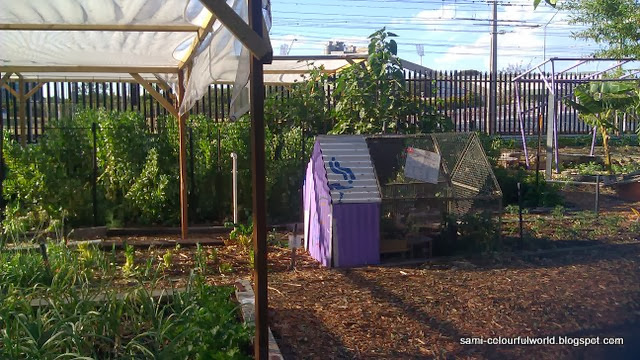 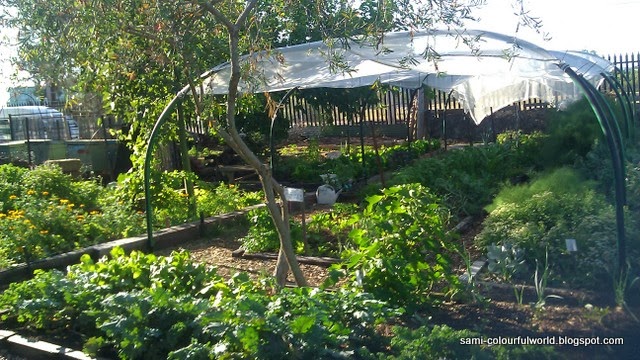 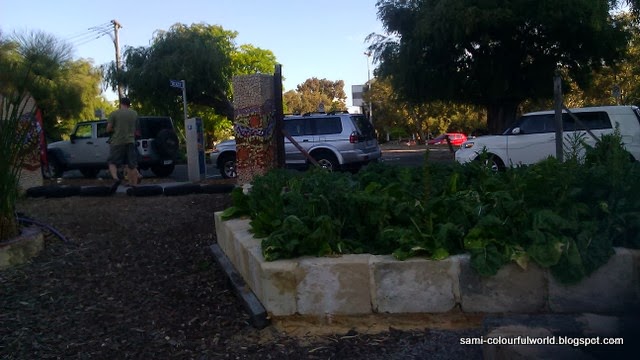 Another iconic building on St George's Terrace (152-158) is Central Park.
In the 1930's the site was home to Foy & Gibson department store. Later the store was bought by another department store David Jones, who moved out of W.A by the end of 1970's. The site was then bought by a joint venture called Central Park Developments. In 1986 the site was valued at $20 million.
It is the tallest building in Perth with 249mt above ground to the top of the communications antenna, and is also the 9th tallest building in Australia.

It was originally planned as a 45 storey building, but after a few modifications and concessions made by Perth City Council, to exceed building ratio, it was finally approved as a 51 office tower.
Construction began in 1982 and culminated in 1992 with the installation of the communications mast tower and cost $186.5 million. The tower has 64,000m2 of office and 3,000m2 of retail space, 1,025 parking bays for tenants with coded cards and 400 for the public.
The building is clad in aluminium and 5000 sheets of glass, which get cleaned twice a year taking up to 3 months due to high winds.

It's a very technologically advanced building with fully computerized air-conditioning, which uses data from sensors on each floor to regulate temperature, there is a central mail facility, conference centre for tenants and a fitness centre exclusive to tenants. The lifts have screens showing the outside temperature and share prices on the Australian stock market.
The outdoor space from which the tower takes its name, is an area of 5,000m2 landscaped park with fronts to William street and Hay street.  It contains seating areas, a fountain and grassed areas. The park area is carried though into the lobby under a glass canopy structure, becoming more formal as it approaches the main entry.

The building hosts an annual stair climbing race up 53 flights from the garages to the roof, which started in 2001, raising money for Multiple sclerosis. Usually only on these charity days is the public allowed to go up to the top floors for the views.

During the Open House Perth, I was lucky to be able to climb up with a guide to the 51st floor, which was being remodeled and be able to enjoy the amazing views from the top.

Next on the Open House Perth tour is the iconic QV1  building.
QV1 actually stands for "Quo Vadis" which means "Where are you going" and the number 1 is the answer - at the top and leading the way - and not Queen Victoria 1st, as is generally assumed, just like I did!

This is true of a building that is a landmark in building technology in Australia, prompting it's designer to describe the QV1 as "the best building he had ever built".
The building on 250 St George's Terrace, was designed by Australia's most awarded architect - Harry Sidler.
Completed in 1991, the granite and glass tower is 159mt high, the 4th tallest tower in Perth, with 43 floors, 38 occupied by offices, 2 plant rooms, basement and sub-basement with parking space and a rooftop floor. There are two levels of retail shops, and landscaped areas occupying 25% of the space, which include a waterfall and pond, where the office workers can relax. It has 18 passenger lifts, 1 goods lift, 1 retail lift, 2 car park lifts and 2 escalators.

Its modern design of angles and curves has a lot of futuristic technology - a reinforced concrete core spanning 21,5mt on each side and columns on the perimeter of the building allow for open space floors with 1650 sqm each without being broken by any internal columns. The sun shading system on south windows saves on estimated cooling costs of $70,000 per year. Each floor has it's own air-conditioning so there is no waste of energy to cool or heat empty floors, there are landscaped balcony gardens on the south side and the top two floor have luxury penthouse offices with landscaped terraces. There are movable "walls" that run on tracks in each floor that enable the making of bigger or smaller venues.
A fully equipped gym, tennis courts, showers, bicycle lock up facilities and 360 degree views add to the well-being of it's tenants.
The imposing entry lobby is 14mt high with marble floors and travertine clad walls.

The super quick lifts took us to the 37th floor where you can see an example of a curved stair case that softens the hard angles of the building. 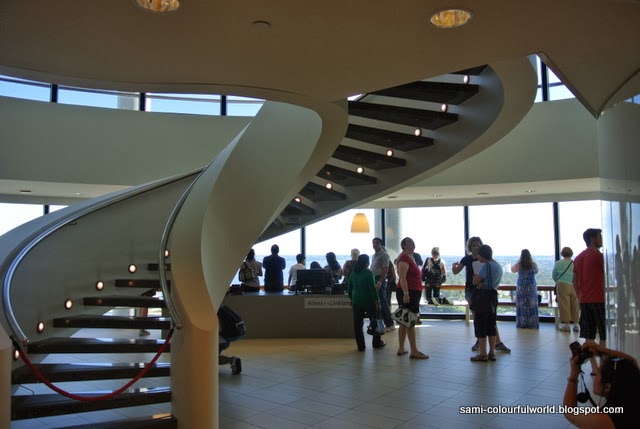 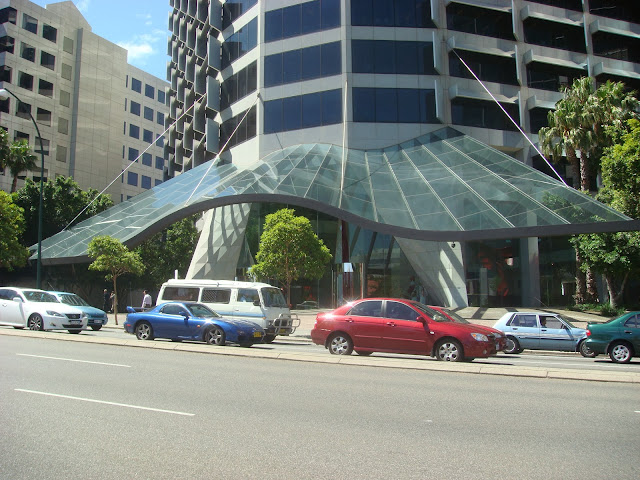 Next post will be about the tallest building in Perth - Perth Central. Hope you enjoyed getting to know QV1, an amazing piece of architecture and modern commodities.

After my visit to Council House, as part of the "Open House Tour" on Sunday 3rd, just down the road at 45 St George's Terrace, I entered a large old building that had an "open house" flag outside.

Having previously housed the Reserve Bank, and still containing the huge vault, "Spacecubed", is now a 550 square meter innovative space and brainstorming room.

Spacecubed is an interesting concept that allows people to pay a monthly fee, and as per their needs make use of a "hot desk" (meaning it can be used by various people at different times), or a permanent desk and access to meeting and seminar rooms right in the city centre.

It is a space where entrepreneurs can collaborate, co-work, network, mentor and brainstorm under one roof, and members can encourage each other with ideas and support for projects, designs or businesses. 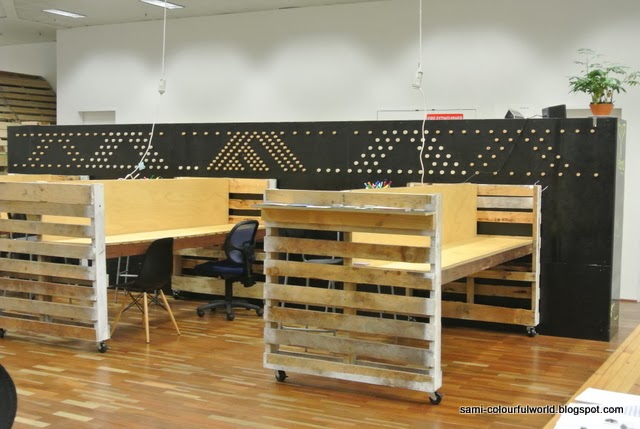 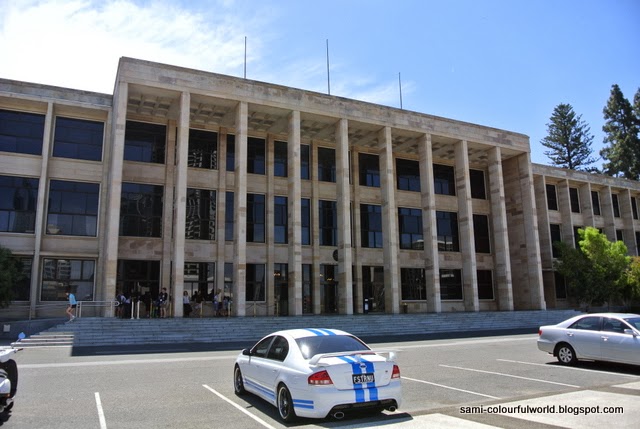 There was a short queue, as a maximum number of people were taken in at a time for the guided visit.
Construction of this building began in 1902 and finished in 1904, using local materials - stone from Rottnest island and Donnybrook, Jarrah for the woodwork and clay tiles.
Extensions to the building were made in 1958, 1978 and 2002, making the building a square shape with a courtyard in the middle. There is a big collection of art painted by local artists with WA scenes. 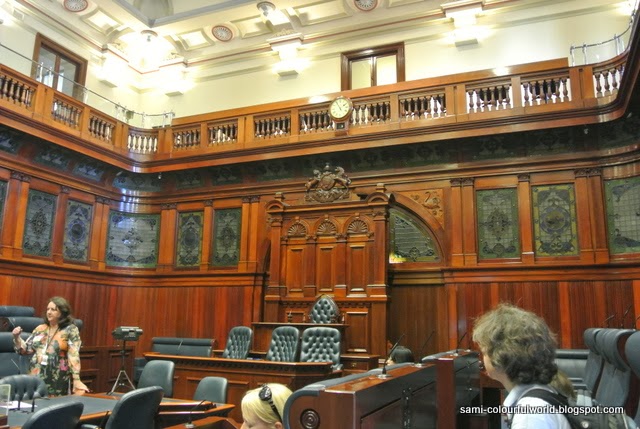 A grand library is also available to members with all sorts of books and where typists transcribe what is written in the parliament sessions into documents that are made into big books. The librarians also do research for the members when they need extra information for their discussions. 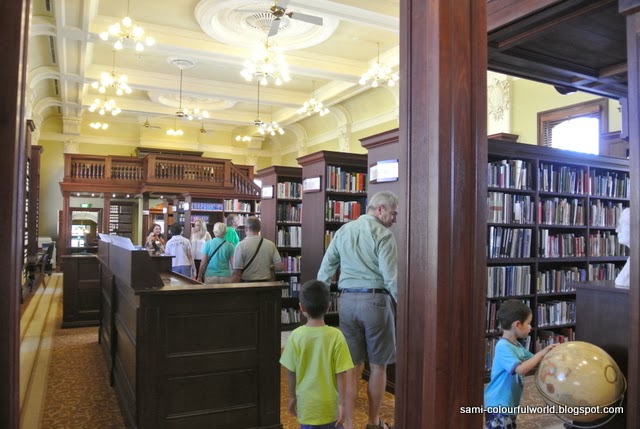 There is also a meeting room for Aboriginal members of Parliament with Aboriginal Art hung on the walls and the windows and doors are framed with specially designed glass.