This weekend I made some of the DIY presents for the ladies, and a few days before Christmas I will make a few jars of spicy or candy nuts for the men, so they are nice and fresh.

One of the blogs I follow for Paleo recipes has some recipes for natural cosmetics and I made Foot Balm from Elana's instructions and from another blog I made Body Lotion Bars and Lip Balm.

All quite easy and rewarding to do, I just had to go and buy beeswax, that I found at an Art shop, and Cocoa butter and essential oils at the local health store.
I found some small plastic containers at Red Dot (a cheap novelty store) for $1 and a travel pack for $3 with among others, 3 tiny jars ideal for the lip balm.

Here are the recipes:

Melt a 1:1:1 ratio of the first 3 ingredients in a double boiler (small pan inside bigger pan with boiling water).
Stir well, and remove from heat
If you are using them add the Vitamin E oil (I didn't use it) and the Grapeseed oil. Add about 25 drops of the essential oil of your choice.
Pour into silicone moulds. Let the bars cool for a few hours and unmould.
To use them rub the bars between your hands to soften the bar enough to use over your body.
They are good for people with eczema and very dry skin. 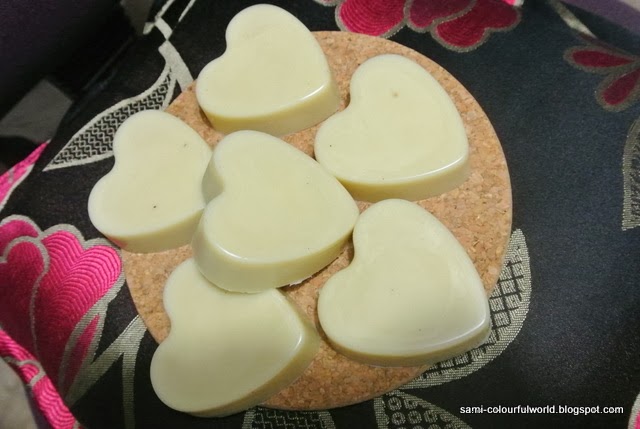 I also have some beautiful almost good to eat soaps made by Mamie Fidler which I bought from her site to supplement my home made goodies. I usually made my own soaps, but just plain ones, nothing as fancy or colourful as these ones below.

At this stage of my life I feel I have far too many possessions and have no need for much of anything, so it's a bit difficult when people ask what I would like for Christmas, as I really don't need anything, and I would rather people donated their money to Charity.
At Christmas time I always donate to "Cat Haven" who do a great job of saving cats from euthanasia, and they were the ones that helped me adopt 5 out of the 8 kittens that were born from the two stray cats that adopted us, back in 2007.
Another charity I like to help is "World Vision". In Australia you can find representatives in some shopping centres and from as little as $5 you can help buy pencils for students in poor communities.
I like to give a gift of "goats" for $40 or "piglets" for $50, which I know is going to benefit a community somewhere in the world!

Do you make your own gifts?
Do you think the gift recipients appreciate home-made gifts?

Last year I went to the city to watch the Christmas Pageant, but went too late and landed up hanging from a statue with a friend to be able to see some glimpses, and halfway through the parade my camera's battery went flat...

This year I was better prepared! I convinced my family to be in the city by 5,30pm so that we would be able to sit on the edge of the pavement - first row seating, and my battery was fully charged!

The 42nd Perth Christmas Pageant was held on Saturday 7th December, on St George's Terrace, over a 1,4km long stretch of road. Starting time was 7,30pm lasting for about 1 hour.

Even arriving at 5,30 we only got a second row "seat". There were 4 of us, and we had taken 2 beach chairs and a picnic blanket and a small "esky" (cooler box) with food and water.
There was a cool breeze, and halfway through our wait my husband and I decided to go to Target on the next street and buy some polar fleece bed throws for all of us.
When we returned the pavements were all so blocked up by people that we struggled to return to our seats, and people were wary of letting us go past fearing we were just trying to get to the front and cheating them out... Crazy!!

We ate and chatted, and watched the street entertainment until the much awaited parade started.

Close to us some celebrities were being interviewed - the Lord Mayor of Perth - Lisa Scaffidi (in the violet jacket) and Samantha Jade, the tiny Perth singer who won X-Factor 2012, and who was the Pageant's start attraction.

Just after 7,30 the first floats started coming our way and the crowd perked up.
The parade was made up of floats representing children's stories,  of dancing schools, gymnasts, some communities like the Chinese, South American, Taiwanese, etc were also represented. 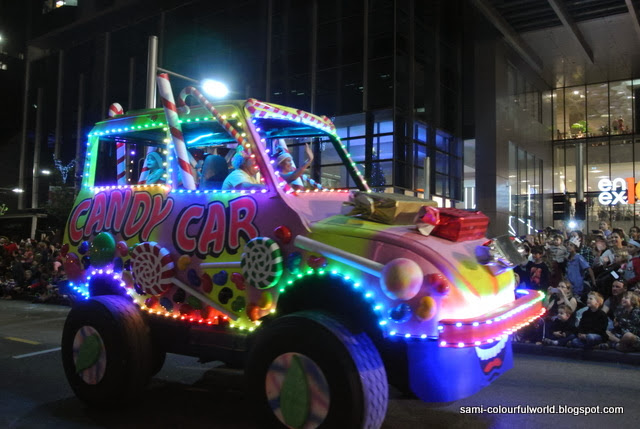 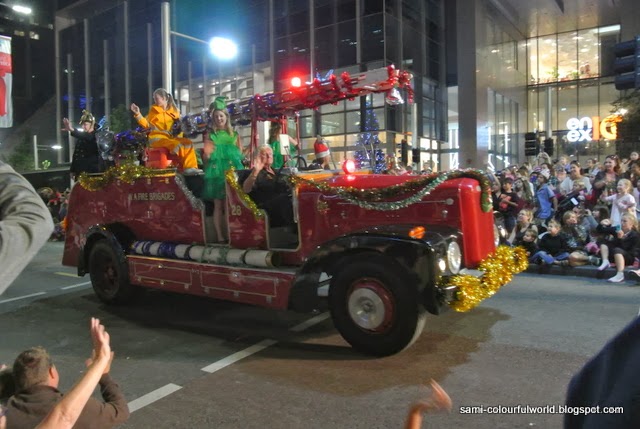 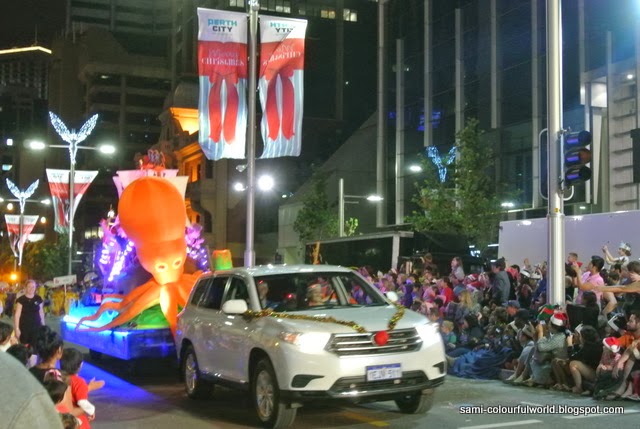 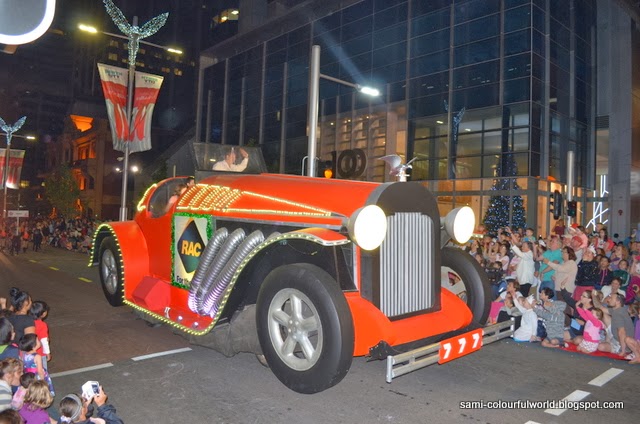 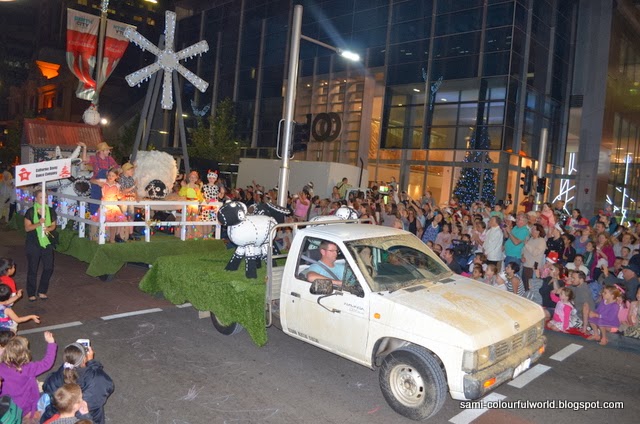 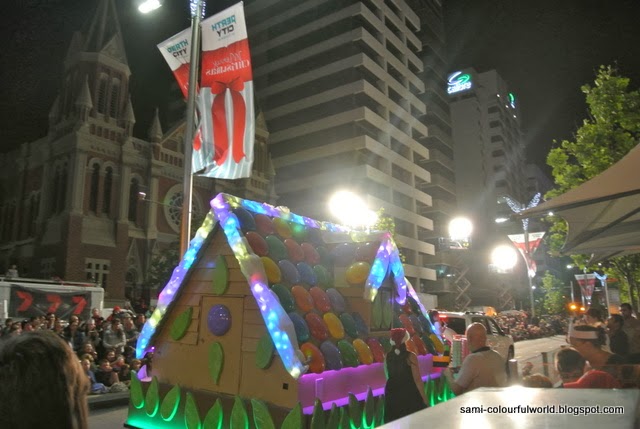 We all enjoyed the show, the only downside was that we sat near a rubbish bin and once in a
while the wind would blow the awful smell to our side....not pleasant! I don't think I will convince the family to go again next year... And we also had a lady that although she was sitting "front row" insisted on standing up most of the time while taking photos and blocking my view...

When Santa's carriage came by, it was the end of the parade, and everyone suddenly got up and started running towards the nearby Esplanade train station.
The crowd moved quickly though, as there was no need to pay for tickets. The trains were coming every 5 minutes, and my husband and I managed to get onto the first train that stopped, but we lost sight of our son and his wife, who only managed to get onto a train 15 or 20 minutes later. 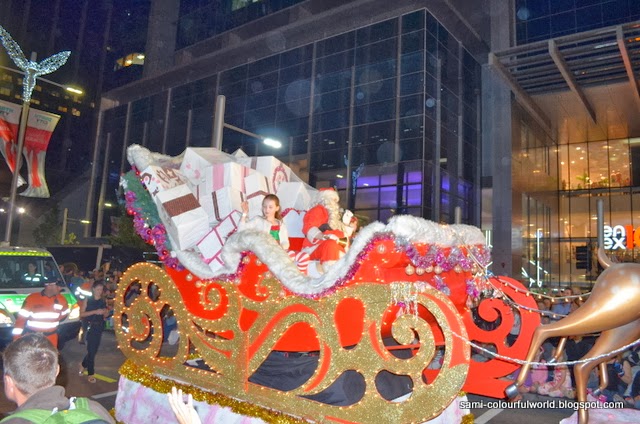 Do you have Christmas pageants in your city? Do you watch them or do you feel they are just fun for the kids?
I had fun, and I think the atmosphere is half the fun, but I don't think my family was too impressed with the time spent sitting there, so it might be the last time I have their company...

It's been a very busy couple of weeks....Where does the time go? Is it me or does everyone feel that November and December just fly by in the lead up to Christmas?

A few weeks ago I got to meet two bloggers for coffee at the iconic Indiana Tea House in Cottesloe beach. Iris was coming from Braunschweig, Germany to Perth to get married to her sweetheart of 19 years and I offered to meet up with her and Grace, another Perth blogger that I also follow but had yet to meet. We had an enjoyable couple of hours getting to know each other.
From one of my first posts you might remember that I lived in Braunschweig for almost 6 years in the Eighties, and both my kids were born there. It was while looking for photos from about Braunschweig, that I came upon Iris blog and I read that she had also spent some time living in Perth a few years ago.

Iris had traveled around Australia and been to Perth a few times already, but she had yet to visit Penguin Island, so I offered to take her and Ingo there the following week.
I picked them up at South Perth after my morning working shift and drove about 48km to Shoalwater, near Rockingham from where the ferry to Penguin Island departs.
Tickets cost $22 which entitles you to the short 10min ferry ride and entry to the Penguin Discovery Centre to see the penguin feeding.

There is a sand bank from Shoalwater to Penguin Island and many people crossed the short distance on foot (about 700mt) but a few years ago some people were caught in the high tide when returning and died, so there is a sign saying not to cross, but I see some people still take chances.

We were in time to watch the last feed of the day at 2,30pm, and eagerly awaited while watching the antics of the penguins. Some just looked at us with curiosity, others swam rapidly around the pool....
The "Little Penguins", "Blue Penguins" or "Fairy Penguins" in this island are the smallest of the species with about 33cm height, and they are found in the southern coast of Australia and New Zealand.

The island has around 1200 penguins that go out to sea to fish before sunrise and when they return after sunset they hide in burrows in the island. They are very shy creatures or maybe just cautious.

There are about 12 penguins in the Discovery centre, which were rescued due to injury. Some of them when rehabilitated are returned to the wild, but they have discovered that others get so used to the feeding of "dead fish" that when once they introduced live fish to the pond, most were actually scared to go into the water, and the ones that went in, actually swam away from the fish. So they certainly wouldn't be good candidates to be released into the wild as they wouldn't know how to catch their food.

Little Penguins can live up to 20 years in captivity, but only around 8 years in the wild.
The island is closed from beginning of June to middle of September, when the penguins 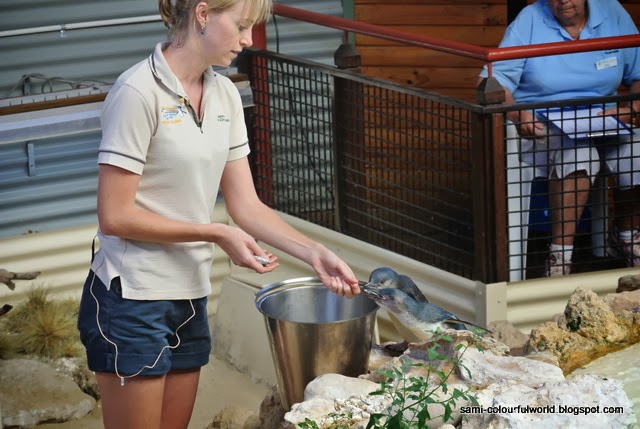 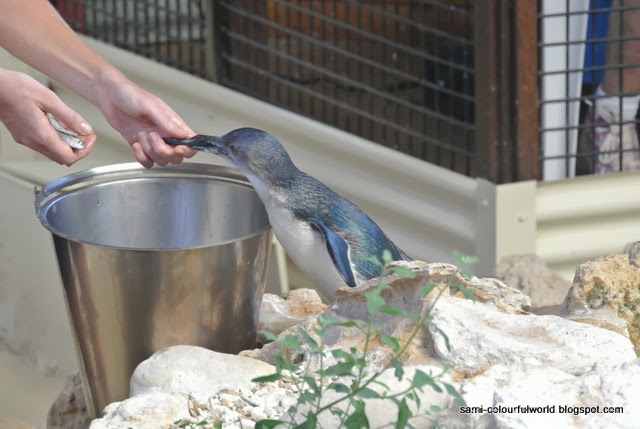 The island is a protected Marine park, with lots of wildlife, such as over 50 species of birds, sea lions, dolphins, pelicans.
Swimming and snorkeling are allowed, and there is a shaded picnic area with tables and benches close to a small beach ideal for children to swim, while the parents relax. There is no coffee shop in the island, so bring your own food or get a supply on land next to the ticketing office in Shoalwater.
There are other longer tours available, such as a Penguin and Sea Lion tour, dolphin tour, sea kayak tour, and tickets can be purchased at the Shoalwater counter.

The island is covered by wooden boardwalks and you should not deviate from them to protect the environment. There are some fabulous lookouts too over the ocean and towards land. 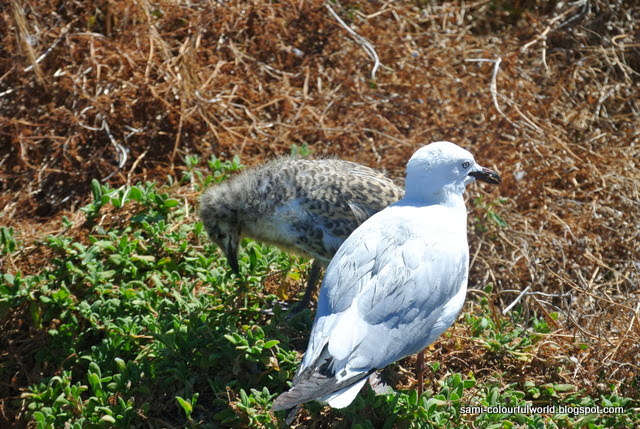 We saw a lot of recently born birds still with soft down, and the Pelicans were also breeding at the top of a cliff, with the access to them boarded up, so that they wouldn't be disturbed. 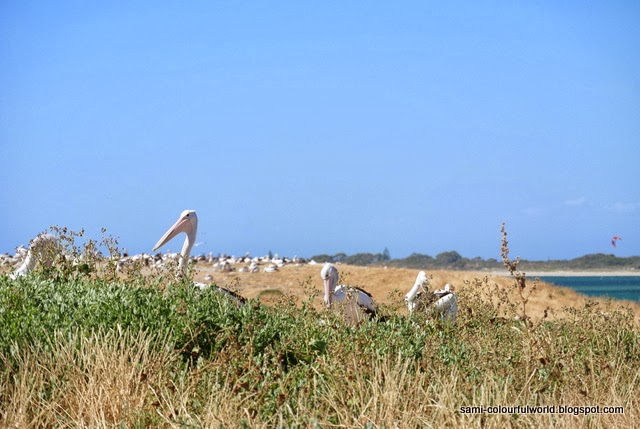 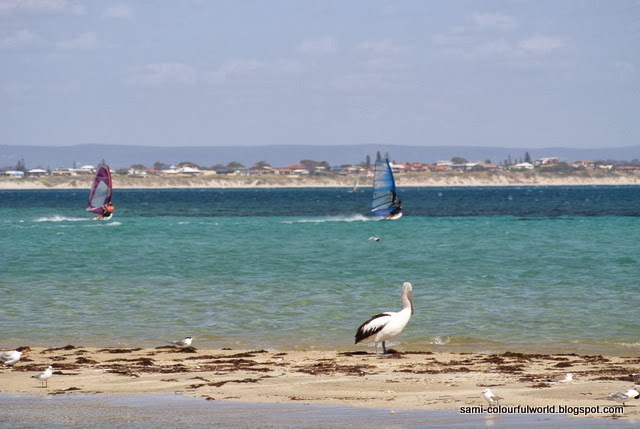