A fun day in Fremantle

Had my day off work today, and together with my daughter in law we drove to Fremantle to photograph murals, have lunch and enjoy the sunshine.

After driving around I spotted this ginormous cruise ship, so we had to go and take some close-up photos! 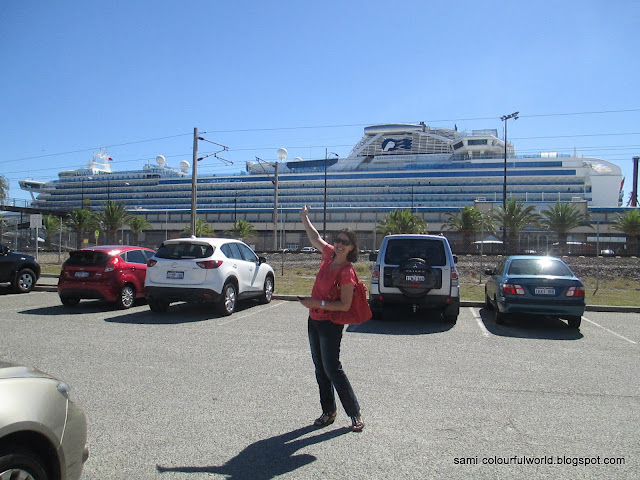 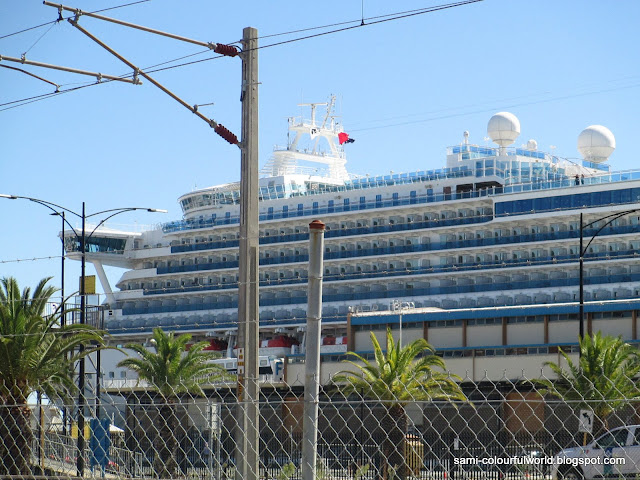 We parked the car and took some photos. The cruise ship Diamond Princess - on a 12 night cruise ending in Singapore, was docked right here in Fremantle!Check out the amazing deck plans, 17 or 18 floors of fun.
Pity that due to security reasons no visitors are allowed.

Just before returning home we stopped at the Riverside Road "Dome Cafe" for a cold smoothie.
With beautiful river views and the warm weather, their esplanade was just the right spot for some relaxing time. It actually felt as if we were on holiday. Oh bliss...
Far away I could see the cruise ship...

On the river close to the Cafe was this quirky boat, which I presume is a house boat. It reminded me of house boats I saw in Amsterdam last year, although this one a bit smaller. 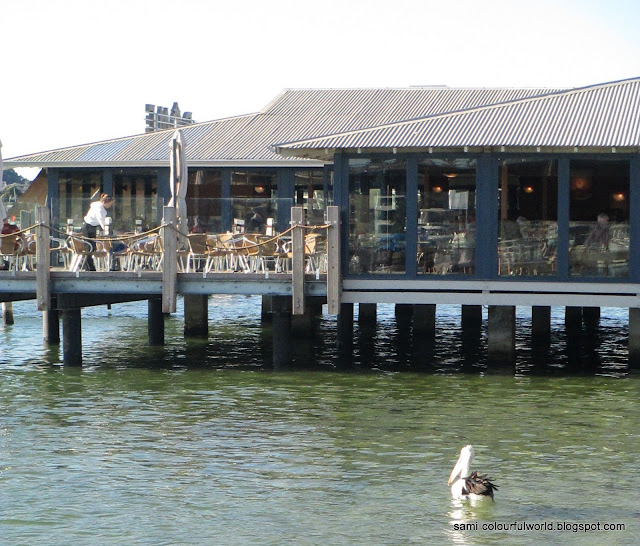 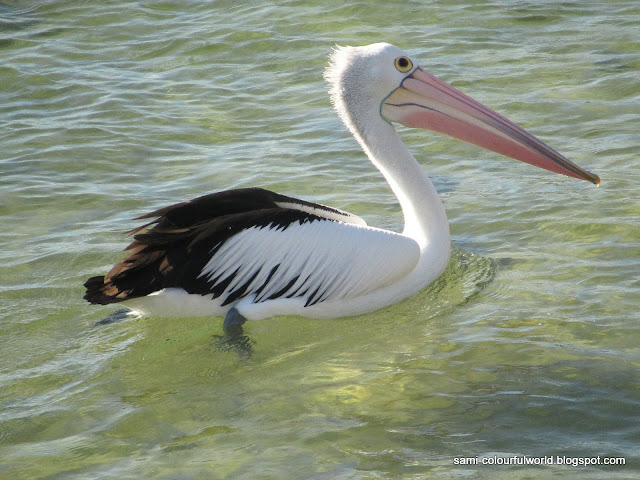 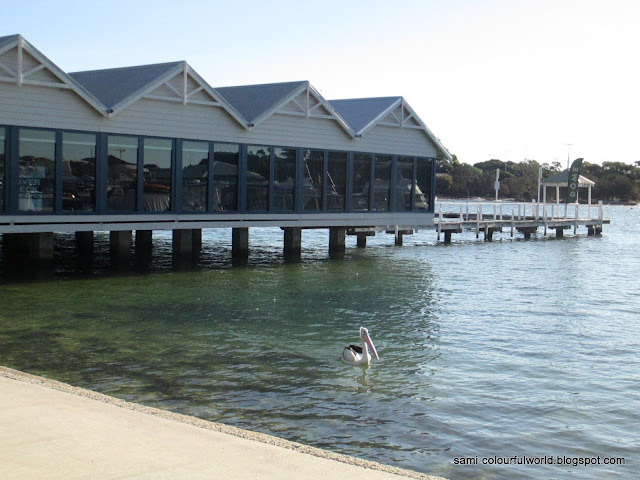 When we left the Cafe (above) a cute Pelican was picking his food off the rocks in the river margin. 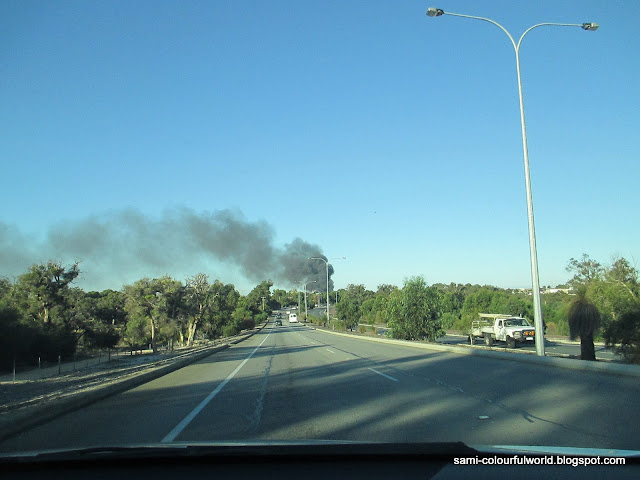 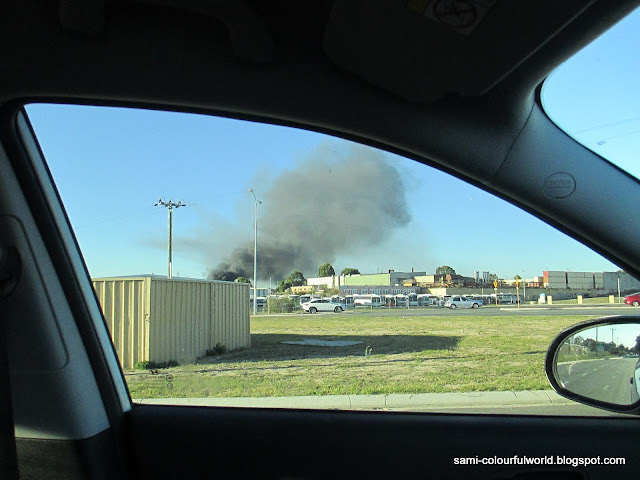 When I dropped off my daughter in law at her house I noticed a cloud of black smoke near their residential area. I later learned it was a fire that destroyed a factory. Not good!

Well, I'm now dreaming of a cruise holiday, maybe sometime next year when I get my long-service leave. (8 2/3 weeks).
Have you had any interesting cruises?

On a drive along the coast I came across this mural when we stopped at a traffic light in North Fremantle. 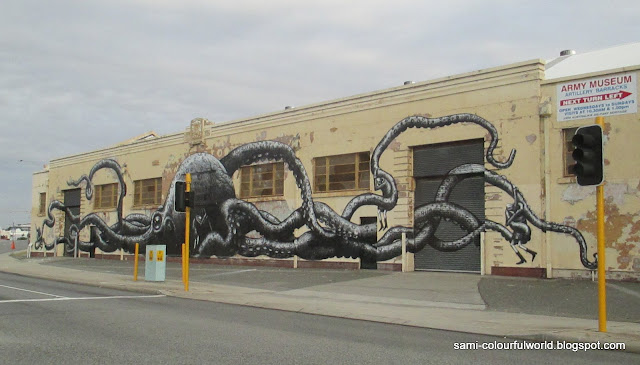 This was one of the murals painted for FORM Public2015, by Welsh artist Phlegm on the walls of the old Naval Store, located at 141 Queen Victoria Street.

For other murals from all over the world click on this link.

I can't believe Form2016 is almost upon us...from the 1st to the 17th of April, so a lot more murals coming up all over Perth!
Hope you had a great Easter weekend, we had a very long weekend from Friday to Monday, so for us working folk it will be a short working week, yay!
Enjoy the rest of the week.

Birds in the garden - the naughty ones!

Fig season is almost over, but these cheeky birds are making sure they're getting the last ones in our fig tree that is in our front garden! And they aren't quiet while they do it either,
I assume they are just making happy noises as they eat away at the ripe figs.


These Rainbow Lorikeets are so naughty they don't even bother to fly away when we get close to them, they just carry on eating...

One of these days I shooed them away before getting into my car to drive to work, and they flew to the park across the road.
Would you believe it, that as soon as I was a few hundred metres down the road I saw through the rear-view mirror that they were flying across the road again to the fig tree!

I quickly reversed and got back in the driveway and had to get out of the car, wave my arms at them and wait for them to fly away again to the park.

I can just imagine they would just return as soon as I turned the corner... laughing at me while they merrily ate my precious figs.


Lorikeets feed mainly on fruit and nectar so they are considered a pest by farmers.
I bet they'll be back for our loquats in September!!

While I was writing this post I remembered a visit to the Perth hills a couple of years ago, when while having a picnic in a park, these colourful birds joined us at our table, ate food we gave them, flew on to my husband's head... No fear of humans whatsoever!

These parrots are similar to the Lorikeets, but are called Australian Ringneck, and are native to Western Australia.

I wonder if you've come across such cheeky and unafraid birds?

Email ThisBlogThis!Share to TwitterShare to FacebookShare to Pinterest
Labels: Birds 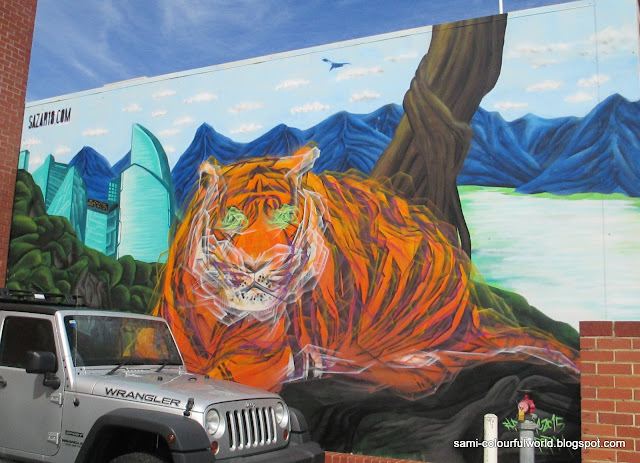 It seems I'm following with the zoo theme from my last post with this giant tiger mural that
I found on one of my visits to Fremantle, when my parents visited in December.

Located on a wall at 20 Elder Place, Fremantle and painted by Australian muralist Sazar,
for Public2015.

To check other interesting murals from around the world follow this link.

Around Perth with my Parents - The Zoo

Before coming to visit my Dad had read somewhere that Perth Zoo (in South Perth) was an unmissable visit.
I must confess in my 9 years in Perth, I had never visited Perth Zoo!
On one of my many visits to Adelaide I had visited their Zoo once, and that was because I wanted to see the Pandas (only ones in Australia)
Otherwise, I'm not a great fan of Zoos. I always thought the animals looked too confined and sad... 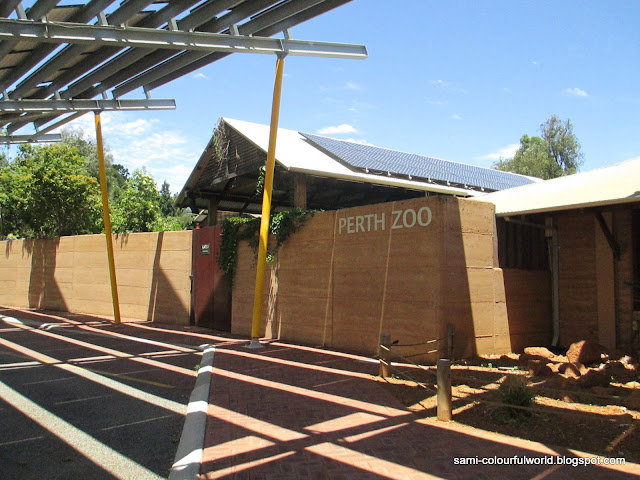 But I must say that after visiting Perth Zoo I was pleasantly surprised that zoos, or at least Perth Zoo is a modern and progressive zoo involved in the conservation of the various species.

We only had about 2 1/2 hours on that Saturday, as we were then meeting a friend for lunch, which just wasn't enough time to see everything. Also it happened to be a very, very hot and humid day (heat is normal in Perth, but not humidity) and it made for a very uncomfortable visit, as well as a lot of the animals, even the Australian ones seemed to be in hiding...probably cooling off inside their "houses". So sadly no Tasmanian Devil or Dingoes ...that were on their wish list!

The Zoo is divided in various areas according to the animals habitat, so we just wandered around with the map in our hands, took a little train too to get us faster to a certain spot too. 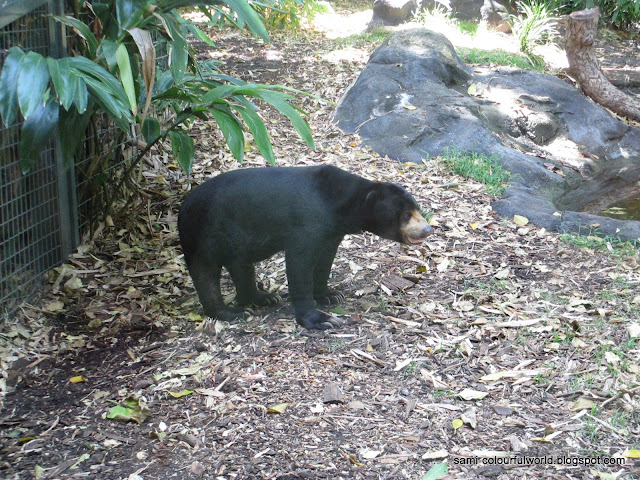 The two solitary Sun Bears in the zoo were rescued from Cambodian poachers when they were cubs.
They spent a few years recovering at a Free the Bears centre before coming to Perth Zoo.
Due to their distressing start in life, the bears still have a pacing behaviour. The Zoo staff try to enrich their lives with food puzzles, daily training and interaction with the keepers. 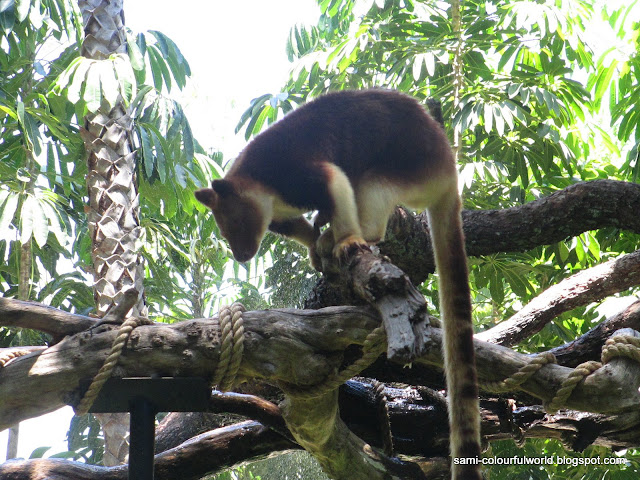 The Goodfellow's Tree-kangaroos - I was quite surprised at this animal, having never seen or heard of it! Originally from Papua New Guinea, it's also a Marsupial,  with a tail similar to a kangaroo's long tail, but live on trees where they are quite agile. 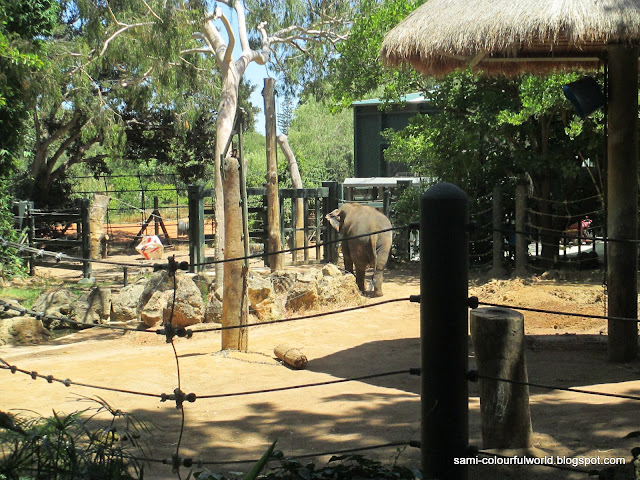 One of the two Asian elephants in the Zoo - Tricia is the eldest having  just celebrated her 59th birthday in January. She's the the zoo's longest resident having come from Singapore in 1963. 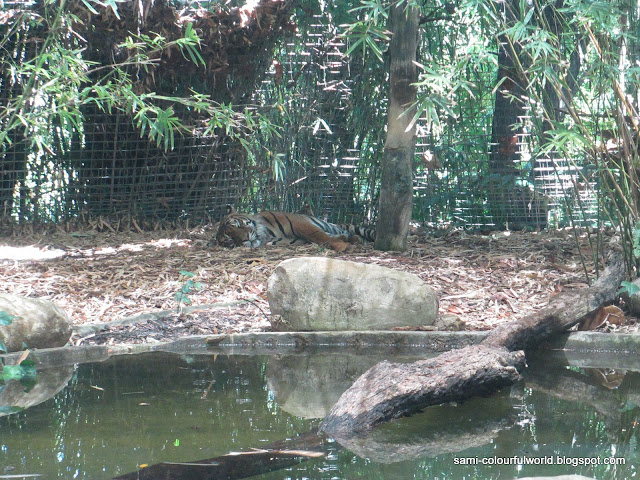 One of the Asian tigers relaxing under the shade of a tree.  Sadly tigers are also getting extinct due to illegal poaching and trading of body parts for traditional Chinese medicine.
Only about 300 to 400 Sumatran tigers exist in the wild, soon tigers may only be found in captivity... 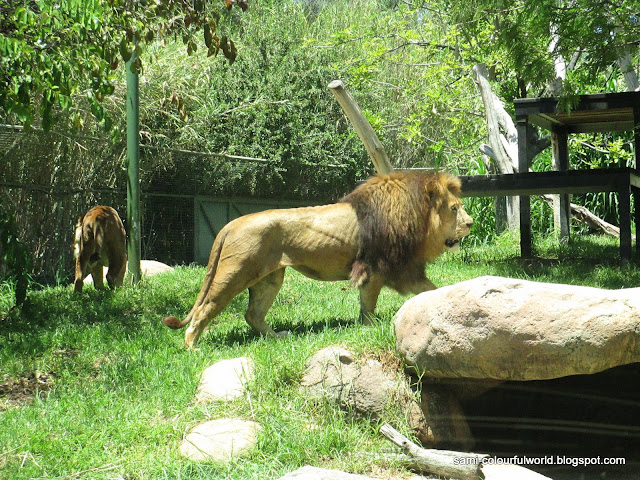 The big Lion in this photo was showing his age, but at over 150kgs he's still a mighty beast! 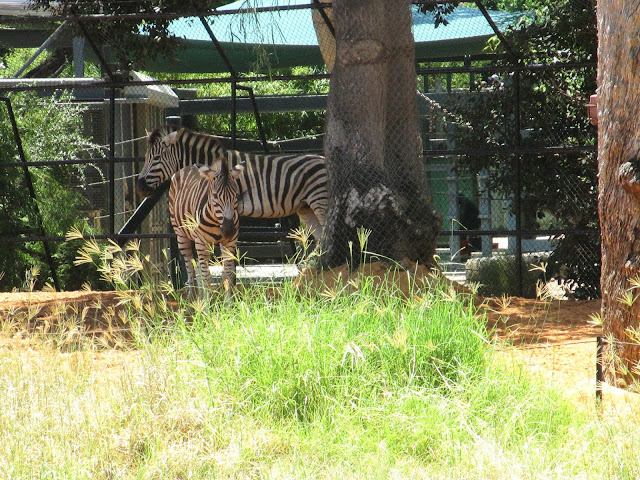 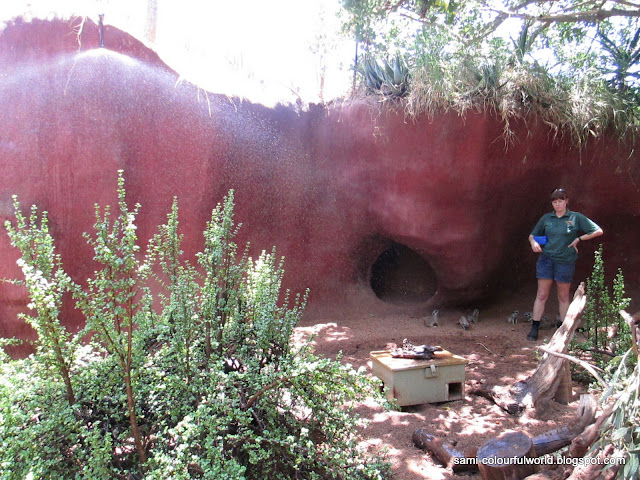 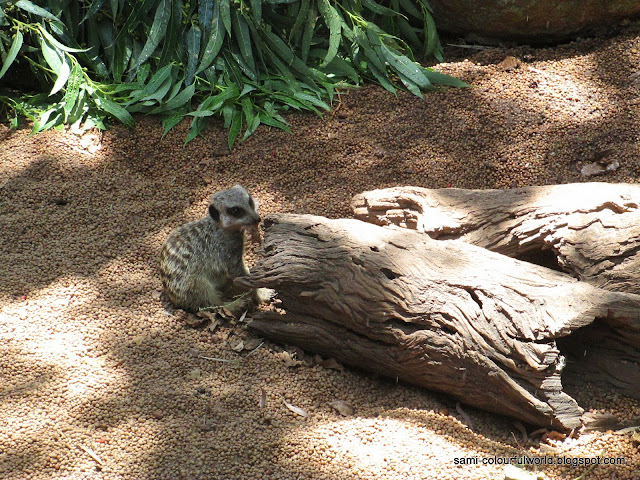 The Meerkats were being fed and were running around from the keeper to their various hiding places. They are so cute, one of my favourite animals! 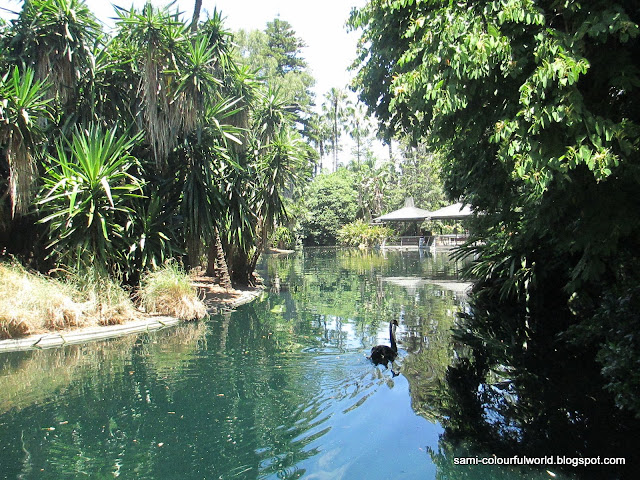 There are plenty of bird friendly ponds and plants, and the Zoo also has many native plants as well as native plants from other areas of the globe distributed in the various animal zones, so apart from being a zoo they are also a sort of botanic garden. 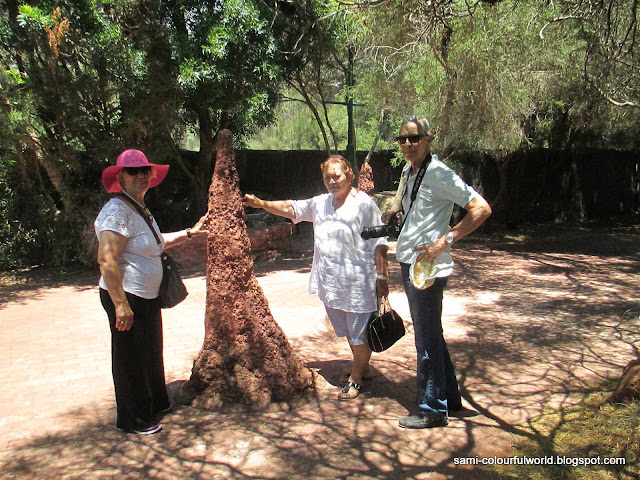 Before leaving we visited the Reptile enclose (I won't bore you with photos of snakes and other horrible critters that I don't like either....). The photo above if of my parents and friend touching a replica of an ant mound that can be found in many parts of Australia.
I've come across some much taller and wider than that one...

And lastly we couldn't miss a visit to the Little Penguin's enclosure. A 50 thousand litre saltwater pool with limestone reefs and beach areas with coastal vegetation is available for the penguins to swim and enjoy a relaxing life. The area is covered by a net to protect them from bird predators. Visitors can see them being fed daily at 11am. 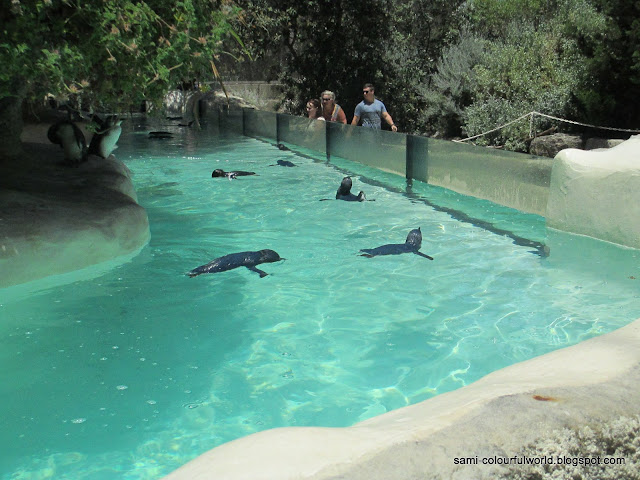 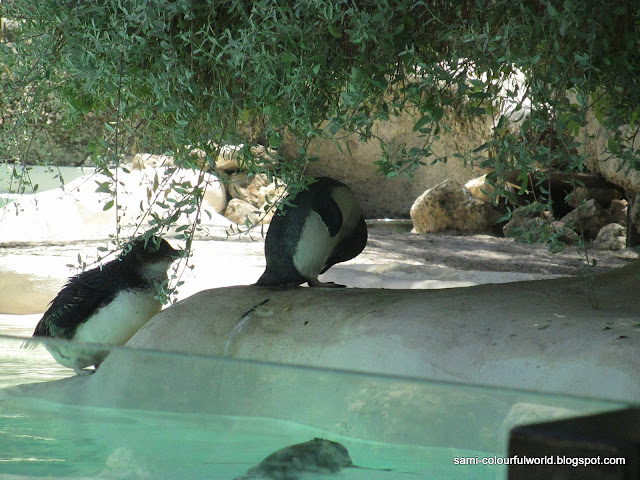 Lucky Penguins, with that heat the pool was probably the best place to be!!

And it looks like I might have to return for another visit when my next set of visitors come in December...

Entry is not cheap though... adults $29 and seniors $22, so next time we might have to spend the whole day there to make the most of the entry fee.

I'll leave you with a YouTube video about Perth Zoo.  Hope you have enjoyed the visit.

Around Perth with my Parents - Penguin Island

Back to my visits around Perth with my Parents!

After our short holiday down South I had to return to work as we were short-staffed, but during the Christmas period I managed to get a day off here and there and then I would use the day to show my Parents a few interesting things further away from Perth...

Penguin Island
On one of those days I took them to Penguin Island, a tiny island just across the Indian Ocean from the suburb of Rockingham.
The last time I was there was in November 2013 with my German blogger friend Iris and husband Ingo, and although I've been there a few times I always enjoy it!

Penguin Island is not habitable, it's just a haven for Penguins and birds, and the staff leave the inland at the end of the day.
The island has beautiful beaches, but if you want to spend the day take a picnic as there's no food available on the island.
The island closes from June to September during breeding season and is also closed on the 25th December.


Ferry
The ferry crossing takes about 5 min, although we spotted some people walking across the sandbar, which can be dangerous. A couple of people drowned a few years ago, during high tide and strong winds...
The ferries operate from land to the island from 9am to 3pm only, on an hourly basis.

Hope you enjoyed the visit to Penguin Island and learnt a bit more about the Fairy Penguins.