On Friday 21st June I took an extremely early flight from Perth to Sydney at 5,30am, to enable me to be there by 11,30h (4h flight + 2h time difference) so I could still have some time to walk around at leisure. My son's wedding would be on Saturday, so there wouldn't be much more time to wander around...
I would be joined later by my husband, who would be flying from Adelaide after work.

My son and his bride picked me up from the airport and took me to The Oaks Goldsbrough Apartments near Darling harbour, our home for the weekend.
I checked in and was quite surprised at value we got for the wonderful location - the hotel has a walkway to Darling Harbour which meant we could be in the middle of the action in a few minutes. There was a Car park next to the hotel where the car could be parked for $25 a day, and of course we had asked for a harbour view room, which meant we had a wonderful panoramic view of the city centre.
After check-in the three of us went for lunch at Adria restaurant in the harbour. After lunch the bridal couple left as they still had some errands to run, and armed with my camera I went sightseeing. This would be my third time in Sydney, but still some things are worth revisiting!

First, I took a ride on the Sydney Monorail. After 25 years, it is going to be demolished to make way for a new Convention Centre. The last trip it would take would be today, 30th June, so I too wanted a farewell ride around town.

After going twice around the circuit I got out at the Queen Victoria Building station. Originally the site of municipal markets, the building was restored in the 1980's to house three floor of upmarket shops and beautiful cafes. The floors with tessellated tiles, columns and beautiful stained glass windows add to the charm. Even if you don't want to spend big bucks, you can always sit at one of the cafes and absorb the atmosphere or walk around and soak up the beauty of this wonderful building.

After a few hours walking and with sore feet I returned to the hotel to await my husband's arrival. My son had booked a dinner table for 8 pm. for some of the bridal party at Gloria's Restaurant, in the suburb of Petersham where there's a big Portuguese community.
It was close to 7 pm when my husband called on his way from the airport to say he was close and I went downstairs to wait for him and then just climb into the car and drive away to the restaurant.
Dinner was lively and the food was delicious. It had been ages since I had the Portuguese Meringue Pudding so had to end my meal with this most decadent of puddings. 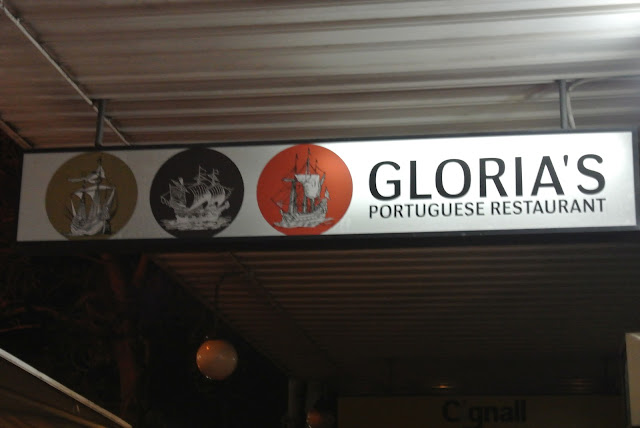 It was late at night when we returned to our hotel for a well deserved rest.
We would have an early day on Saturday for our son's wedding!
That will be in the next post...

I have been busy at work and home, as we have our son's wedding this Saturday.
It will be a small wedding with just 25 people, but we don't have any family in Australia and the bride only has a couple of uncles, aunts and cousins...
I didn't have much to organize apart from buying my dress, shoes and bag for the event, a tie for my husband to match my dress, have my nails and hair done....usual stuff a lady needs to look good on a special day!

But I didn't want to miss the fact that my blog is also celebrating it's second anniversary, with my first post having gone to air on the 18th June 2011.
So I wanted to thank all my readers and blog friends for their support. I have enjoyed these two years, and have learned a lot through having to research for the A-Z of Australia series. I have also got to know some lovely bloggers across the world and have learned new things from their blog posts.

I hope I can celebrate many more blogging years and count on your support and friendship.

Thanks for being my friends! See you soon.

Email ThisBlogThis!Share to TwitterShare to FacebookShare to Pinterest
Labels: Blog

Raising Awareness for the Homeless

Although Australia is known as the "lucky country" and has a high standard of living compared to most other countries in the world, homelessness is also a reality here.

According to the latest Census of 2011, 0,5% of the population is homeless, (Australia has 21 million inhabitants) with just over 105 thousand people sleeping rough, or in boarding houses, caravans or shelters for the homeless.

To raise awareness of homelessness, the Managing Director of "Tactical Solutions", Bernard Fehon, organized a gala dinner to raise funds for the local "Vinnies" (St.Vincent de Paul Society). Inspired by school sleepouts attended by his children, he engaged business leaders to support homeless people, by organizing a sleepout to raise funds, on the 21st June 2006 at the Sydney Olympic Parks.

In 2010 the event went nationwide and attracted 700 CEO's in the 7 main cities of Australia, raising 2,9 million dollars. In 2012 over 1000 business leaders participated, raising over $5,3 million.
This year the CEO sleepout event takes place on Thursday the 20th June, around the whole country, with 1112 CEO's already enrolled and donations of $2,750 million made to date.

Over the last 6 years this annual event has raised over $13million dollars nationwide.

In 2012, the CEO sleepout was held for the third time at the WACA (Western Australia Cricket Association grounds). With a temperature of 9 degrees Centigrades, 108 participants were given a humble meal of soup and bread, a cup of tea and a cardboard to sleep under. They raised $822,704 that year.
WA's richest man, Andrew Forrest, Governor-elect and lawyer, Malcolm McCusker, and
WA opposition leader, Eric Ripper were among those who slept in a sleeping bag under a cardboard.
During the night the participants were bombarded with a soundtrack with street noises, sirens, etc to make sure the CEO's slept rough just like people who sleep on the streets, to illustrate how tough life is for the 2000 homeless people of Perth.

Every year more and more leaders are participating and more money is being raised.

The largest cause of homelessness in Australia is domestic and family violence, mainly affecting women and children. Other causes are, unemployment, lack of affordable housing, drug and alcohol abuse, gambling, relationship breakdowns.

If you would like to support the CEO sleepout, donations can be made online to this cause.

Even if just for one night, sleeping rough cannot be easy for these high power men and women, and I don't know if I would have the courage to participate in this event. But after reading about the great services that "Vinnies" provides to the homeless, I will certainly donate to this event. Let's hope that sometime in the next few years homelessness can be eradicated.

What do you think about this sort of event? Is something similar organized in your country?

This public holiday commemorates the death of Luis de Camões on the 10th June 1580.
Camões was a poet that wrote "Os Lusiadas"  (The Lusiads) - an epic poem that celebrates Portuguese history and achievements of the 16th century.

Here in Perth, it was celebrated in both Portuguese clubs on the 8th June - The WA Portuguese Club in Hamilton Hill, near Fremantle and the Portuguese Social Club, which has no club facilities or headquarters but hires a couple of halls for it's functions throughout the year, usually in the Northern Suburbs.
There are around 8000 Portuguese in Perth, and the first club caters more to the older generation that came from the Island of Madeira and from Portugal, while the Social club has a younger membership, that lived mostly in the Portuguese African colonies or South Africa.

Last night's dinner/dance was attended by about 200 people, and the food cooked and served by volunteers was quite delicious. We had Caldo Verde (Kale soup) with chourizo, then Grilled chicken legs, Baked potatoes, Slices of meat and salads.
The dessert tables were covered in wonderful cakes and puddings, baked by some of the ladies that attended the dinner. I baked a Gluten Free Chocolate tart, that was well liked as it was almost finished by the time I collected the plate when we left at midnight.
In both clubs a lot of wonderful volunteers give their time to make sure these events run smoothly and are enjoyed by us all.

Looking forward to the next event in September.

On Sunday, 9th there was another celebration, this time I was to meet up with with a group of young Portuguese who have recently moved to Perth, for a beach barbecue. Sadly the day dawned gray and rainy, and I was later informed that the celebration had moved to the backyard of a couple that lived nearby.
The day was spent barbecuing, eating and talking about our experiences of life in Australia, jobs, visas, kids, marriage, etc. I met some new people, and so the circle of friends grows...


If you are Portuguese living overseas, how did you celebrate Portugal Day?

Today, the 3rd of June was a public holiday in Western Australia - WA Day.
This is held on the first Monday of June, and is only celebrated in WA, commemorating the foundation of the Swan River Colony near Perth, in 1829.
Throughout the weekend from Saturday to Monday, there were plenty of other activities from horse-racing, to the Western Australian of the Year Awards, music concerts... 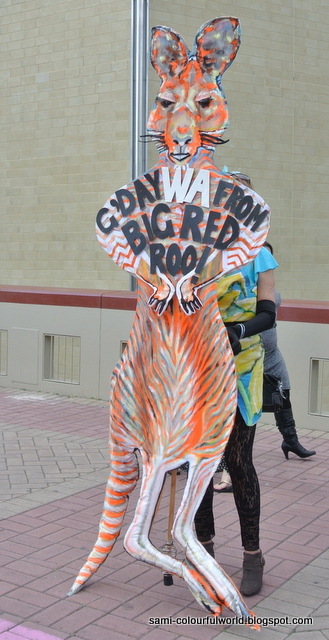 It was originally called Foundation Day, but the name was changed last year, as a recognition of the Aboriginal people as the original owners of this land.

I thought I would go into the city just for a change of scenery, to have a look at the shops...but as I stepped off the train station I came across a vibrant and noisy city centre.

Forrest Place, a pedestrian only square located in the CBD, was awash with kids and adults, engaged in various fun activities and enjoying a beautiful and sunny winter day with a balmy temperature of 20.C.
Merry-go rounds, bouncy castle, climbing wall, face painting, animal zoo, balloon artists, water fountain....the kids were ecstatic!
There were also some tents sponsored by one of our supermarkets, giving out hot dogs and cold drinks, and this was the spot with the longest queues around lunchtime!


The Art Museum and the Western Australian Museum were opened to the public for free, and I took the opportunity to visit both.

Outside the Art Museum people could get some tips from an Aboriginal artist on how to paint a huge canvas with the traditional dots.