I hope you had a Good Easter and hopefully you were lucky enough to enjoy a mini holiday.

I have just returned from a short Easter break in Adelaide, South Australia and while walking around in Glenelg, a seaside suburb 10km from the city centre, I was excited to came across this mural by Adelaide born street artist "Vans the Omega", one of the artists that recently participated in the Form street art in Perth. 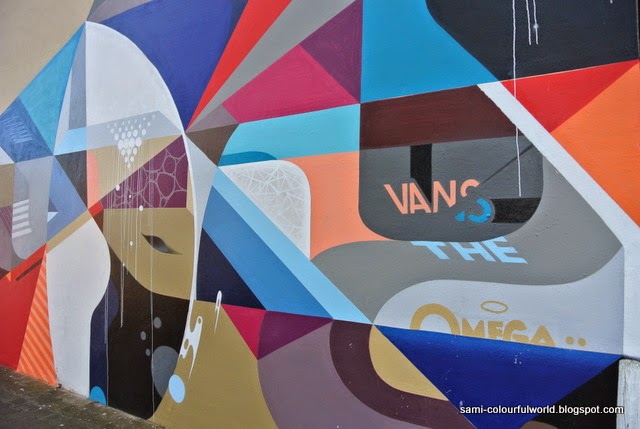 A few other murals I saw in Glenelg lanes. 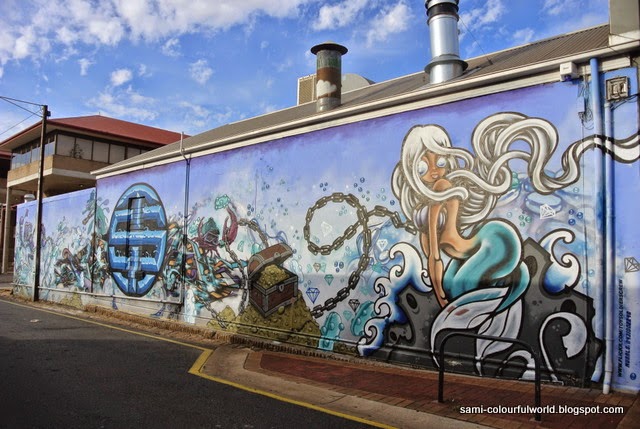 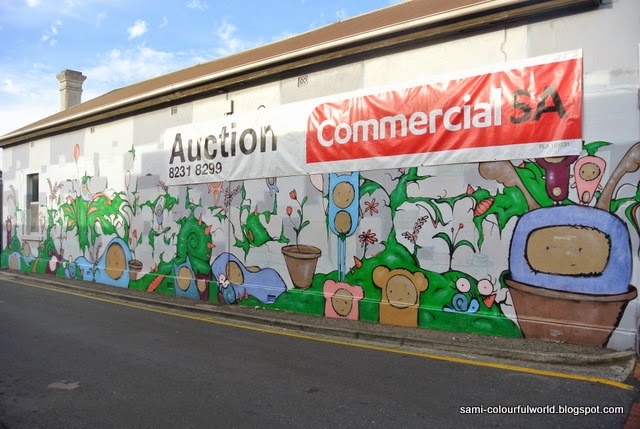 In the next posts I will bring you some more highlights from my visit to Adelaide>
Enjoy your week.

After the visit to Wolf Lane (see previous post) I went to see the pictures hanging in the Form gallery in Murray St, painted by some of the artists participating in the Street Art. 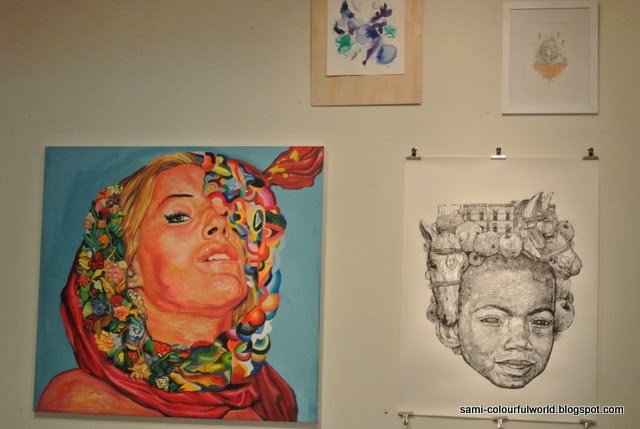 Back on the street and another little side lane - Prince Lane - and more murals adorn the old brick warehouses. 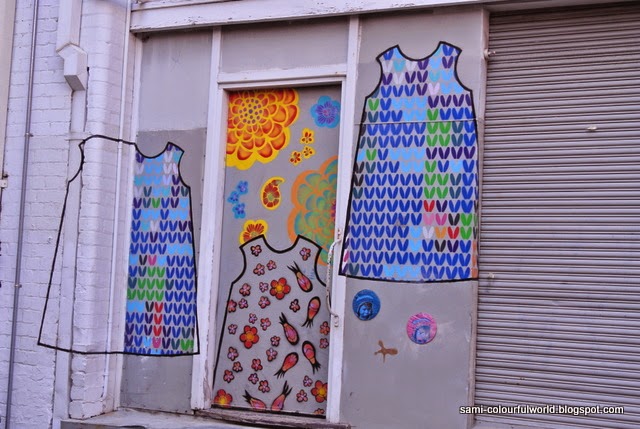 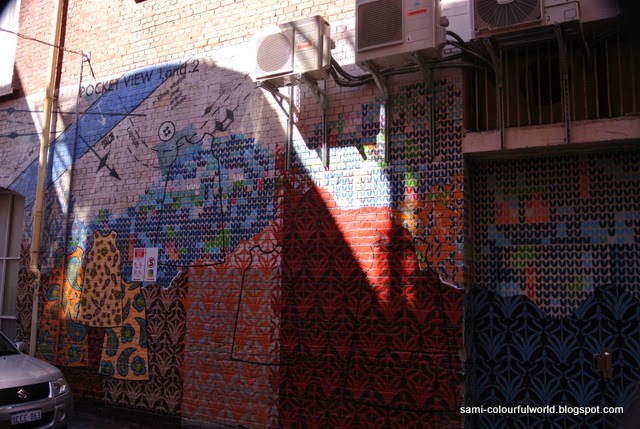 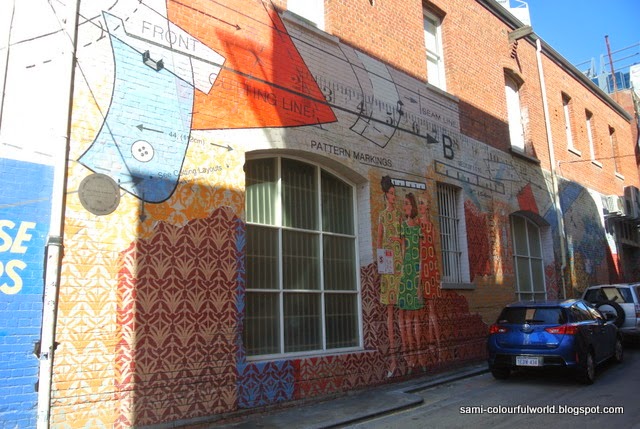 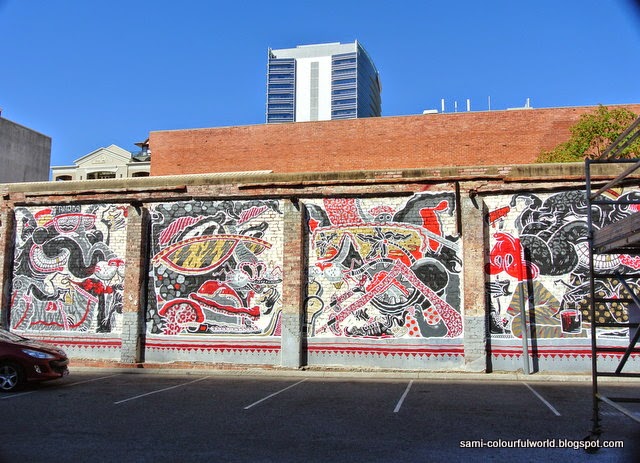 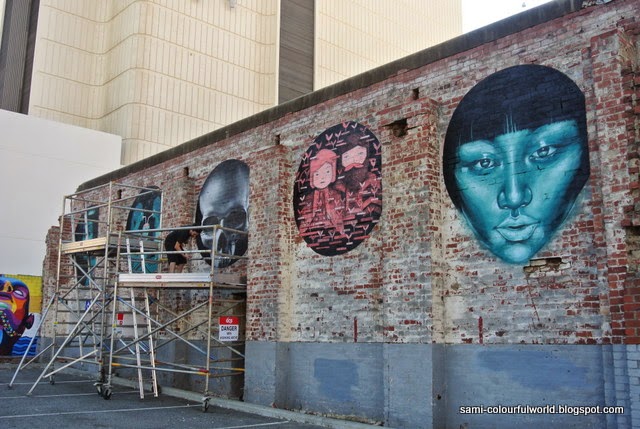 And now we come to the main show pieces of this exhibition - at the end of the car park, behind a wire fence is this 6 storey high building with the main entrance in Wellington St.
The works of Roa (Belgium) and Phlegm (UK) covered the side walls. Roa was still busy finishing his masterpiece when I photographed it on Sunday (13 April). 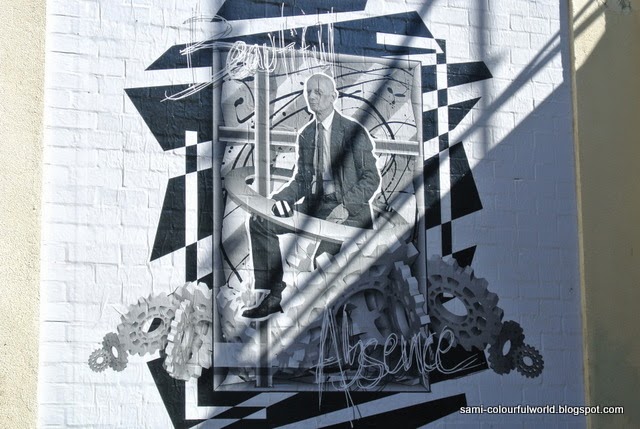 Some of these artists probably started out as graffiti artists in their youth, defacing
walls and trains, what most of us consider to be vandalism but they have now turned their lives around and now exhibit their work in walls all over the world.

Apparently it has been shown that this type of wall art deters graffiti tagging and protects property.

Hope you enjoyed the tour of the first street art project in Perth.
Posted by Sami at 22:18 8 comments:

Today (Sunday) I went into the city to check out the FORM Public art festival, which started on the 5th April and runs until today.
This is the first time this type of street art festival is held in Perth, and it included talks, music shows and food tents.

These murals will hopefully last for a while making our city more vibrant and energetic!

As I came up the escalators of the Perth Underground Station onto Murray Street I was greeted by a male chorus - Vocal Evolution. I stayed for a while listening to their melodic songs. Wonderful stuff, makes you feel good! 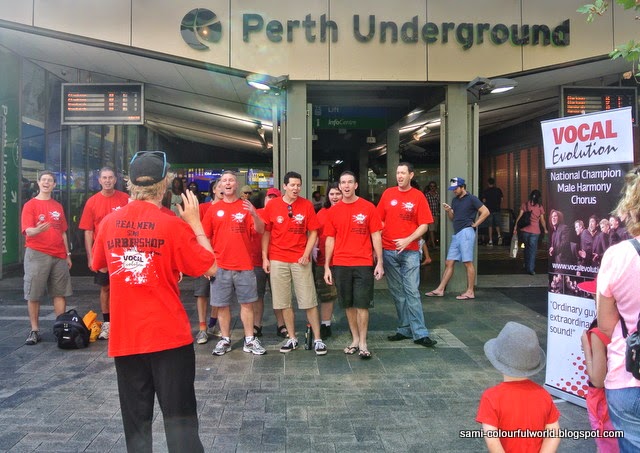 Around the corner in Forrest Chase Square a Butcher's competition was being held, with free meat tasting (cooked, not raw).

Well, it was time to walk around and see the Street Art!
Around the corner from the Underground train Station in William Street, I spotted some artworks in Globe Lane, that links to Forrest Chase behind the station (these two weren't part of the FORM project though, they have been here a few months already). 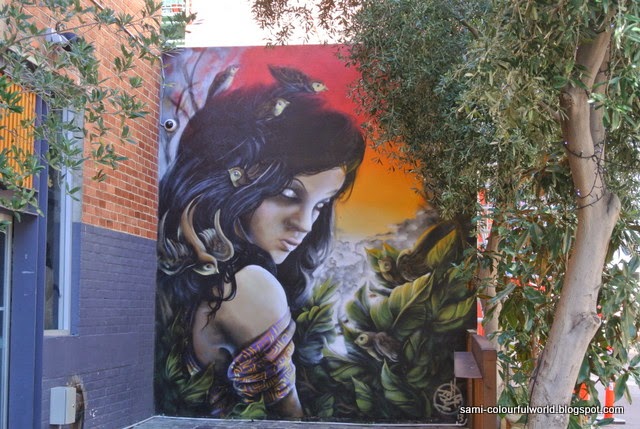 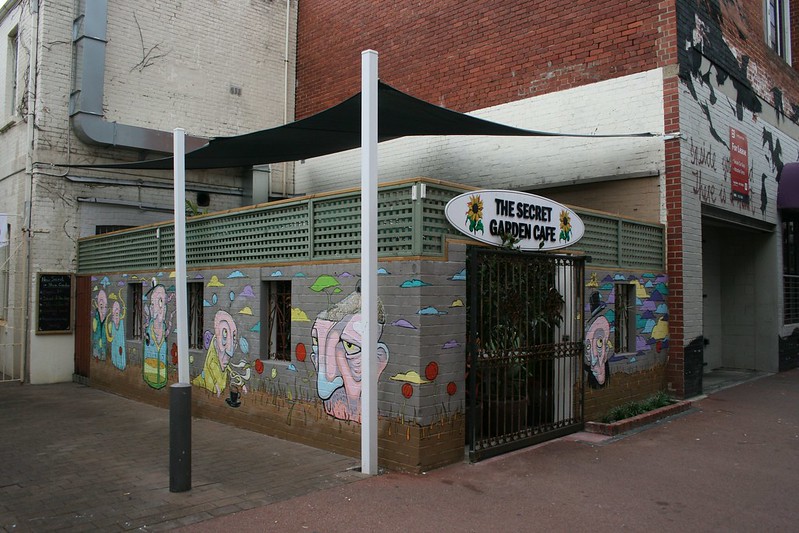 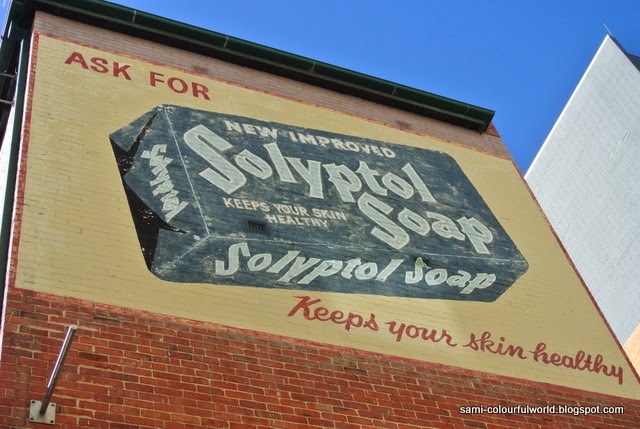 In the next post there will be more photos from this street art exhibition.
I have read that street art, although a form of "graffiti" actually protects the walls from vandalism from "ugly graffiti".

Hope you had a wonderful Sunday! Once again we had a beautiful day with a high of 33C, a wonderful Autumn day! The forecast for the rest of the week is in the high 20's, reaching 31C again next Friday.

This "Wolf" on the corner of Wolf Lane Bar, was actually painted by Perth artist Hurben in July 2012. 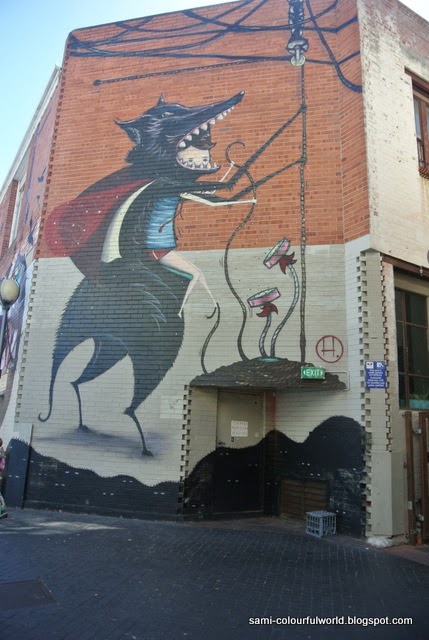 Continuing our tour of the Sculptures at Cottesloe Beach, here are a few more photos, of some of the sculptures that I enjoyed seeing.

This next one called "Wave 1", by a WA artist, Annette Thas,  looked a bit like a soccer goal covered in thousands of Barbie dolls!    Yes, dolls,  I had to get up close to figure out what it was! A bit creepy I suppose but it won the People's Choice Prize of $2500, so it was a popular one. It also won the Kid's choice prize of course! 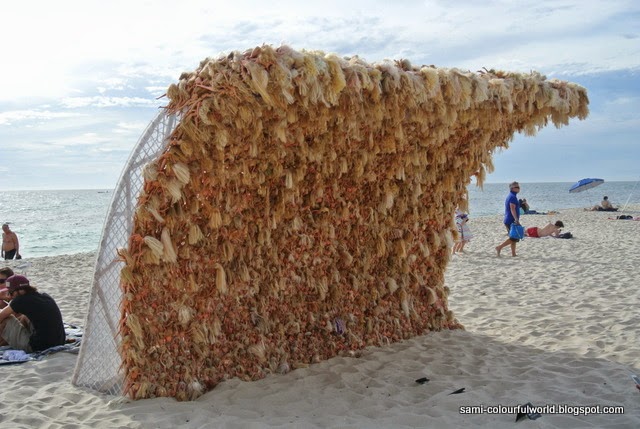 Another very popular exhibit and one of my favourites, was "Permanent Sunset" by Argentinian artist, Alejandro Propato. Made with yellow, orange and red nylon wire strung onto pipes, it was dedicated to the beautiful sunsets at Cottesloe Beach. 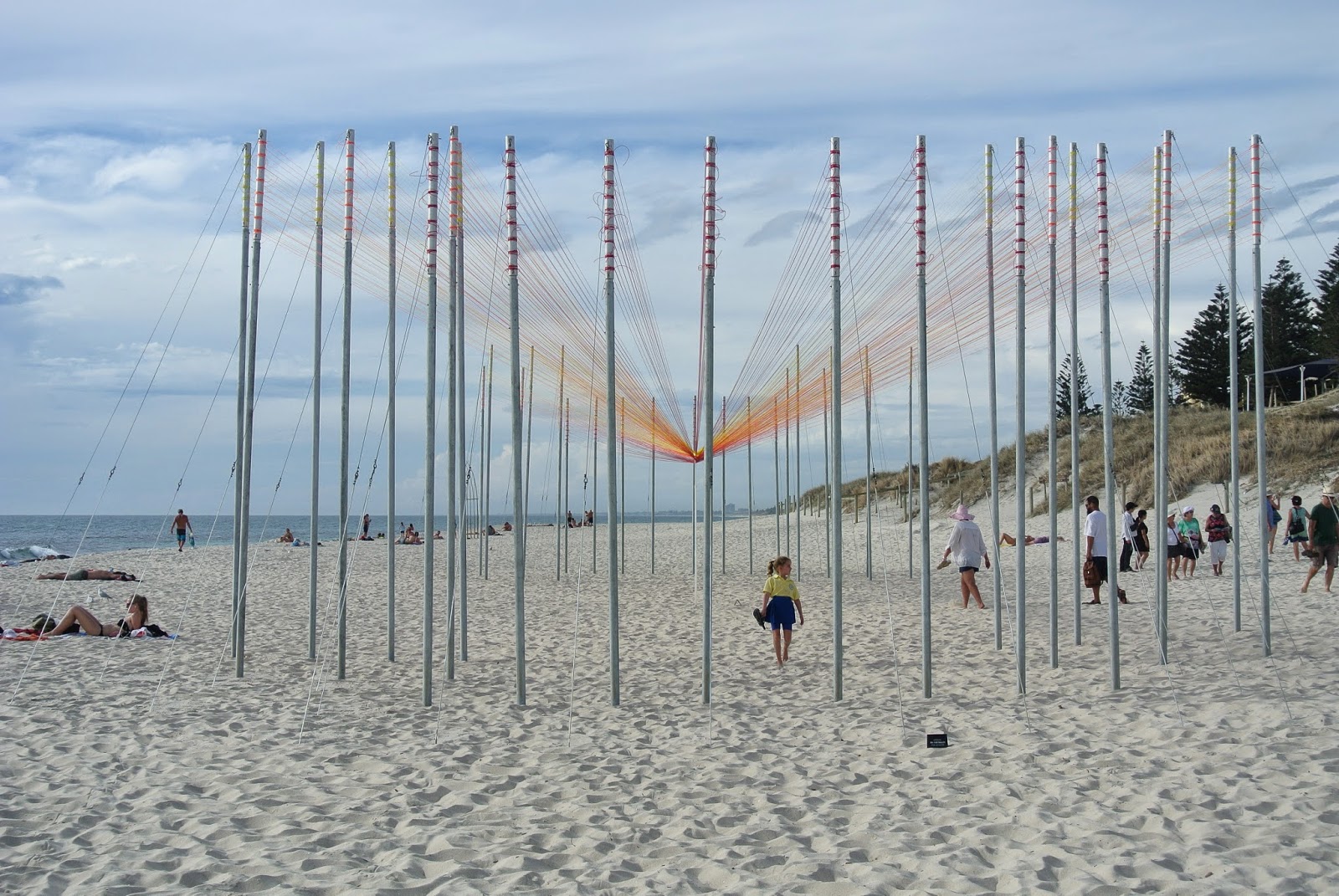 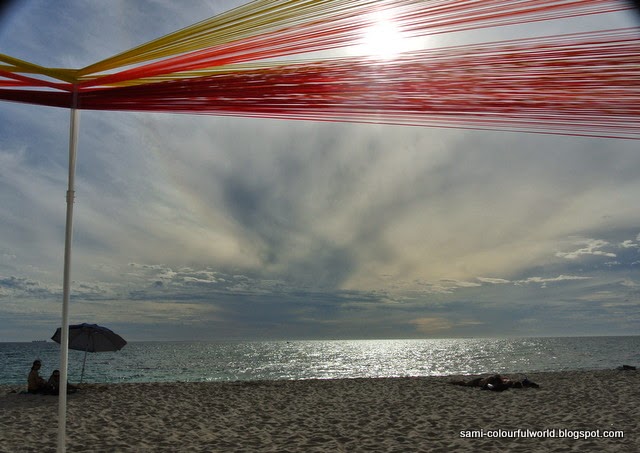 This was another of my favourites - also by a WA artist - Helen Seiver, called "Rescheduling Permanence" it was built out of wooden sticks and crocheted plastic bags, representing the impact of plastic bags on our oceans.
I had seen plastic bags being re-used but not this artistically, the flowers looked quite beautiful actually!
Maybe an idea for a kid's cubby house in the garden? What do you think?

"Fetch" - a few mirrored dogs, by Melbourne duo The Winged Collective, was cute,
I just thought that they were almost invisible in the sand, they might have been more visually attractive if they were on the grass, where the reflection could be seen.

Another  exhibit by a WA artist, Stella Onderwater - "Shelter 2" was made up of towels with names of famous Australian beaches. 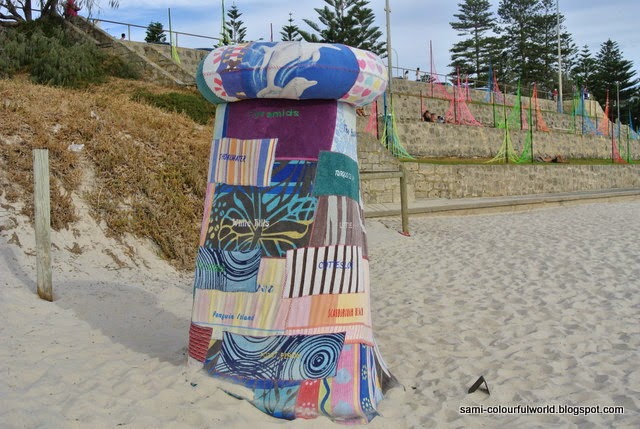 Hope you enjoyed the sculpture show and I leave you with some shots of Cottesloe beach with lots of sculptures scattered all over the sand and grass. 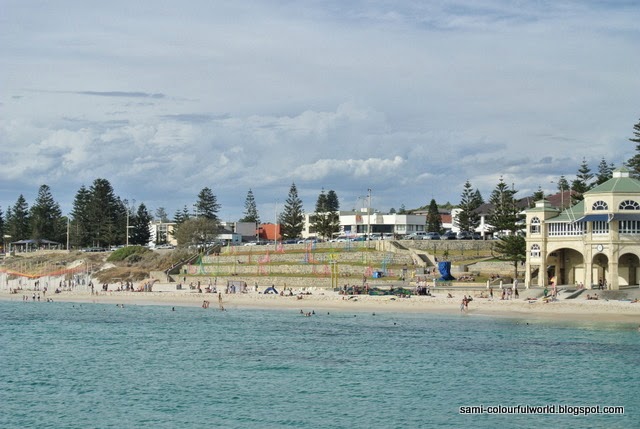