On Saturday I pick up my husband from the airport. He is coming home after having worked and lived in Adelaide (South Australia) on a project for the last 3 years.
We had 3 years of weekends together, other short visits from me to Adelaide or from him to Perth, many many frequent flyer points earned, but a lot of loneliness too of course!
Hopefully he will now be based in Perth again for his next project.

But tomorrow (Thursday 31st) I say good-bye for a short while to my son and daughter in law, as they depart on a 3 week visit to Portugal to visit family on both sides. It will be the first time my family meets Sara, the new member of the family.
May they have a safe flight!

These photos were taken on one of my many visits to the airport to pick up my husband, while I wait for his call to say he has landed...
They have a viewing platform and very handy parking lot, a 5 min. drive to both the domestic and international airport terminals.

There's always lots of keen plane spotters with their long lenses photographing every plane that lands or takes off and some of them even taking notes of the details of every plane. 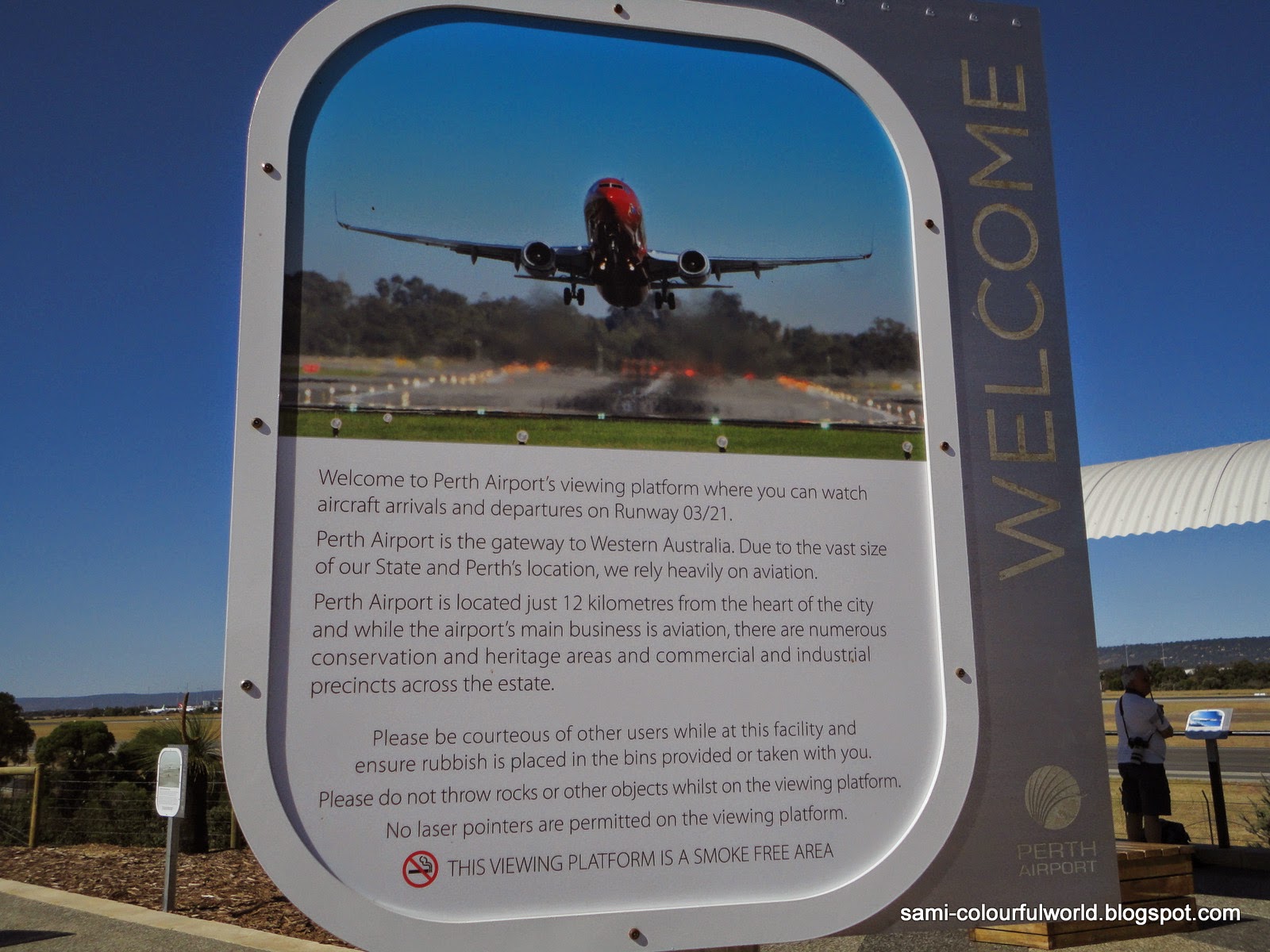 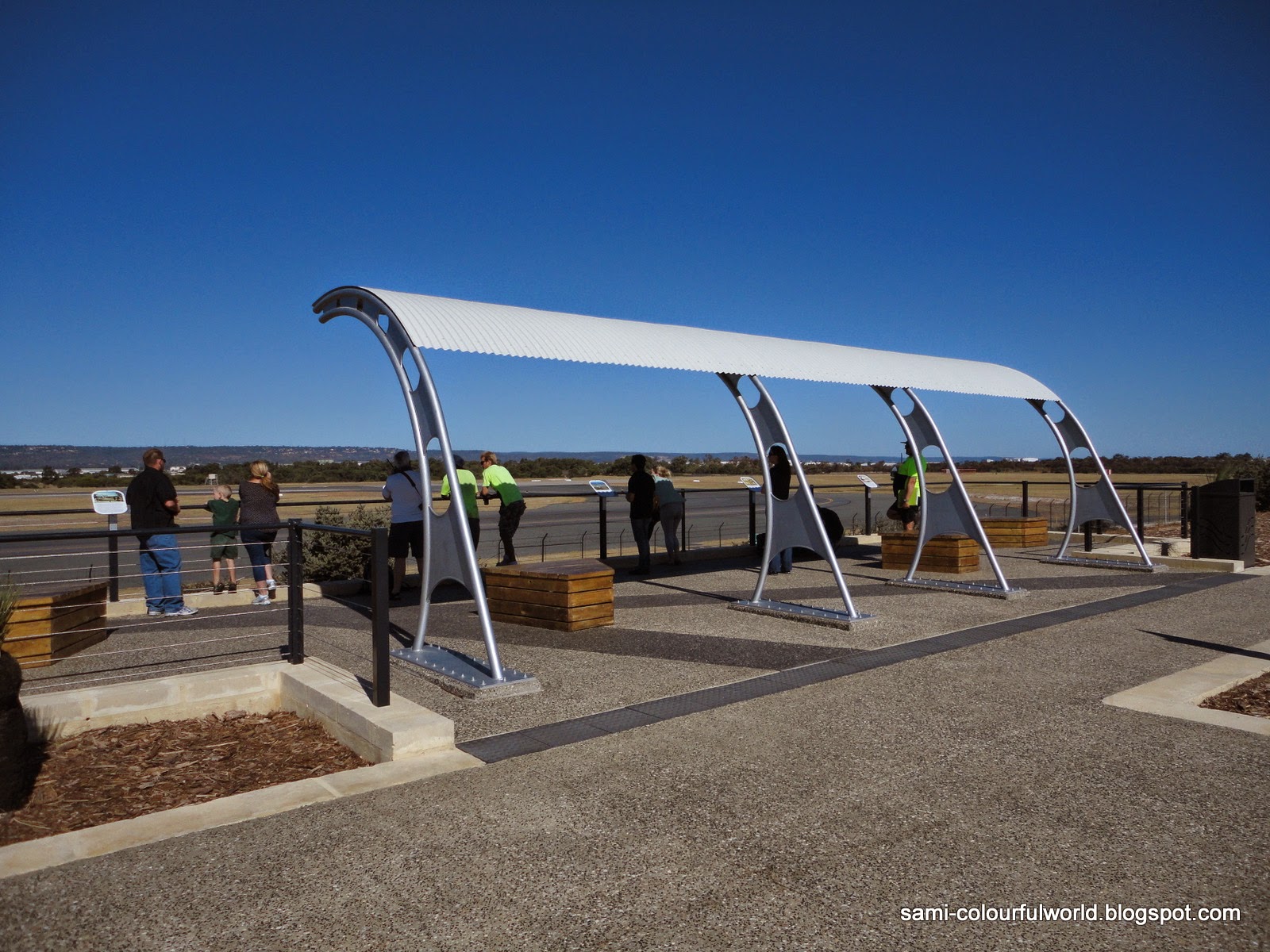 The world would be a better place if... / O mundo seria um lugar melhor se...

At Sandra's invitation, here is my participation in this challenge.
- The world would be a better place if...
Humans were kinder and more respectful of other people and animals.
- A friendship is really important when....
You can maintain it despite living in different countries.
- Patience and tolerance for me is ...
Accepting that we are all different and respecting that. Luckily I'm patient and I try hard to be tolerant too.
- Something that irritates me profoundly...
People that have no manners or that don't respect the older generation.
- I think that humble people are ...
An example to be followed!
- When the day dawns cloudy, I ...
Love to cuddle up with a good book or watch my favourite TV series.
An essential quality in people is ...           Respectfulness.

Tonight I invited my son and daughter in law to go into the city for dinner, and to go and watch the Winter Lights Festival in St George's Terrace. The festival started on the 11th July and runs until 27th July from 6pm until midnight. 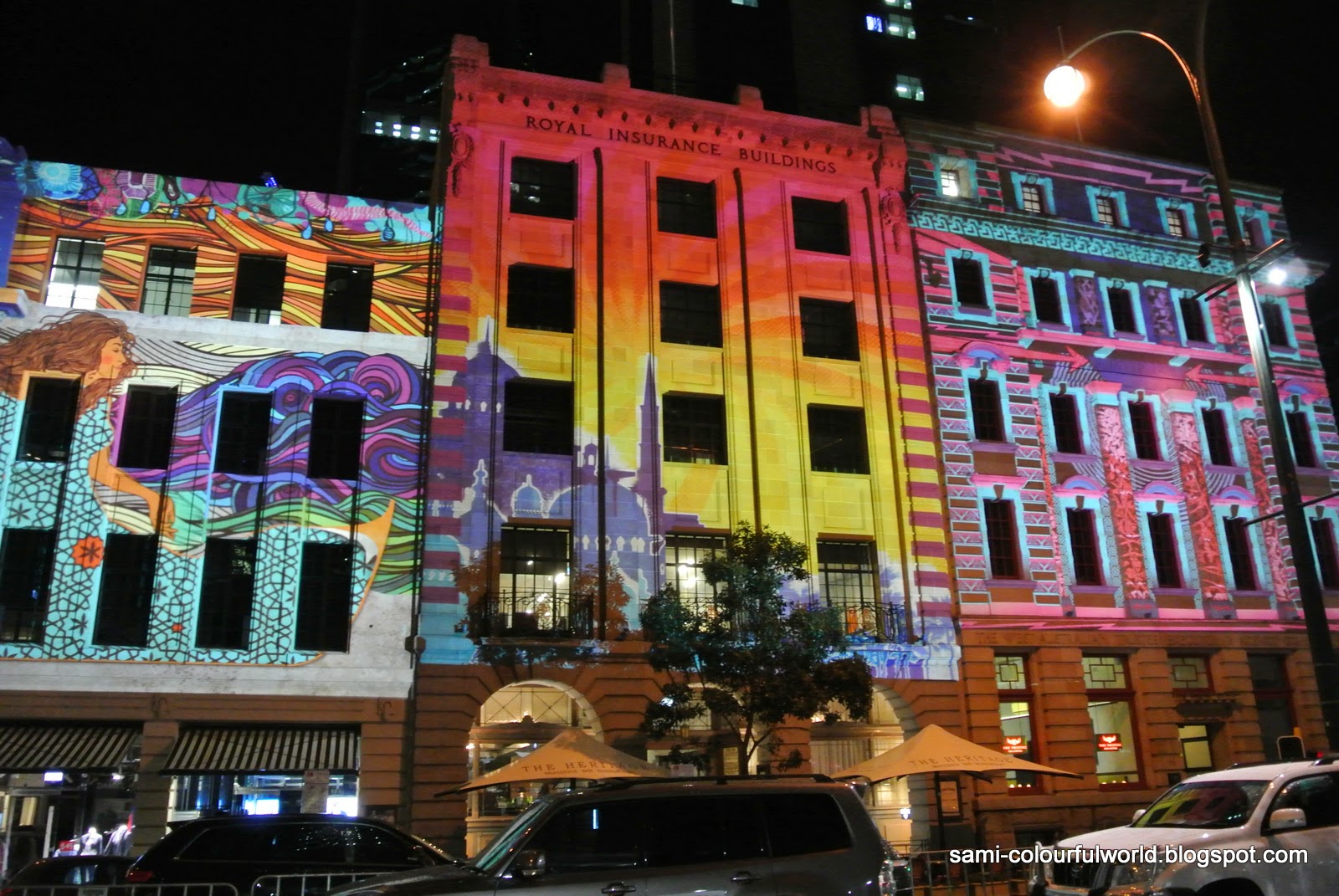 I was surprised to see so many people enjoying the balmy winter evening of 16C , having dinner in restaurants and even in esplanades warmed up by gas heaters.

I still remember not many years ago when the city would be dead when the offices and shops closed for the evening, now even though it's the middle of winter, the city was vibrant.

We left our cars at the train station and took a 10min. ride into the city. Dinner was at a Japanese restaurant in Shafto Lane. It was reasonably priced and quite tasty. Then a short walk to St.George's Terrace to watch the lights, with the display changing every couple of minutes over these beautiful heritage buildings.

These buildings have been restored part of the "City Square development" which was completed in 2012 and renamed "Brookfield Place". 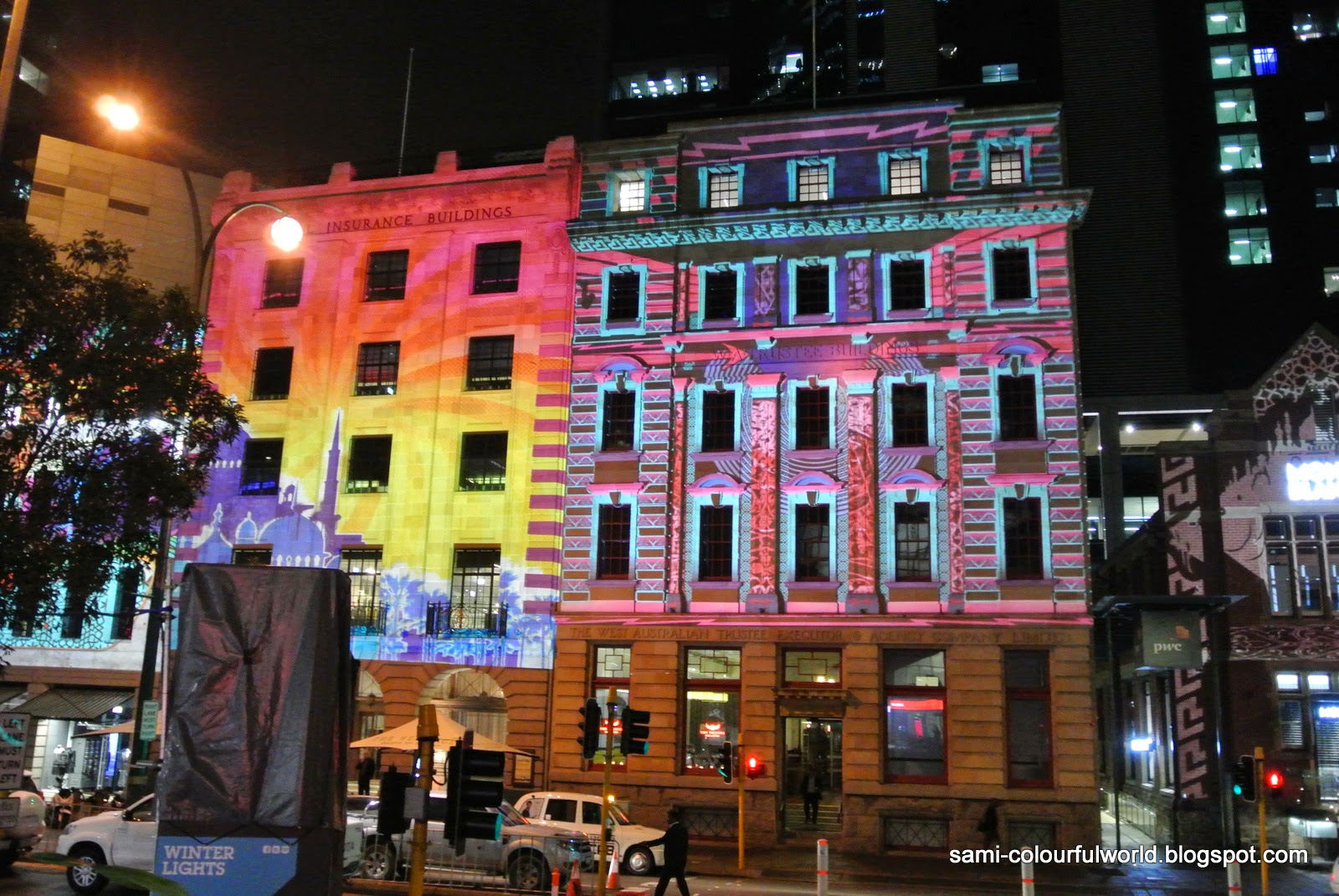 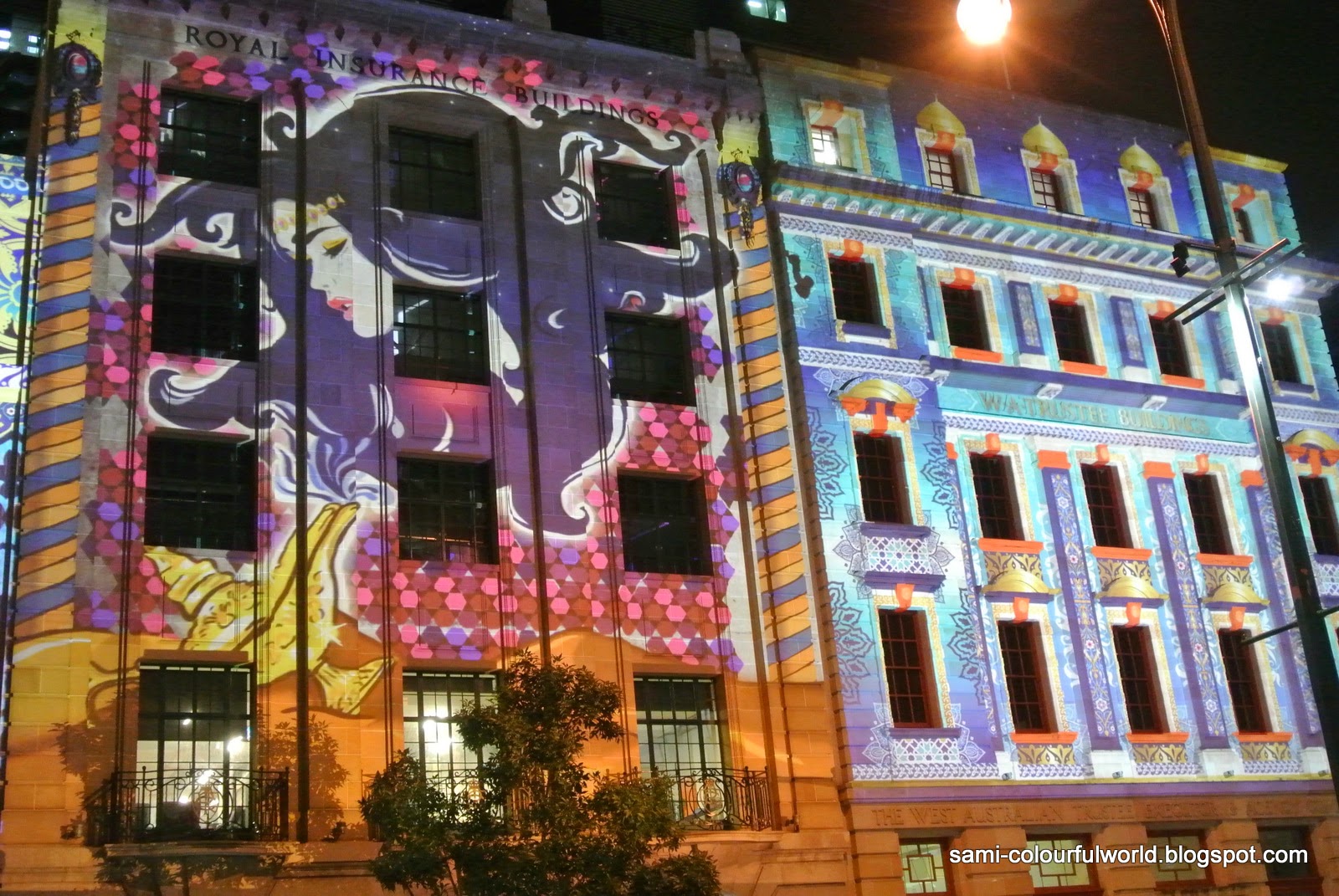 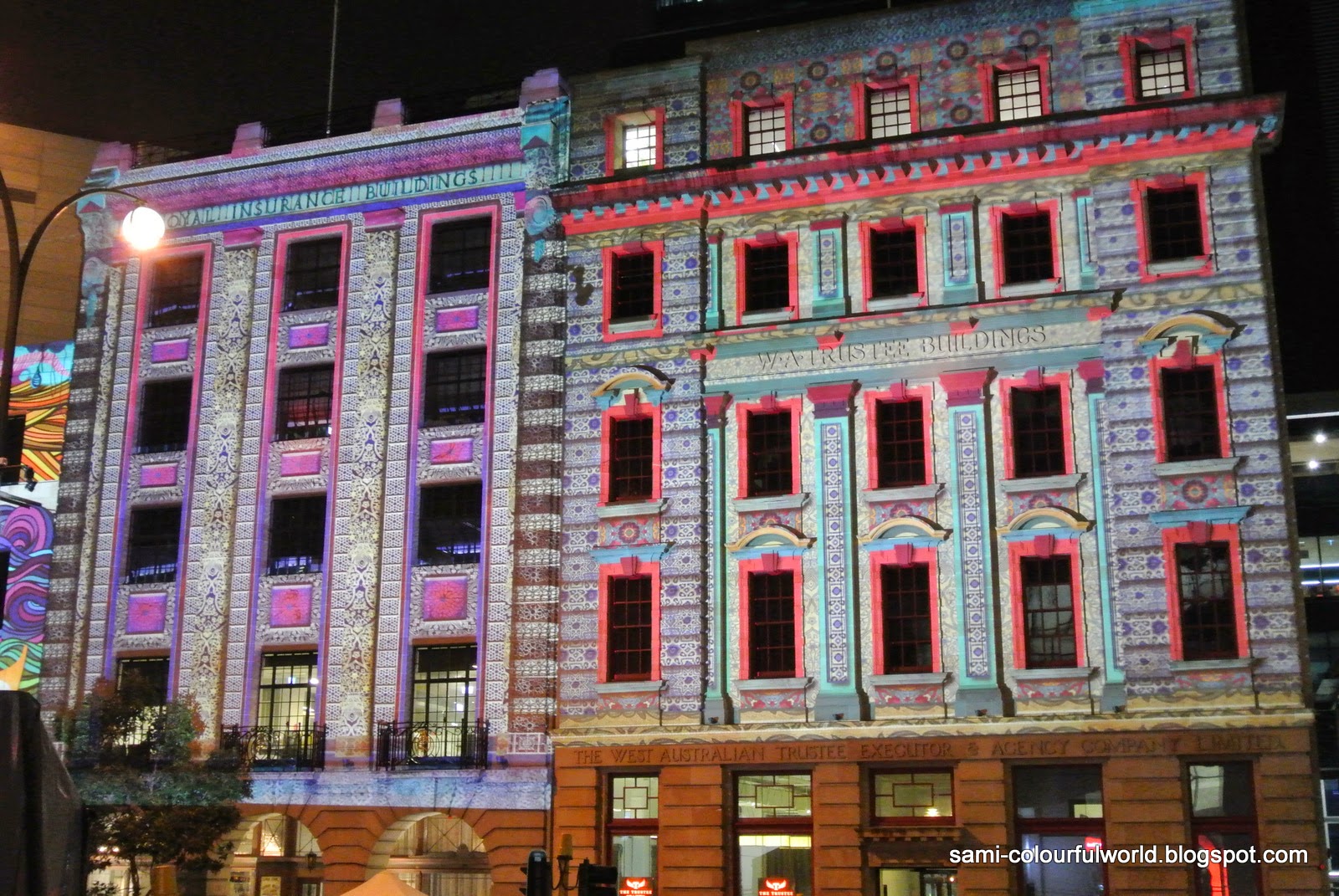 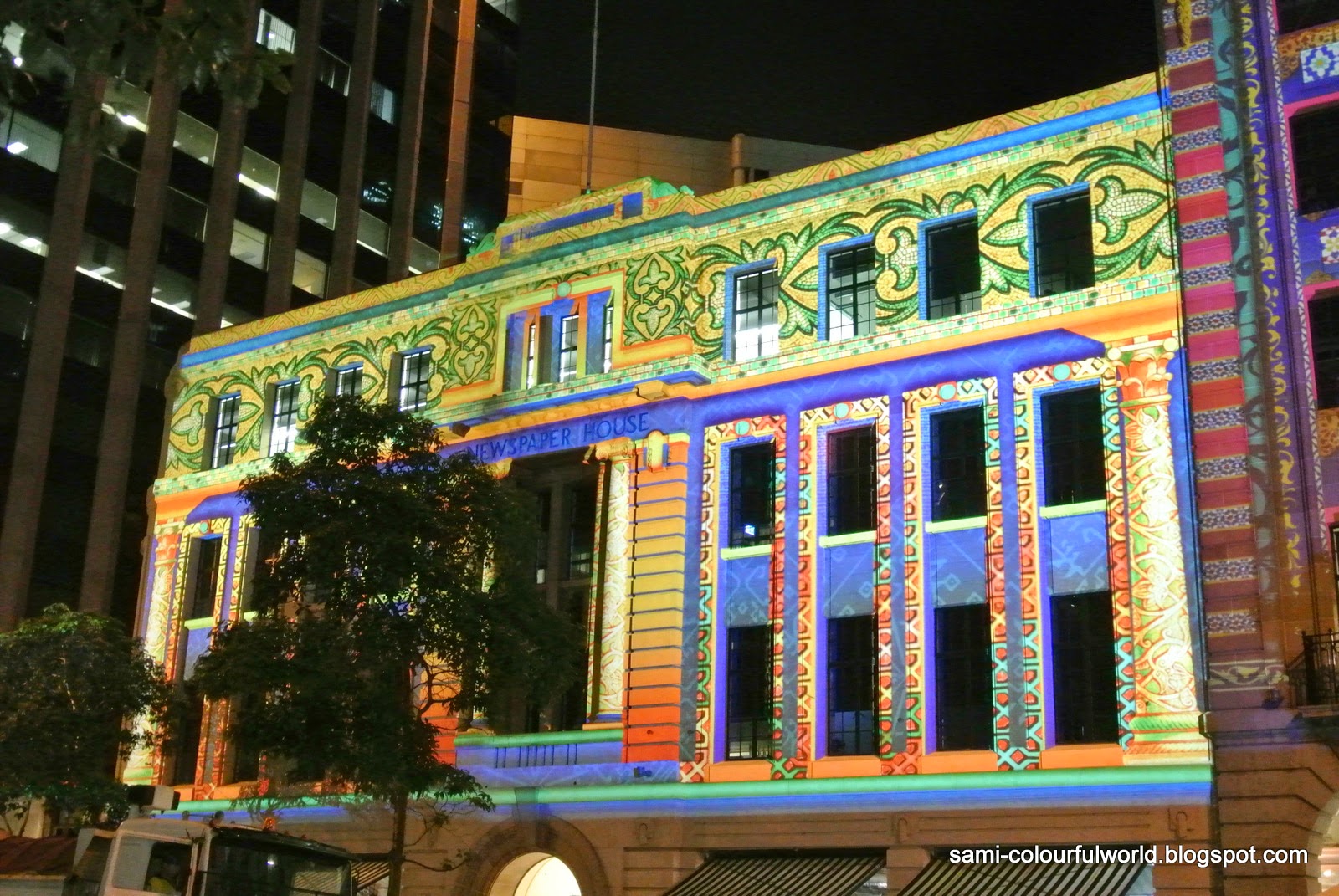 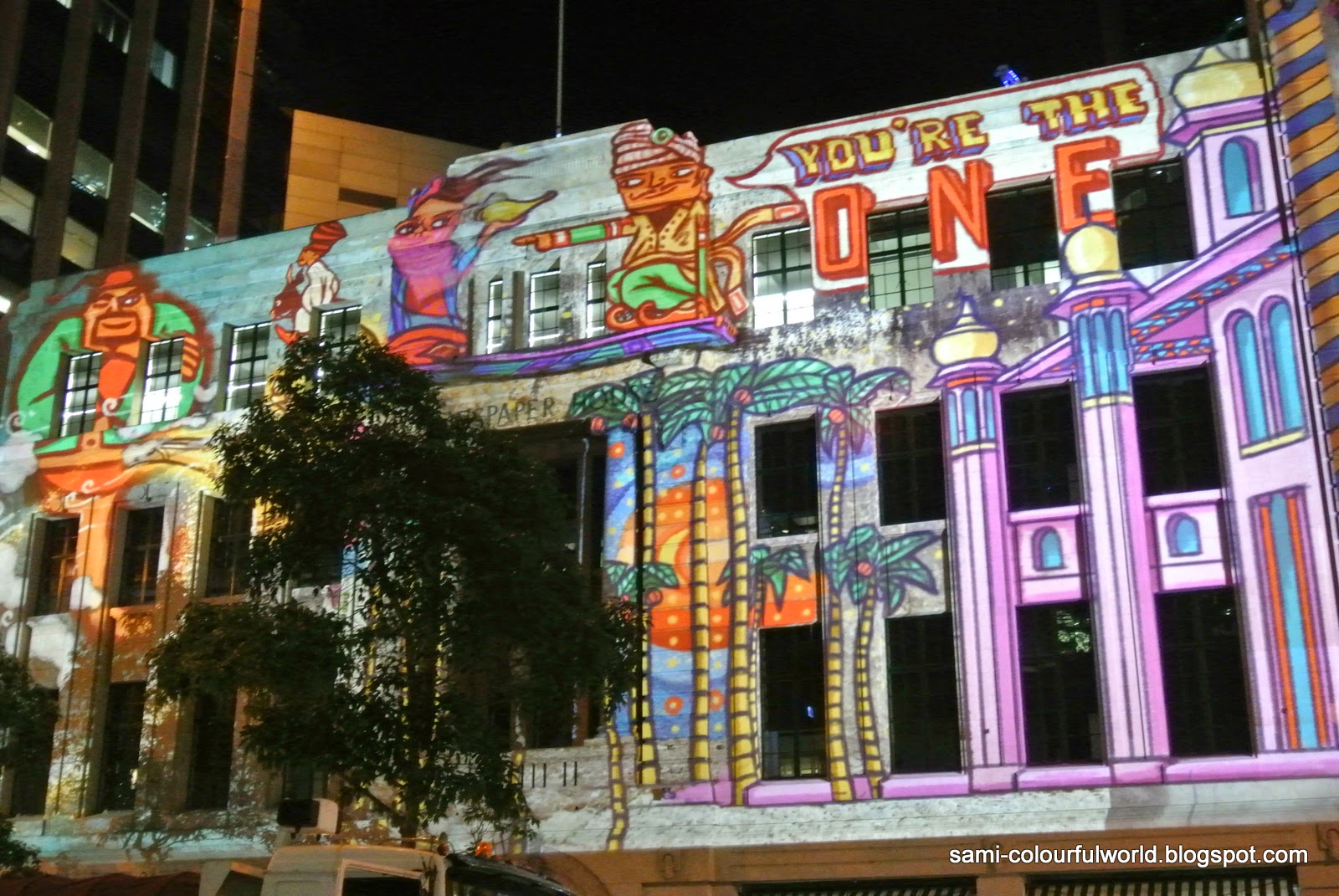 Newspaper House above, was the former office of the "West Australian Newspaper" for over 50 years until mid-1980's. Nowadays, the building has been refurbished and houses a few restaurants. 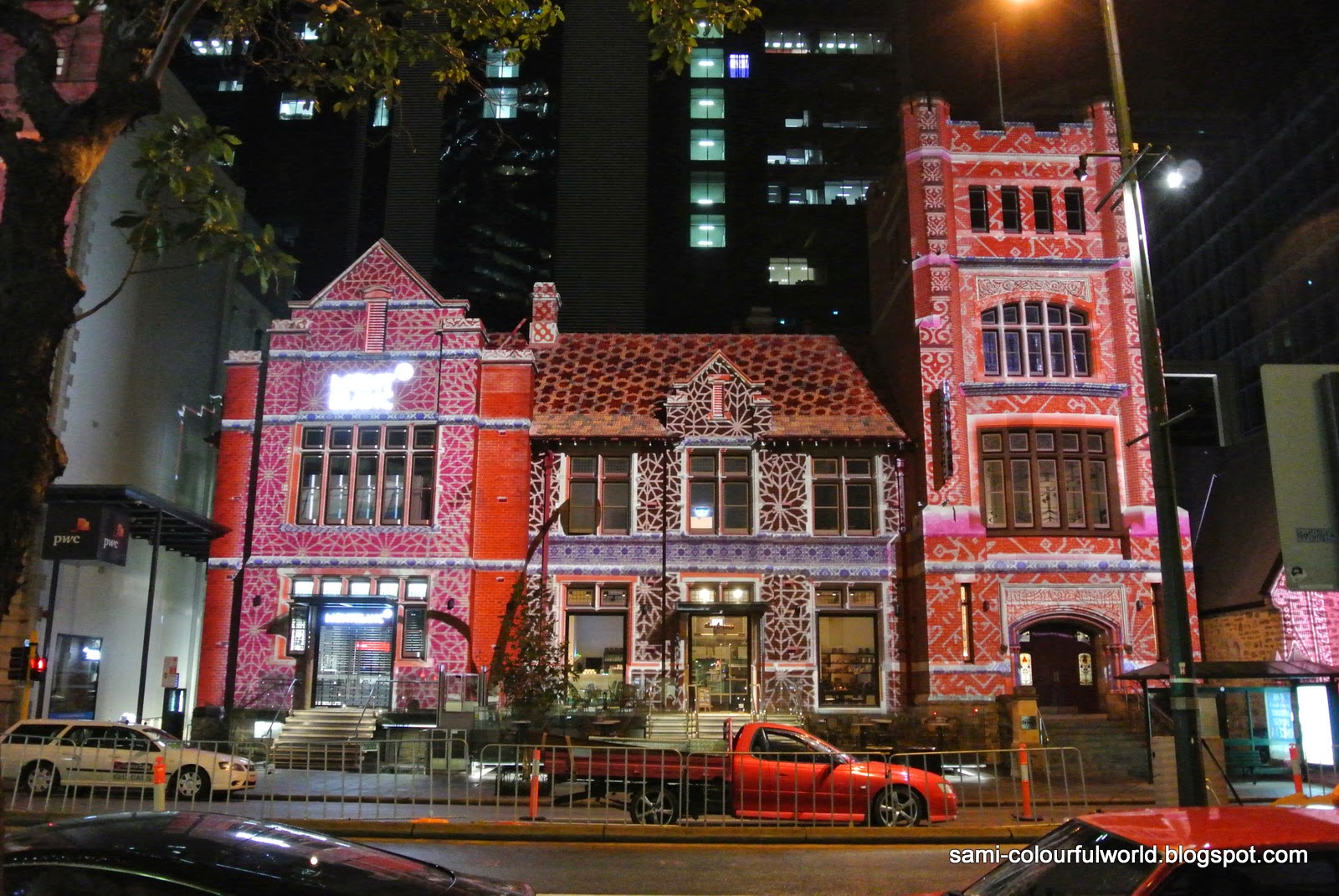 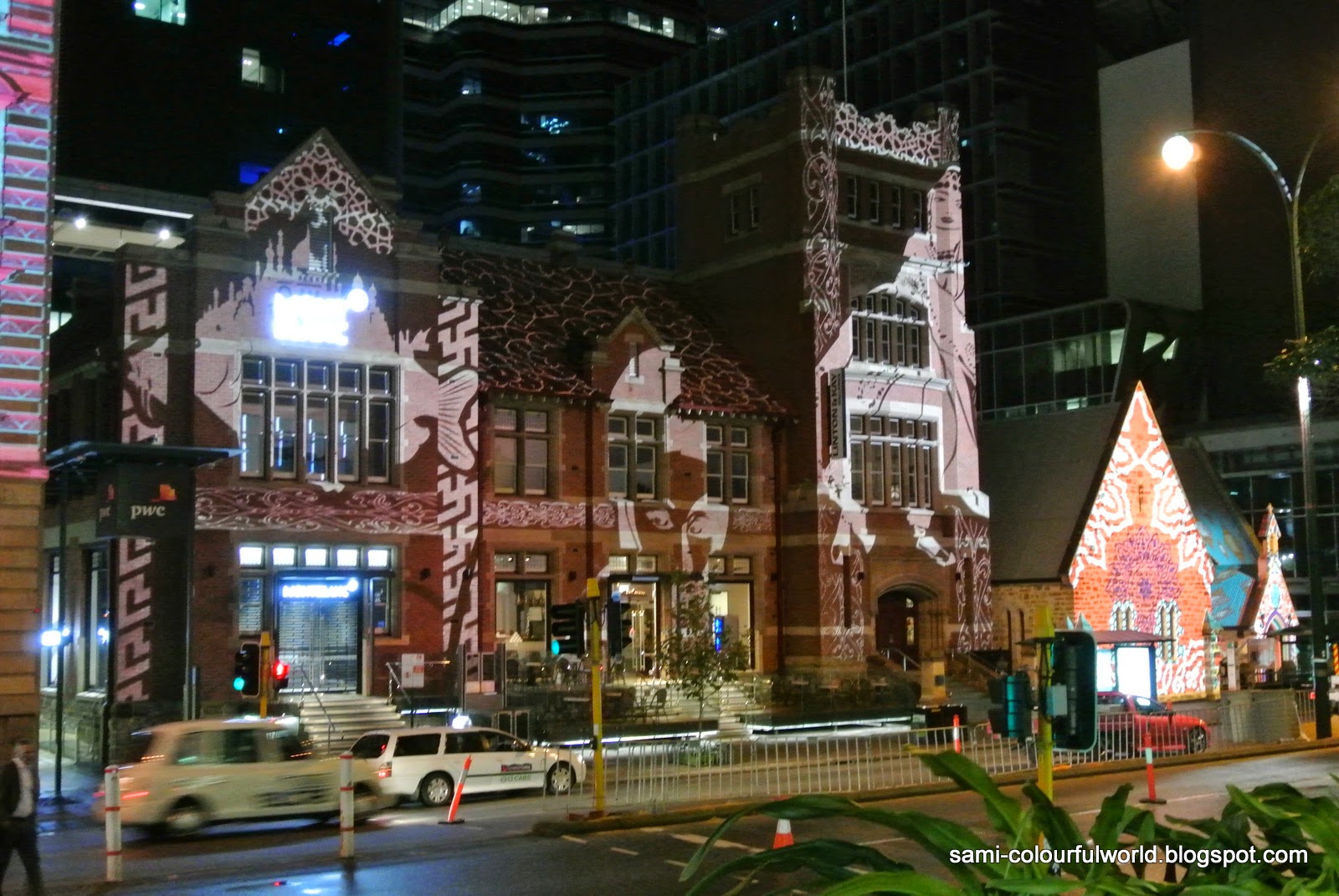 Above, the Old Perth Technical School built in 1910, was refurbished in 2012 and now houses a few commercial premises, among them a wonderful Cafe. 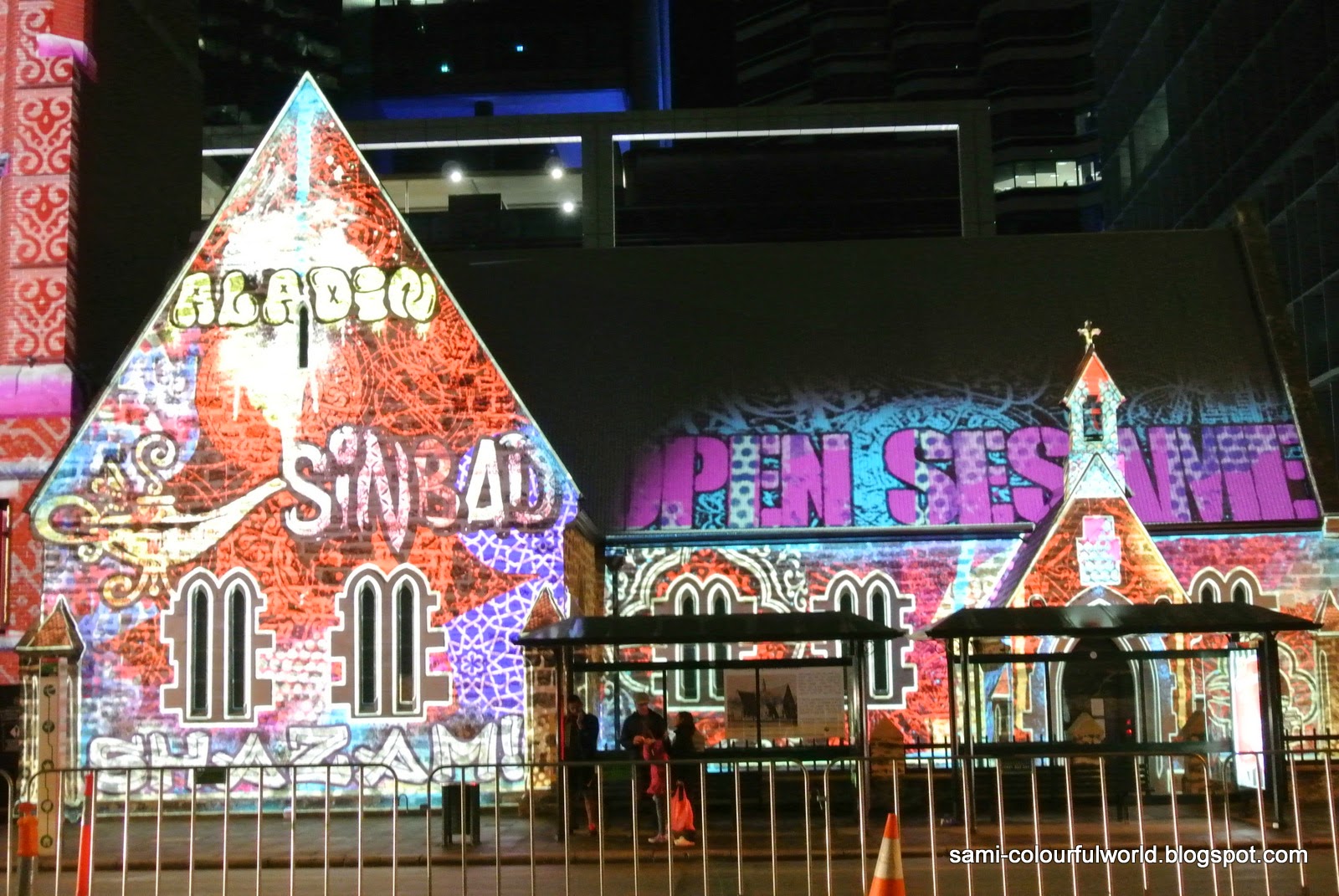 The Old Perth Boys School whose construction was completed in 1854, resembles a church, but originally housed a boy's school.
Nowadays it's owned by the National Trust of WA and is occupied by a Cafe and wine bar.

And then, to end the evening we had to go and check the "Winterland" and experience the true Northern hemisphere winter. The area near near the James Street Amphitheatre, near the State Library and WA Museum, which in summer housed a "sandy beach" (check the post from January), now houses an ice-rink! 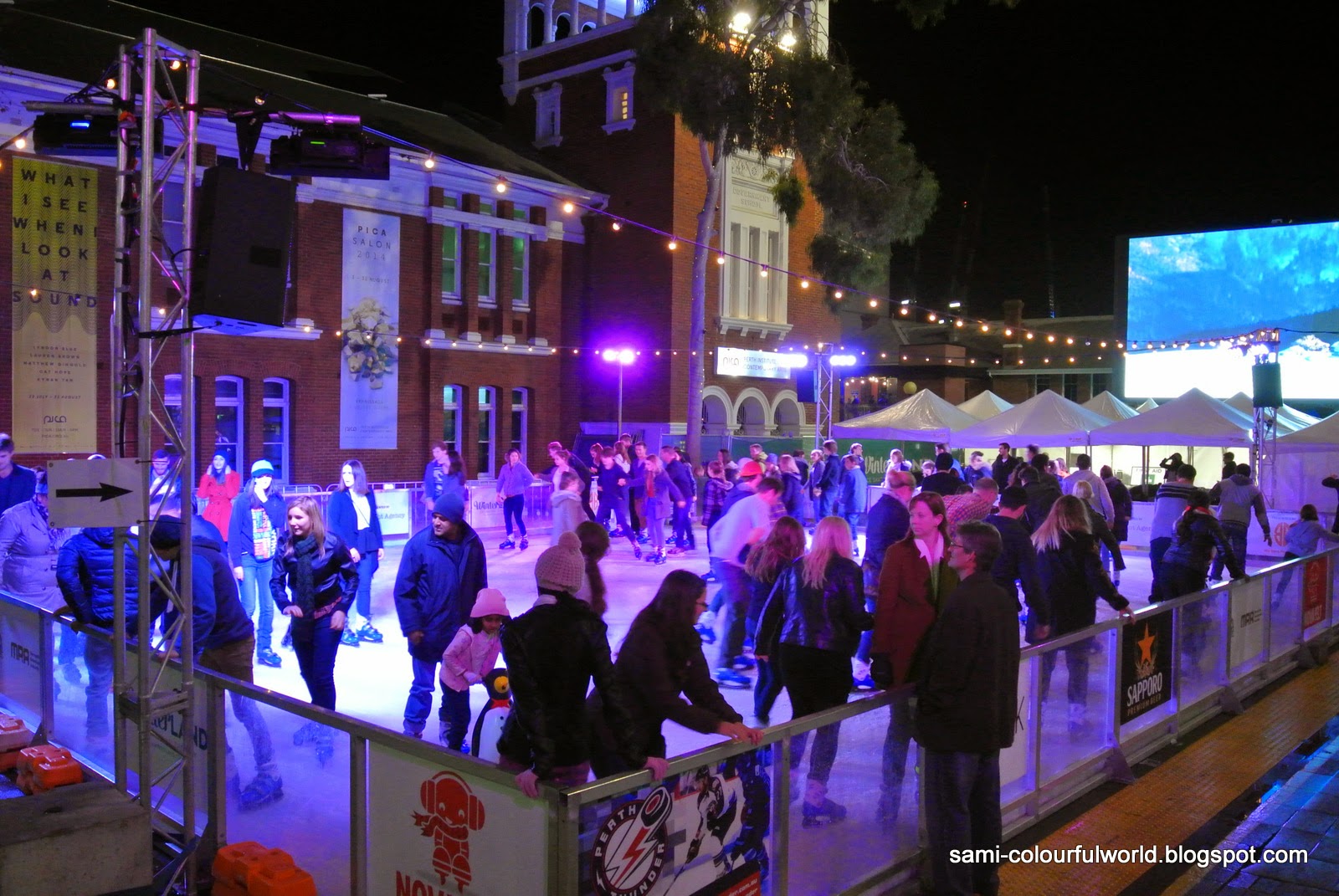 Loads of people were having fun, even though I thought the price per 45min. a bit steep at $24 for adults!
Some kids held onto Penguins ($10 extra) that helped them balance on skates. Cute!
A large screen showed winter images.

At the Lodge Cafe - a tent erected for the winter fair - we had lukewarm hot chocolate and a not so great Caramel slice, while we chatted inside next to a gas heater.
The interior was furnished with a  mish-mash of sofas, chairs and tables, a lot of them with a 70's air which actually gave it a cosy atmosphere.

They sold Mulled Wine (Gluwein), which might have been a better choice, but I didn't want risking drinking wine and then having to drive home from the station.

I can't remember the last time I went out during the week, and this certainly was a wonderful Winter's evening.
It almost felt like Christmas in July!!

A Cemetery with a difference

Pinnaroo Valley Memorial Park in Perth's northern suburb of Padbury, just 20km out of the city centre is certainly a different type of cemetery. 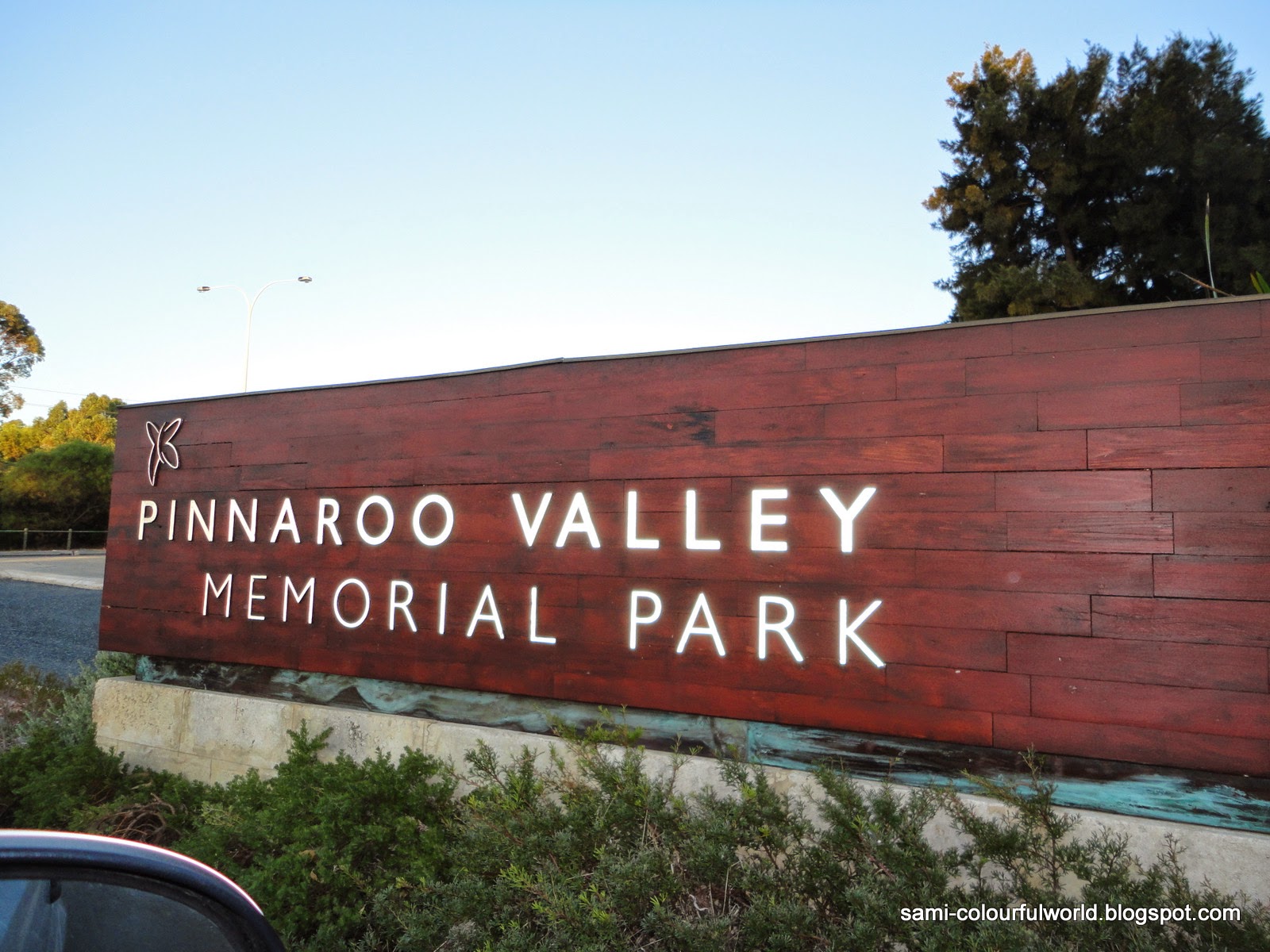 Even though it is located just 500 metres from the Whitfords train station, and just off the Mitchell Highway, once you turn into the huge green grounds, it feels very peaceful.

Pinnaroo had it's first burial in 1978, and I presume by then that area must have been quite remote, but with the growth of Perth there are now loads of new suburbs further north of the cemetery.

It's considered to be Australia's most environmental friendly cemetery, with plenty of bushland surrounding it, and it has been planted exclusively with native species. The park is also a haven for kangaroos and other native animals.

The cemetery has various courtyards named after Australian flora - Acacia court, Melaleuca court, etc., which are used for burials. Ashes can be placed in memorial gardens by planting native trees or bushes - a living memorial to the loved one.

No headstones or monuments are permitted and the graves are marked with flat bronze or natural stone memorial plaques.

There is also a Cafe in the grounds open to the public 7 days a week, and there are 2 limestone and timber chapels where funeral services are performed.
Bereaved families can engage the services of a catering service, very appropriately named "Celeste Catering", and can then gather in the lounges next to the chapels.

The cemetery is very popular with joggers, walkers, picnics, dog walks and even for wedding photographs, reason why I hope you don't find this post a bit creepy.
I thought the cemetery had such a calm and relaxed feeling and was just beautiful!

Below are some "soft" photos of the cemetery with it's beautiful surroundings - lakes, waterfalls, plenty of greenery and of course the wonderful wild kangaroos.

Hope you enjoy the views. 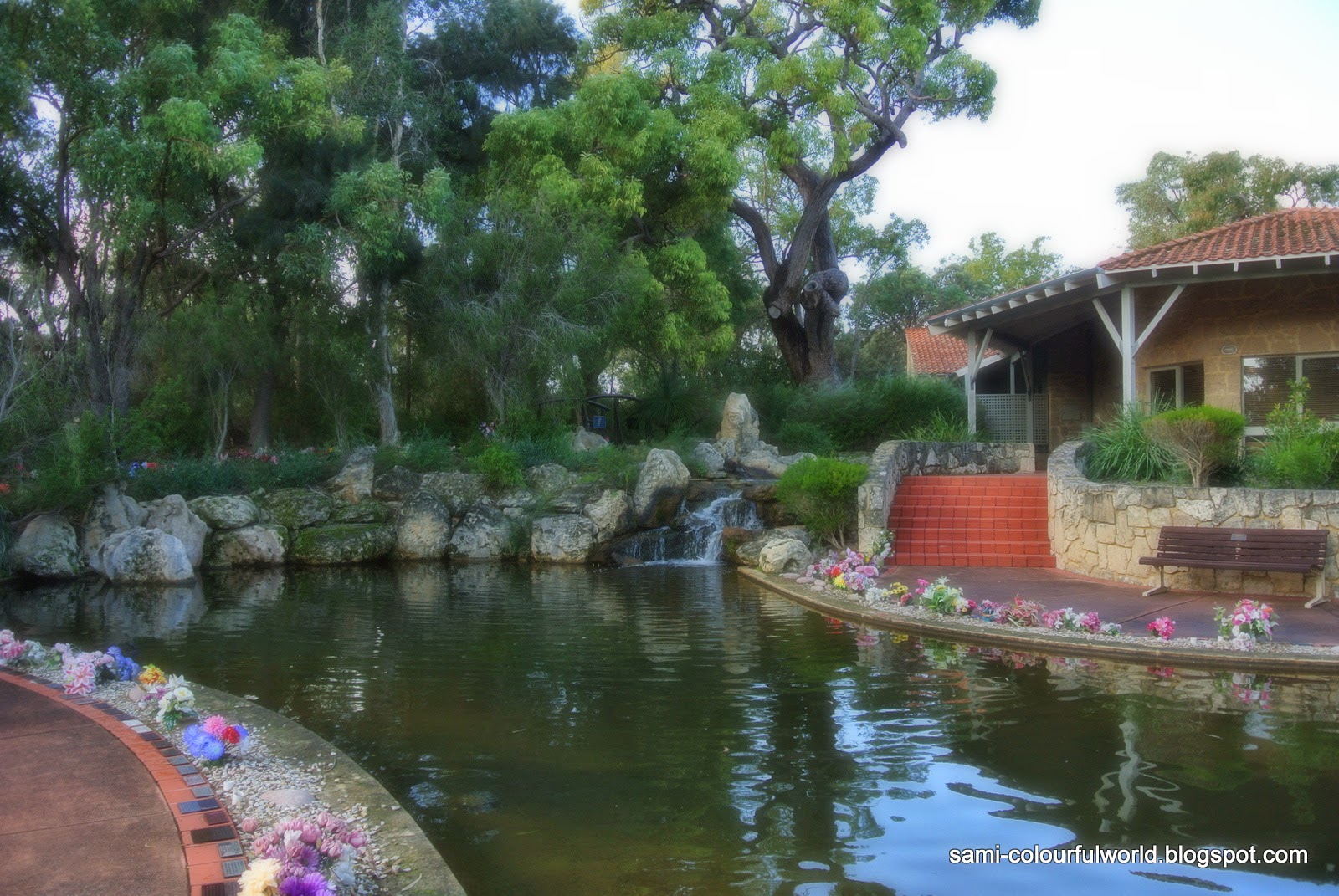 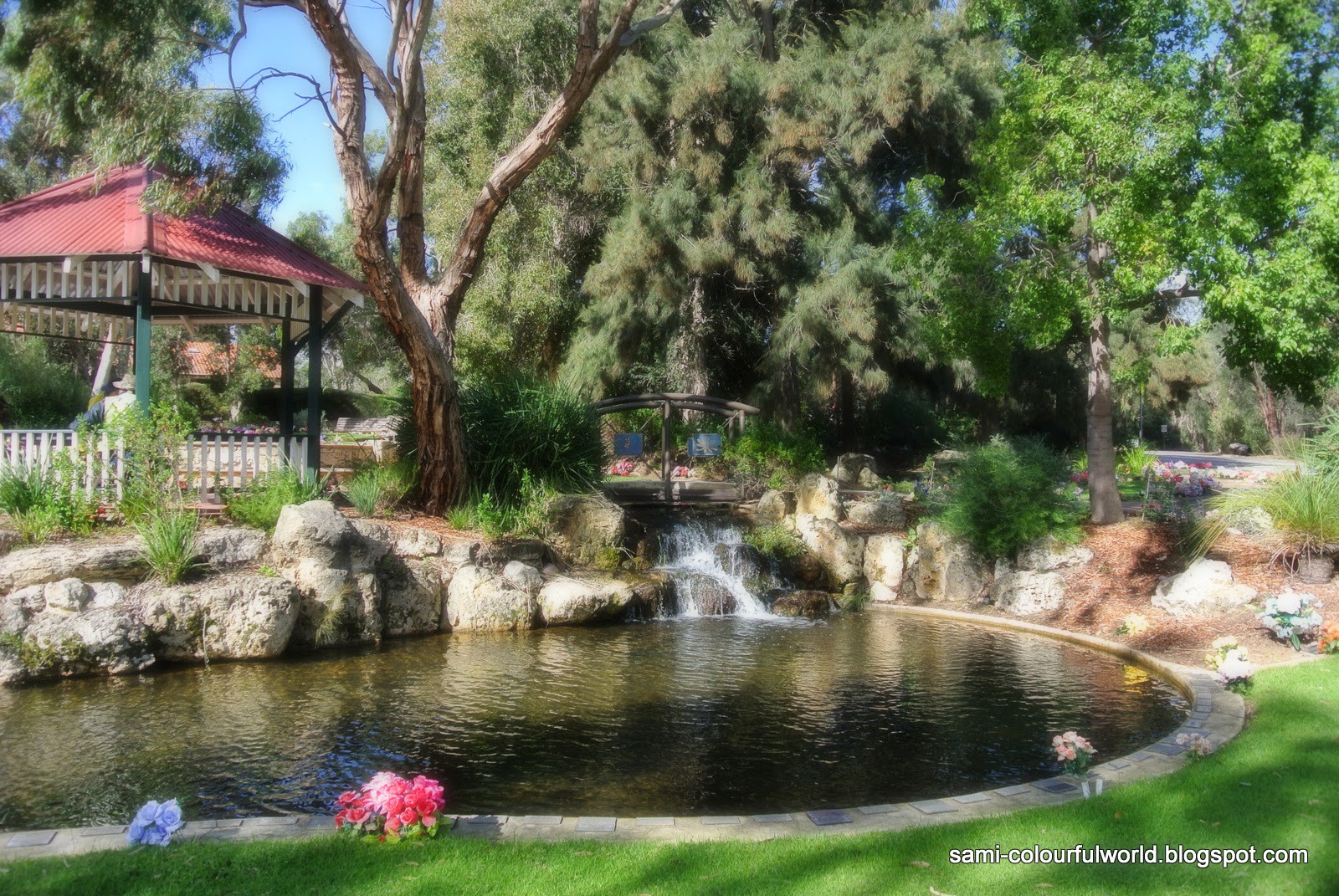 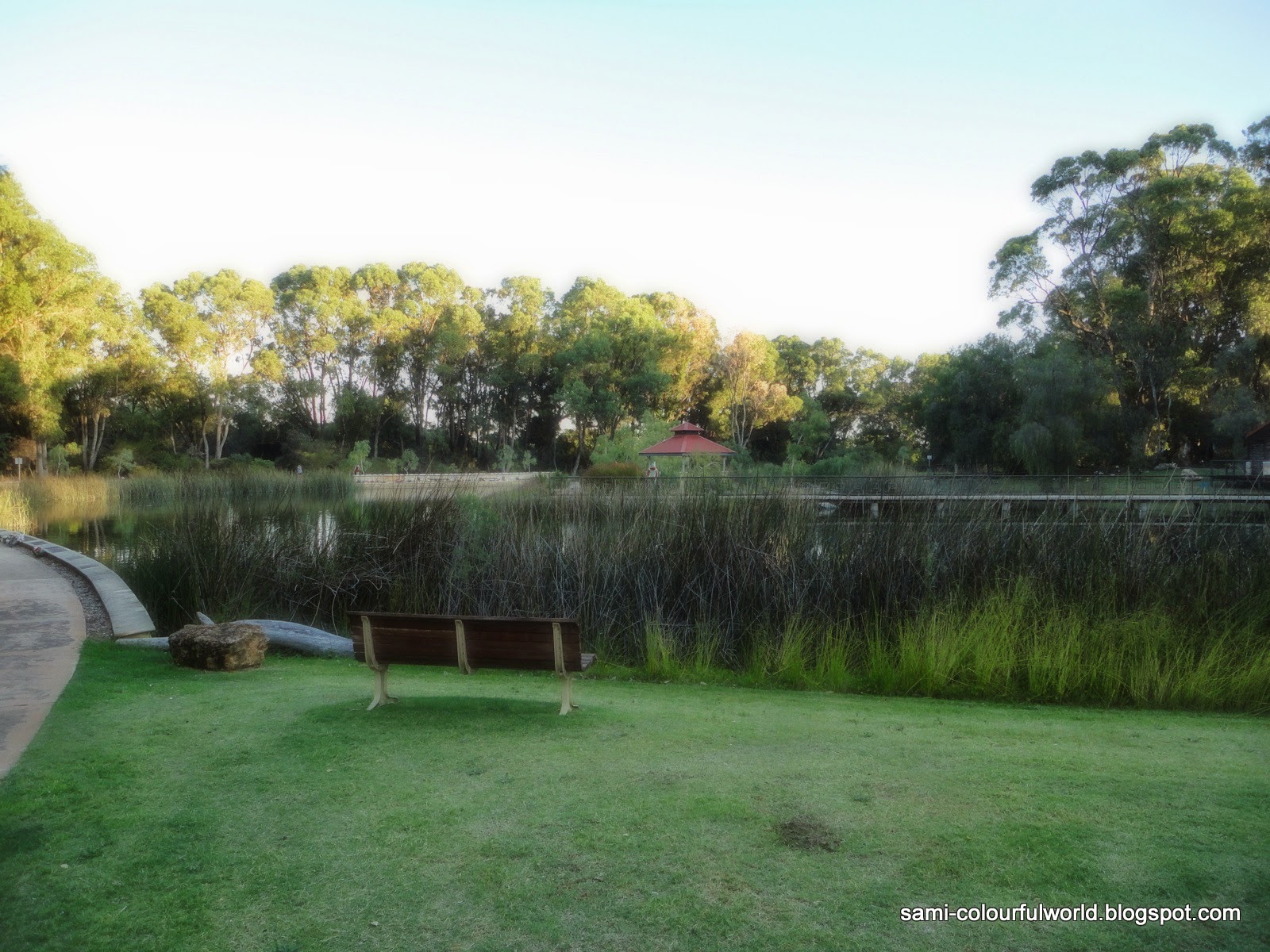 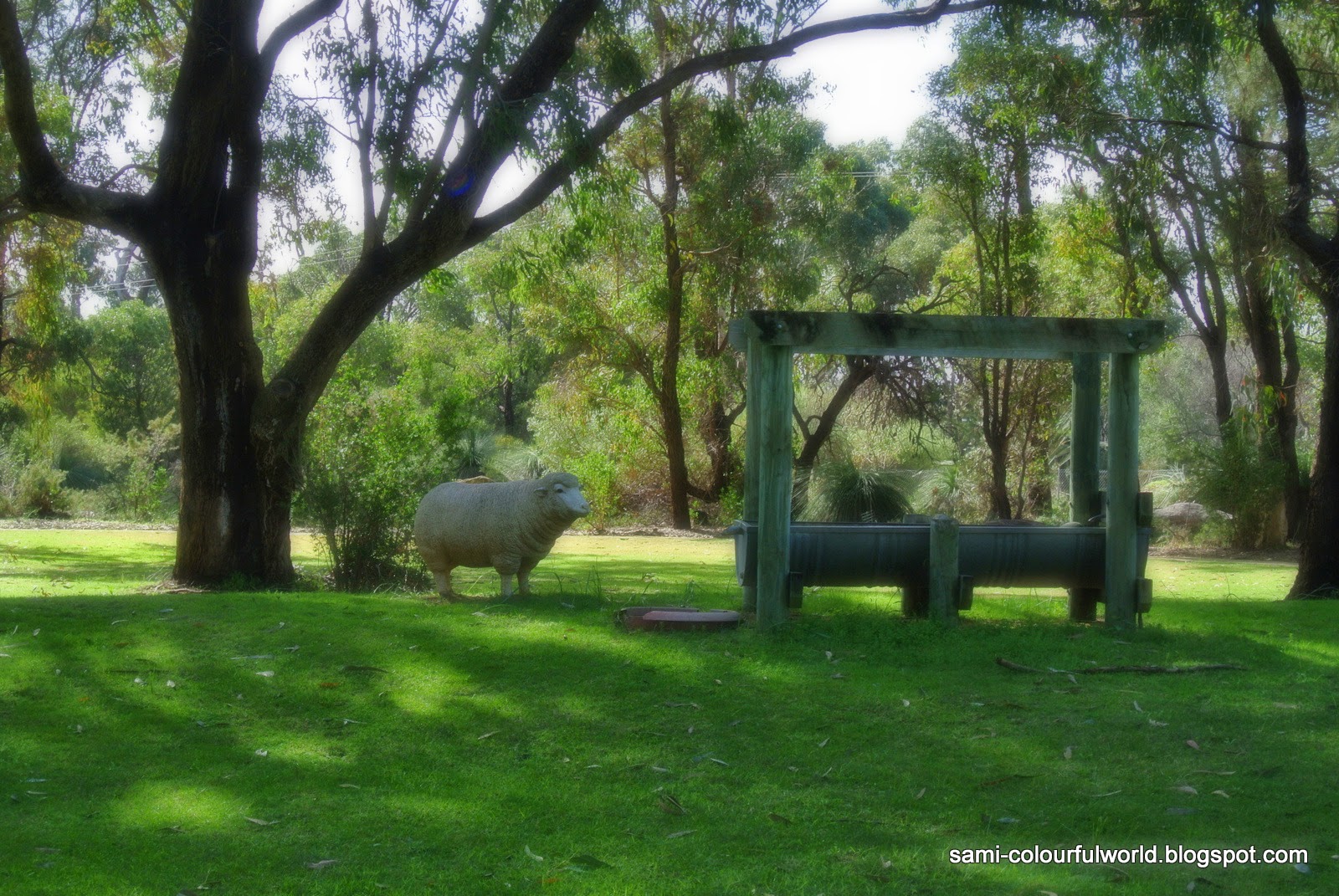 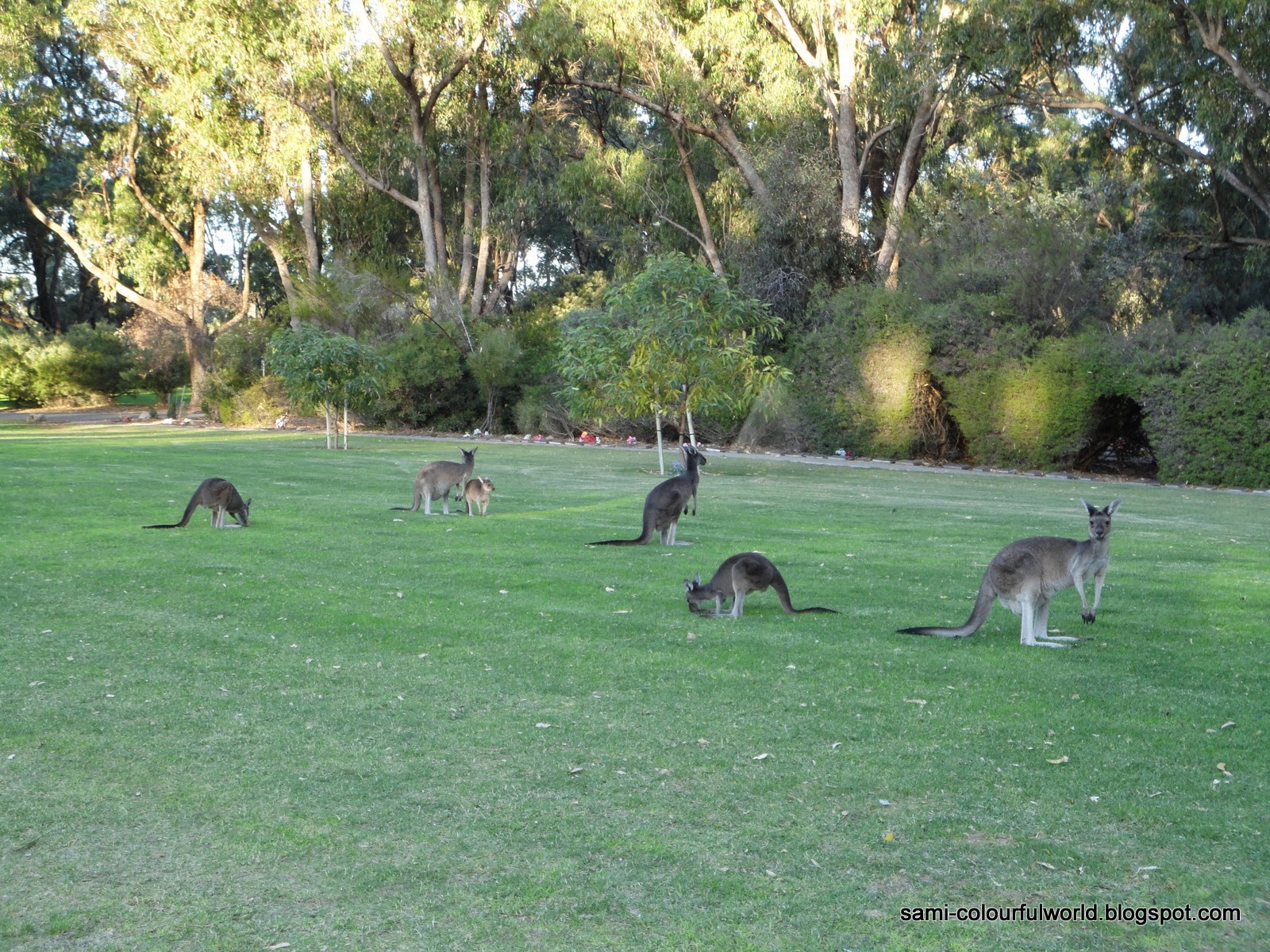 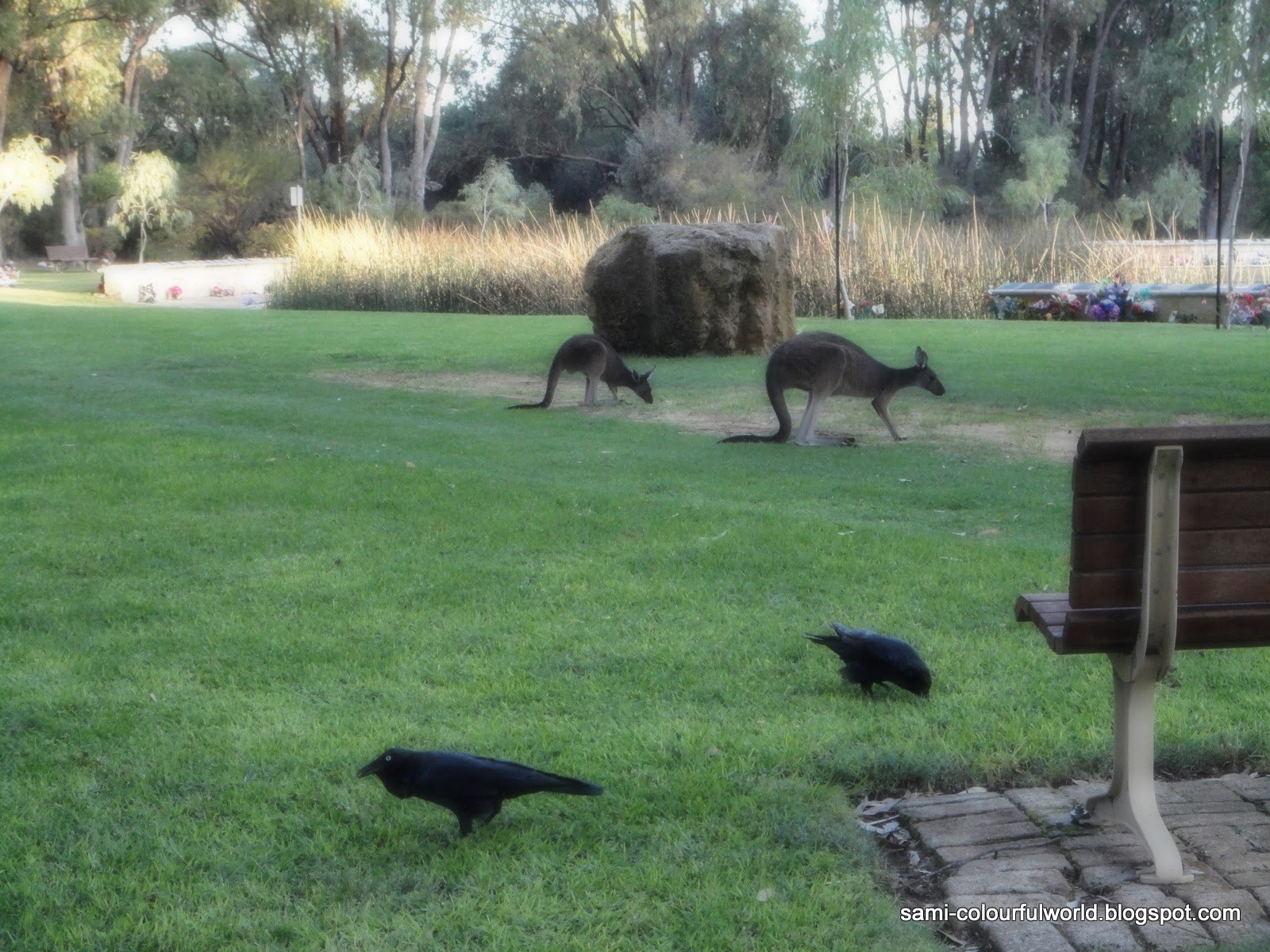 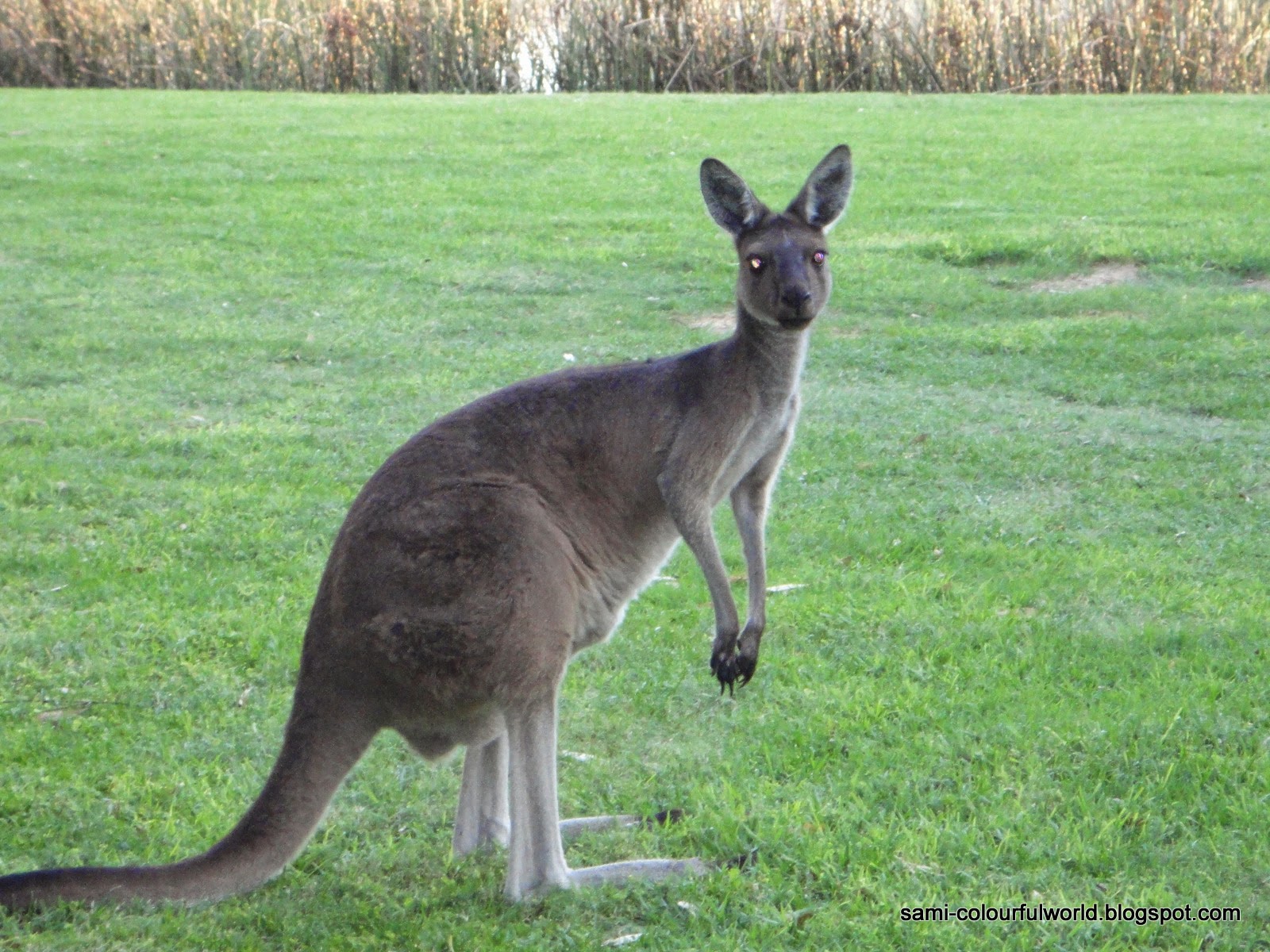