Following from the previous post about personalised number plates, I've got a few blue ones this time! Well, some are black in blue cars... 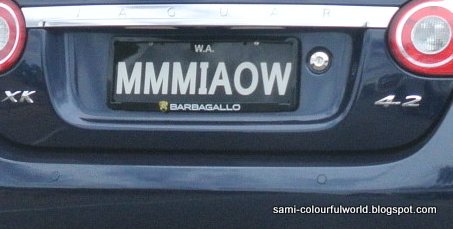 Miau - a cat lover or most probably meaning that the motor purrs.... 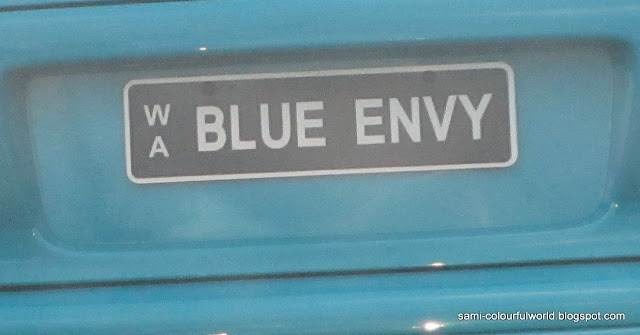 Blue envy? - I thought the colour associated with envy was green! I suppose because his/her car was blue, it was changed to blue.

Good Nanna -  Nanna is a term used for Grandmother. 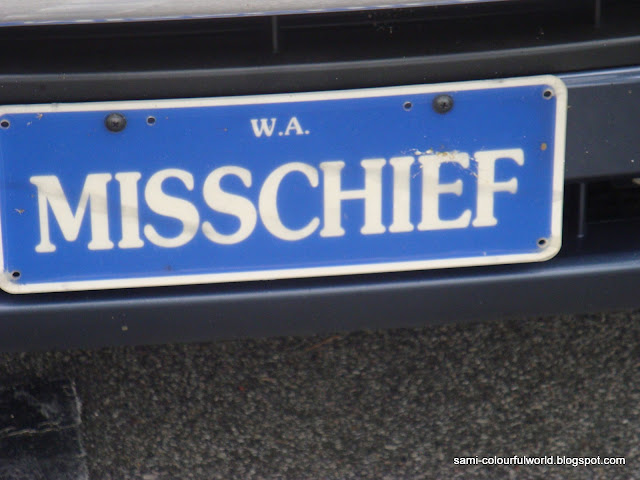 Misschief - Here it think it could be interpreted as mischief = naughtiness or playful misbehaviour or maybe the young lady is a boss - miss chief. 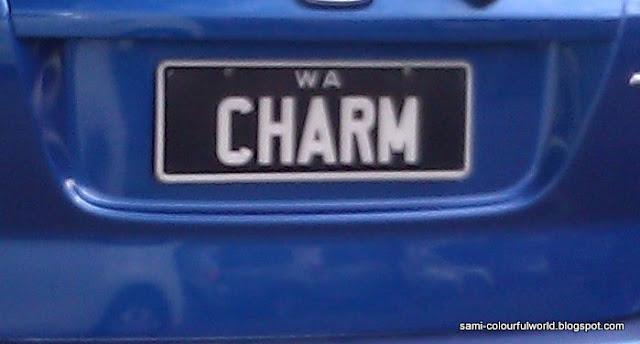 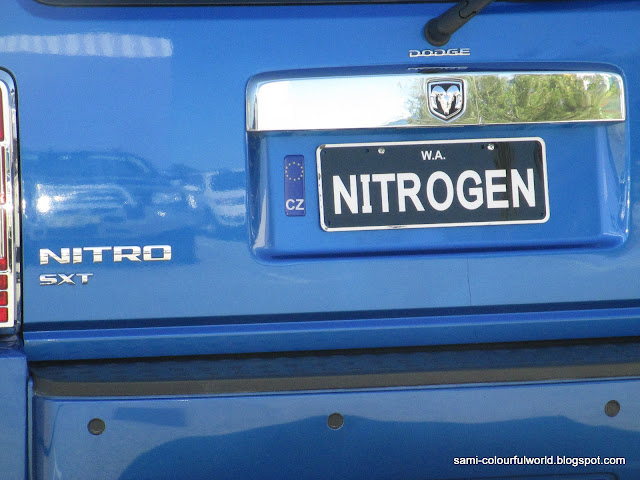 Nitrogen - they must have just taken the cue from the car's name - Nitro. 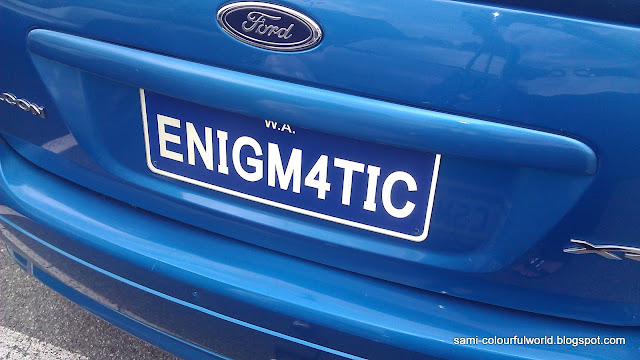 Enigmatic - I find it funny when people use numbers instead of letters in a word. 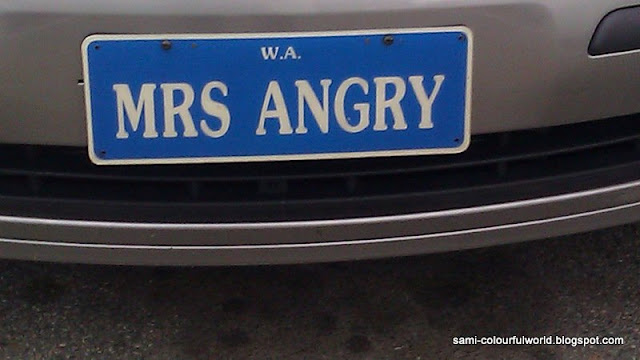 Mrs Angry - hope she's not always angry, could be scary to drive behind or maybe ahead of her, no?

Hope you enjoyed the blue number plates, which one was your favourite?
I might show some black number plates next time.

Another one of the murals recently painted at Curtin University for Public Form 2016.
This one was by Tunisian calligraphy artist Karim Jabbari, and you can see him below posing in front of his finished mural. 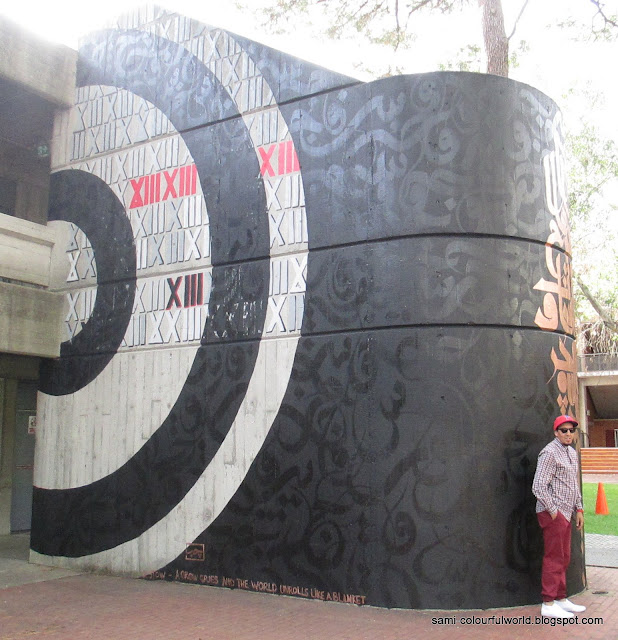 It started with a plain cement tower that was then painted in black, and then some hieroglyphics were painted in a shinier tone of black. On the other side of the tower the face of a clock was taking shape.


Hope you enjoyed the step by step progress of this interesting and elegant mural.
For more murals from around the world follow this link.

For the last couple of years I've been collecting photos of interesting number plates that I see during my drives around Perth, and I've photographed over 500 of them.

In Australia if you wish to chose a personalised number plate for your car you just have to pay a yearly fee for the privilege.

There's hardly a week that goes by that I don't find an interesting one - sometimes I find them humorous, they have a meaning, but occasionally I just can't understand what they mean...

Here are a few of them, hope you find them amusing. 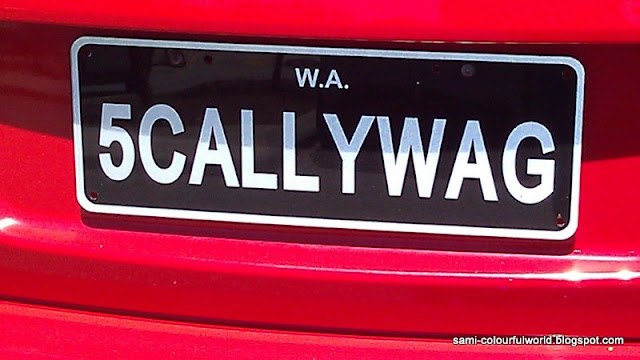 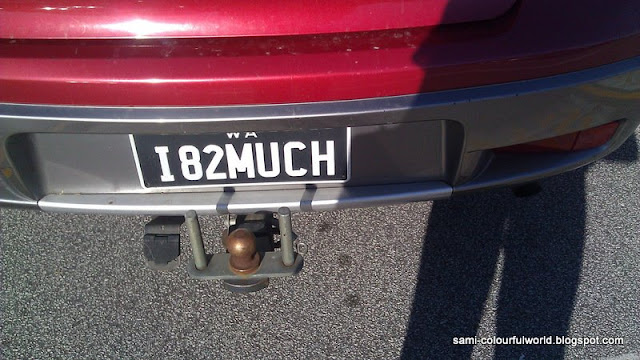 I ate too much  - don't know if he meant, was the car big or was it the owner who was big? 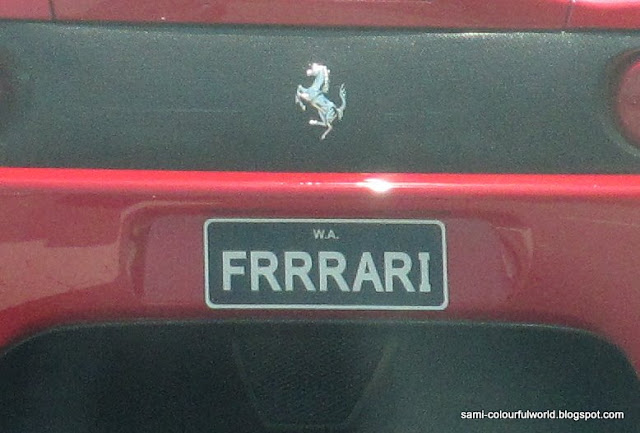 Ferrari - a self-explanatory one, a nice red Ferrari! 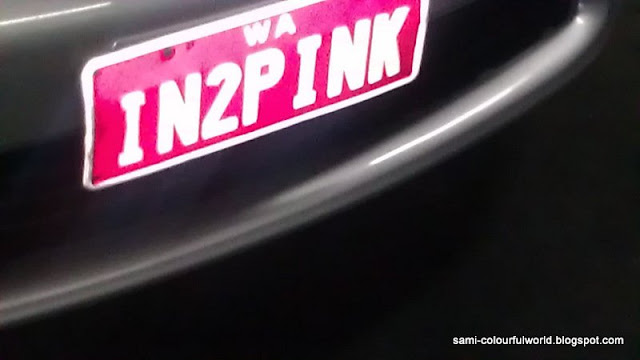 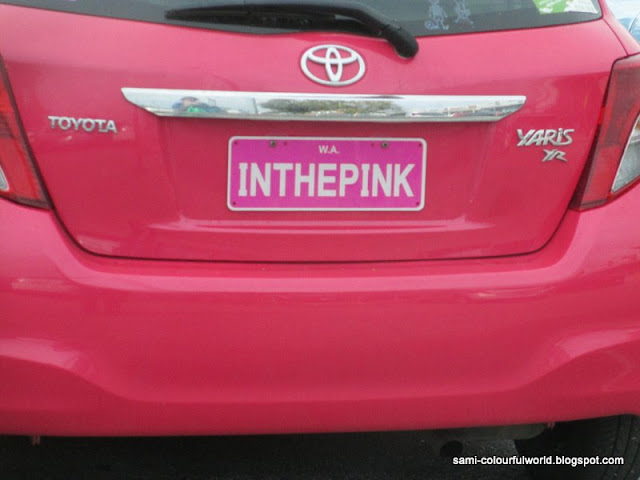 And the last pink plate - Boo Boos = silly mistake or small injury.
Was the car a mistake? Or it is just a funny name?

Another one of the murals painted at Curtin University for Public Form 2016, this one was done by Amok Island.
Amok was born in Amsterdam and moved to Perth in 2009.
I didn't catch the start of the painting process like with the previous mural of "Add Fuel" that I posted last week, but just caught the middle and end of it!

He painted a banksia a popular Australian wildflower.


On the last day, Sunday 10th, when we went around the University Campus taking photos I saw Amok alight from the cherry-picker (elevated work platform), while the crew were packing up the painting tools and I asked if I could take a photo with him. I also told him I love his works that are spread around Perth and Fremantle and he thanked me. He seemed very shy.

Our garden - Passion vines and Frangipanis

After a few rainy days and cooler weather the garden is greener and the passion vine seems to have grown heaps!
A lot of beautiful purple flowers and a lot of passion-fruit already hanging from the vine.
The only problem is part of it seems to have taken over our wall mounted clothes drying rack on the side of the house, and a lot of fruit is already hanging from there...

I hope they leave space for me to hang my washing! 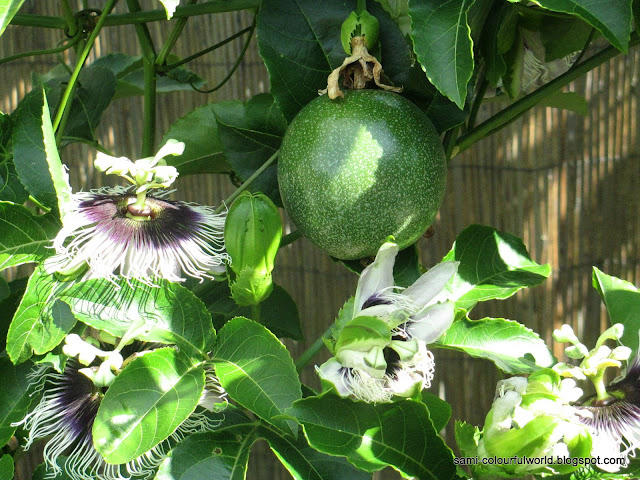 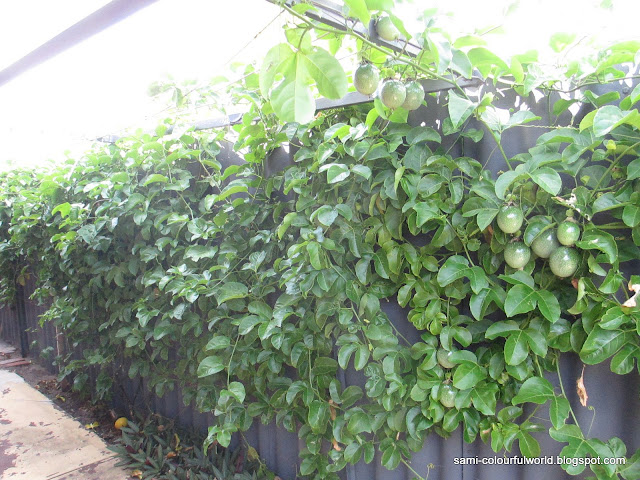 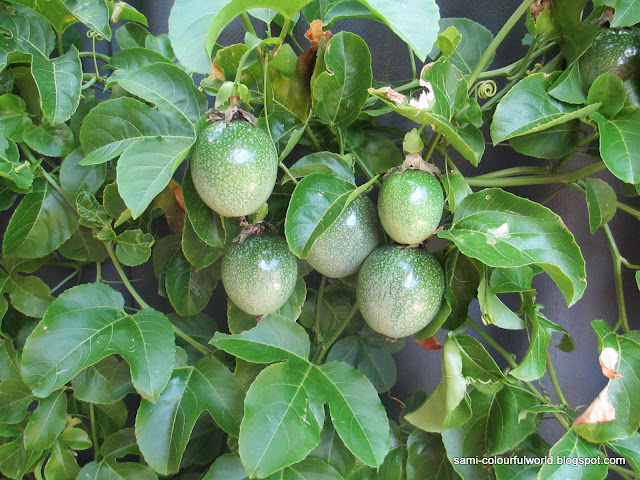 The beautifully scented frangipani is blooming too. Love the colour and the scent.
Looking forward to doing some gardening in the cooler weather this weekend.

Monday Mural - A taste of Portugal in Perth

Public Form 2016  means a new batch of exciting murals were painted around Perth from the 4th till the 10th of April.
The artists started by painting murals in the suburb of Claremont, then at Curtin University  and this week the artists go on to Albany in the South West to paint more murals there too.

Since I drive past Curtin University on my way to and from work, it was exciting to be able to accompany the progress of the 16 murals being painted across the campus.

And because I'm Portuguese, the first mural from this year's Form, is the one painted by Portuguese muralist "Add Fuel" aka Diogo Machado, based on the traditional blue and white Portuguese tiles. 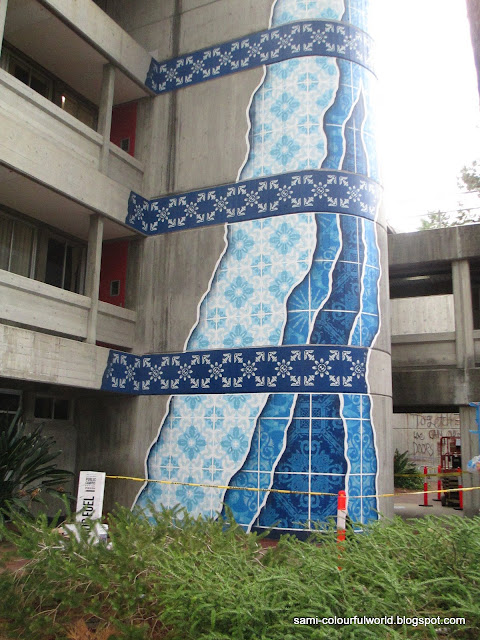 I'm not being biased if I say that his mural was my favourite!
I love blues, I love the Portuguese tile work, and the mural is really different and beautiful.

Just check the progress from beginning to end. 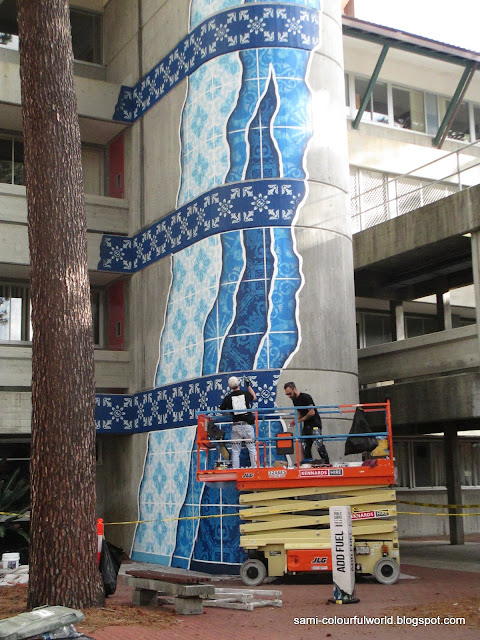 Last day- putting the finishing touches on the mural

We managed to catch Diogo after he finished his work, had a chat with him and of course took a photo with this wonderful young artist.
I wish him the best of luck with his work and hope you too like this "taste of Portugal" that I brought you today. 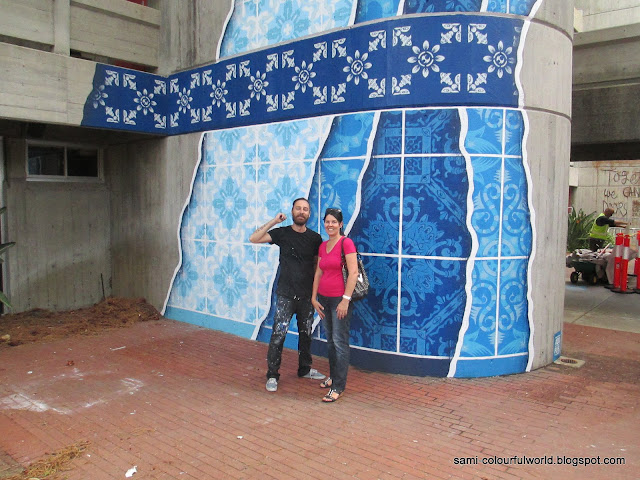 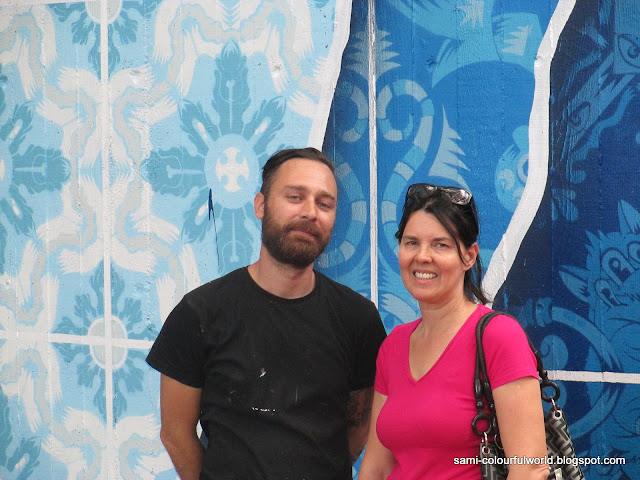 If you like murals please follow this link to check other Monday Murals from around the world. 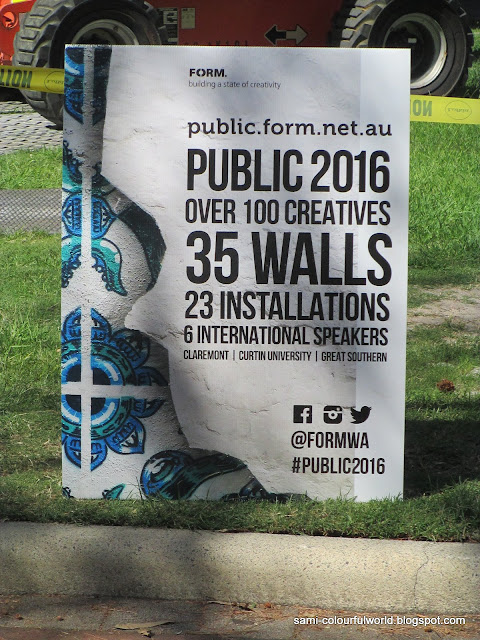 PS -"Add Fuel's" blue and white tile design was also imprinted on the Public2016 pamphlet maps and other banners as this one at the university campus, so quite an honour I would think!

These two lovely cars were parked near the area where we watched the army parade at the National Anzac Centre in Albany, back in December. 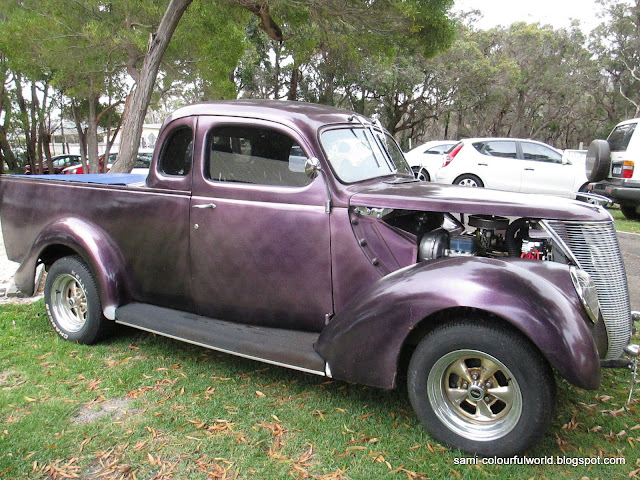 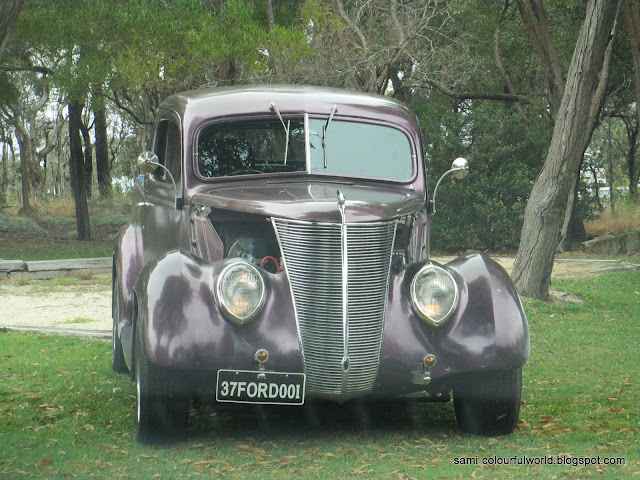 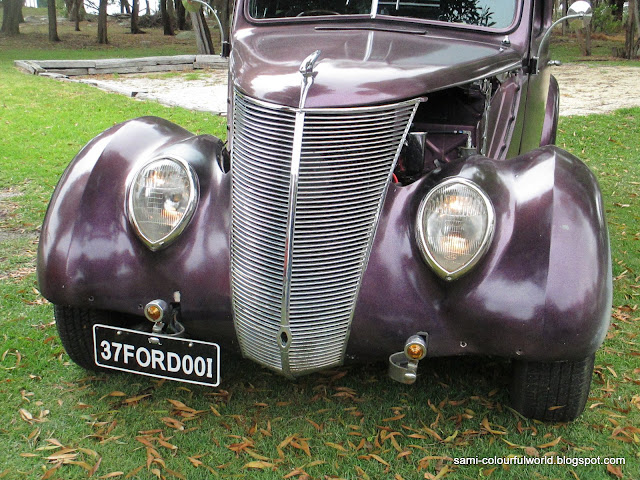 A Ford from 1937 I assume from the number plate.
I love these classic cars, specially when they have been lovingly restored! 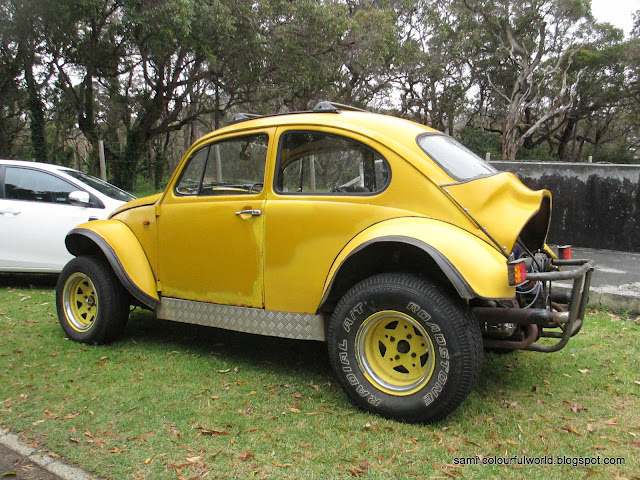 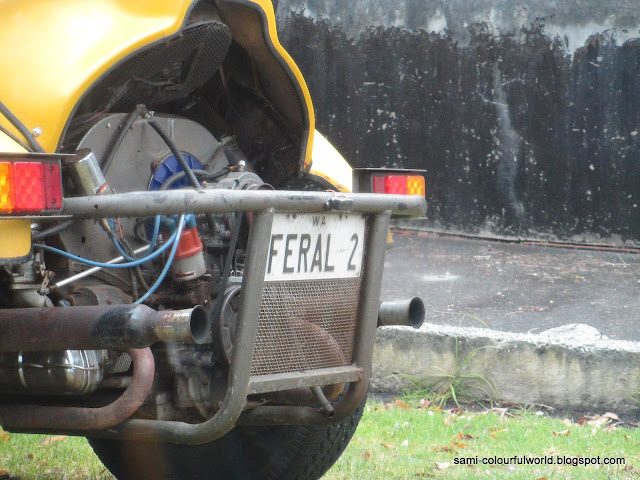 Don't know much about this converted VW, but looks quite cute too, specially with it's bright yellow colour and what about the number plate? Feral 2, so there must be a Feral 1 running around somewhere...

What do you think of these beauties?

Monday Mural - East and West, is the best!

On my recent visit to Fremantle I came across this fabulous 78mt (256feet) mural painted on the exterior of a furniture and homewares shop East West Design in South Fremantle. The building has two fronts, and this mural is on the South Terrace side. 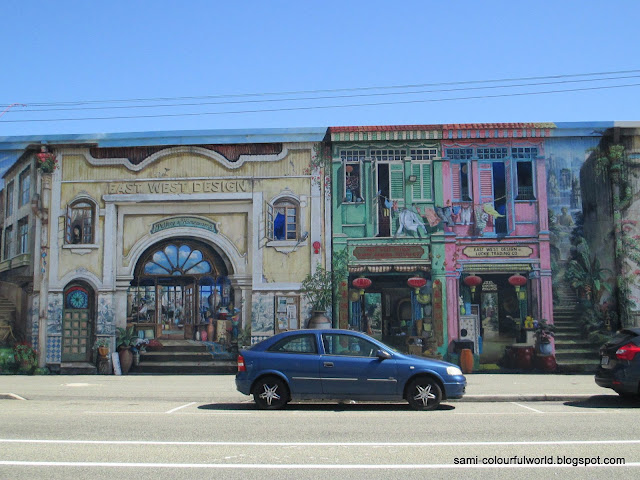 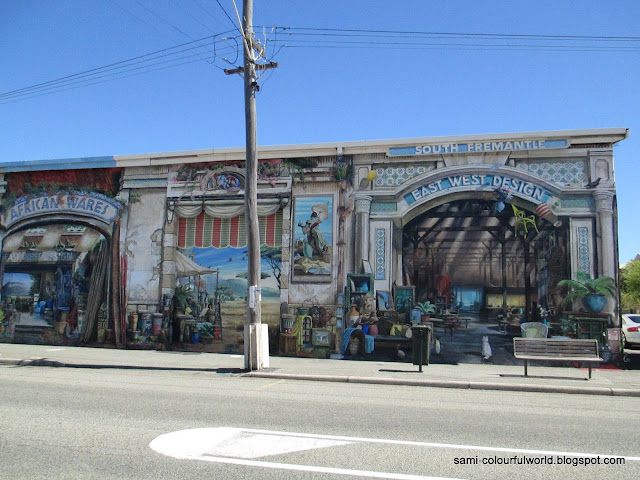 This extensive mural was commissioned by the owners of the shop, and was painted by the talented artist Graeme Miles Richards, a New Zealander who resides in Perth and it took him over 7 months to paint.

The various shopfront designs reflect the eclectic mix of wares they sell - from Asia, Africa, Europe.
I took over 30 photos of this beauty, so much to see... I'm finding it difficult to decide which to post, so here are a few of them.

If you would like to see more murals from around the world please check this link.

And I end with this little beauty, just check the elephant's trunk - it's a pipe sticking out the wall!
Hope you enjoyed them.