A to Z of Australia - I is for Islands (Part III)

Finally my last post about Islands in WA, hope you have been enjoying them.
In this post I write about Penguin Island which is my favourite of them all!

Garden Island is a limestone outcrop, about 10km long and 1 and 1/2km wide, just 5km off the coast of Rockingham, linked to the mainland by a road.
It is now the base of the Royal Australian Navy.

Although discovered by the Dutch (not named but shown on Dutch maps in 1658,
it was named "Ile Buache" by Baron Hamelin the Captain of the Naturalist, one of the
3 French ships that visited between 1801 and 1803. (Jean Nicolas Buache, was a
marine cartographer in Paris).
The island was renamed "Garden Island" in 1827 when Captain James Stirling, prepared a
garden and released a cow, two ewes and three goats to pasture. The first settlement of
450 people was made in 1829 in a place called Sulphur Town. The island was an important
anchorage and disembarkation point for ships until 1897, when Fremantle´s harbour was
completed.
After World War I, it became a holiday resort with wooden cottages erected at the bay, and
during World War II, gun batteries were located at the island, as part of the coastal defence
system for the Fremantle Harbour facilities. At that time, the island also became part of a
training base for the Secret services, known as "Z special unit".
Following the war, the island reverted to a holiday resort once again, and the home of the
Royal Australian Navy reserve fleet.
In 1973 the 4,3km causeway linking the island to the mainland was finished and as of 2008
the island is now used as the main naval based on the west coast of Australia, home to five
frigates and all the submarines of the Australian Submarine Service and base to the
Navy diving teams.
Access to the island is no longer allowed to the general public, unless granted by the
military.

Penguin Island is located 45 min south of the city of Perth, and a 5min ferry ride across
from the suburb of Shoalwater (near Rockingham).
The ferry departs on an hourly basis from 9am till 3pm and the last ferry returns to base
at 4pm.
An unlimited day ticket costs $12 and if you wish to include a visit to the Discovery Centre,
where the penguins are fed the ticket costs $17,50.
The island is opened from early September to early June including weekends and public
holidays (except Christmas day), but is closed during winter when the penguins come
ashore to breed.


The Discovery centre hosts 3 daily Penguin feedings at 10,30h, 12,30h and 2,30h,
although the Sunday we went there, the ranger said the penguins were already on their
5th meal, so not very interested in eating any more!


They have 10 Little Penguins, 9 males and 1 female. The eldest was a 19 year old male who
had mated with the only female for the past 10 years. Penguins mate for life, and until he
dies they will be a couple. Apparently in the wild the Little Penguins will live for about
14 years but in captivity they can live longer, and they are only about 30 to 40cm high.
While they were fed on tiny pilchards, the ranger was telling us the story that they wanted
to train the penguins that were hand-reared to go out into the wild, but once they tried
putting live fish in the tank and all except 2 penguins left the tank and looked through the
glass from outside the pool, at the fish swimming around. The two inside were apparently
being chased by the fish instead of the other way round!
So, the poor penguins would never survive at sea on their own, as they are too used to their
regular feeds and contact with humans. 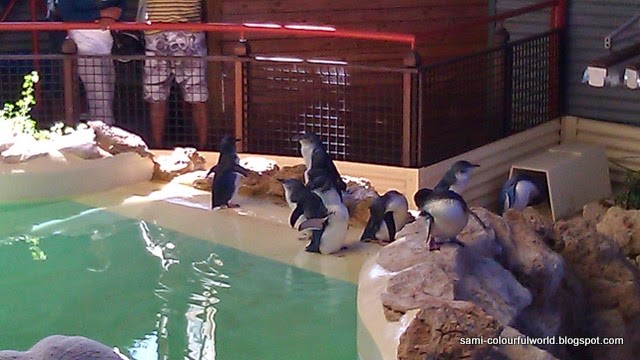 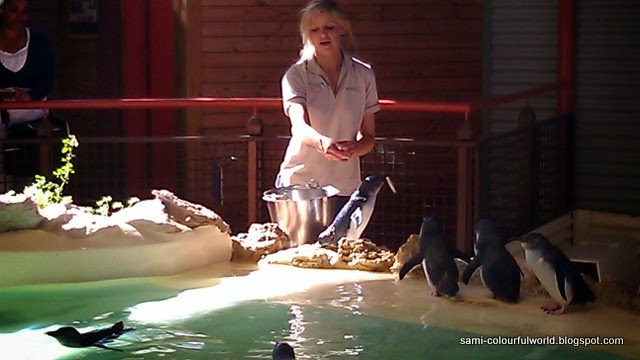 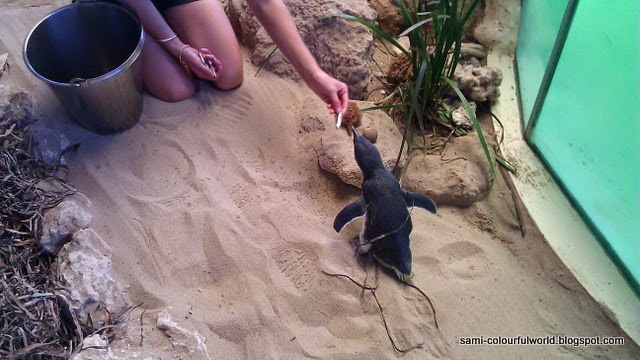 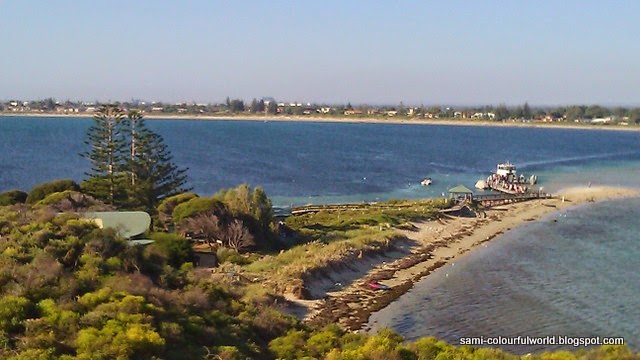 The island can be accessed on foot from the mainland during low tide, but it´s
recommended that when you return later in the day you take the ferry,
as last year a couple of people died when walking across as they couldn't swim
and the current was too strong.

We just visited the Discovery centre and walked around the island this time,
but I would certainly love to go back, so next time I have overseas visitors I
will certainly take them to the island and maybe do one of the longer cruises
around the area.

The island is small, with a 2km trail around the island and a lookout point
in the middle of the island. Apart from the walk, there is a lovely picnic area,
and you can swim, surf, snorkel, kayak or bird watch.

The island and surrounding Marine park is a haven for Pelicans and the very noisy
seagulls, sea lions, dolphins, stingrays and over 50 species of birds.
From the island you can do a 45min "Penguin and Sea lion cruise" on a glass
boat, that costs $34,50, or you can do a 90min "Shoalwater Safari cruise" costing
$85, visiting sea lions at Seal Island, the playful wild dolphins, stingrays and pelicans.

Don't you think Penguin island is such a cute island?
Are there small and  interesting islands where you live?