A to Z of Australia - I is for Islands (Part I)

Australia is the largest island in the world, and it is surrounded by 8,220 islands within its maritime borders.
Most of them would be uninhabited of course, but there are some pretty big islands, big enough to be independent countries!
The largest of these islands is Tasmania with 68,332km2, and in turn it is surrounded by another 1000 islands! Tasmania is one of the six states and 2 territories that Australia is divided in. I´ve never been to Tasmania, but it´s a place I would love to visit in the future.

The only island I have visited in the Eastern States, is "Phillip Island", in the State of Victoria, located 140km south of Melbourne.
It´s 26km long and 9km wide with an area of about 100km2. A concrete bridge of 640mt connects the mainland town of San Remo with the island town of Newhaven.

In the 2001 census, the island population was around 7000, but during summer the numbers swell to 40 thousand. The major tourist attraction is the Penguin Parade that brings to the island 3,5 million visitors a year, to watch hundreds of Fairy Penguins (or little Penguins), that come ashore in groups. There is also a wildlife park where wallabies and kangaroos roam free and can be hand fed. The western end of the island is also home to the largest fur seal colony in Australia. 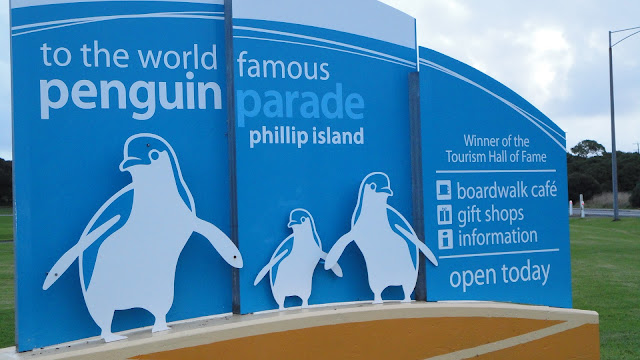 Last year, when we visited Phillip Island it was winter, and the rain and bitter cold wind prevented us from staying to watch the Penguins return home, which was a pity, as that had been the purpose of our visit. Luckily we managed to see the cute penguins in the Melbourne Aquarium a few days later.

The island has also hosted major surfing events like Rip Curl, and is linked to the history of Australian motor racing, having been the site of the original Australian Grand Prix in 1928.
In 1956 the new Grand Prix circuit opened and has held various races from Bathhurst 1000, Australian motorcycle grand prix, superbike world championship, V8 supercars, and the Australian driver´s championship. (Since 1985 the Australia Grand Prix is now part of the Formula 1 circuit and is run in Albert Park in Melbourne).

As the day was miserable we stopped at the Chocolate Factory and had some lovely hot-chocolate drinks, tasted some of their chocolate and bought some to take home.
We drove around the island, found some lovely beaches which could be wonderful in summer, sweet holiday villages, and also came across these strange birds, that I later found out were called "Cape Barren Geese". They are about the size of the domestic goose with pale grey feathers, pink legs and a yellow area on the base of their beaks.

The live on small windswept islands in the southern east coast of Australia, and venture to farming areas in search of food. They are able to drink salty water which enables them to live on offshore islands all year round.

Email ThisBlogThis!Share to TwitterShare to FacebookShare to Pinterest
Labels: A - Z of Australia, Melbourne