Our European holiday - Bruhl and Signs

Together with Karina and Thomas spent Saturday 9th July exploring the town of Bruhl 20 km south of the Cologne city center, and at the edge of the Rhineland Nature Park, a famous nature reserve. 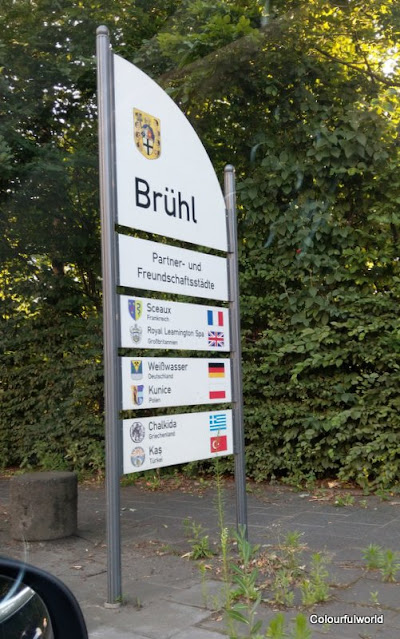 Later in the day we were driven to a quiet fluvial beach by the River Rhein, not far from Bruhl. Tugs pulled container ships down the Rhine, kids played in the water, ducks swimming... very picturesque.
The skies were getting dark and a few drops started falling just as we rushed to the parked car.

We drove back into Bruhl for lunch and found a Mexican restaurant where we took cover from the rain while we had something to eat.

Eventually the clouds cleared and we walked to the nearby Augustusburg and Falkenlust palaces.

The palaces are two of Germany’s most important examples of Baroque and Rococo architecture, served as models for numerous other German courts. The adjacent Schlosspark (Palace Park) is an internationally recognised monument to the art of gardening, designed in the French style but with elements of English landscaped gardens.

The Augustusburg palace was built in 1725 as a summer house for Clemens August of the House of Wittelsbach, Archbishop-Elector of Cologne. It took over 40 years to be completed because Clemen's brother didn't like the first version designed by a German architect, so it was demolished and construction commenced again under a French architect. It has 120 rooms.

An hunting lodge, Jagdschloss Falkenlust, was also built, which would serve as his falconry base and as a private retreat. The two residences are linked by an avenue running through the extensive Palace Park. (We didn't walk to the hunting lodge)

From 1949, Augustusburg Palace was used as a venue for official receptions held by Germany’s president and federal government - where for example Queen Elizabeth II, Mikhail Gorbachev, Nelson Mandela and even Pope John Paul II were received by German presidents.  Today, Augustusburg Palace and the Falkenlust hunting lodge are open to the public as a museum. 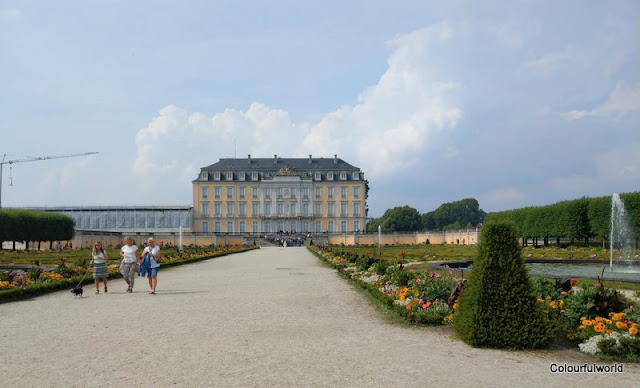 After the visit we went home to get ready to go out to dinner. We then walked around 15 min to the city centre to have dinner at the Italian restaurant - Piato -
at Markt Str 18 .
The food was delicious, service was perfect, and there was even live music by a young man playing the saxophone. I heard a few people addressing him in English, so not sure if he was an Englishman.
After dinner we went home to finish packing, as Karina, Jose and I were taking a very early train (at 9,15am) from Cologne station to Braunschweig Station, the town where we lived almost 6 years in the early 80's and where both my kids were born.
SIGNS:

For other signs from around the world please check Tom's blog - http://backroadstraveller.blogspot.com/
Signs meme is published on Wednesdays.
Posted by Sami at 21:13 28 comments:

Thanks Sami
More airport murals, this time in Changi Singapore Airport, taken during our layover on the way to Frankfurt in July. 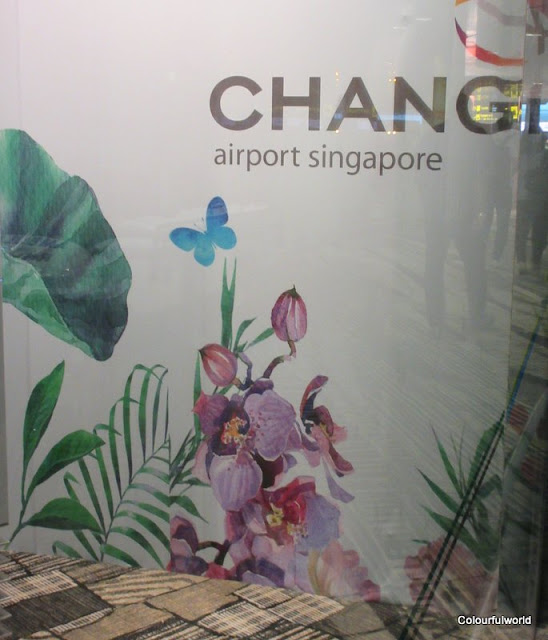 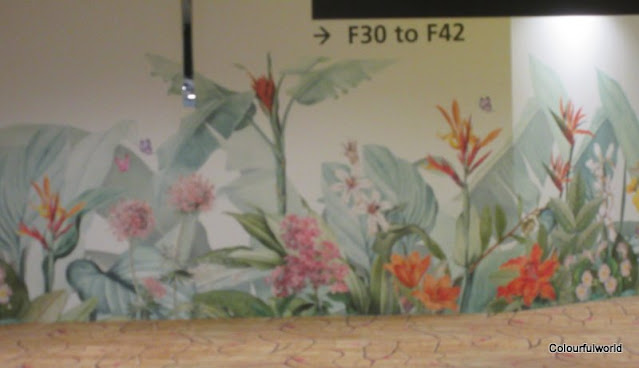 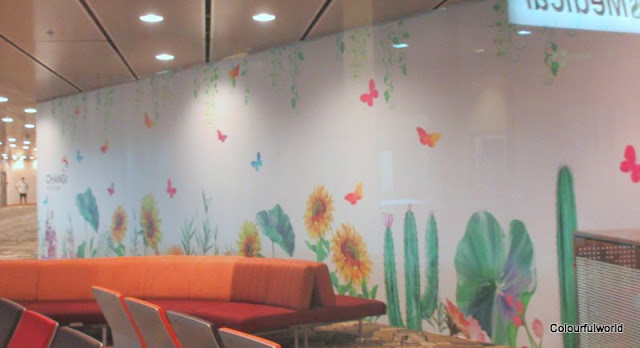 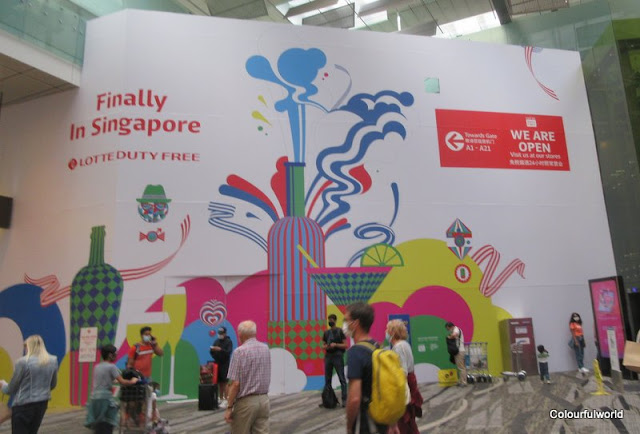 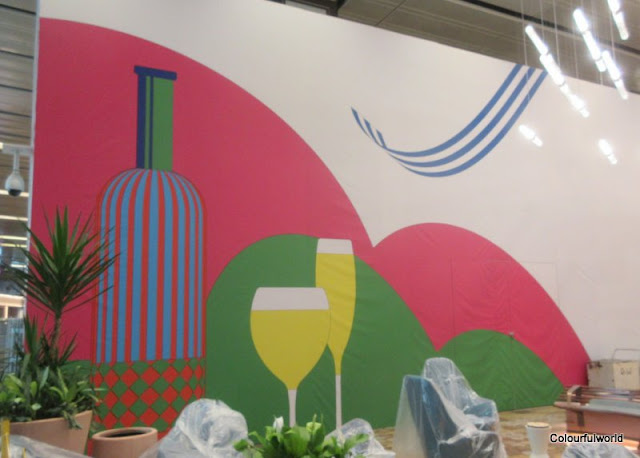 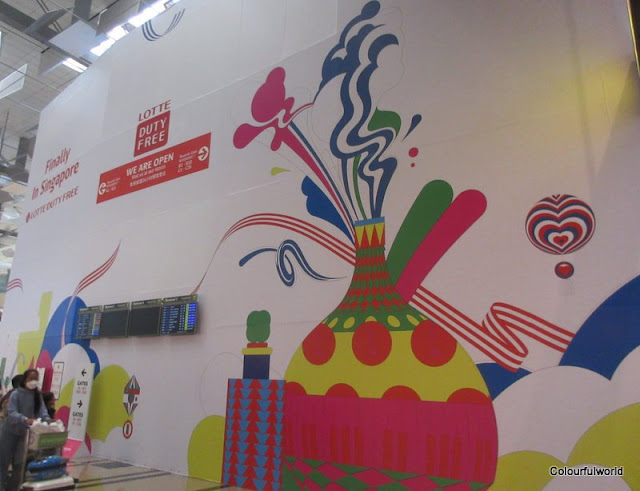 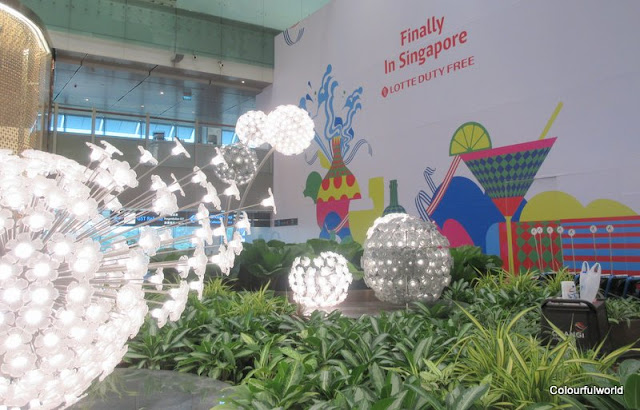 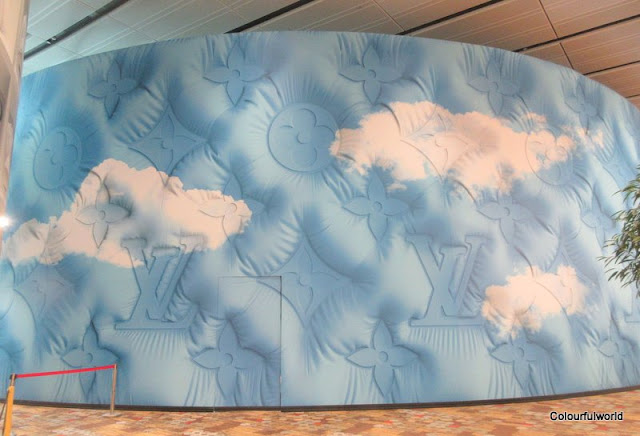 And this one, not really a mural, but I though this aquarium like entrance to the Louis Vuitton shop was quite striking and colourful.

As our daughter Karina was working from home for the first few days of our stay, Jose and I had breakfast at a cosy French Cafe in the centre of Bruhl, (C'est la vie, Uhlstraße 49), then took the train to Cologne, just a 30min trip.
Cologne is the fourth largest city in Germany, as well as one of the oldest in the country with a history dating back to the first century AD, when the Romans founded the city they named Colonia. 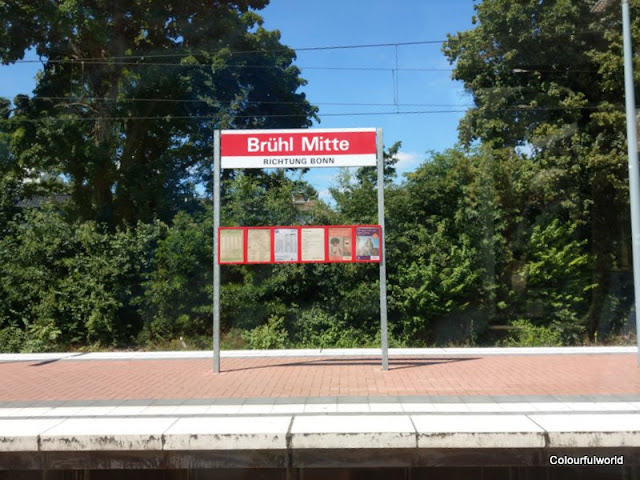 Steps away from the main station is the Cologne Cathedral - a Catholic cathedral built in the Gothic style, which was started in 1248 and finished according to the original plan in 1880.
It is the world's third tallest church, the second in Europe, and Germany's most visited landmark with an average of 20 thousand people a day.
Maintenance work to the Cathedral is carried out constantly, as wind, rain, and pollution slowly eat away at the stonework, and there is a non-profit organization, the ZDV, which was founded to promote and finance the never-ending restoration work. 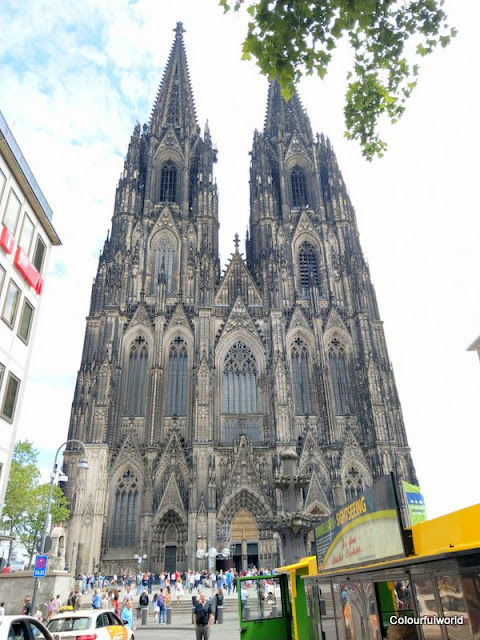 The Cathedral is indeed stunning and as we walked around admiring the construction, the art, the floors, the stained glass windows, the statues... we wondered how the builders and the artists managed to achieve such beauty, such greatness, such engineering feats without the building technology we have nowadays. 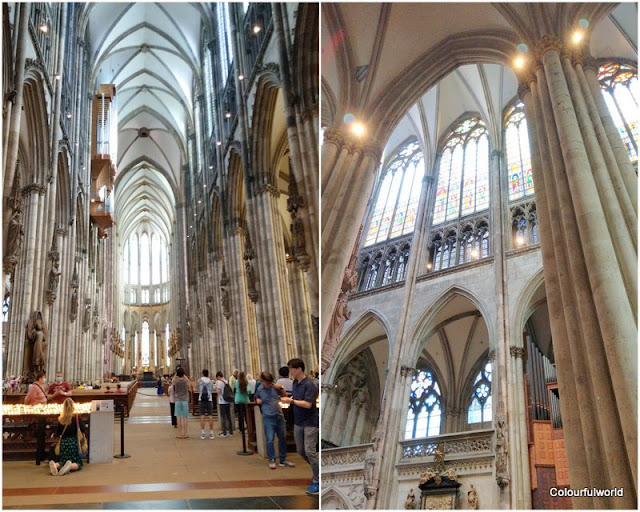 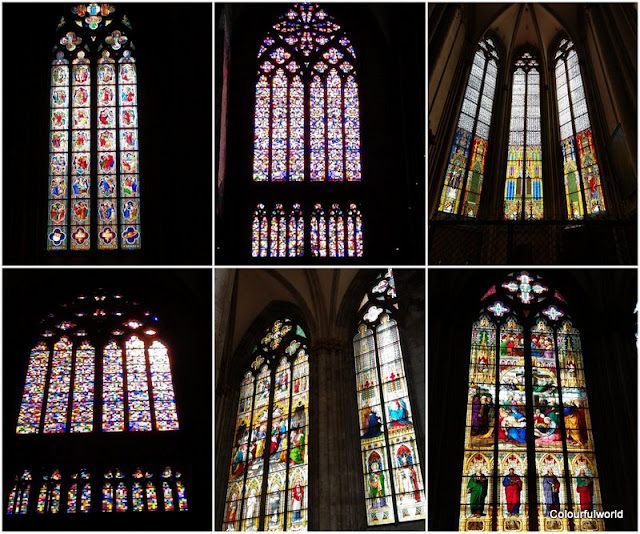 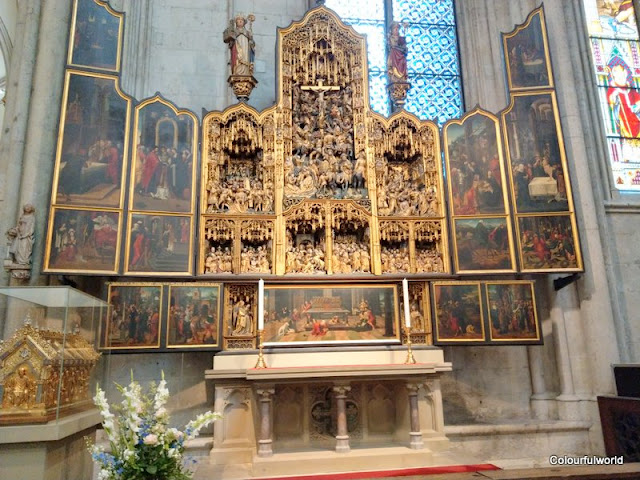 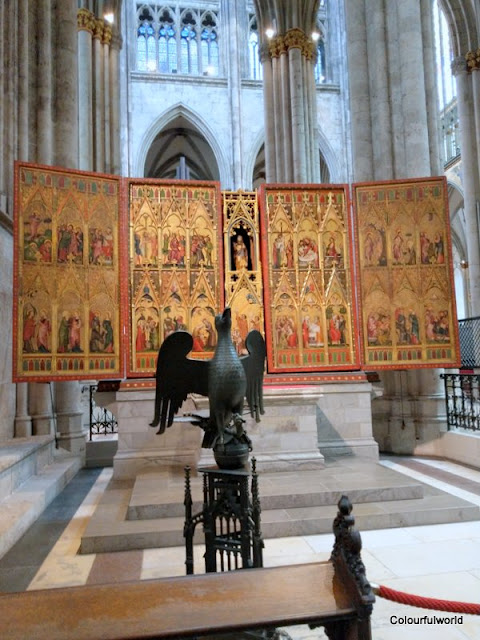 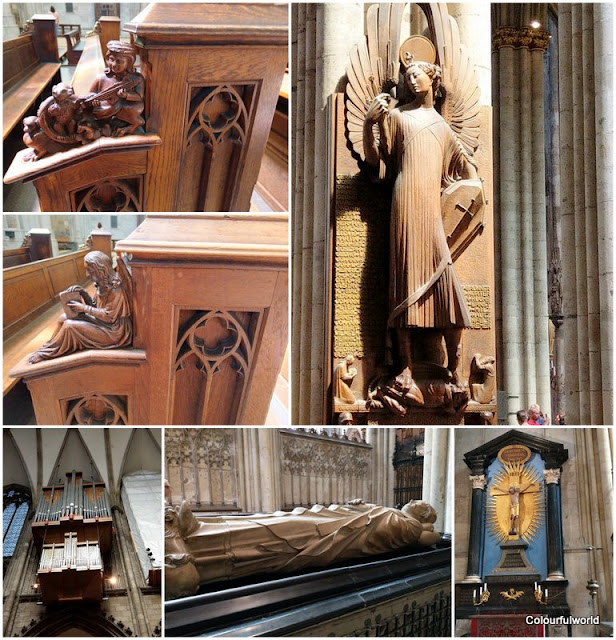 We left the Cathedral and looked for a coffee shop to have a refreshment, and just around the corner at the Old Market Square we found lots of eateries with outdoor tables and chairs under umbrellas. We sat down at one of them and ordered drinks and snacks.

Nearby was the Heinzelmännchenbrunnen (Heinzelmännchen/Pixies fountain) in front of the Früh brewery. It was built in 1899 by Edmund Renard and son Heinrich and commemorates the Heinzelmännchen (little gnomes) - the little people who according to the legend did all the work at night so that the people of Cologne could laze around during the day.     (You can read about the legend here:    https://www.travelsignposts.com/Germany/sightseeing/heinzelmannchenbrunnen-cologne

As we walked towards the Hohenzollern Bridge we saw the area behind the Cathedral where I presume the reconstruction work takes place. 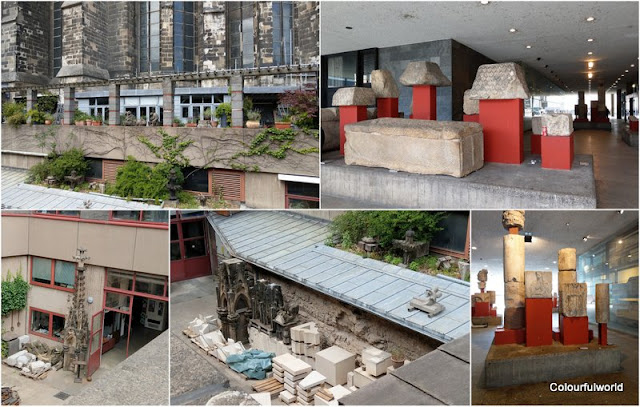 The 409,19mt (1,342.5 ft) long Hohenzollern Bridge is the iconic bridge over the Rhine, which was destroyed during WW2, and reconstructed. Originally a railway and road bridge after its reconstruction in 1945 it is only accessible to trains - over 1200 a day, and pedestrian traffic.
Named after the House of Hohenzollern, the rulers of Prussia and German Emperors, the bridge has four equestrian statues of Prussian and German emperors flanking each end of the bridge.
The bridge is famous for the countless number of lovelocks attached to the fence, a customs which started in 2008. Apparently the German Bahn (railways) sees no danger for the bridge and estimated that it could carry 15 tons of extra weight! In 2015 the number of locks was estimated to be 500 thousand!

From the bridge we walked along the banks of the Rhine to the charming historical Old Town with its narrow streets flanked by traditional old houses, pubs, and restaurants, museums, fountains and statues.
Behind the Fish Market is the Great Saint Martin Church, a Catholic church founded on the site of a Benedictine Abbey, erected between 1150-1250. The church was badly damaged during WWII and restoration was completed in 1985. 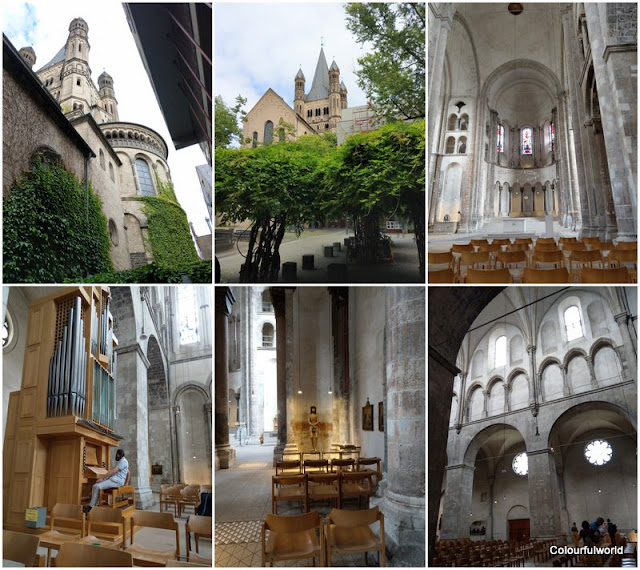 Cologne's City Hall (Rathaus) situated between two squares - Rathausplatz and Alter Markt, houses part of the city's government, with various structures in different architectural styles and includes the offices of the Lord Mayor, and is Germany's oldest city hall with over 900 years of history.
Another landmark on my list was the 4711 Cologne house. The traditional "Eau de Cologne" has been produced here since 1799. Nowadays they have many colourful bottles apart from the traditional one. 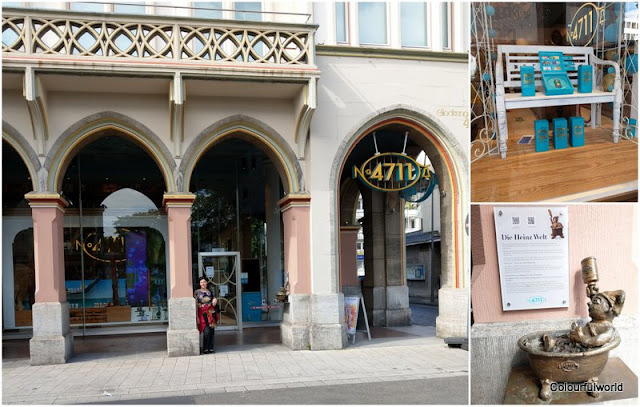 We ended our day in Cologne with a stop at a cafe for another drink and snack before going to the main station to get the train back to Bruhl. 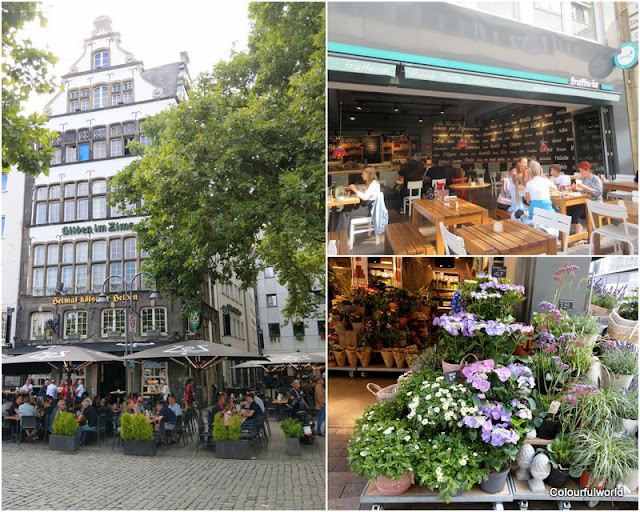 This advert at a pub by the Town hall was hilarious - "Beer is now cheaper than petrol, so don't drive on, drink a Kolsch (Cologne beer) on the spot at 1,80Euro" 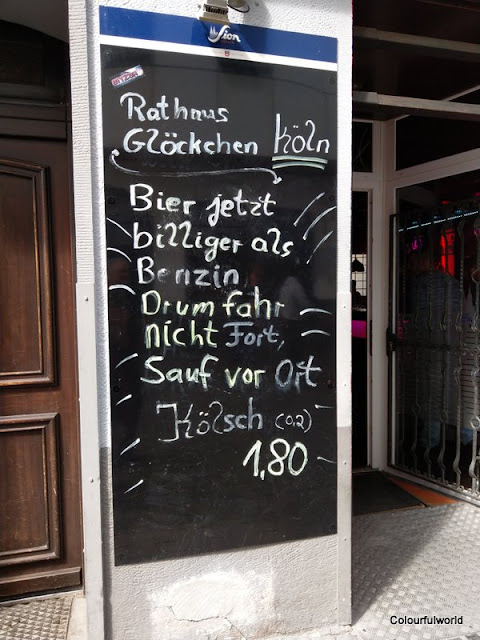