Amsterdam to Lisbon to Ponta Delgada

We left Amsterdam, on the 1st March, not without some drama, as our son-in-law had forgotten his French ID card, which is too big to be kept in his wallet. As we were checking-in when he realized that, and called my daughter who was on her way to hand in the hired car. She raced home to go and fetch it and still made it in time. Luckily we had gone to the airport 2 hours ahead!

I still managed to get the IAmsterdam photo I wanted, as there is another sign (apart from the one at the Rijksmuseum) outside the Arrivals hall at the airport and it was crowd free too. 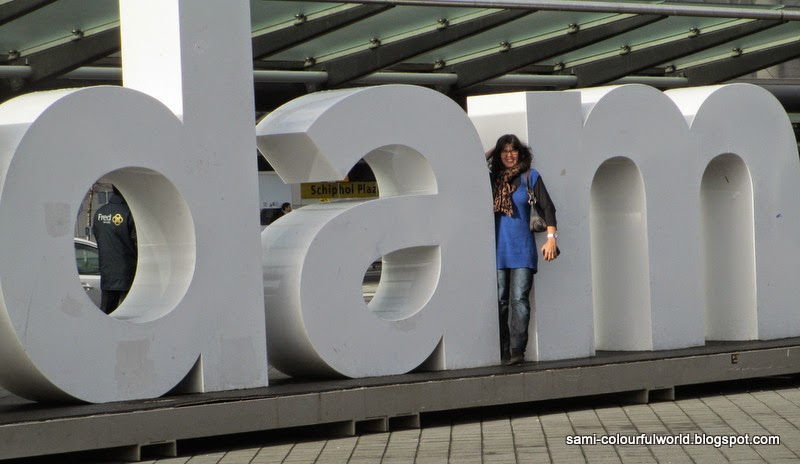 On arrival at Lisbon Airport we were greeted by my sister, and that evening we had a family dinner with my parents, niece, sister and brother in law and chatted well into the night.


Early the next morning, on my birthday (March 2nd), we got on a plane again to Ponta Delgada in the Azores island of Sao Miguel.
Our group consisted of my sister and brother in law, our daughter and her partner and us.
We were picked up by my husband's brother J who lives there, and because of the large group a car had also been hired.

Because the hotel check-in was only after 2pm, we decided to do some sightseeing and only go to the hotel later in the day. Our first stop was at a local beach for a coffee and chat to catch up on family news with brother in law J.


A short while later we were on our way to Caldeira Velha Park in Ribeira Grande, about 20km from Ponta Delgada.

I still remember when you could actually drive all the way to the hot pools, but now the park has been renovated, it looks amazing, has modern facilities like showers (albeit cold) and dressing cabins and is more environmental friendly too.

For an entry fee of 2Euro, you can swim in the bubbling hot thermal waters. At the top close to the mountain side is another pool  with a waterfall, but the water is cooler.

Take an old bathing suit and towels as the iron content in the water will stain them.
There are walking trails through the lush forest, and there is an Interpretation Centre explaining the island's volcanic formation.

Everyone I encountered from various nationalities was amazed with the pool, the hot waters, the park itself. We gave Lagoa do Fogo (Fire Lake) a miss as it was foggy and we wouldn't be able to see the view.
Nearby the Geothermal plant produces 42% of the island's electricity.

It was time to go for lunch, and we drove another 20km, to the town of Furnas, to eat the typical Cozido (meat stew) cooked in the hot spring waters, which had been ordered from the restaurant at the Camping place.

At the end of this post you'll find a Youtube video about how the Cozido is made in the Furnas. This way of cooking in the hot geothermal waters makes the food taste quite different, so if you ever visit the Azores islands, don't miss this experience.

After lunch we drove to the town's hot springs and walked around the park, tasted the sulphurous waters (tastes like rotten eggs or iron). The area is beautiful, green and peaceful.
The small pools of bubbling waters are now enclosed due to the danger of people falling into them. This is where the Cozido is "cooked" during a few hours. 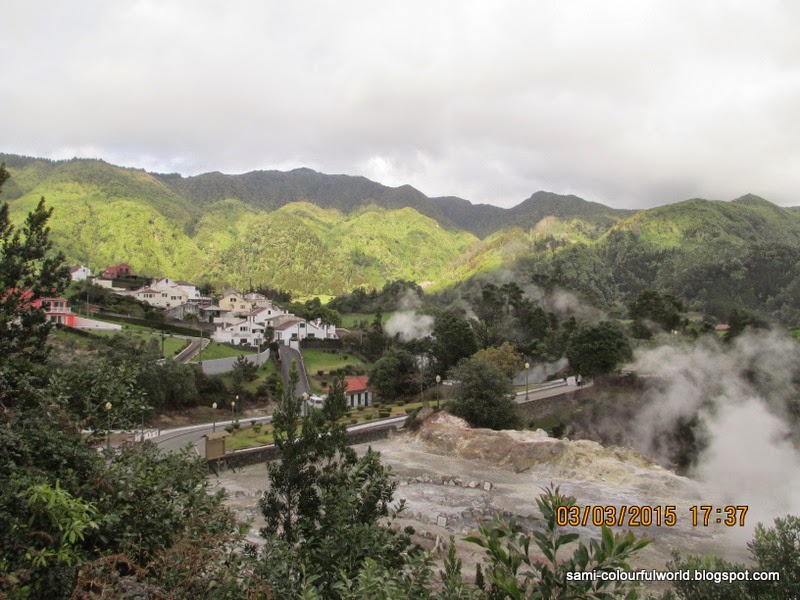 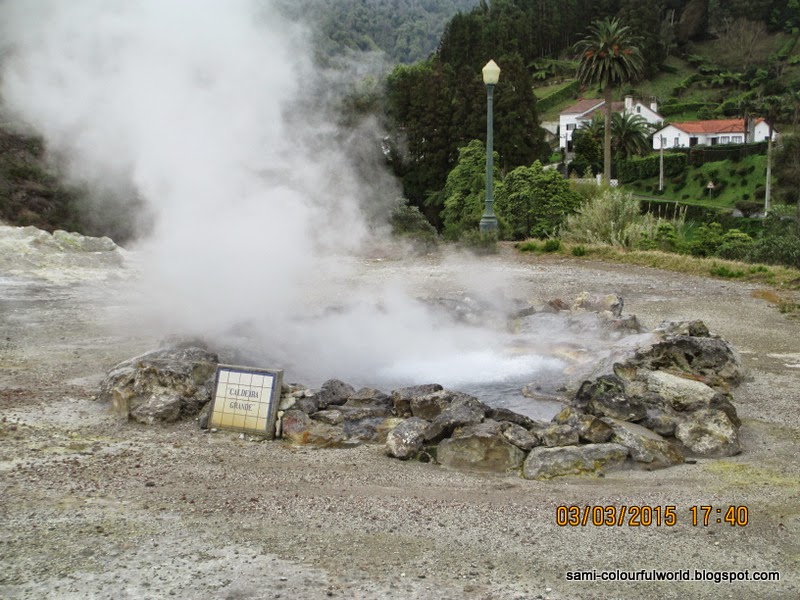 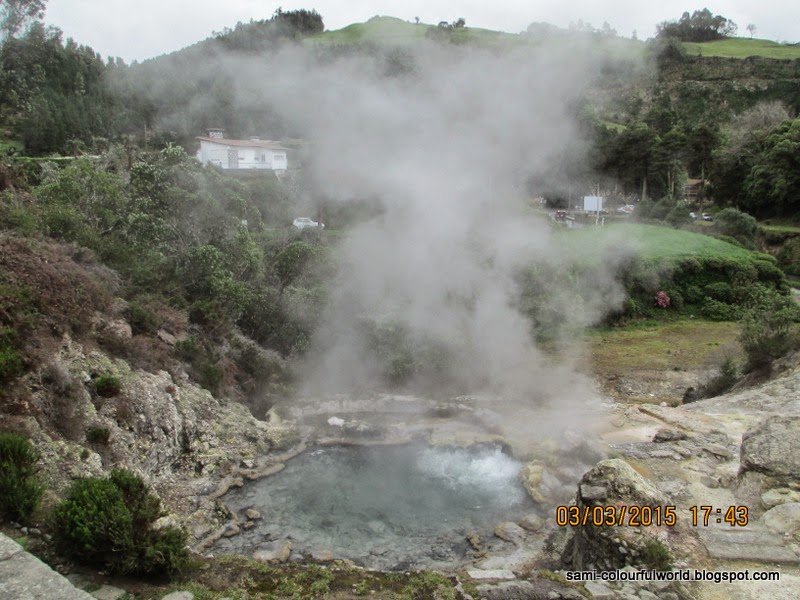 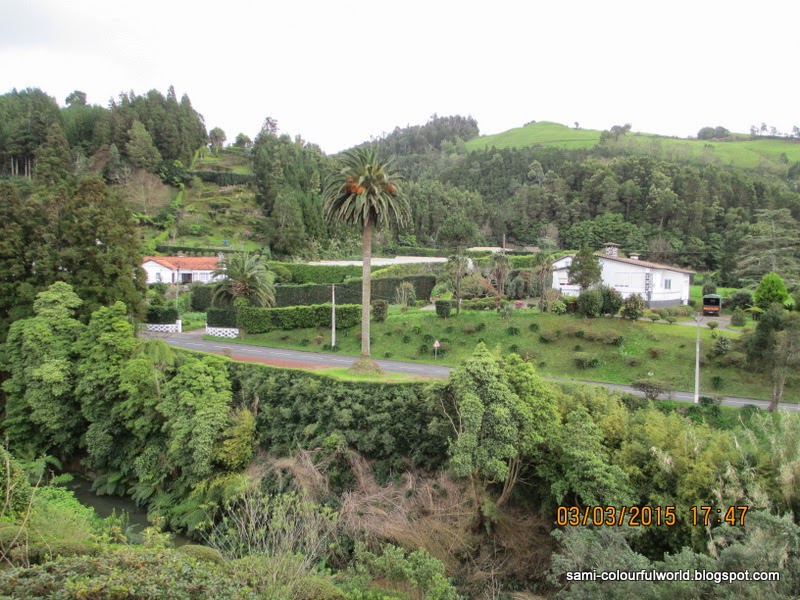 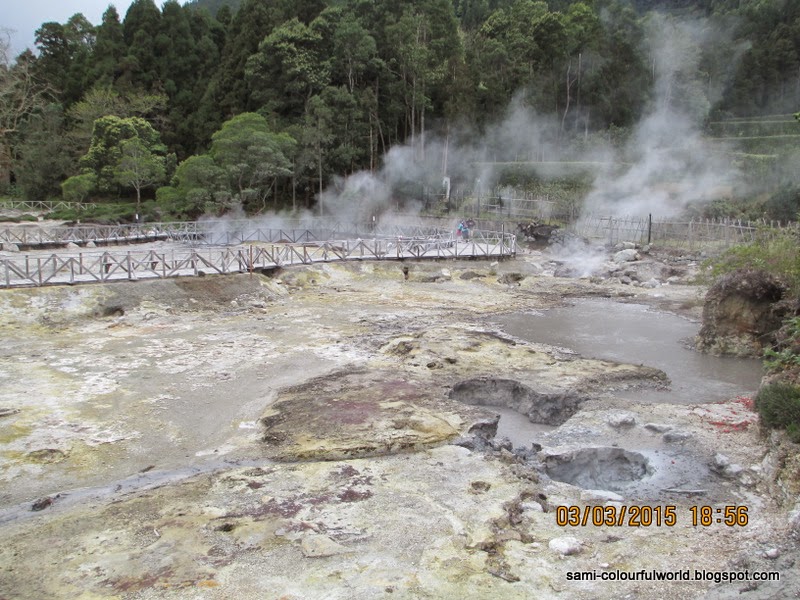 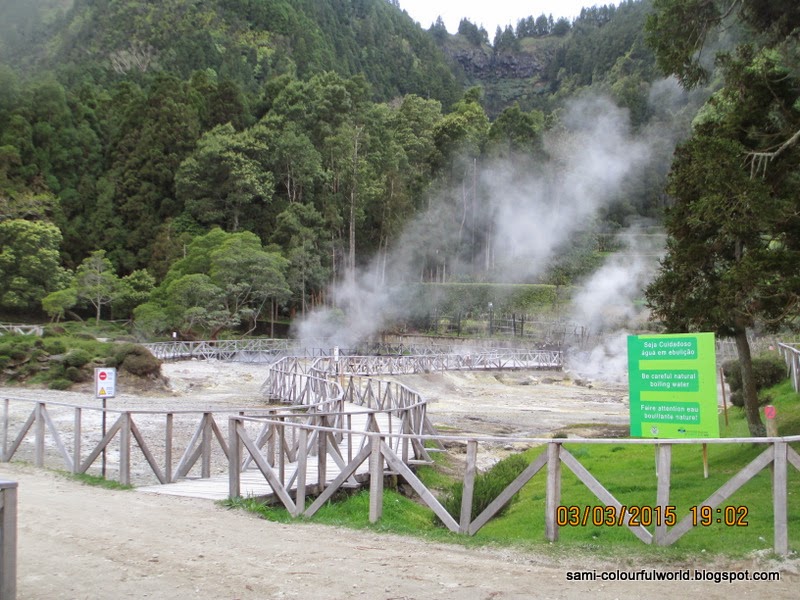 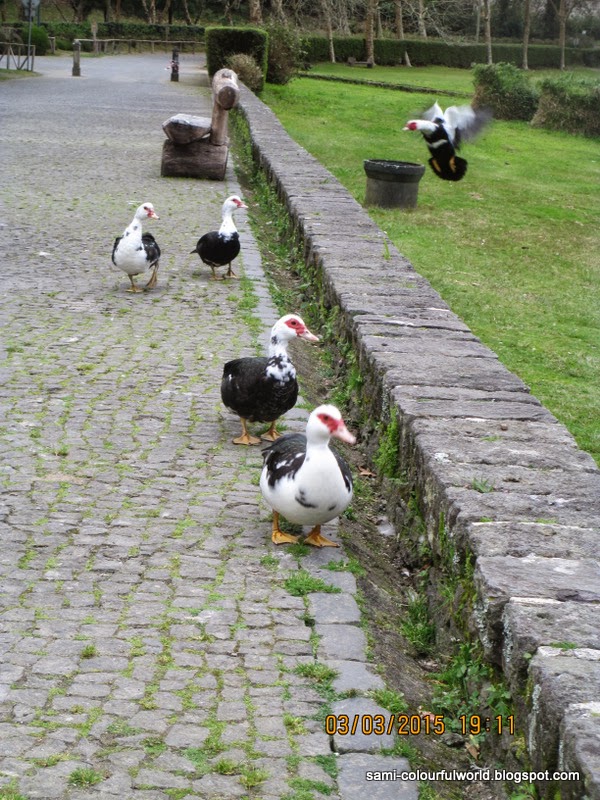 The area had a few stray cats all huddled around the warm earth. I read somewhere that they get fed by the council.

It was a day well spent, and we were exhausted by the end of the evening!
Time to rest to be fit for the next day.


Watch the youtube video about the Cozido, to see how it's made.

PS - I've noticed that all photos are dated 3rd March instead of 2nd, I had started using my husband's camera by this stage and must have programmed the wrong day.

Giethoorn - the village with no roads

In the rented car, the three of us set out to Giethoorn, 120km north east of Amsterdam, known as Venice of the North, or Dutch Venice.
On the way there through the A6 and A1  we came across a lot of fields full of wind turbines.


Giethoorn was founded in 1230 by Mediterraneans fleeing religious prosecution, and the name comes from the discovery of goat's horns (gietehorens) in the marshland, which were remnants of a 10th century flood.

The town became known after 1958, when a Dutch film director used the village in his comedy "Fanfare", turning it into a tourist attraction.

Nowadays there are about 2600 people living in the farmhouses from the 18th and 19th century which boarder the canals, and the only way to get around most of the village is by boat, bicycles and bridges that cross over the canals.

Being winter the tourists weren't there, the boats were packed away, and there was only a tour boat operating and a couple of private electric dinghies for hire either from the restaurants or from private people. The town has a couple of Museums, but we actually didn't get to visit them. There is also a holiday park with bungalows, which must be quite popular in Summer.


We started by having lunch at the first restaurant we came across - Rietstulp - and we loved the set lunch menu comprising of soup, meat and dessert for 17,50 Euros. The young man in charge of the restaurant was very knowledgeable about world affairs, languages, etc., and we enjoyed having a chat with him.

After lunch, we decided on a private boat ride and were indicated a house where we could hire a boat for 20Euros to ride during 1h following a set route on the map.

We had a great time, cruising the canals, looking at the beautiful thatched houses, the ducks and the birds...Magic!! 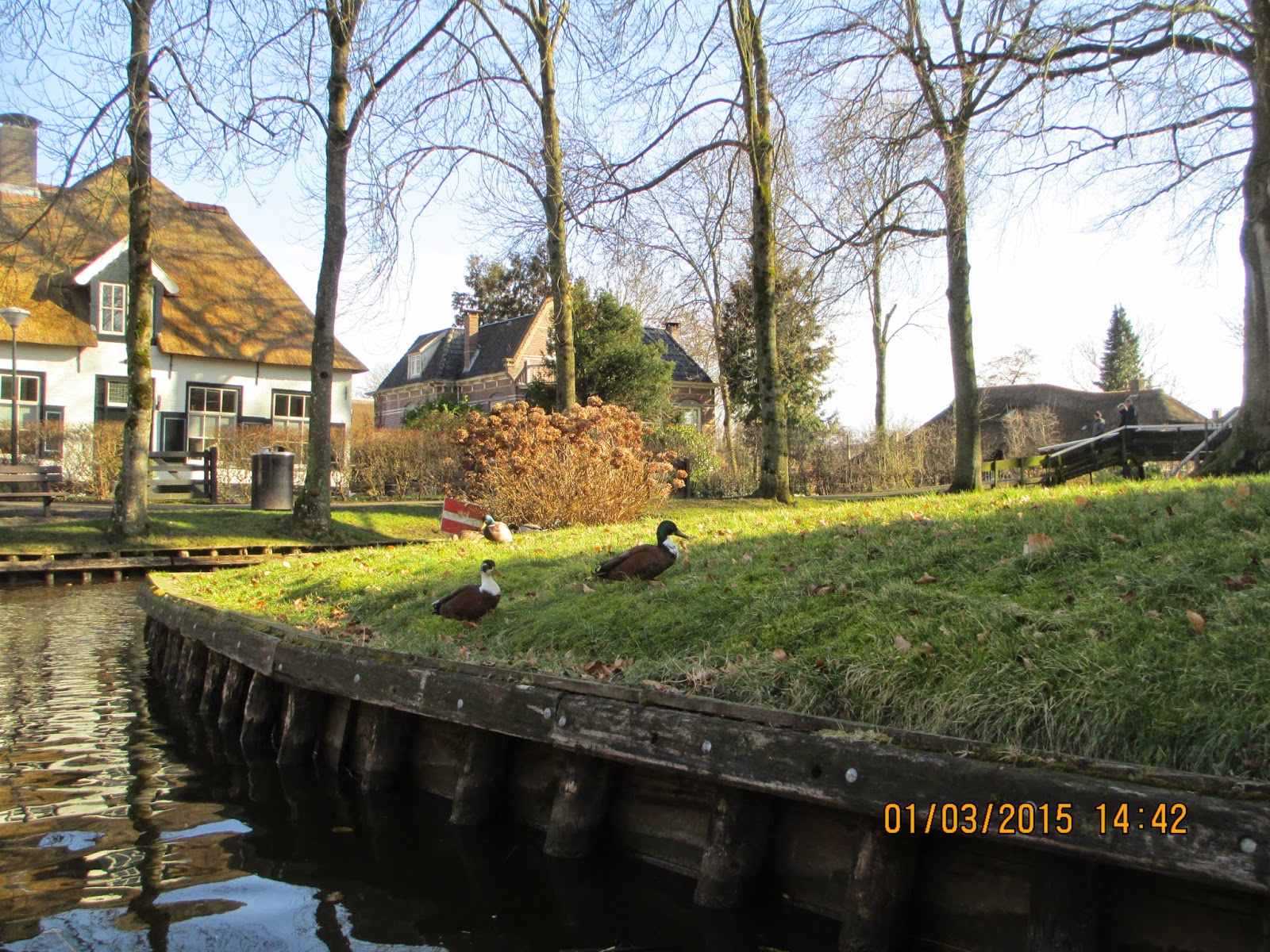 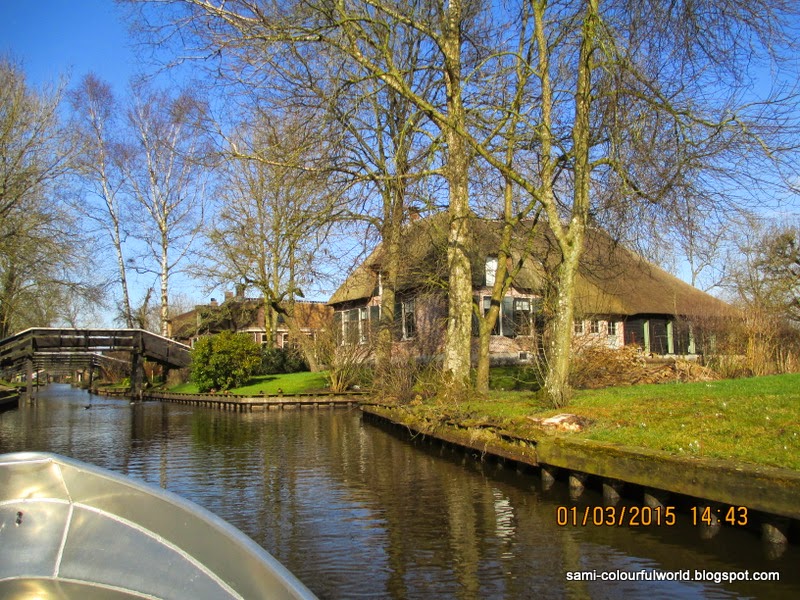 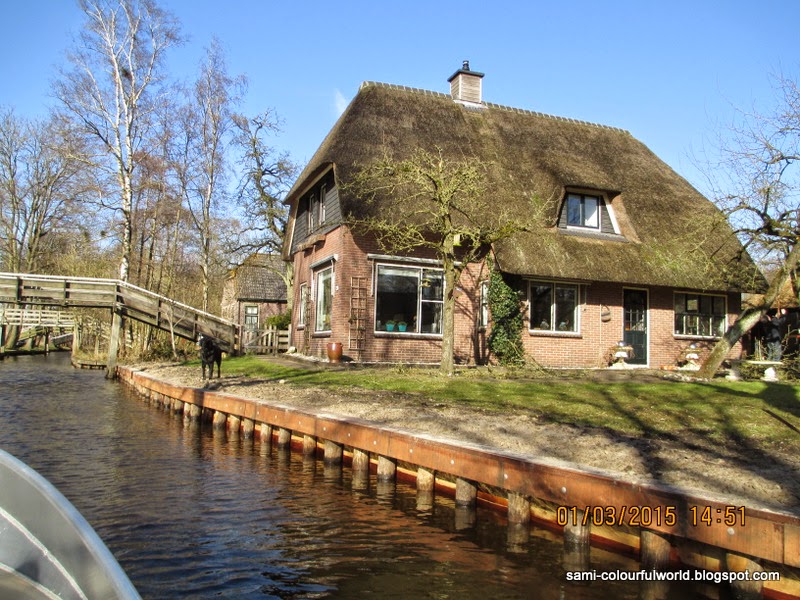 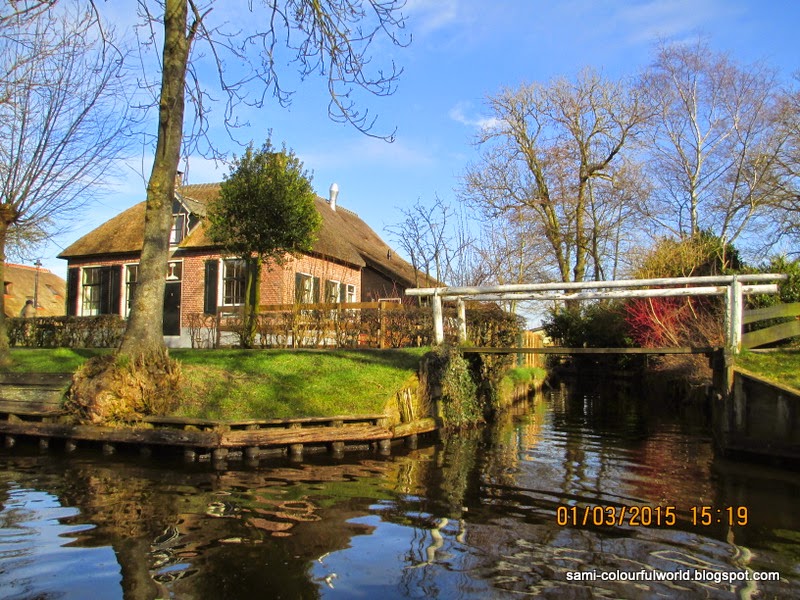 Email ThisBlogThis!Share to TwitterShare to FacebookShare to Pinterest
Labels: HOLLAND

We returned our bicycles to the hire shop, and caught the Nr. 10 tram which goes around the outer ring of the city. We got out at the Elandsgracht stop and walked the two blocks to the canal to visit the House Boat Museum (Woonbootmuseum) - The Hendrika Maria-  at Prinsengracht 296 in the Jordaan district.

Boats are an integral part of Amsterdam life, and the canals are full of these barges of various sizes, some even have gardens and garages can you believe that?
The museum was interesting to visit so we could get an idea what it's like to live inside, although this was an old boat previously used for cargo, so not the typical residential boat. 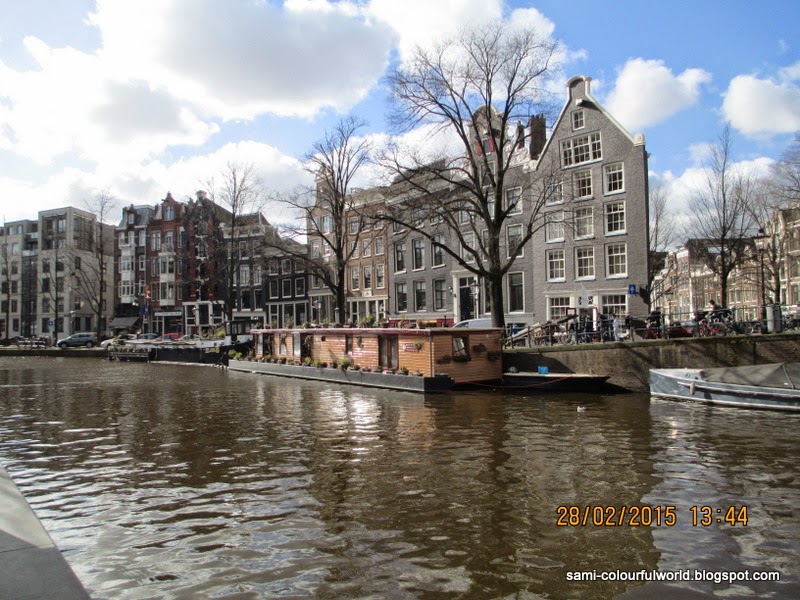 Entry fee to the museum is 4,50 euros, free to I'Amsterdam city card holders, the boat only opens certain days of the week, depending on the time of the year, so check their site.

I think you have to be super organized and have few possessions to be able to live in such confinement, so not for me!
Nowadays these boats are connected to the main electrical, water supply and even pay rates and taxes. What actually amazed me were crazy prices these boats fetch on the Real Estate market, some were more expensive than an apartment! 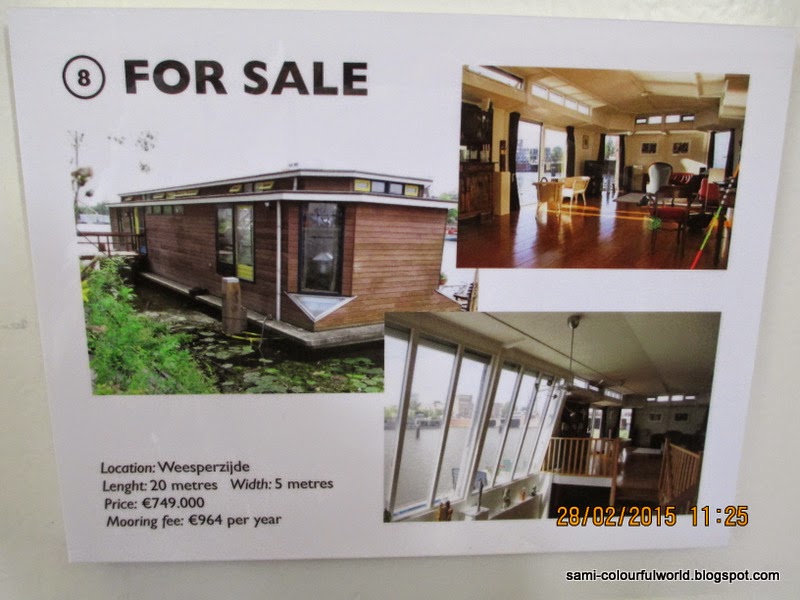 Just across from the Houseboat museum on the corner of Prinsengracht and Elandsgracht is a Square unofficially named - Johnny Jordaanplein. Johnny was a folk singer who lived in the Jordaan district, and upon his death money was raised to honour him with a statue (1991). Later the statues of 4 other musicians were added. We cross two canals towards the city to visit the Museum of the Canals (Het Grachtenhuis). This museum housed in a beautiful 17th century building that belonged to a wealthy merchant, at Hereengracht 386, brings to life in 40 minutes the story of the canals around the city, where trading has taken place, festivals are celebrated and life is lived inside the boats from 1600 until recent times.

Entry costs 12 Euros, free to City card holders, and the museum is opened from 10am to 5pm from Tuesday to Sunday and is worthwhile a visit! 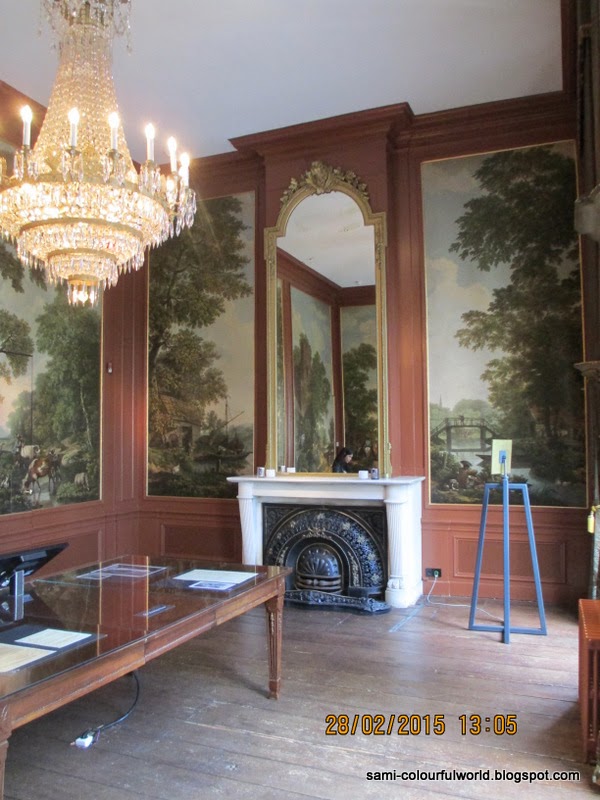 At this stage our daughter joined us and we walked back to Prinsengracht (where we had visited the house boat museum) as we would like to visit the Anne Frank House at nr. 263. Apparently you can buy tickets online and avoid the the huge queues, but we hadn't done that. The wait period was over an hour and a half and we decided we wouldn't wait and went to buy lunch from food caravans on the Westerkerk square, close to Anne Frank's house.
By the Westermarket, there is a memorial dedicated to Niek Engelschman, a Dutch actor, resistance fighter in WWII and a gay activist, who was born in Amsterdam in 1913 and died in 1988.

The monument honours all gay and lesbians subjected to persecution due to their homosexuality. 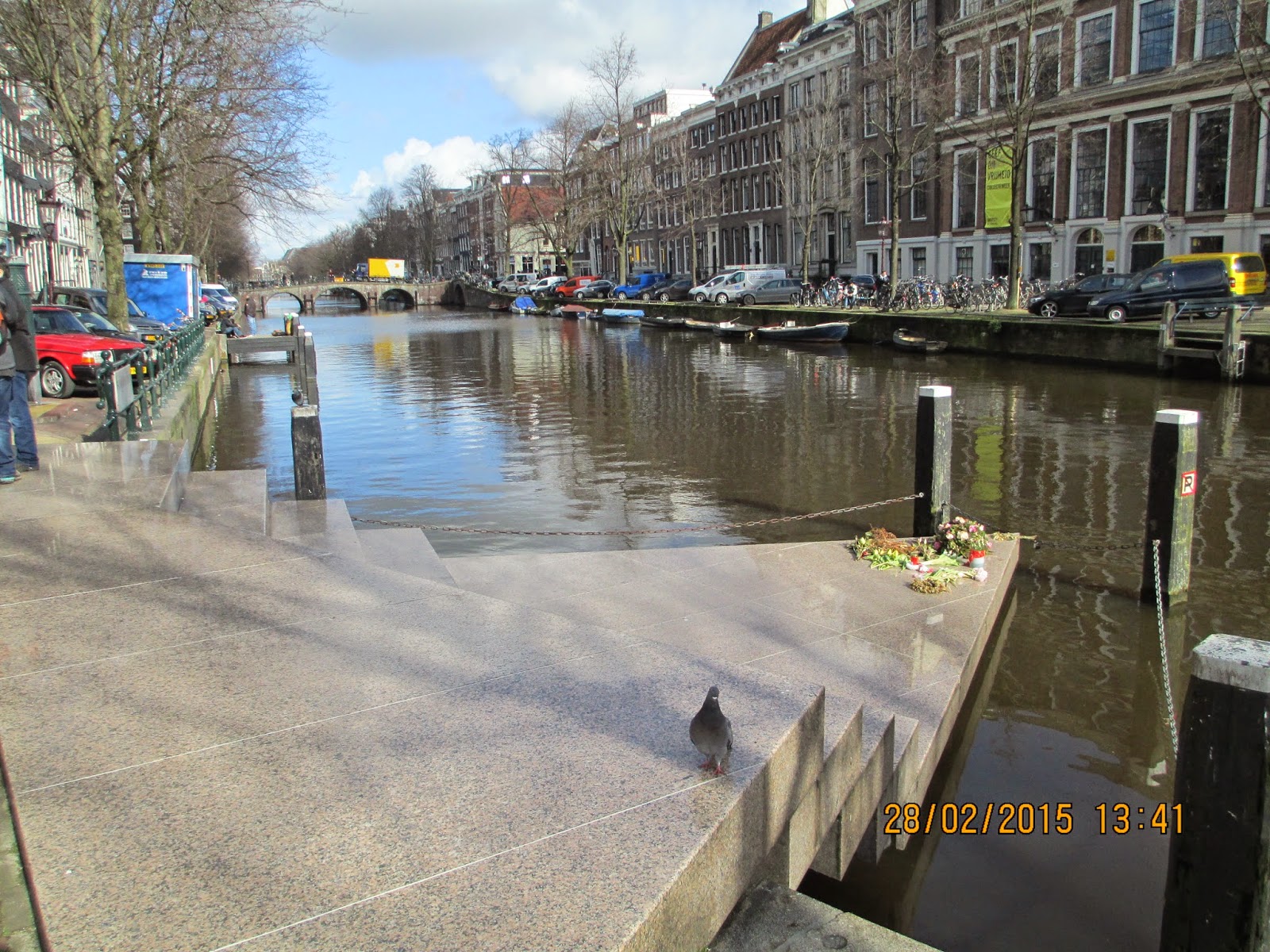 It was a sunny day and decided to walk for about 30min until Vondelpark, the largest park in Amsterdam which received 10 million visitors a year.
It's a lovely park with ponds, statues, kids play areas, etc and we found a lovely coffee shop and sat down with some drinks enjoying the sun and the birds.
This area also houses high-end shops and expensive old apartment buildings.

On the way there we went past a lovely square where hundreds of people enjoyed the sunshine at the outdoor cafes.

After our coffee break we walked to the Rijksmuseum nearby.
It's probably one of the most important museums and the most popular too, but my husband had enough of museums by now.
So we just went past to take photos of the "IAmsterdam" sign in front of the museum, which proved to be as popular as the Museum, with people jumping on the letters and doing all sorts of poses. We still took photos, but can hardly be seen among the crowd!

The museum opens daily from 9am to 5pm and entry costs 17,50 euros and the City card only gives you a 2,50 euro discount.
On the Museum Square (Museumplein) a man-made pond was transformed into an ice-rink and lots of kids were enjoying themselves.
From the Museum we walked south along the canal until we reached Holland's largest street market with 260 market stands -  the Albert Cuyp market in the Pijp District.
Here you can buy fruit and vegetables, flowers and other plants, cheese, fish, bread and cakes, fabrics, clothing, leather goods and jewellery.
We bought some strawberries and a packet of stroopwafel (syrup waffle) a typical Dutch biscuit. I couldn't help notice the fish was very good and well priced and the fruit was very cheap compared to our Australian prices.
It was time to go home, and while my husband and I caught the tram home, my daughter went to hire a rental car so that she could drive us to a lovely village the next day.

Later that night we went to dinner at Odessa Restaurant, housed in a boat which is moored on the canal just metres from my daughter's apartment building in Rietlandpark, in Amsterdam's east.
A lovely experience once again, and it was nice to know that the young owner is half-Portuguese, and actually spoke the language relatively well for someone who was born and bred in Amsterdam.