This beautiful and delicate lace pattern mural was painted on a wall in Perth's Chinatown.

It was painted during Form2015, by NeSpoon, a Polish street artist. She uses the lace patterns as "public jewellery" and usually collaborates with lace-makers in the various countries where she has exhibited her works, such as Portugal, France, Italy, the Netherlands... She also uses her lace patterns in pottery.

Click here to view other participants of the Monday Murals. 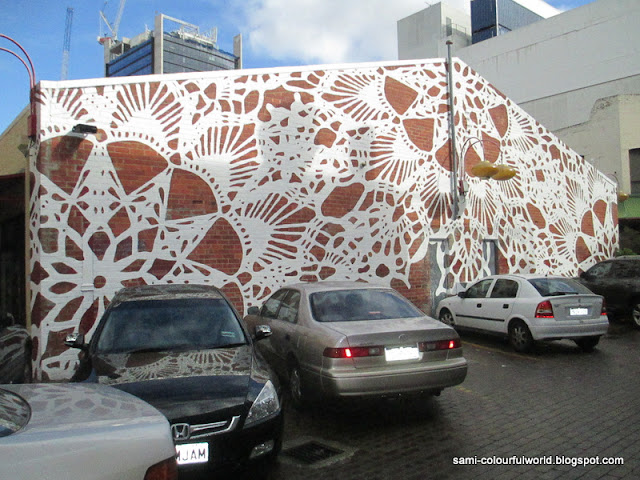 The birds and the famous face - Mural in Northbridge I

Just like the Zebra mural in the previous post, this 20 metre wide, 2 storeys high mural is in the suburb of Northbridge, right next to the city, and was painted by Perth artist Anya Brock. 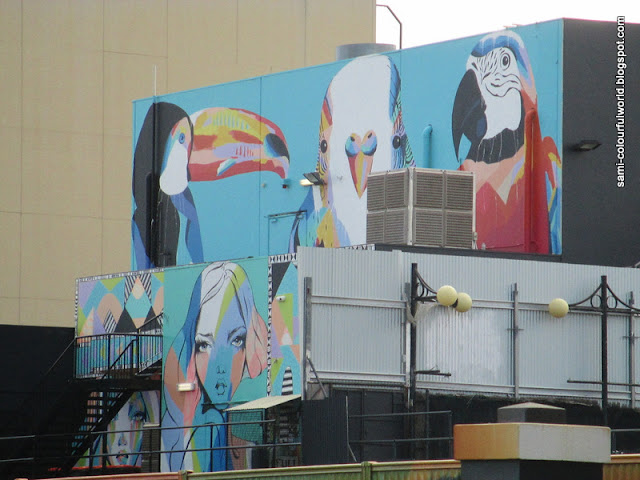 Anya was commissioned to paint the very plain rear facade of the Paramount nightclub, and again you can see recognize her style by the use of her traditional colours and also the birds and geometric shapes that she often paints.
The bottom left face is that of Australian supermodel Miranda Kerr.
If I painted murals these would be my colours too, in fact my favourite colour is blue, specially turquoise, which I have in the home, garden, clothing.... 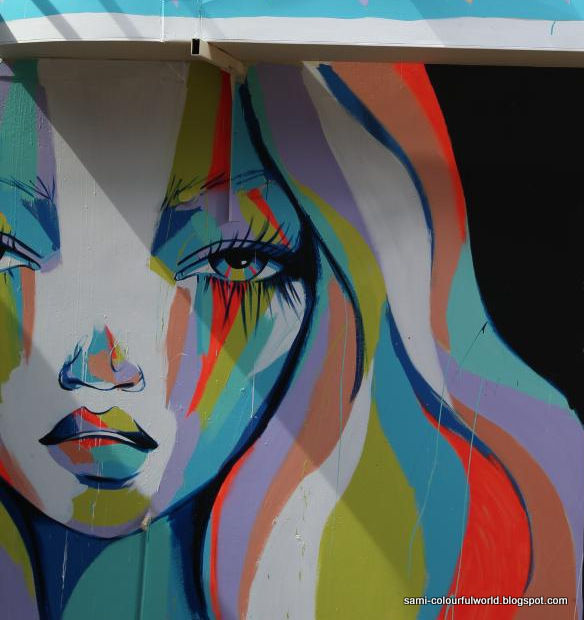 This Zebra mural in Fremantle  was painted by Perth artist Anya Brock in her trademark colours.
It was painted on the side wall of the very quirky Ootong and Lincoln Cafe, at 258 South Terrace.

Monday Murals is hosted by Oakland Daily Photo where you can visit other participating blogs.

A thousand lights at the Airport

It was completed towards the end of last year and it took 22 days to paint!
The mural is entitled "A thousand lights", depicting an abstract aerial view of flying across the globe to Perth.
The mural has been lit with LED lights so that the night view should be quite fabulous!

Check out more murals from around the world at this link. Enjoy! 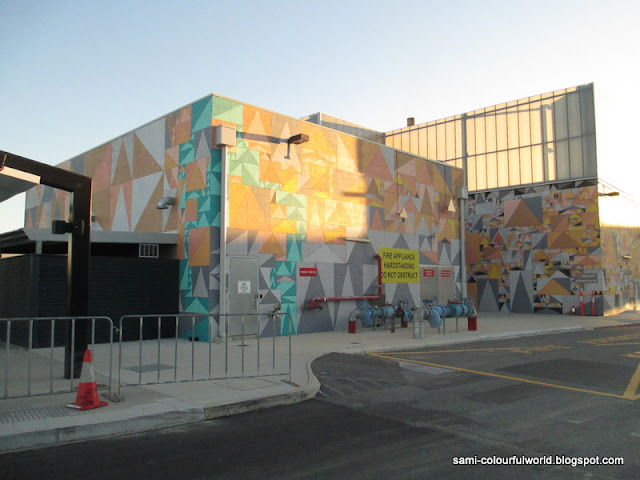 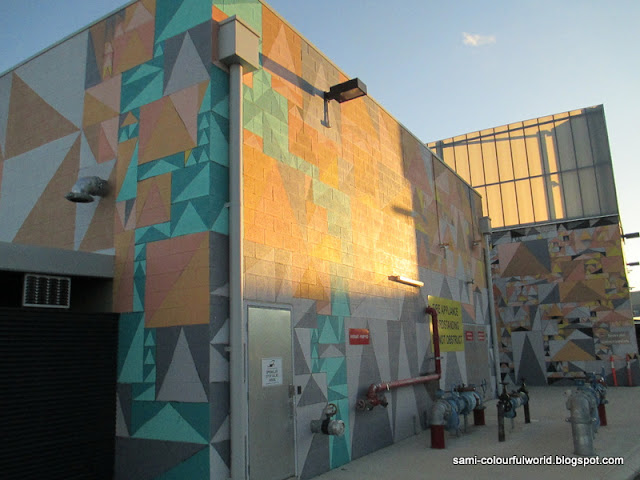 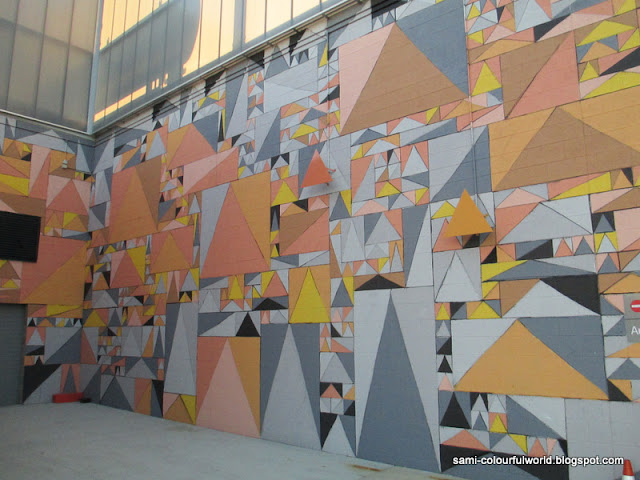 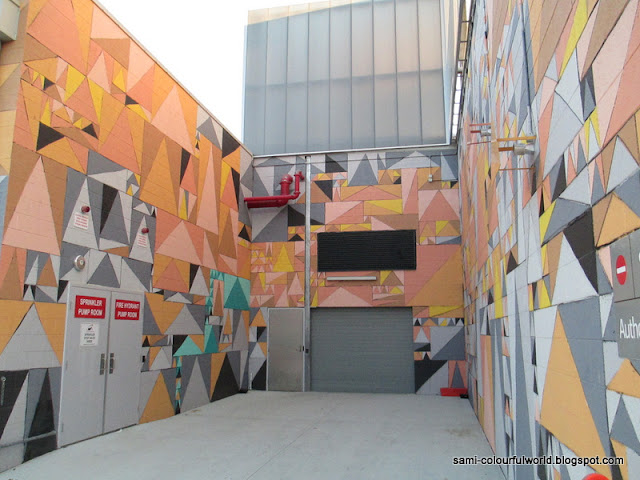 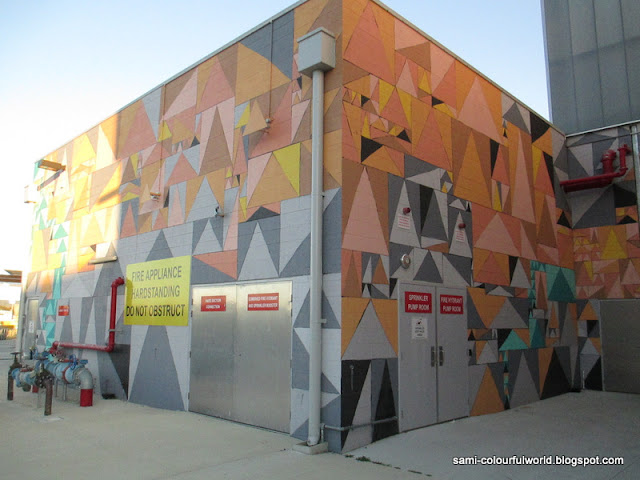 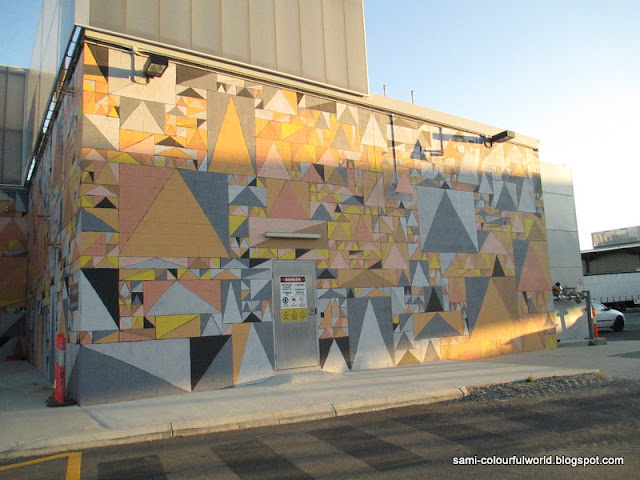 The following murals and street art were also found around the business area of Claremont - Claremont Quarter.

Located at Walt Drabble Lane (just like the first two murals in the previous post) the mural below was painted by Perth artist Kyle Hughes-Odgers, entitled "Taking boats out to the ocean" painted in 2012. 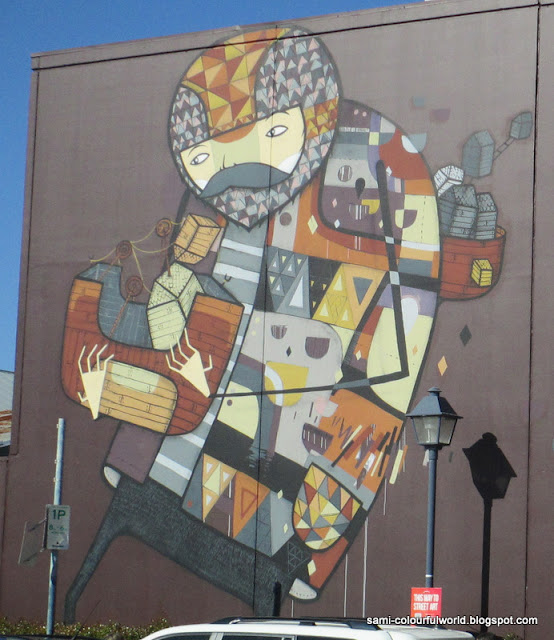 Dutch born and Fremantle resident, artist Amok Island, painted this "Fish" in 2013, on the walls of a men's shoe and clothing shop, at Rear 21 Bayview Terrace.
He seems to love  painting fish, as he has many other fish murals around Perth. 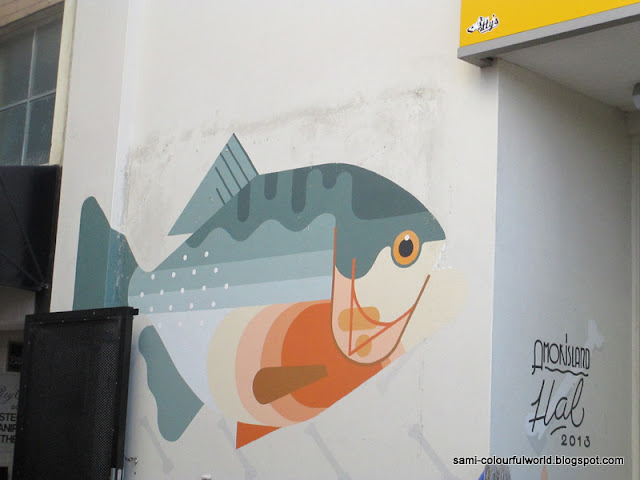 "Ooh La La" is the name of this work of art commissioned by the Town of Claremont to revitalise Bay View Terrace, reflecting the town's contribution to fashion.
It was unveiled in 2013 and the artist was Perth's Coral Lowry.


Another work of art commissioned by the City of Claremont in 2009, are these lovely bronze black cockatoos sitting on the bent flowering spike of a grass tree.
The sculpture was done by local sculptor Andrew Kay and is located in Mary Street.

After the exam I had some time before I had to go to work, so I went in search of murals painted for this year's Form 2015, in the nearby suburb of Claremont.

Situated just 9km from Perth's city centre, Claremont is one of the older suburbs with lovely old houses and very expensive modern houses too.
There are loads of interesting shops in the area as well... 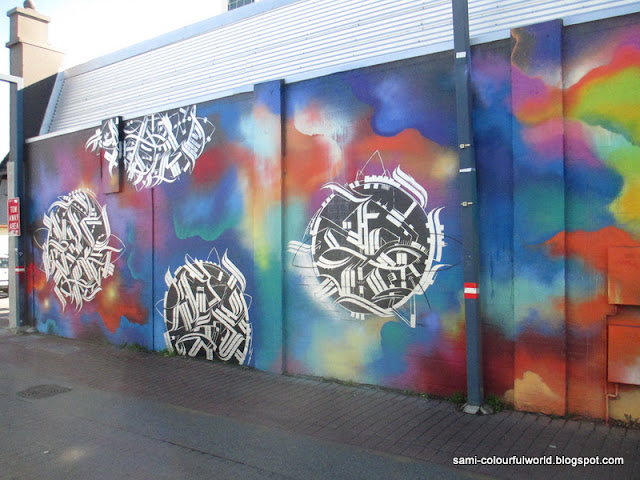 Painted by Australian graffiti artist "Kab101", this colourful wall is based on his trademark calligraphic signature markings. 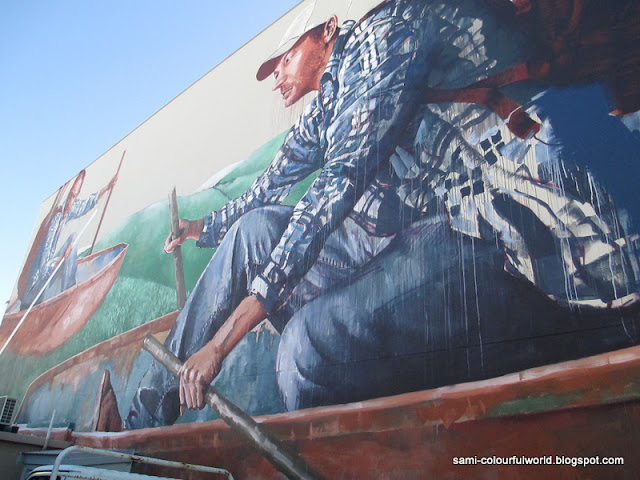 Perth artist Fintan Magee has painted another gigantic mural on the side wall of a 3 storey building.
Both of the above murals are to be found at Walt Drabble Lane in the Claremont Quarter. 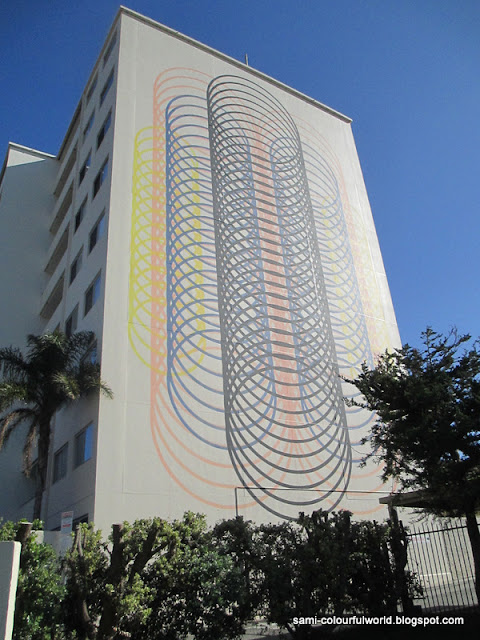 Painted on a high rise at 375 Stirling  Highway, this mural was painted by Italian artist Teo Pirisi aka "Moneyless" a lover of geometric shapes. 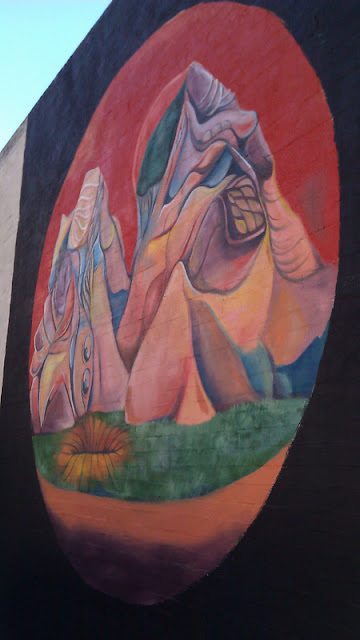 Painted on a wall behind McKenzie's auctioneers, at 8 Stirling Street, this mural is by Australian Hannah Atcheson who loves Japanese art and culture.

Fintan Magee's mural is my favourite, which is yours?

Winter evening in the city

We decided to go into the city last night, left our cars at the train station, took the 10 minute ride into town and walked a few blocks enjoying the wonderful "mild" (for winter) evening, until we reached Matsuri Japanese restaurant where we made reservations for dinner.
The food was good, but Japanese dessert was a bit of a let-down.

On the way back I took photos of some murals at the 140 Murray street building (just behind the Underground train station) where a few new restaurant venues have recently opened.

We then crossed into Northbridge (the night life district) via the Horse-shoe bridge to go and see the "Winter wonderland" - a snow dome, and a 250 m2 ice-skating rink that has been set up near the Perth Cultural Centre, running for part of the month of July.
Like last year, there was a pop-up bar with hot drinks, but unfortunately I saw some food vans around the area but they were closed, so I don't know if maybe they just operate during the day and not in the evenings.

I expected there would be more people in this area, but it was quite empty, but it could be because Fremantle also has their own "winter activities" at the same time, or maybe because it was a rainy day...
Since we don't often go out at night, it was an enjoyable and different night, and I think I managed to persuade my husband that we need to go out more often and discover new things in the city.

Hope you had a great weekend too.

Alfred at the Como cinema

Strangely enough, I don't think I had ever noticed this mural of the iconic Alfred Hitchcock which is painted on the side of the Cygnet Cinema car park in the suburb of Como, just a few minutes from my work place! 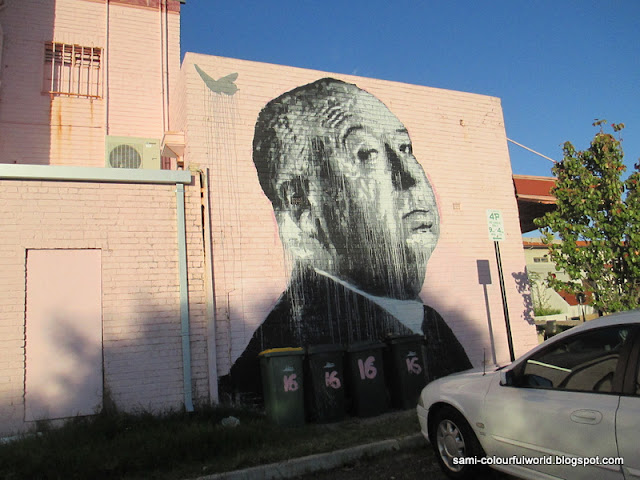 Recently I had lunch with a friend in a nearby restaurant, and it was when walking back to my car that I noticed the mural.
Alfred and his wife Alma spent part of their honeymoon in Lago di Como (Lake Como), Italy, and returned many times, and the suburb of Como was apparently named after this Italian locality.

The mural was commissioned by the Cygnet Cinema and painted in 2013 by an unknown artist.

The originally named Como Theatre designed in an Art Deco style, opened its doors in 1938 and is now heritage listed. Now named The Cygnet Cinema is part of the "Grand Cinemas" chain. 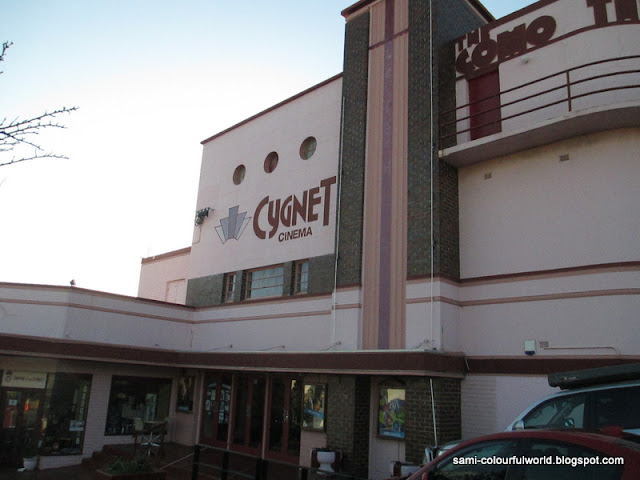 Just outside the cinema on Preston Street, stands this 2003 artwork by Peter Daily and Tunya Verlsuis, of old canisters and movie reels. It's an interactive artwork and you can turn the film in the projector to see historical and contemporary pictures of Como. How cool is that? 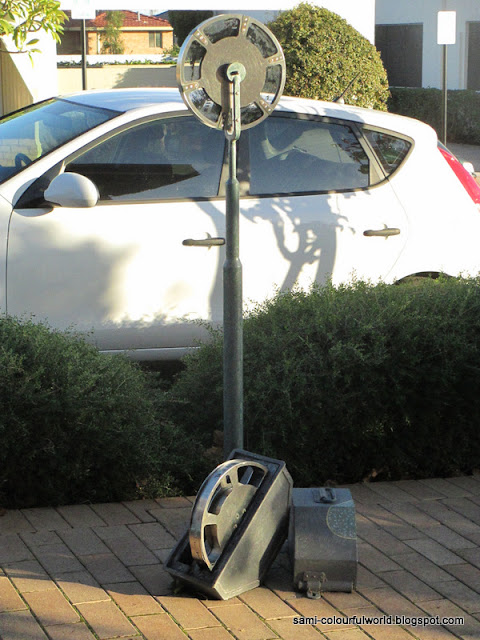 On another nearby wall of a Chinese restaurant another mural was being painted. The scaffolding and art material were there, but I couldn't see the artist.
Golden dragons and kids playing? Not sure I can figure out the association... 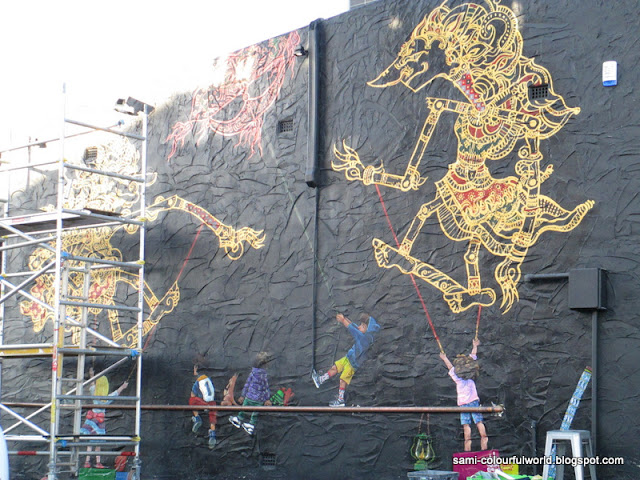 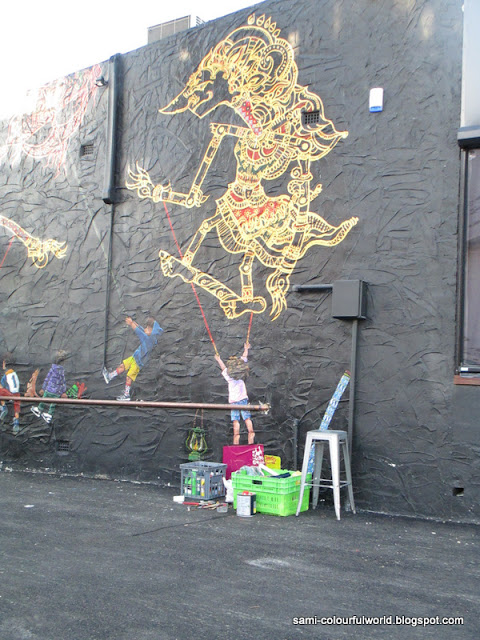 Have a wonderful weekend. We will be having a wet weekend in Perth.
Posted by Sami at 22:44 14 comments: