A to Z of Australia - I is for Islands (part II)

Western Australia whose capital is Perth (where I live), is the State with most islands, a total of 3747!
It would be hard to visit them all !!!


Just off the coast of Perth are the most known of WA´s islands -  Rottnest, Carnac, Garden and Penguin Islands. Apart from Garden Island where public is not allowed I have been lucky to visit the other 3. In this post I will talk about Rottnest and Carnac islands, and the next post will be about Garden Island and the cutest ... Penguin island.
Rottnest Island (or Rotto) is located about 18km off the coast, and it is 11km long and 4,5km wide, with a total land area of 19 square kms. The island has been a beloved holiday destination for Perth residents for over 50 years.
Private ownership of land is not allowed and the island is under the control of the Rottnest Island Authority. Revenue is collected from landing fees on all visitors to the island, boat moorings as well as managing rental accommodation.

The first Europeans known to land on the island were Dutch sailors from the "Waeckende Boey" in 1658, as a description of the island was in their journals, described as being dangerous for the ships due to the rocky reefs below the surface....
In 1696, the island was given the name "Rattenest" (rat´s nest), by Dutch captain Willem de Vlamingh, who spent 6 days exploring the island, and who described the island as "a paradise on earth".
Other explorers who stopped at the island were the French expedition of the "Naturaliste" and the "Geographe" in 1801, when they planted a flag and left a bottle with a letter, and the English Phillip Parker King in 1822 and Captain James Stirling in 1827.
In 1831, after the establishment of the British Swan River Colony at Fremantle, William Clarke and Robert Thomson received land grants on the island. Thomson moved in with his wife and seven children in 1837, developing pasture land for hay production and salt harvesting, which was exported to the mainland settlement.
In 1839 the island was converted into a prison camp for Aboriginals, used until 1931 (except for the period between 1849 to 1855). The "Quod" - as the prison was know is now used as tourist accommodation.
Around 3,700 Aboriginal men and boys were imprisoned there, and it is estimated there may be as many as 369 graves on the island, with 95% of the deaths being due to influenza.
In 1881, a Boys reformatory was opened in a building adjacent to the Quod, which included a workshop, kitchen, dormitories, school room and four small cells. The boys were taught carpentry, joinery and gardening.
In 1901, the facility closed and the 14 boys were transferred to an industrial school on the mainland.
During World War I  there was an internment camp that housed German and Austrian suspected enemies, and during World War II, it housed Italian enemy aliens. The facility was closed halfway through the war and its occupants sent to other internment and work camps on the mainland.

The island is an important bird area supporting the breeding of various birds such as the Fairy Terns, Banded Stilts and Wedge-tailed Shearwaters. The "Quokka" (the "rat" found by the Dutch) is the most prominent animal in the island and it has no predators. Some lizards, such as King´s skink, (also found on Penguin Island), frogs and Australian sea lions also inhabit the island.
From the 1900´s the island has been mainly used for tourism purposes with over half a million visitors a year, with an average of 330 thousand arriving by ferry or air taxi, coming for a day trip only, with December and January being the busiest months.


The ferry transport from Fremantle is quite expensive at around $100 per person return ticket. So make the most of your day by going early and returning on the last ferry at 4,30pm if you are just going for the day! (There are special´s sometimes...)


The main settlement is in "Thomson Bay" facing the mainland, and Geordie Bay and Longreach Bay on the north side of the island. All the bays are sheltered and suited for swimming and boating. Permanent boat mooring can be leased from the Rottnest Island Authority. The varied fish in its waters makes this a popular diving destination, especially for crayfish (check the maximum limits).


Accommodation in self-catering villas, units and cottages is available for up to 2850 visitors. Because of the high demand during summer, ballots are held annually for accommodation for the December-January and Easter school holiday periods.
Other options include the Youth Hostel, the Rottnest Hotel, Rottnest Lodge and camping sites.
Most of the up to 5000 daily visitors arrived by ferry from Fremantle, Perth or Hillary´s harbour.
Visits to the island´s shipwrecks can be made by glass bottomed boats, scuba or snorkel, and the first underwater interpretative trail in the Southern hemisphere is in Rottnest´s waters.
The island has a coffee shop, a few restaurants, a general store, bakery and liquor outlet, a sandwich shop and clothing stores.
Cars are not allowed in the island, but you can hire bicycles or take your own in the ferry, or take the island bus that  goes around the whole island and stops at the various bays.


Some of the events held in the island during the year are:
In March the annual "Rottnest Channel Swim", with swimmers crossing 19km from Cottesloe Beach (in the mainland) to the island.
In September the "Rottnest Short comedy and short film festival" showcases Western Australian short comedy films, stand-up comedians and musicians.
In October there is a Marathon and Fun run in the island, with participants able to run distances of 5km, 10km or marathon (42,2km).
In November, the island is a popular destination for the Year 12 leavers celebrating the end of their exams - "Leavers week" or "leavers", and the island is closed to the general public during this time, with identification and proof of being a secondary school leaver required to access the island).
In December the annual 1,6km "Swim thru Rottnest", is held between the Army Jetty and Natural Jetty.

Rottnest has few permanent residents, most of it´s workers commute from the mainland.
There is a barge that makes a return trip to Fremantle daily to deliver supplies and remove rubbish. Since 1995  a water desalination plant suppies the island with it´s water needs, which were previously supplied by rain water collected in tanks, and later supplemented by fresh underground water.
Power is supplied by diesel powered wind turbines, and there are two fully automated lighthouses to aid maritime traffic, plus an extensive network of flashing markers and transit beacons to indicate safe passage through the rocky entrances to the bays for smaller boats.


I have only been to Rottnest once since we moved to Australia, but I wouldn´t mind spending a short holiday there, as the island is very pretty, the waters are clear, and you get the feeling of being on holiday and relaxed when you are there. Pity that the ferry is so expensive!

Carnac Island, about 10km south west of Fremantle is a smaller nature reverse island.
In 1803, French explorer, Louis de Freycinet, captain of the Casuarina, named the island "Ile Pelée" (Bald island). In 1827 captain James Stirling changed it´s name to Carnac island, in honour of John Rivett Carnac, second Lieutenant on his ship HMS Success. The island was also used as a penal settlement for Indigenous Australians during the Swan River Colony, then as a whaling station and a quarantine station for the Port of Fremantle.
It is now becoming popular with commercial tour operators, as a tourism destination for nature lovers.
Here you can find Australian sea lions, who use the island during the non-breeding season. They are protected animals, as only a few thousand exist in Australia. Breeding is done on offshore islands 200km north of Perth for 4 or 5 months every 17,5 months, then the males migrate south probably to relieve feeding pressure from the females and young pups.
They look docile, but they are a wild animal that can become aggressive if they feel threatened. 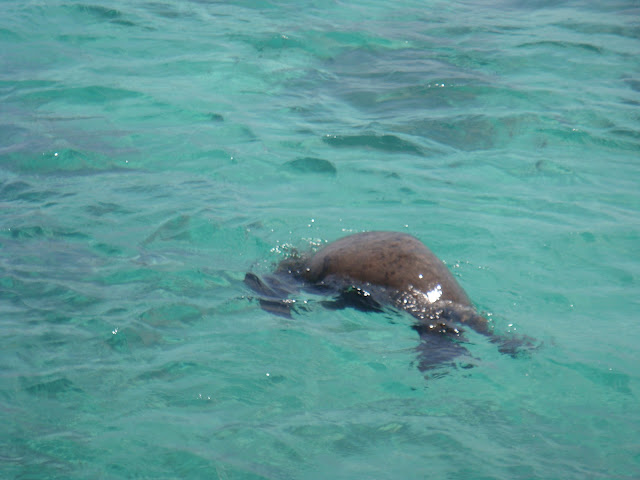 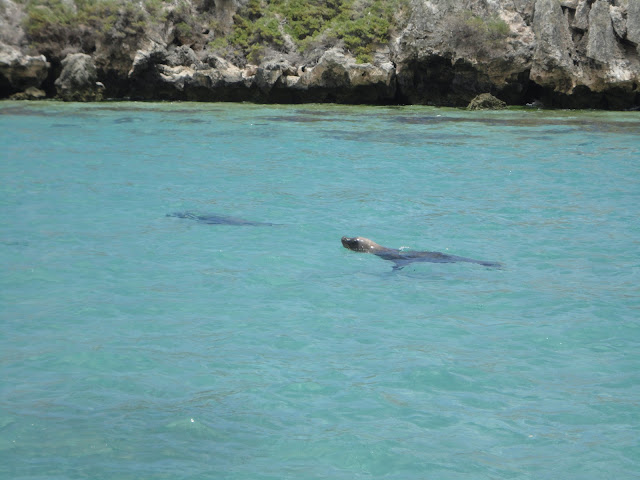 A lot of boat owners, divers and snorkelers go to Carnac island for the day,(you are not allowed to stay overnight) as it´s close enough and it´s free. Mostly people just drop their boat´s anchor and stay aboard eating, drinking and resting, others venture into the island to look at the sea lions or to snorkel or swim.
You are not allowed to venture further than the beach, as Carnac island has a large population of tiger snakes, one of the world´s deadliest snakes! They are important predators on the island eating seagull chicks, mice and lizards.


Carnac is also an important nesting habitat for several seabirds such as little penguins (never saw them there). bottle-nose dolphins (I have seen a couple there), wedge-tailed shearwaters, pied cormorants, bridled and crested terns...
Visitors are not allowed in the bird nesting areas to avoid disturbing the birds, if the adult birds leave their nests unprotected, tiger snakes or other predators could take their eggs.

There is no fresh water on the island and these species have adapted to the harsh island habitat.
I have been lucky to have been able to visit Carnac island a few times (never set foot on the beach though!), but that´s the perk of having friends with boats.
My next post will focus on Garden island and the small Penguin island that I recently visited!