The first half of September - Part II and some happy news

On a sunny day daughter Karina and I wondered what to do and decided to take the train into the city to go to Kings Park again. This time we managed to see a lot of flowers and some cheeky birds. 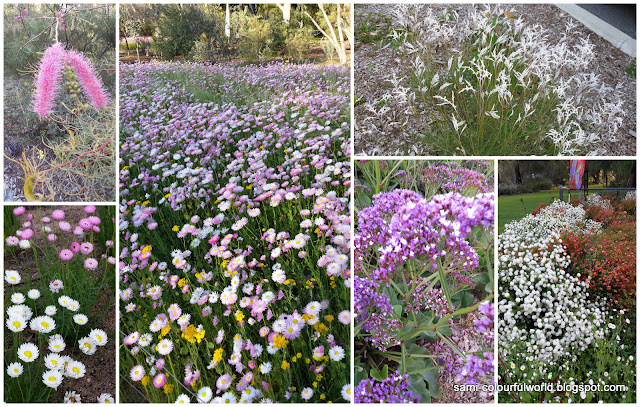 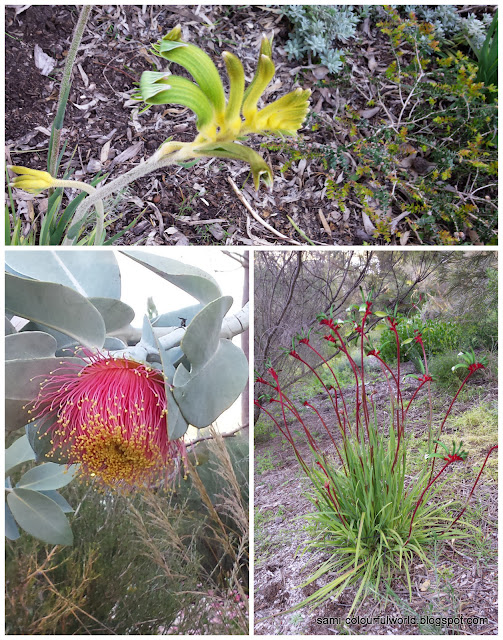 When we entered the glass bridge in Kings Park we saw two ravens posing for a photographer. When we approached they didn't fly away and stood there posing and "chatting to each other, or to us". When we reached the end of the bridge and looked back they were still there posing for another set of photographers. It was very funny 😊
On the boab tree there were two Rainbow Lorikeets standing inside a hole in the tree, but they flew away before I could take more photos.


On another day we drove to town of Kalamunda, located in the Darling Scarp on the eastern limits of the Perth metropolitan area. People usually refer to that area as the Perth Hills.
Kalamunda is a Noongar (aboriginal language) word meaning "a home in the forest". (kala=home, munda=forest).

I parked in a small shopping centre with murals on two of its walls 😉. After some photos for my Monday Murals we went inside searching for a coffee shop.
The Coffee Club was the only one available and we ordered coffee and hot chocolate (for me) and a slice of carrot cake.
Just across the road from the shopping is the local Kalamunda library where they have a fabulous 25 mt wide stained glass window, the largest in the Southern hemisphere, so after our coffee break we crossed the road to the library for some photos.

I wanted to drive to the Mundaring Weir (dam) and check the water level but the clouds were getting darker, so I took the scenic Zig Zag drive down the hill, from where I would eventually reach the freeway and home.
The Zig Zag drive is a 2,9km narrow one way road through the Gooseberry Hill National Park, between rocks and trees, steep falls and lots of hairpin turns, but starting at 450mt above sea level there are impressive views of the city, the airport, the forest area...

There are a few spots to park and take photos on the way down, but sadly because it was overcast the visibility to the city wasn't at its best, but we could see the airport area (to the right) and the airplanes landing and taking off.

And remember the shoe cupboard that I set up in my bedroom?
All the shoes went in, but because I squeezed 4 or 5 pairs per shelf, they don't have the neat and tidy showhouse look and looked a bit untidy to be left without doors...
I ordered some doors from Ikea to be delivered, and Karina helped me install them... I'm glad as I wouldn't be able to do this one on my own!  Bedroom is all sorted now!


When Jose was here the three of us also did some gardening in the narrow and long strip of garden in the small townhouse we have near Curtin University, that we rent out to a couple of students.
I had last pulled out weeds there before winter and the rains started. When I went past a few weeks ago I noticed how the strip of garden was covered in high weeds and the succulents I had planted there were now invisible!
But this was too big a job just for myself, so with Karina and Jose here it went much faster, even though we spent about 10 hours in total over 2 days pulling out weeks which filled two bins!
After weeding I took a lot of succulents and natives from our garden and planted them there.
Jose then went to get a trailer of mulch to spread over the area, which will hopefully deter the weeds and protect the plants from the Summer sun.
He also took a couple of cement pavers we had laying around in a corner of the garden, that were formerly where our patio is now, and put them near the water meter to make it easier for the water company to read the meter instead of having to trudge through the mini forest in that corner.
The neighbour from the townhouse behind ours saw us working in the garden, came to chat to us and said he now felt he had to do his little patch to match ours. His bit starts from the short bush, and you can see on the photos the green area of weeds (top right and middle bottom photo).


And so two weeks flew by, and Karina flew out to Manila via Hong Kong on the early hours of Monday. The flight was meant to depart Perth at 11pm Sunday 16th, but due to the typhoon in HK the flight was delayed to 2am Monday. Then instead of just 1 hour layover in Hong Kong, she had a 6 hour layover due to the airport having been closed for 24 hours and the huge amount of passengers and planes that had been retained there.
Because she's a frequent flyer she had access to the Airport lounge where she could eat, have wifi, and she even managed a shower and massage which left her refreshed for the next short leg of the trip to Manila.

And hopefully we'll see each other in December, this time on her side of the world.

And it's official!! We've known for a few weeks, but last week my daughter in law had her 12 week scan and the pregnancy was officially announced. Grandchild #2 will arrive beginning of April. I'm hoping for a girl this time 💟💟.