On Friday 26th January Australians celebrated Australia Day.
A bit controversial at the moment due to the Aboriginal community not agreeing that the day of the landing of the First Fleet should be celebrated, but this year it was still on.

We had a lunch booked with Portuguese friends who were being awarded citizenship that morning, but since it was only at 1,30pm we had plenty of time to roam the city and get a feeling for how the day was being celebrated in Sydney.

Once again we caught the bus from Middle Cove into the city and then walked to Circular Quay where the festivities were being held.

At 1 Bligh Street, in a modern office skyscraper this artwork dominated the entrance.
Titled "Day in, Day out" it was created by Perth artist James Angus, and those of you that know Perth or might have seen one of my posts about "Public art" might have seen a similar piece dubbed "The Cactus" that stands in Forrest Place.
And as you might have guessed the reason for the name is that instead of Sydney's colourful one, Perth's artwork is green! 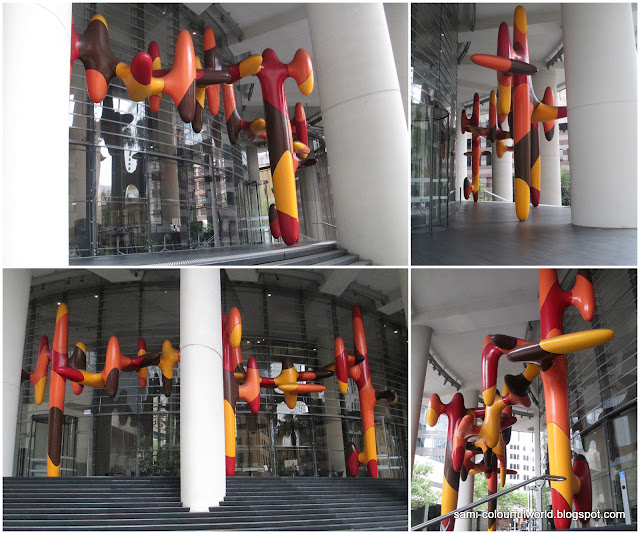 When we reached Circular Quay at 10am the celebrations were in full swing with musicians singing on a floating stage in the middle of the harbour, jet-skis dancing to music while someone on a water jet was doing acrobatics at the same time. We managed to get a spot and observed the goings-on for a while, taking photos and just feeling the happy vibe.


Everyone was trying to "book a good spot" for the evening show that would culminate with the fireworks at 9pm.  There would be music with some of Australia's best musicians, a boat regatta, ferry race, Aboriginal traditional song and dance performances, fly-over by jet planes, etc. The steps around the Opera House seemed to be a popular spot. 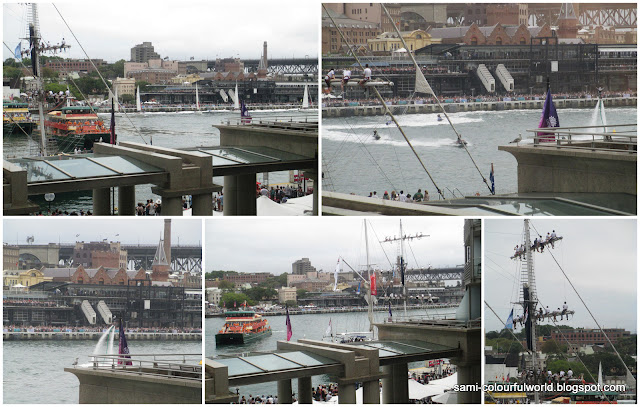 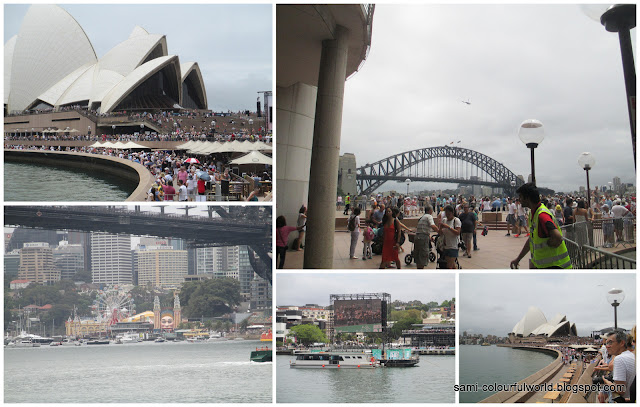 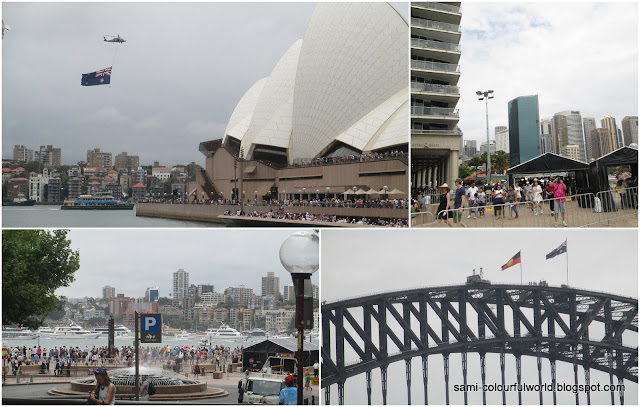 On our way down Macquarie Street leading to the quay we had noticed a lot of vintage double-decker buses and people getting on them, so we approached one of the buses and asked  about the the cost of the trip. We were told they were free but happy with donations.
They were advertising the Sydney Bus Museum, and just doing a round trip between the Opera House and Wynyard Station.

When we left we could get the train in Circular Quay, but because we wanted to ride the old buses we got in line and rode to Wynyard station where we caught the train to Marrickville to meet our friends for lunch.
Aren't they a beauty?

On arrival in Marrickville our "freshly appointed Australian citizens" friends picked us up from the station and drove us to Casa do Benfica (Benfica's House- Benfica being one of Portugal's biggest football teams).
A very unassuming club next to some tennis courts, they are now mainly a restaurant serving delicious and enormous portions of Portuguese food accompanied by Portuguese wines. Didn't take photos of the food, but you have to believe me that it was delicious.
My husband had already eaten there once and he had been impressed with the food!

With 8 people at our table - one American, one Palestinian and 6 Portuguese, we had a very long and enjoyable lunch celebrating our friends' citizenship. We arrived just after 1,30pm and left the restaurant close to 5pm!
Our friends drove us back to the station and we went back home to watch the Australian Day ceremonies and fireworks on TV.

And a lot of fun was had by all!