On my second day in Sydney, my husband and I took the bus into the city, alighted at the Wynyard station stop and walked a block to the Portuguese Consulate where we had an appointment booked to take care of some documentation.
After the paperwork was sorted we caught the train from Wynyard station into Petersham station.
Petersham is an inner west suburb of Sydney, considered the heart of Sydney's Portuguese community. Along Canterbury Road and Audley street are a few Portuguese businesses - mainly restaurants, a pastry shop, deli, butcher and bottle store.

We settled for lunch at Gloria's restaurant, my husband ordered the Feijoada (meat and bean stew) and I ordered the Carne de Porco a Alentejana (cubed pork, cubed fried potatoes, clams and coriander). My dish is quite a popular dish in Portugal and even though the combination of clams and meat may sound strange it's really nice.

We skipped dessert so that we could go to Belem Patisserie, for a pastry and an espresso coffee for my husband, but found it closed, just like another restaurant across the road (we were told the owners were on holidays). Luckily just a few shops down the road we came across a cafe/restaurant in an old movie house.
The Palacio enticed us with a small display of Pastel de Nata (Custard tarts) and a few other traditional cakes. They also sold Broa, a popular dark and crusty corn bread with a soft interior.
I don't usually eat bread but I can't resist a couple of slices of this one!

After a delicious bean tart for me (the ones to the left of top right photo) and a custard tart and coffee for my husband, we walked around looking at some of the shops before catching the train back into the city centre.
We even found a few stretches of cobbled pavement Portuguese style, how quaint!

In the city my husband went home to work and I met up with my friend B at Wynyard station. We then caught another train to Milson's Point, just 3km from the CBD on the North shore.
We walked up the hill towards the Mary MacKillop Museum and Church (should have got off at North Sydney station rather as it was much closer!).
Mary MacKillop was a nun who was born in Melbourne in 1842 and died in Sydney in 1909. She was a social reformer and educator mainly in South Australia, and was the first Australian saint of the Roman Catholic Church, canonized as Saint Mary of the Cross by Pope Benedict XVI in Vatican in 2010.

When we got there the Museum and Catholic Church were 20 minutes away from closing, so we peeped around the church and grounds and returned down to Lavender Bay to visit Wendy's Secret Garden.

Going down the road Sydney harbour and bridge come into view just before we reach Wendy's Secret Garden, which is always open and entry is free.

Wendy lives in family home, she and artist husband Brett Whiteley bought in the 1970's, located just above the garden. Even though they were divorced a few years before, when Brett died in 1992 at the age of 53, Wendy stricken with grief started to clear up the overgrown dump of unused railway land at the foot of their house. The land was owned by the New South Wales Rail corporation and they raised no objections to her beautifying the area, even helping with the removal of larger pieces of junk.
In 2001 her only child, daughter Arkie died at the age of 37, and she once again hurled herself into the daily garden work.
At the entrance by the Moreton fig tree is a bronze statue "Head" by Australian sculptor Joel Elenberg. Throughout the garden various other sculptures and quirky pieces like garden tools, wheel barrows, fountains, etc. There are also various tables and chairs in shady spots so you can sit down, relax, read a book, enjoy a bite to eat and just take in the beautiful surroundings.

Due to the size of the garden, Wendy who pays for the garden upkeep, has hired some help - Corrado, a Sicilian pizza chef who happened to be walking by, and Ruben, a Uruguayan house painter, and they have both became natural gardeners.
There are local volunteers coordinated via "lavenderbayprecinct@gmail.com" who gather in the garden on the first Saturday of each month.

As we exited the garden we spotted Wendy toiling away in the garden and we walked by to congratulate her on the amazing garden. At the age of 76 or 77 she is still a very active gardener.
What was formerly a wasteland is now a living work of art! 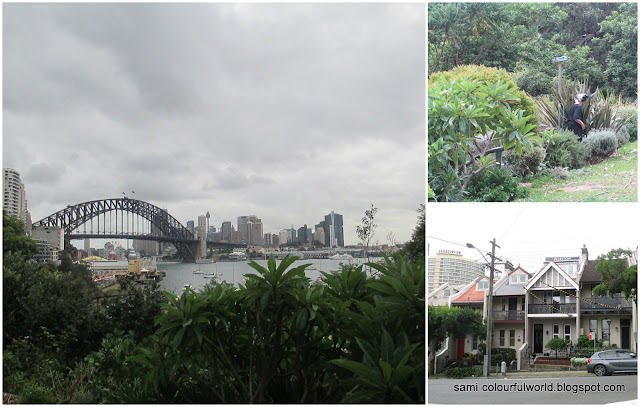 From the garden we walked to the Luna Park site close to the Harbour bridge.

Relocated from Glenelg in South Australia, the park opened in 1935 and run by experienced showmen. After 1970 the amusement park was run by businessmen and neglected. A fire in 1979 resulted in its closure. Since then it opened and closed a few times until the last reopening in 2004. Probably due to it being a week day afternoon there weren't that many people in the amusement park. 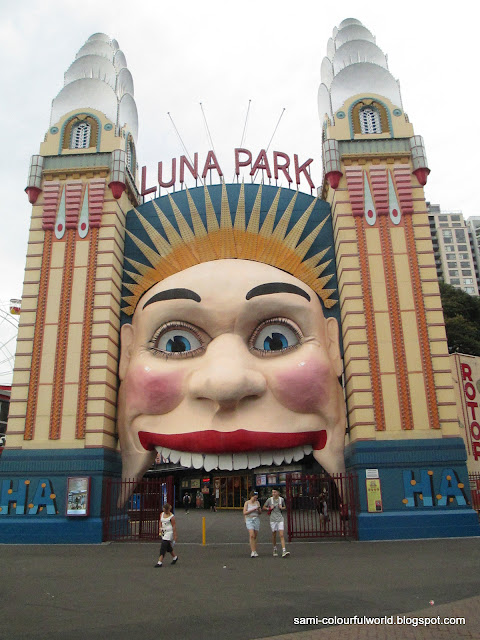 Plenty of opportunity for close up photos of the Harbour bridge and surroundings, and I even got a cruise ship sailing by. A few days ago Andrew from High Riser mentioned in the linked post the controversy regarding the Sydney ferry named Ferry McFerryface after a public competition. I wasn't aware of this name but took a photo of the ferry because I thought the name was quite funny.

Next to one of the harbour pillars stood a metal statue called "Australian Angel", by Bernard Luginbuhl from Switzerland. It was made in 2000 for the Sydney's Olympic and Paralympic games.

Made with discarded steel objects, the sculpture has an historic relationship with the location - Olympic rings are coils from an old locomotive, which rode in this area before the bridge was built. The anchors remind us about the important role of sea transport in the development of Australia, the six million rivets used in the construction of the harbour bridge are represented by the bent sheet metal with rivets from an old bridge in Switzerland. Spanners symbolise the trades and technical advancement and the cannon ball is testimony to the methods of imperial expansion. The flag indicates the Swiss original and the cross represents Christianity, and the national emblem of Switzerland since 1291.

It was getting late and my feet were tired so it was time to return to my husband's place with a train trip back from Milson's Point station to Wynyard station where I caught the bus to the Northern suburbs.  Around the station a lot of pigeons and Ibis were picking scraps from the grass.