For the next couple of days I stayed in Cascais spending time with my parents and sister.
One morning we took my sister's dog and drove the car 9km to Guincho beach, just outside Cascais and walked on the wooden walkways over the protected dunes of the Sintra-Cascais natural park.  Guincho beach is popular with surfers as it's always windy. Here were also shot some scenes for the 1969 James Bond film - "On Her Majesty's Secret Service".

At the start of the walkways is the Duna da Cresmina Interpretation Center and behind it there's a cafe, with 180 degree views of the beaches. When we returned from our walk we sat down and drank a juice before returning home. 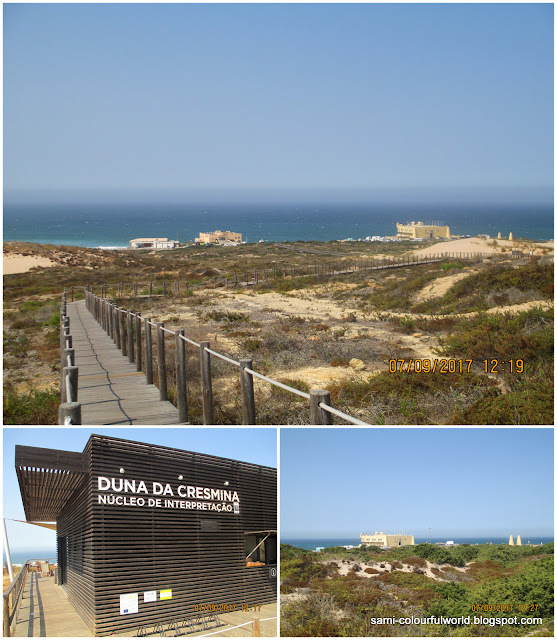 Towards the end of the day, when it wasn't so hot, my husband, daughter and I went to the main beach of Cascais - Praia da Conceição, just across from the town's centre. There was someone building a sand sculpture in one corner, and just outside the beach there was a huge sculpture of a red hand. Called "Middle Way" by Romanian artist Bogdan Rata, and is part of the project "Monuments in movement". 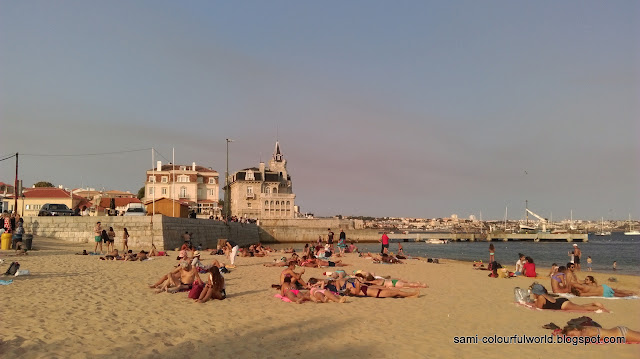 Cascais - the town and monuments

After dinner the whole family returned to Cascais to go an have an ice-cream at the popular Santinis, and to have a wander around the town center. 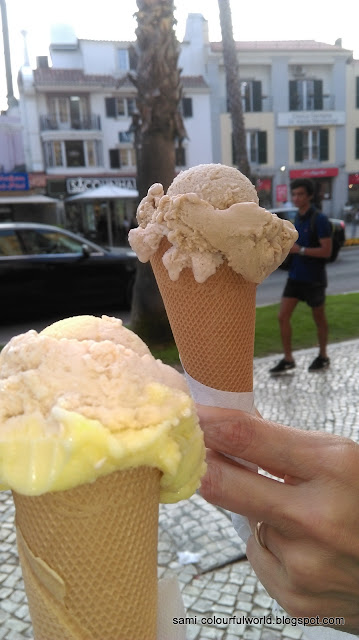 On Friday 8th September , two of the Doctors (plus a husband) that I work with in the medical clinic in Perth, arrived to spend 1 week in Lisbon. On the Saturday I met them at the railways station in Cascais and played "tour guide" for the day.

On the main street we enjoyed watching a busker dressed & painted in black from head to toe "pretending to sing" John Lennon songs. He was actually quite good and his money pot was filled to the brim.

We went into the Cascais Citadel, in Avenida Dom Carlos I,  a fortification built between the 15th and 17th centuries to defend the Cascais coastline and protect against attacks in Lisbon. The Citadel was the first area in Portugal to have outside street lighting installed in 1878.

In 1870 King Luis I terminated the military occupation of the fort and converted it into a lavish summer palace, where the Royal family would spend their holidays.  He died at the fort in 1889.

In 2012, a 5 star hotel Hotel with 126 rooms opened within it's walls - the Pestana Cidadela Cascais or Pousada Cascais with views over the Cascais Marina. There's a courtyard restaurant, bookshop, gallery, chapel and event spaces. There's also open art galeries and studios so that artists can work in front of the visitors.

You can also visit the Citadel Palace, which was restored in 2011, and managed by the Museum of the Republic Presidency, they have guided tours in English too.
We didn't get to visit it as the tour would start about 1h later and our time was limited.

On the way to Marechal Carmona Park we stopped at the Book fair just across from the park. Attendance was low, could have been because it had just opened that day, or because it had changed venues. We bought some English books that were being sold with discount. The book stands were interesting, with the back of them looking like book spines.
A parade of "VW Beetles" drove by, but I only managed to take a couple of photos.

Marechal Carmona Park is a real treat in the historic centre of Cascais - spacious lawns, a lake, kids library, and ducks, peacocks and chickens roam around the park. Within the park you can find the Palace of the Counts of Castro Guimaraes, and the tiny Chapel of Saint Sebastian.

The Saint Sebastian chapel opposite the Condes de Castro Guimaraes museum dates from the 17th century, 200 years before the Museum's construction. It's maintained by the Dominican priests who hold English mass on Sundays. Other religious services are held here and it's a popular venue for weddings and baptisms. In fact the day we visited there was a wedding being held there.

The Condes de Castro Guimaraes Museum built in the early 19th century comes complete with turrets and Arabic cloister with a fountain in the middle, and the interior is decorated with 17th century Indo-Portuguese cabinets, oriental carpets and 350 year old azulejos.
Once again we didn't visit inside (I was there last year), but it was near closing time.

Coming out on the Avenida Humberto II da Italia (Avenue of King Humberto II of Italy), we cross the road to take photos of the Santa Marta Lighthouse opened in 1868 and the lovely old mansions next to it.
This little bay is used by swimmers and sunbathers who lie on the rocks below the Santa Marta Esplanade (cafe).

King Umberto II was the last King of Italy, having gone into exile to Cascais in 1946 when the Republic was installed in Italy. He lived in Cascais for 37 years and was never allowed back in Italy. He died in  Geneva, Switzerland in 1983.

You can get a fabulous 360 degree view of the area above through this google maps link.

And there was so much more to show them, but it was 5pm and I had to call my brother in law to come and pick us up at this location and take us to my sister's apartment where we were holding a get-together with friends at around 5,30.
Luckily the rest of the family put things together for me, and my husband picked up a cake and Portuguese savoury specialities - prawn patties, samosas and meat patties that we had ordered from a friend's restaurant.

Once again we had a wonderful night of celebration of friendship with the last guests leaving close to midnight.

And you might enjoy this nice ballad about the "Bay of Cascais" sung by a band no longer in existence - Delfins - the drummer Jorge Quadros is my cousin.