Having arrived in Cascais from the northern city of Braga at around 7pm on Friday 1st September, we just had time to drop our luggage at my parent's house, refresh ourselves and shortly after my sister and brother in law picked us up.

We drove to Lisbon to meet up with a cousin and a couple of friends for dinner. After dinner the group of over 50's decided it would be a great idea to go to a disco!
I don't think I had been to a disco since...I can't even remember when, but this I was told was a disco for oldies with music from the 70's and 80's.

We certainly had a great night at Discoteca Plateau - they were also celebrating "white night" that weekend, and most people were dressed in white (not us), the music was great and we all danced along to Abba, Freddie Mercury, Boney M, Madonna, Elton John among others. You might not believe it but we left the disco at 3AM!!

Mercado da Vila Cascais (Village Market)
On the Saturday we had dinner at the Cascais Market.  The Municipal market in the heart of Cascais was reconverted in 2012, and apart from selling fish, vegetables, fruit and flowers from 8am to 2pm, there are now a lot of open-air restaurants and others under cover.   There are also shops selling crafts, drinks, health foods by weight, and every month the market hosts monthly themed markets presenting from chocolates to wine, sardines, cheese, chestnuts, etc.  We had a drink in the open air area while we waited for a table to become available in an upstairs restaurant, where we had "Tapas style" food (snacks) at Páteo do Petisco.

Ericeira
On Sunday we met up with my brother in law's parents for lunch at Dom Pedro restaurant in Ericeira.
Ericeira, a fishing town about 35km northwest of Lisbon or 40km from Cascais, is probably best know to surfing professionals for it's surfing beaches, and is now also very popular with tourists as a holiday place.
From one of Ericeira's beaches the last reigning monarch - Manuel II, and his mother, Queen Amelia (the widow of Carlos I) and others left the country into exile to England on the 5th of October 1910, when the monarchy was deposed by a coup, and the Portuguese Republic was established.
The restaurant named in honour of the penultimate King of Portugal - Carlos I (The Diplomat) who reigned from 1889 until his assassination in Lisbon, on the 1st February 1908 at the age of 55.
The restaurant had a beautiful buffet set out on a wooden boat with plenty of food from starters to desserts, and everything was great.
After lunch we drove to the beach area and the views were fantastic - to one side the Hotel Vila Gale, which is perched on top of the waves, with the village behind, and to the left the beach which is reached by a long walkway. 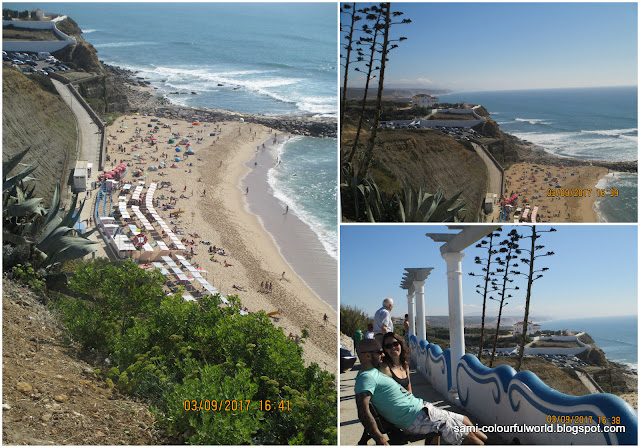 Ericeira beach down below

On the way back to Cascais we drove to another magical seaside village - Azenhas do Mar about 20kms south of Ericeira. Between the mountain and the Atlantic Ocean, this small town with white houses perched on the cliff has amazing views, protected beach and a sea water pool, and is quite popular with tourists year round.
The name means "Water mills" and you can see one of the old ones on the photo below.

We parked our car at the bottom of the village, and climbed the hundreds of steps to get the best view of the village. When we came down we ordered an ice-cream at the beach bar and sat down to enjoy the view and the sunshine.
The building by the sea pool has a restaurant on the first floor, and the bar is at beach level. They had live music too, giving the area a real beachy vibe. 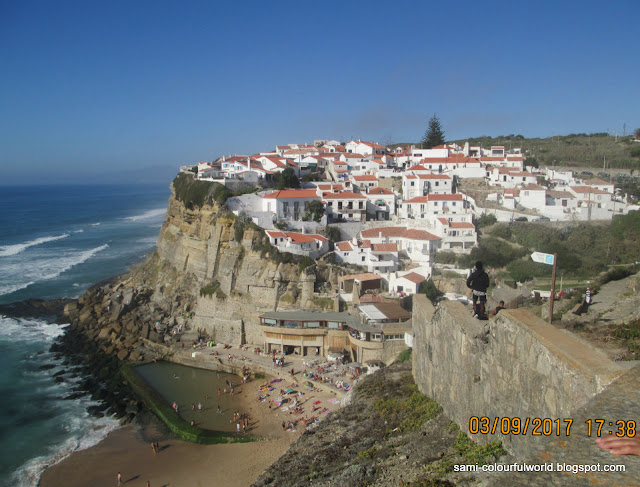 On on the road to Cascais we drove past these beautiful beach areas.

And then it was time to celebrate my son's and my husband's birthdays, on the 4th and 5th of September respectively.
We had two family dinners - a Chinese take away one night and a home cooked dinner the other night, topped with puddings and birthday cake of course.

My son, daughter in law and baby would fly back to Australia the following day, so the family was getting smaller again...

And just last week I saw this on my FB feed - apparently an unknown artist did this artwork overnight at the Azenhas do Mar beach (see my photo above) a couple of weeks ago. Isn't it just so pretty? Pity it wouldn't last last.

Next time we'll be visiting Cascais and Lisbon. Hope you enjoyed the awesome scenic beaches I showed above.