At work we started the month by interviewing a couple of people for a receptionist job at the Clinic.

A lady in her early 40's with the required experience was chosen, she started on Monday 9th, and after 1 week's training by myself she thought she was ready to go it on her own. We always work in pairs, so even though I thought she needed more training, she was bright and seemed to learn fast, so we accepted her request. Sadly she didn't last long... She resigned on the 31st due to wanting more hours, she thought the job was too stressful, wasn't too happy to take direction if she did something wrong...

On Friday 13th, we went to dinner at Two Fat Indians Restaurant at Carousel Shopping Centre. We like their food, but this time I ordered some "mild spicy" chicken dish, but their mild is far too hot for me!

My French class colleague Suzanne had asked me to paint this old chest of drawers. It belonged to her brother who died last year, and she wanted it to be fixed up and painted so she could give it to his partner. It was in a pretty bad state, with drawers that needed to be glued, the backboard was in pieces, there was a bit of damage to the top, no stoppers on most of the drawers, each drawer had about 10 holes on each side from various handles it might have had during it's life... 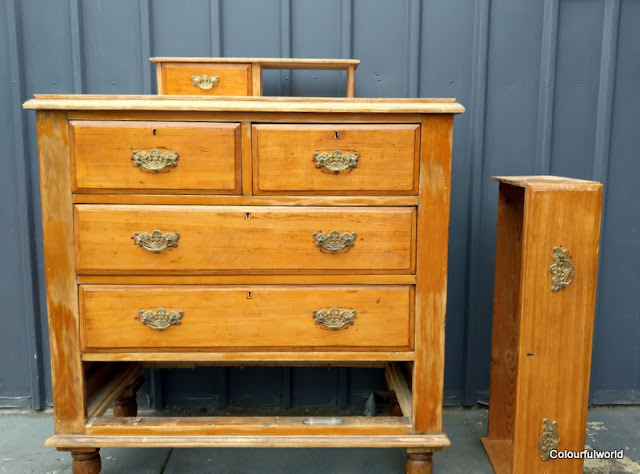 It took me many hours to repair it, sand and paint it to give it a masculine but modern look, using "Coal Black" by Fusion Mineral Paint, and an "Ash" wash on the drawers, covered by Cappuccino Stain and Finishing Oil, which helped disguise the various holes and  added new Cup drawer pulls. It got a new wood top stained in Cappuccino, and a new backing board.

When we delivered it to Suzanne on Saturday 14th, she was very happy with the new look and thought I hadn't asked for enough money for all the work I did, so gave me some extra, which was very kind of her. Hopefully it will now last a few more decades. 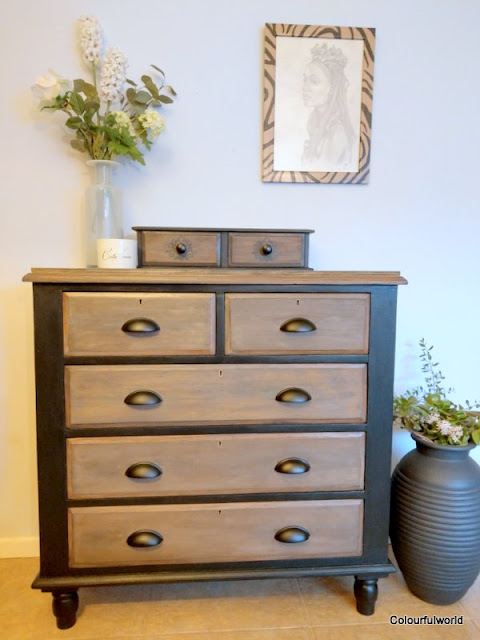 After delivering the chest of drawers, we then drove north of the river to have lunch with a young Portuguese family that we met here in Australia a few years ago.
Sunday 15th, with a temperature of 24C we spent the day in the garden doing the much needed job of weeding and repotting some plants. 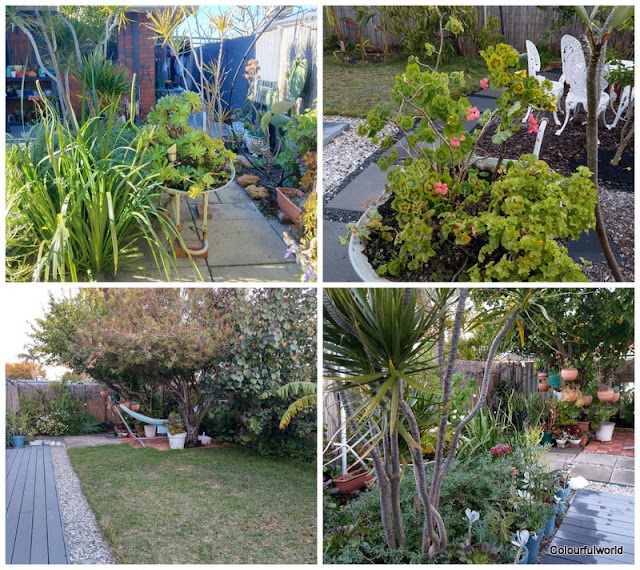 And we even had a light lunch in the garden...  Indian meat samosas (that I bought at the South African shop) served with coleslaw salad and a bowl of strawberries and cream with a dash of Port wine. 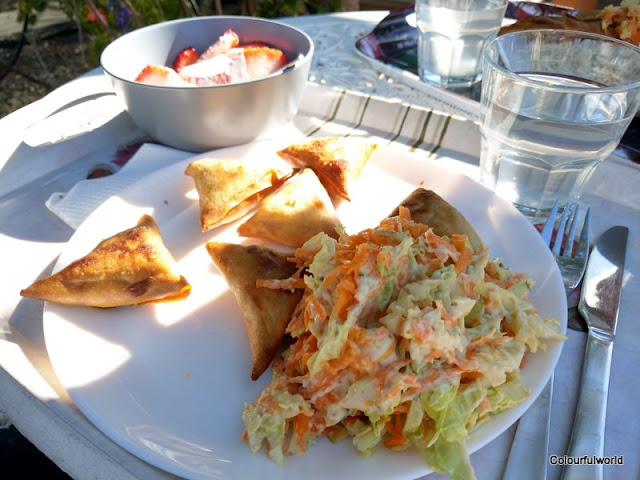 With the warmer weather the birds are more active in the garden and I managed to get a few (not so good) photos with my mobile.
On Friday 20th, Jose with a car full of colleagues picked me up to join them at a very posh Corporate event at Optus Stadium, called the "2021 Rugby Bledisloe Long Lunch" to help celebrate the upcoming game between the All Blacks and the Wallabies, match to be held on the 28th August.
Jose's bosses bought tickets for a table but then weren't able to attend and offered the tickets to some of the staff members and partners.

During lunch it was announced the All Blacks wouldn't be coming, but somehow a week later they came, and after quarantine the game went ahead on the 5th September.

There were prizes, auction of rugby items, speeches, rugby players, music, a three course meal and drinks... and it was also an great opportunity for me to visit the Stadium, which was inaugurated in December 2017, as I'd never been inside. 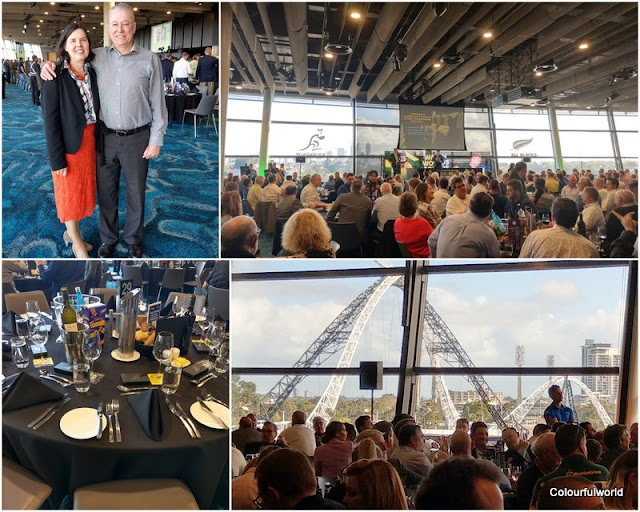 The starters - oysters and pork...at top, main dish was lamb, and as I don't like lamb I had to order the vegetarian Risotto. The small cakes were divine and so were the gourmet chocolates.
We even got ferried from the Stadium to the car park by a very friendly driver.
After lunch that finished at 4,30, we returned home changed into more casual clothes and drove to the city to watch the winter lights display. 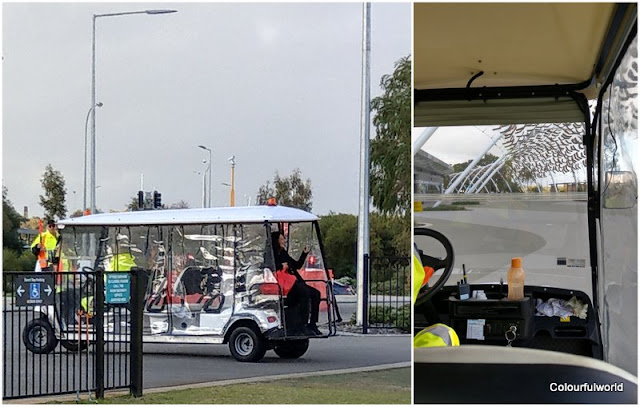 We stopped at Kings Park Botanic Gardens to get night photos of the city, and then to Brookfield Place in St George's Terrace for the lights. 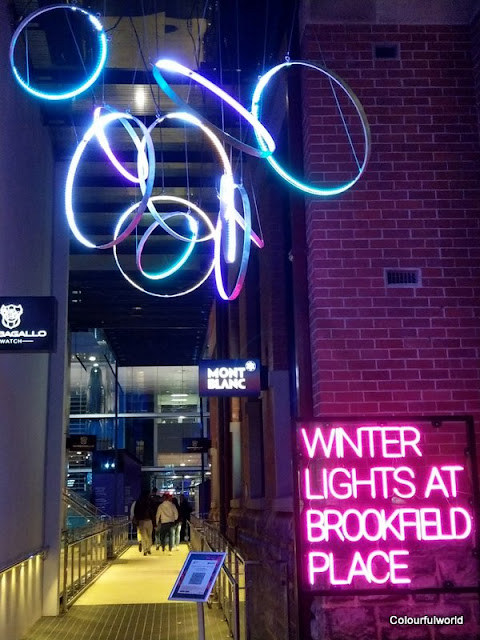 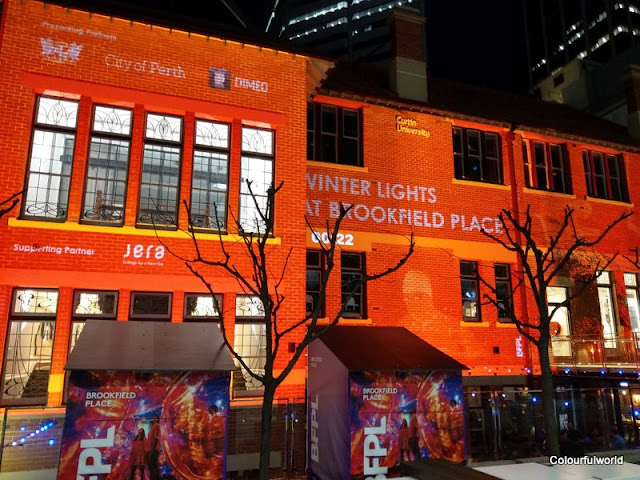 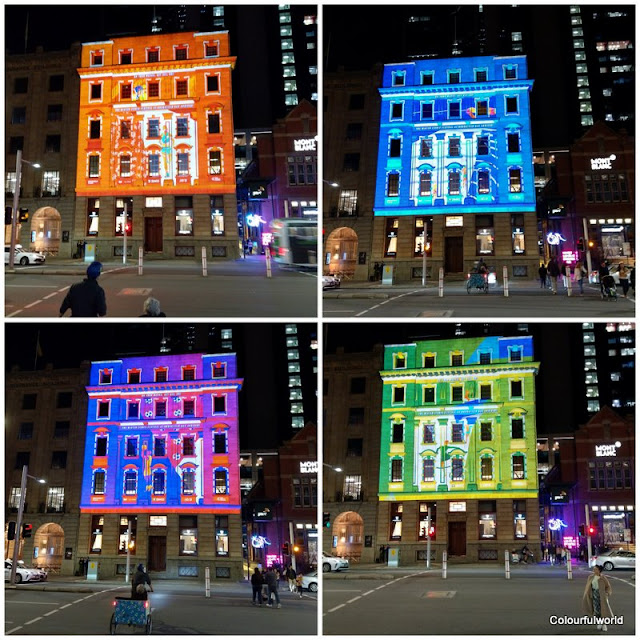 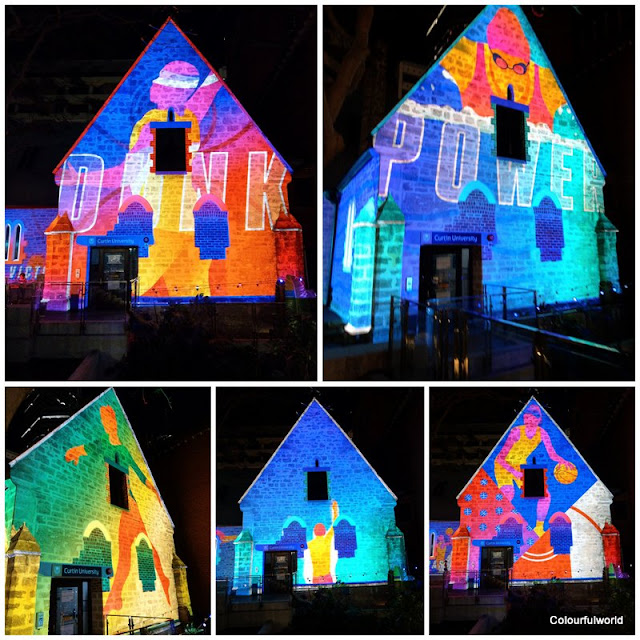 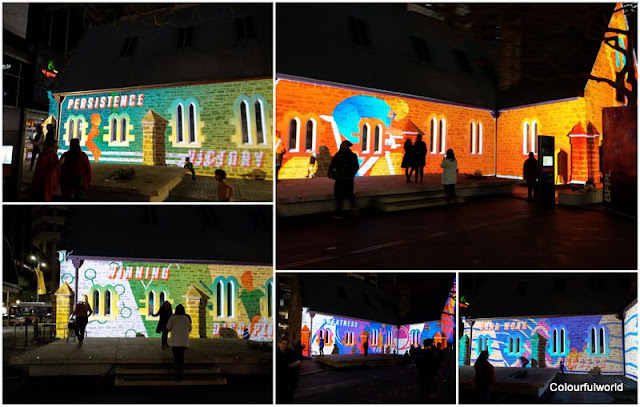 And the main attraction of the show were these huge balls 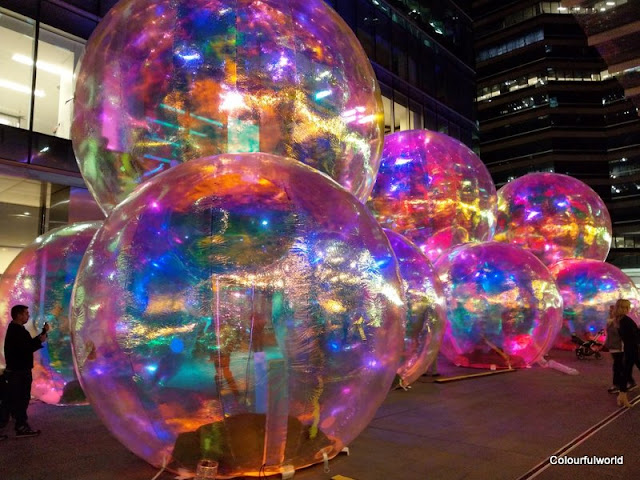 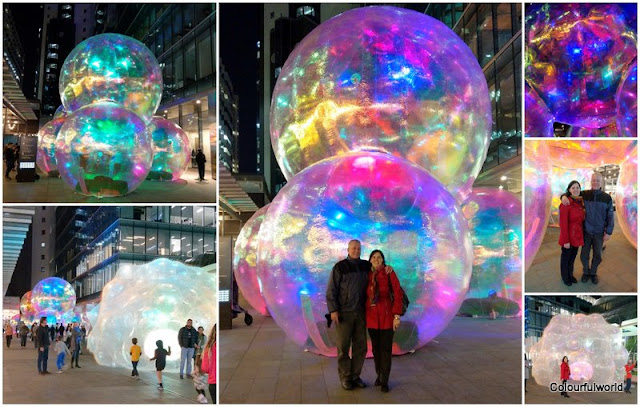 On Saturday 21st I joined a group of women I met through the Buy Nothing group in my neighbourhood and we went to Bloom - celebrating all women, multicultural unity and budding talent, held at the Canning Exhibition Centre.

The invitation asked for people to wear traditional costumes if possible, and I managed to borrow a genuine costume from the Island of Madeira from my friend Idalia. We had dinner, a fashion show, speeches, a display of Irish dancing and a Belly dancer and there were some stalls with products for sale. 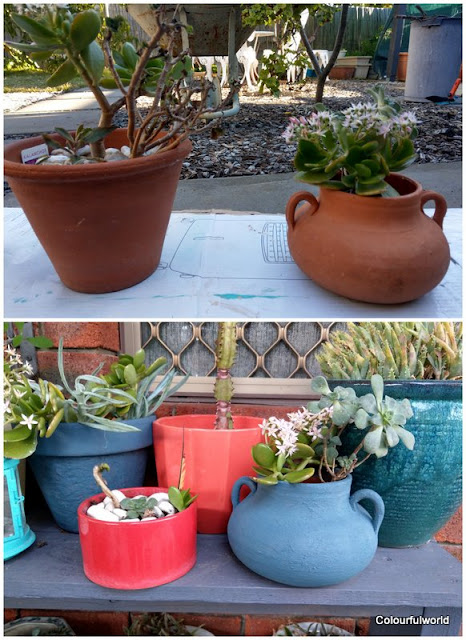 A dolls rocking crib that I bought at an Op-Shop for $8, now painted in a soft pink. I've even  sews a little mattress, sheet and mini pillow. 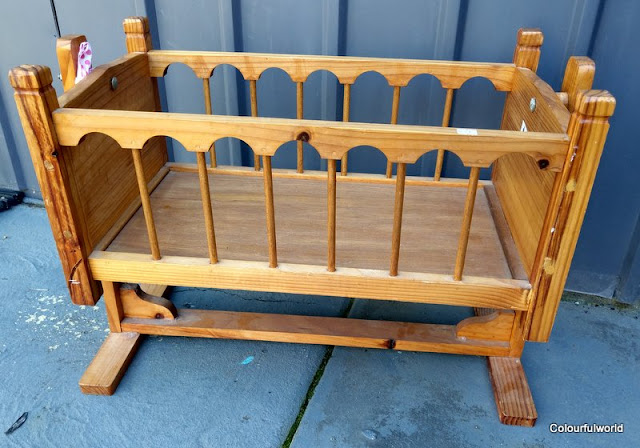 And I was silly enough to dismantle a red kid's kitchen to paint it.

It's almost finished, but it's been a puzzle to put back together! That has taught me to put all different screws into labelled containers and probably even take more photos of the various components than just this one photo!  I'll show the renovated one in the September Wrap-up. 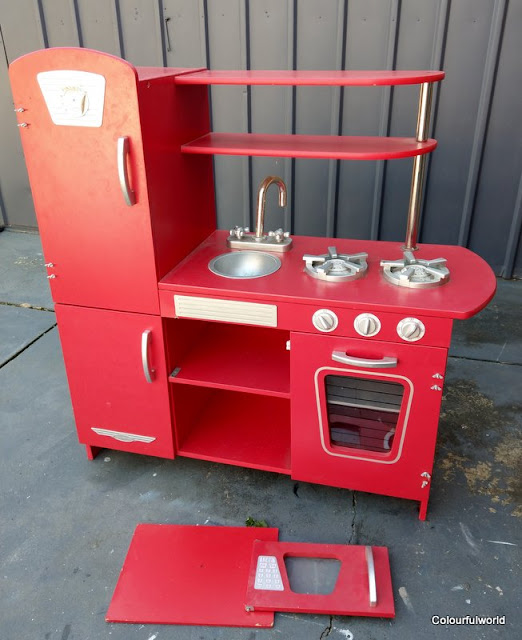 All in all a great month with lots of unusual entertainment. Now with warmer days of Spring there will be more outdoors activities hopefully.
Hope you also had a great month of August :)
Posted by Sami at 16:34