Wednesday 12 December - My daughter and I took a taxi to Bonifacio Global City or BGC as it's also know as, located about 9km from where we were staying.
Karina had told me about this upmarket financial and residential district in Metro Manila, where she had found lots of murals, and as we alighted from the taxi I could see it was quite different from what I'd seen of Manila.

Located next to Makati, another upmarket financial, BGC surpassed my expectations.
I could have been in Sydney or New York, really, the area was that good!
The traffic wasn't chaotic, the pavements were spacious, there were cycling paths, lots of green areas, there were signs that pedestrians had right of way... that is unheard of in the Philippines.
Nowhere else did cars stop on pedestrian crossings! Karina had told me the best way to cross a road on a pedestrian crossing is to start walking and put your hand out and the cars coming in your direction will reduce speed or stop 😏😏...hopefully. Scary, but it worked every time we tried it, mainly because they have to drive very slowly with so much traffic! 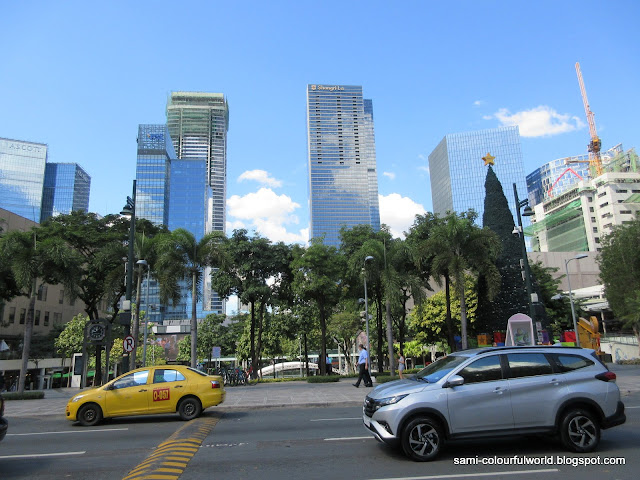 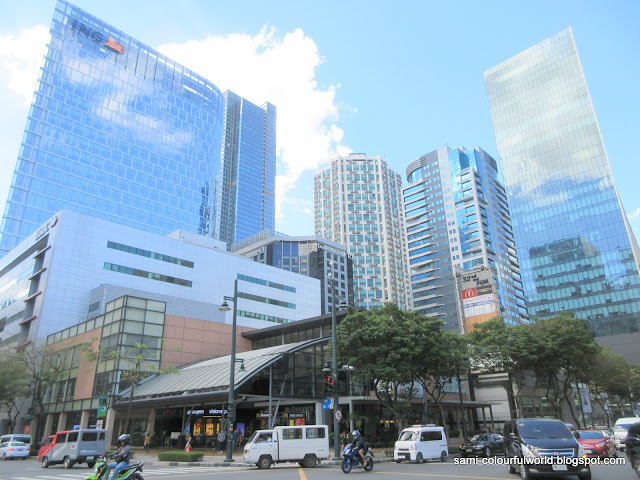 During the American occupation this area military land, but the area was sold in 1995 to developers and development started in 1998 and is still ongoing.
Lots of towers - commercial and residential, with many Filipino and multinational corporations having relocated their headquarters to this business district, and many international schools for the foreigners.

The High Street is the core of Bonifacio Global City, designed as a 3x3 grid of small office and residential buildings, shops, pedestrian friendly roads, public art, murals, landscaped areas, casual bars and restaurants, etc, that ensure the city centre is easy to navigate as well as being very usable.

In the gardens in the middle of the High Road grid they had lots of Christmas decorations and the Pixar movie characters were very popular around BGC.


We wandered around taking photos of murals - we found 18, but I'm sure there were plenty we didn't see, but the area was also a treasure trove of quirky signs which I can use for future "Signs" meme on Wednesdays.

We stopped for lunch at Salad Stop on the High street - where you can choose the ingredients and dressings to your taste. A very busy restaurant where we saw lots of Europeans who probably work for multinationals in the area.

At the far end of High Street is the Market! Market! (yes 2 x Market) 😉, one of the earliest developments in BGC.
It comprises a 5 storey shopping mall with market style themed zones with 520 shops - clothing, shoes, flowers, fruit and vegetables, food court, etc.
Next to it is the open market area where you can find stalls from the various provinces of the Philippines selling local products - honey, jams, pork crackling, biscuits, coconut products, straw bags...
I bought a small straw bag and Karina bought a big jar of honey.

Down the road I was amazed to find car stands selling Maserattis, Porshes, BMW's, Lamborghinis... I didn't expect that in the Philippines for sure!
With the congested traffic and maximum speed limit of 80km/h (49,7 miles) on the highways, I have no idea if anyone can get any joy out of riding one of these beauties, never mind the price tag!! 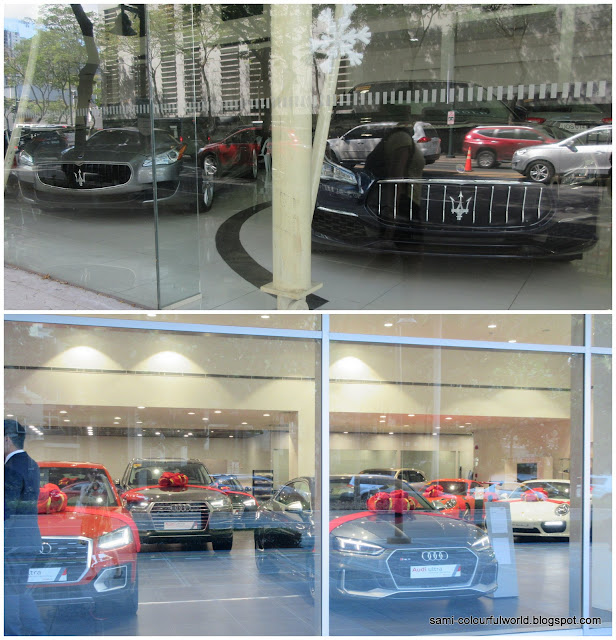 Karina spotted a craft beer bar The Bottle Shop and we went in to buy 4 boutique beers to take for Thomas back home at their place. Can you spot the funny named one... 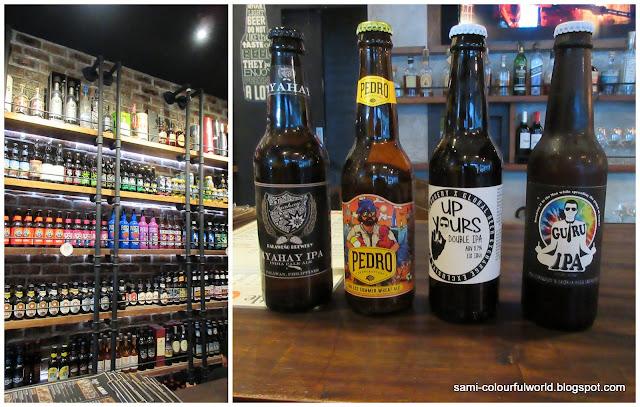 And here are some of the great sculptures I saw in BGC:]

Kasaysayan Bawat Oras by Juan Sajid de Leon Imao, a 16 meter brass and cement sculpture, also used as a sundial with seven dolls on one side representing the 7,100 islands of the Philippines. 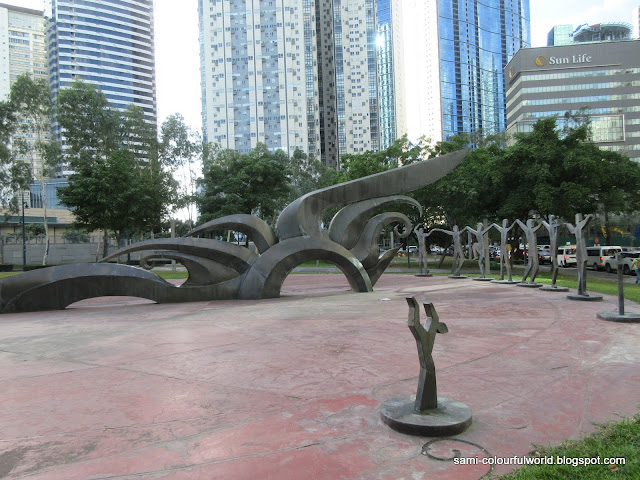 Pasasalamat -  on Rizal Drive, a brass representation of two fishermen's humble expression of gratitude to the Almighty for a bountiful harvest, by Ferdie Cacnio. 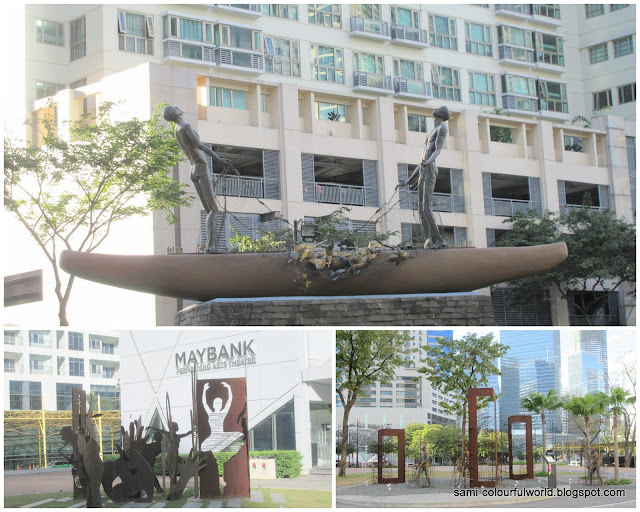 On the north end of BGC, the One Bonifacio Building is home to the Philippine Stock Exchange.
A had a good laugh when I saw a tiny girl taking a selfie in front of one of the three very cute Christmas domes in the green area by the Stock Exchange. She starts early with the selfie addiction...


It was hot and humid and we were almost at the end of our day in BGC, so we stopped for a drink at Chotto Matte, a Japanese bar/restaurant.  Karina ordered a beer and I ordered a very refreshing watermelon cocktail.
When Karina asked for the bill the waiter said it was "Happy Hour" so we could get a second drink which we did.

Earlier I had spotted a bakery selling Portuguese custard tarts - Lord Stow's bakery and we bought 2 to try. A bit disappointed as it tasted very "eggy", and the pastry wasn't as flaky, nothing like the original ones.

After our drink it was time to leave the beautiful area of Bonifacio Global City and catch a taxi to the Ninoy Aquino International Airport (NAIA) where we were picking up my husband Jose arriving on a direct flight from Sydney at 5,30pm.

Jose didn't have to wait for luggage as he was travelling with carry on only so he was out quickly. Then we joined dozens (it felt like thousands) of people on a long queue to catch a cab. We couldn't see the queue moving at all, a taxi would come once in a while...so Karina decided to go and investigate other means of transport out of the airport.

The idea was to stop at a seafood restaurant en-route to our Airbnb. Karina came back and told us there were buses every 15 minutes going to the area we wanted to go, so we jumped on the bus as soon as it arrived after having paid the fee of 35 pesos each to the driver (about 0,90Aud). She kept the google maps app on so she could see the route and when to get out, but the guy sitting next to Karina and I (3 seats each side of the bus) had said to her that he was also getting out in that area.
When time came he told us to get out the bus with him, and the bus just stopped in the middle of the road (about 4 lanes) and then we did our hand out routine and crossed the road.
Then the young man pointed out an overpass bridge ahead and told us we had to climb the bridge and get out on the other side of the road and the area we wanted wasn't far.

We were in the middle of a night market with hundreds of little stalls selling food, water, vegetables, fruit, clothing...people all over talking, eating.
We weaved in an out of the crowd making sure we didn't lose each other, Jose with his bag and me clutching my handbag close to me...it felt very scary indeed even though not many people looked at us.
The area was dirty and on the overpass bridge the stairs were full of discarded plastic bottles, food wrappers, boxes. A few poor people put out their hand as we walked past on the bridge.
On the other side a few more stalls and we could see a type of shelving units at the back and small kids slept on the shelves, no mattress, no pillow, just on the bare shelf.

After the ostentatious life of BGC here was the sad reality of the poorest people of the Philippines 😢
Jose had the worst welcome into Manila, out of the airport and into a poor area.
But just a few streets down and everything was clean and normal again, but the restaurant we were looking for couldn't be found!

We hailed down a taxi driving by and asked him to take us to the next option which was actually in Manila Bay not far from our Airbnb - Sopahbowl.

Outside we were greeted by two friendly transgender women, with beautiful make-up and clothes, and they showed us to our table, brought the menu and waited on the table.

Service was great, the food was delicious, a bit pricey for the Philippines, but the restaurant was full of locals.
After dinner we took a waiting taxi to our place and went to sleep as we had a busy day ahead.