Makati - Thursday 13th December -
Our last day in Manila and we had to vacate the Airbnb apartment by 11am.
We would have to stay in Manila until late in the evening though, to pick up daughter Karina's in-laws who would be arriving from France via London and Hong Kong.

We managed to be packed and ready by 10am and walked to the nearby SM Mall of Asia where we could store our luggage.
Husband Jose wanted to do some shopping, so after sorting out the luggage storage we went to the SM Store, a department store chain that sells clothing, beauty products and home goods.
After trying out 6 or 7 short sleeved shirts Jose chose 4, paid for them and we retrieved our luggage.

In the shopping centre was surprised to find a pet shop that even had little prams for the dogs. I had already seen 2 fancy ladies wheeling a dog pram, how extravagant when there are so many stray dogs all over Manila.

We then caught a taxi to the Makati financial district where I had been with Karina a few days before when she was looking for her wedding dress.

Karina had searched online for luggage storage in Makati and found a sort of "Storage Airbnb" and the taxi dropped us at at the BSA Tower. It turns out it was an Airbnb apartment , whose renters would only arrive late evening, so they maximise the rentability by hiring it for luggage storage for a few hours! Clever idea!!

The owner was waiting for us and after ascertaining what time we would be back we left and walked to Ayala Centre in the Greenbelt Gardens 500mt away and looked for a restaurant to have our lunch.

After perusing some menus on the outside of the restaurants we settled for Mesa Restaurant with modern Filipino food. Service was good, our choice of food was good and tasty, although I only remember the baked scallops with garlic butter we ordered for our entree and it was delicious...


After lunch we walked around Greenbelt gardens to the Ayala Museum just around the corner.

The Ayala Museum is privately run by the Ayala Foundation and houses ethnographic and archeological exhibits on Filipino art, culture and history.
There is a floor with an indigenous textile collection and a collection of pre-Hispanic gold jewellery and other gold objects on display. On another floor there was an art exhibit by Filipino masters - Luna and Amorsolo, which couldn't be photographed.

The historical exhibition was amazing with about 60 huge dioramas depicting the most important historical moments of the Philippines. 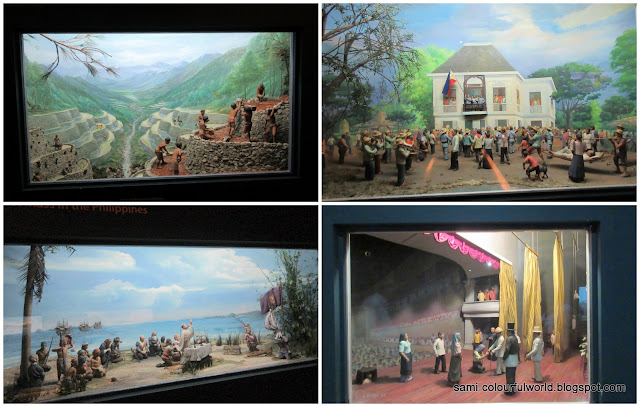 
Outside we caught a taxi to the Ninoy Aquino International Airport (NAIA) 7km away, hoping to make it in time as Thomas's (my future son in law) parents would be landing at 7pm.
Traffic was chaotic again but the driver weaved his way through a whole lot of side roads and we made it to the airport in just over 1 hour!
At the airport we had a laugh when we saw this taxi decorated with Christmas lights.


At the arrivals hall we met up with the driver that Thomas and Karina use, that had driven up from Batangas (80km south of Manila).

Thanks to Whatsapp messages we already knew that Benoir, Thomas's brother hadn't boarded the same flight as his parents, as before boarding from London to Hong Kong he had lost his passport.
The airline had to unload his suitcase (they actually unloaded his parent's suitcase too) and he retraced his steps to see if he could find his passport. He found it at the Security where it had stayed in one of the trays. But either no one had announced that they had found a passport or because their English isn't the best they hadn't heard it.
At the best of times it's difficult to make out those announcements at the Airports anyway!

Isabelle and Max arrived well, but didn't know their suitcase hadn't travelled with them so waited at the carousel for a while. Eventually Max connected himself to the internet to let Karina know they were still waiting for the bag and she told them to come out as their bag would come later with their son.

Benoir in the meantime had boarded another flight 2 hours later and would be landing at 9pm.
Karina decided that because it was late and Isabelle and Max were tired, we wouldn't wait for possibly another 3 hours and would go home with the driver that had come to get us.
She called Thomas to arrange for another driver to be sent to the airport to pick up Benoir.

And so we climbed on the van, strapped ourselves in, and two hours later we arrived!
It took 2 hours to travel 80km, mostly on the highway, where the top speed is 80km and was chock a block with traffic.

We arrived in Batangas close to midnight, and sat down to have something to eat before taking a shower and going to sleep.
We had already gone to bed when Benoir arrived at 2am.

The next morning after breakfast we took a walk around the Shell compound where Karina and Thomas live. It comprises about 50 houses, a small apartment building for the single people, golf course, swimming pool and a community house/pub where they hold events like Christmas, New Year or game nights.
The city of Batangas has about 300 thousand residents, so a big contrast to Manila with its 16 million!!

Just down the street from Karina's house this strange "thing" on a tree caught our eye.
It was a weaver ants nest, where the thousand of ants construct nests weaving together leaves using larval silk. These ants can inflict a painful bite if disturbed and often spray formic acid on the bite wound resulting in intense discomfort.

The sky was getting darker even though it was the dry season and eventually the rain started falling hard and we sprinted the last few metres to the house. 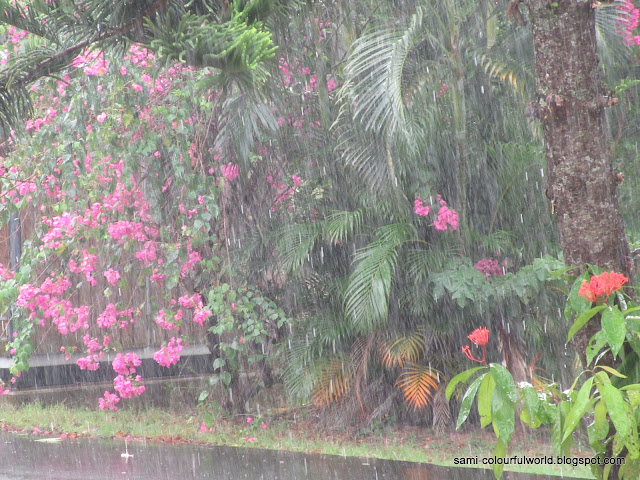 Later in the afternoon the family of 7 was driven in two trips to the SM Mall of Batangas.
As Karina and Thomas only have 1 car, first the ladies were dropped off and then Thomas drove back home and picked up the men.
We explored the shopping for a while and then Karina suggested we go and have an espresso coffee at Brewista Coffee & Hookah Lounge, a very cute coffee shop across the road.
Apparently they are just about the only ones that can make a good espresso. Not being a coffee drinker I had tea.


I had already seen the lack of road rules in Manila, but even here in a smaller town of 300,000 people the same happens. No helmets, people clinging to the outside of the jeepneys, kids on bikes, answering mobile phones, looking at facebook at the traffic lights...

At night, after dinner we sang Happy Birthday to Benoir (Thomas's brother) and had a slice of chocolate cake which was delicious.
And so ended our first day in Batangas. 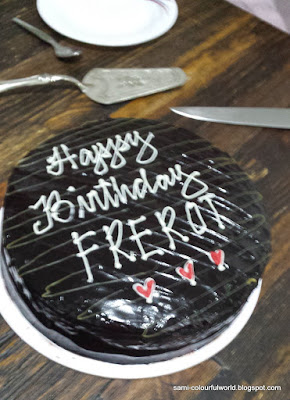