Friday 3rd - we had dinner at the Portuguese Club (the traditional Codfish is always served  on the first Friday of the month). We hadn't been for a couple of months, so it was nice to see our friends sitting along a huge table. 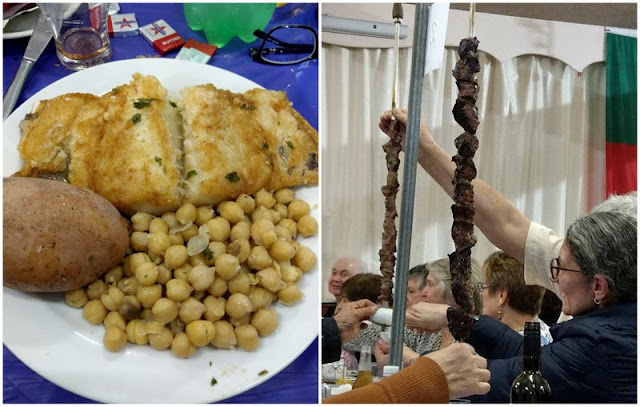 Saturday 4th - after lunch I met with the Committee ladies from the Portuguese/Australian Women's Association in the city to discuss our next event in October.
In this photo we are holding a handmake Portuguese guitar (12 string instrument used to play Fado) an award which the Association won in August during the WA Portuguese Citizen of the year awards in the Community category.
At 6pm Jose and I joined our son Michael and family at the Riverton Pub to celebrate his birthday.
Sunday 5th - it was Jose's birthday, but because I organized a celebration dinner for him for the 18th (due to Father's day on 5th, and a Father's Day Dinner/Dance at the Portuguese club, which we were attending), we had lunch at home, a slice of walnut cake, and then drove to Scarborough Beach for a walk in the sun and an ice-cream. At 6pm we joined 2 friends to watch a French movie (Eiffel) at the Windsor in Nedlands.

Friday 10th - We had dinner at a Lebanese restaurant - Elie's Tent, in Victoria Park, and Jose even got invited by the belly dancer to show his not so good Arabic dance skills. It was good fun, the food was delicious too.
Saturday 11th -  we attended the Father's Day Dinner/Dance at the Portuguese Club, when male members don't pay for dinner.  The food was tasty, but far too much as usual, the music was good and we had fun dancing until midnight.
I took a walnut cake which I sliced into small squares to add to the dessert table.
Sunday 12th - a nice sunny day, and we spent it outdoors doing some gardening, lots of weeding and preparing the patio for Jose's birthday dinner.
I discovered a wagtail had made a nest under our old rotary clothes line that we now use as a cover over our veggie patch. It has been a few years since they had nested there. Can you see how they weave such beautiful nests? 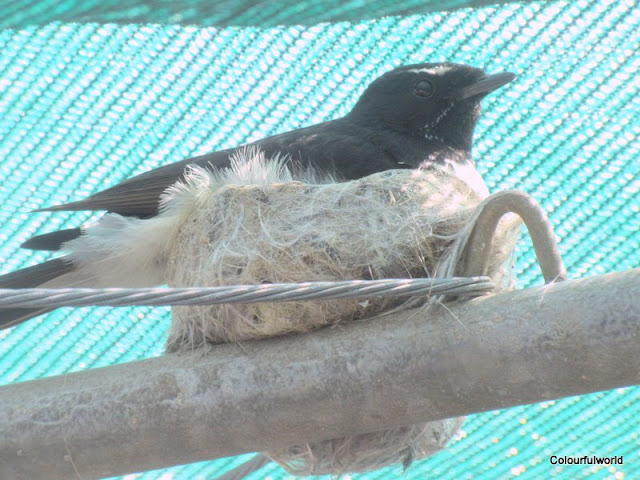 Saturday 18th - We had about 20 people for early dinner to celebrate Jose's birthday.
Jose made Chicken Curry and I made Codfish with Cream sauce. I set out a plate of cheese, dips and crackers for starters, and decided not to make any desserts as most of the guests offered to bring desserts or cakes.
We were hoping for a nice sunny day, but it drizzled and was actually a bit cold, so even though Jose had put the outdoor gas heater on the covered patio, most people, specially the older generation preferred to eat indoors.
The last guests left at about 10pm and we managed to get 2 loads in the dishwasher and put everything away and kitchen cleaned by midnight!
Sunday 19th - I had had an invitation to go to Darwin and managed to get a very reasonably priced flight (accommodation/tours had been paid for), so I departed on the 11am flight and landed in Darwin at 4pm (they are 1 1/2 hours ahead of Perth).
I checked in at the Oaks Elan Darwin Hotel, and from the 20th floor managed to spot a few murals in the city centre.
My friends and I walked to Darwin's Waterfront precinct and as nobody was actually too hungry we just ordered a few tapas to share for dinner at Wharf One.
Sadly Jose couldn't go with me as he had just started a new job in June :(
Monday 20th - Our tour bus picked 7 guests at the hotel at 8am for a day tour to Litchfield National Park and we returned to the hotel at 7pm after travelling about 400km and a few stops for a swim along the way.
From the 21st to 24th - our tour guide Paul picked the same 7 guests at the hotel and this time we drove to Kakadu National Park and Katherine Gorge. We drove and average of 400km a day from early morning till evening, with lots of stops, walks and climbs.
I'll write about my Darwin trip in separate posts as there is lots to say and plenty of photos too. I promise I won't post all of them 😉 as I took just over 2000 photos in 6 days!!
Needless to say I had an amazing time and was pleasantly surprised with the small city of Darwin and with all the natural beauty of the National Parks!
Saturday 25th - after checking out of the hotel, I had time for some last minute visits in Darwin and caught my flight home at 4,30pm and arrived at 6,30pm and  my favourite driver picked me up. 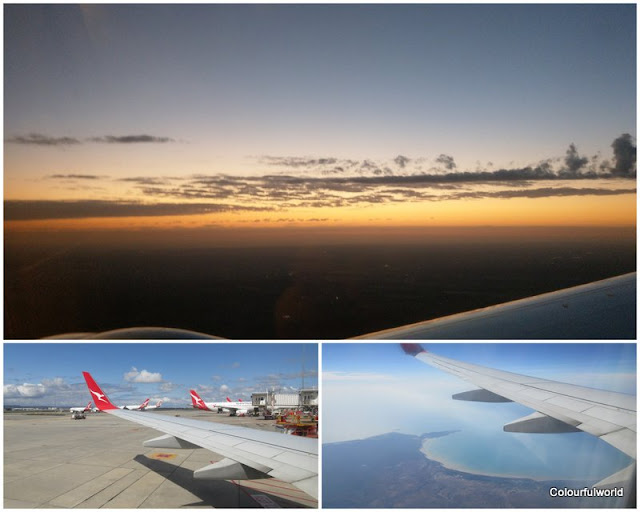 Monday 27th - a public holiday in Perth, celebrating the birthday of Queen Elizabeth II (which is actually in April), and Jose and I went to Kings Park Botanic Gardens to see the wildflowers during the Spring Festival.  The day had started cloudy but in the end it turned out to be a nice sunny day. 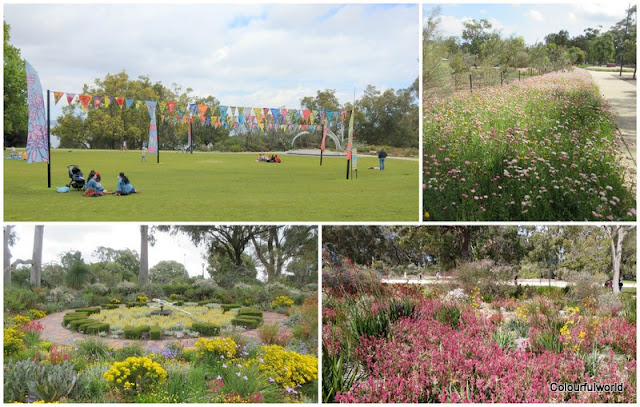 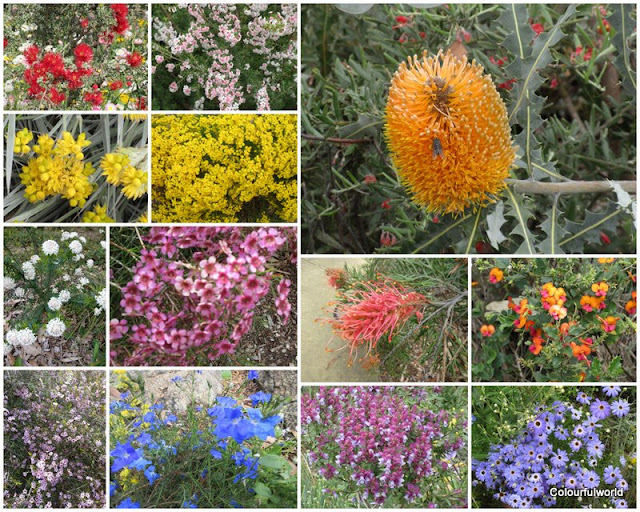 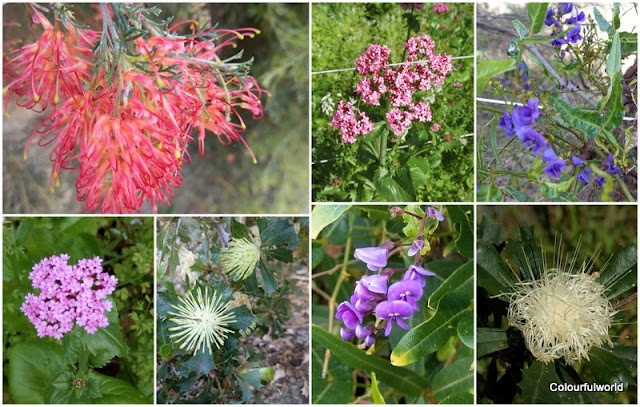 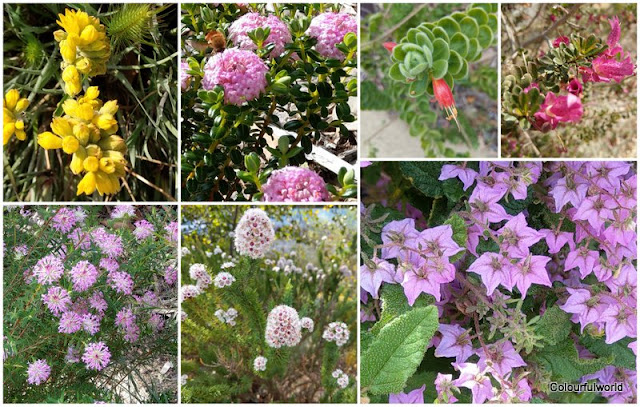 Kings Park is always a favourite spot for a walk with beautiful old trees, monuments to the heroes of the various wars and fabulous views over the city and South Perth. 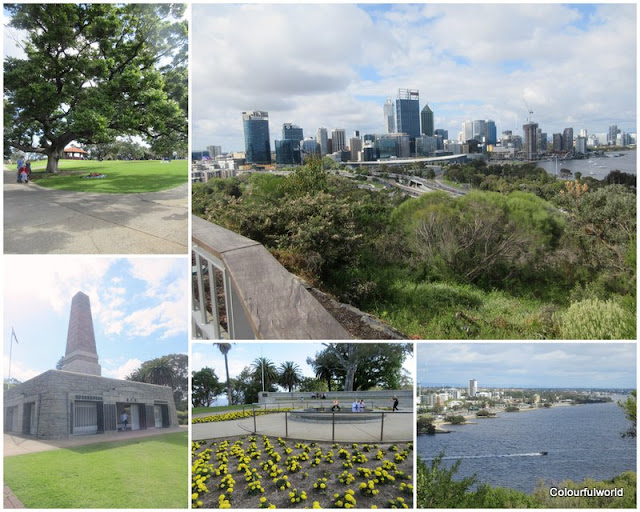 After the visit to the Park we drove to Fremantle and stopped at Little Creatures Brewery for a drink with a view of the harbour.

When we drove home the sky had turned dark and I spotted a rainbow. 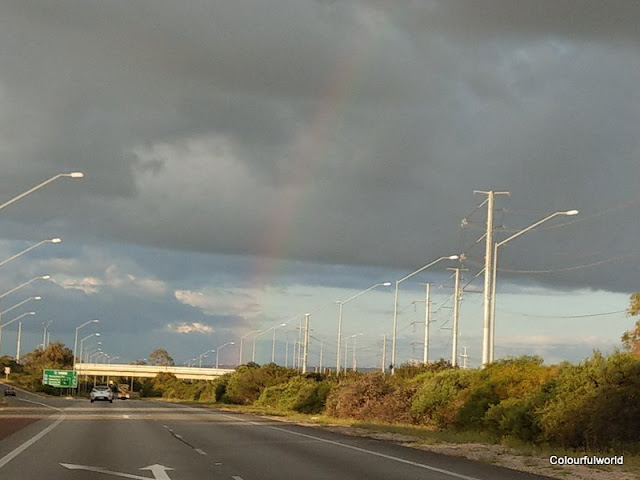 And so ended a very busy month of September! Hope you had a great month too.
Posted by Sami at 00:00