Joining Tom for the Signs meme

21 Sept 2021 - Had breakfast, then checked out of the hotel, as we would only be returning 3 days later. The tour guide picked up the group of 7 at 7am.

Our first stop was at Fogg Dam Conservation Reserve, about 70km from Darwin. We drove along the dam wall and stopped at a couple of lookouts to sight local birds. A beautiful and quiet spot, lots of waterlilies and a we saw mainly a lot of ducks. At one of the lookouts we were told by people there they had spotted a crocodile but we didn't see it while we were there.

The Humpty Doo Rice trail - was an experiment in the 1950's by a joint Australian-American company - Territory Rice Ltd - to irrigate the plain of the Adelaide River to produce a commercial crop of rice to supply to Asia!

Fogg Dam was then built by the Royal Air Force Airfield constructions squad to provide water for the Humpty Doo rice project. By 1959, the project which was a disaster was abandoned and Fogg Dam became a bird protection reserve, and the land was given back to the Northern Territory government. 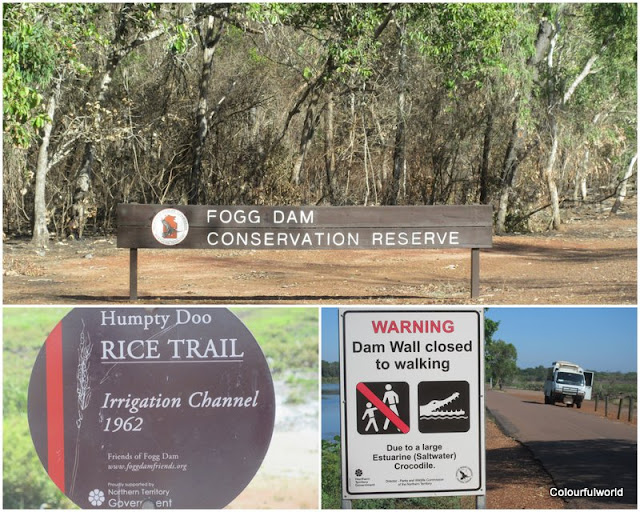 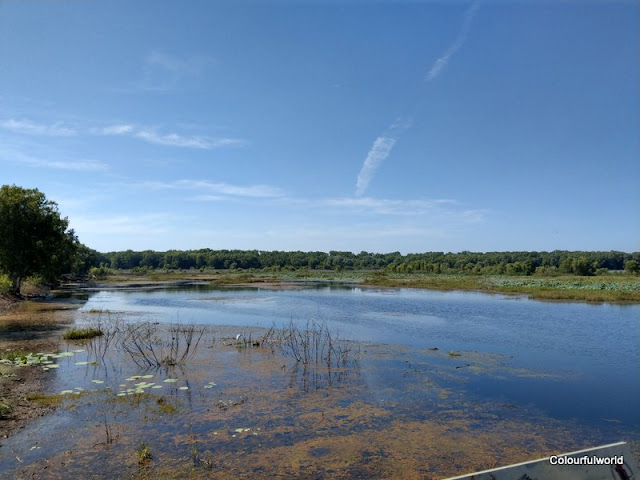 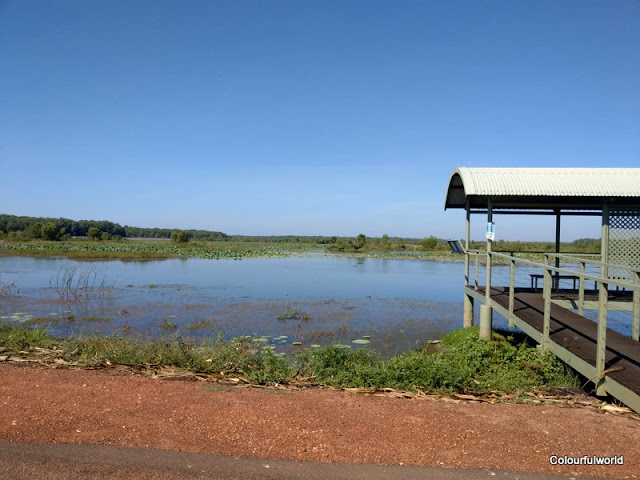 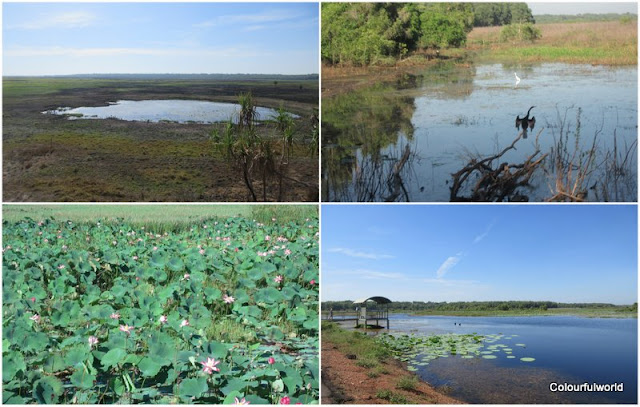 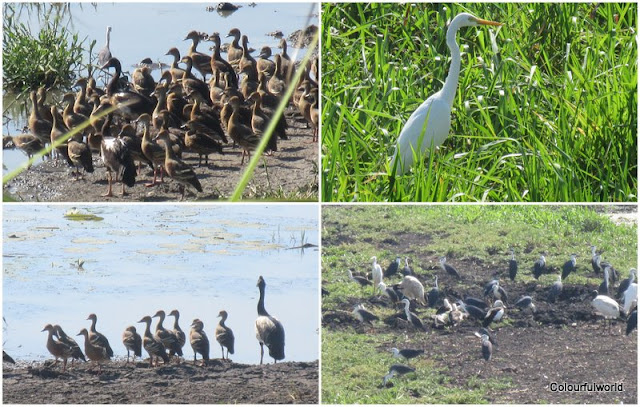 Next we stopped for coffee at the quirky Corroboree Park Tavern, and we also bought something to have for lunch later on. The tavern on the Arnhem Highway is halfway between Darwin and Kakadu National Park.

They also have accommodation, and they are know for keeping 2 crocodiles - Brutus the salty (salt water crocodile), famous for an encounter with a chain saw in 2016, and Fred the freshy (the not so dangerous fresh water crocodile), a couple of buffaloes (introduced from Asia) as well as a huge pig!

About 1,20h later we arrived at the Mamukala Wetlands, considered to be one of the best birdwatching areas in the Kakadu National Park. (Time to start planning your next trip David 😉).

The observation platform has murals illustrating the seasonal changes through the year. The area has a large number of magpie geese (usually at the end of August), jacanas, cormorants, purple swamp hens, finches and kingfishers that congregate in this billabong.

After a 20min drive we reached Jabiru - a small mining town within the Kakadu National Park, with about 1000 inhabitants, originally built for the staff of the Ranger Uranium Mine, which was operated by Energy Resources of Australia. Uranium was discovered here in 1969 and the mine opened in 1980. Mining operation have officially ceased in January 2021 and the area is undergoing a recovery to eventually be converted into an Indigenous run tourist town.

The town has a lot of services - eating places, pool, sports oval, golf course, tourist accommodation (the Mercure Kakadu Crocodile Hotel is famous for its crocodile shape), and an aerodrome from where the scenic flights over Kakadu depart.

We stopped for lunch at the man-made lake by the park which had been planned to be used for water sports by the residents/mine workers, but apparently a few months after its opening a salt water crocodile moved in.... so no more water sports!

After lunch we visited the Aboriginal-run Marrawuddi Gallery, that sells artworks created by Aboriginal artists living in Kakadu and surrounding region. They had books, clothing, bags, souvenirs, wall art... lots of beautiful things, but quite expensive (for me anyway!). The only souvenir I bought were two fridge magnets.  There was a huge Aboriginal mural at the back of the gallery, which I'll post sometime. No photos were permitted inside.

Next stop about 30min later is Ubirr - one of Kakadu’s most visited spots.

Stories about law and behaviour are told via paintings, and some are from the time the Indigenous people first encountered Europeans in the 17th century. 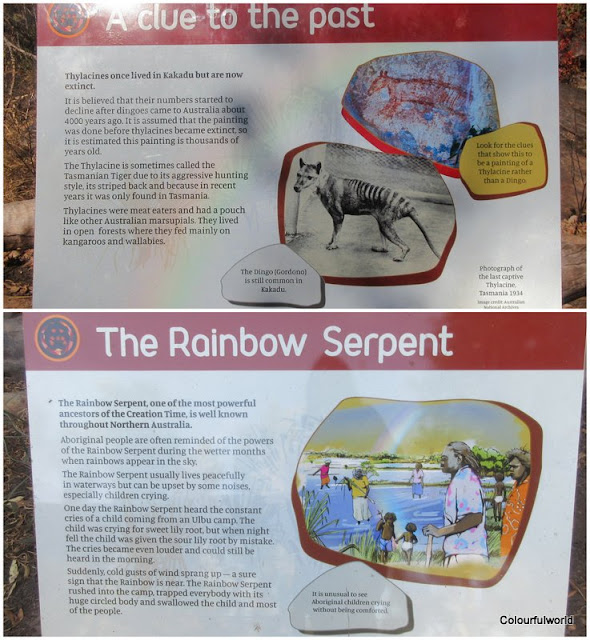 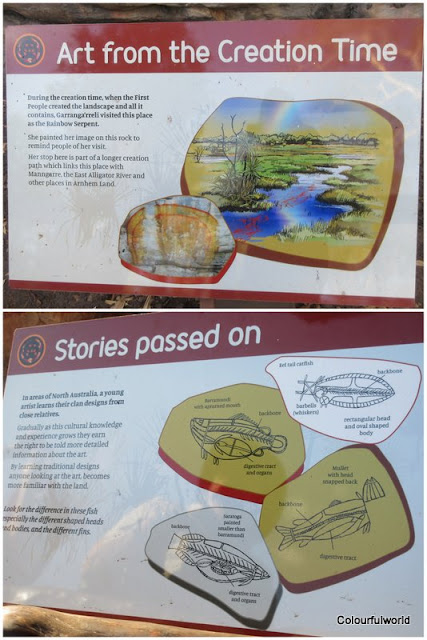 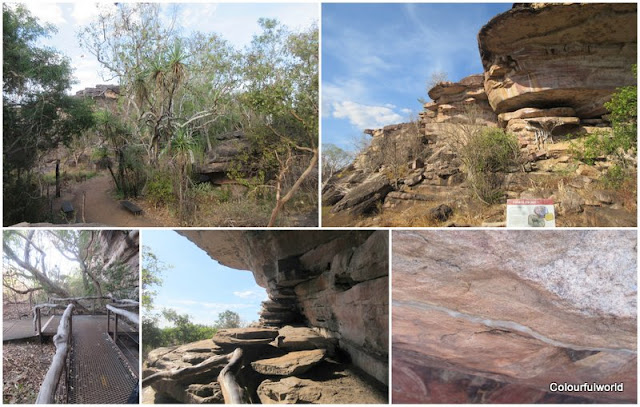 A 1 km circular track takes visitors past Aboriginal rock art sites, until you reach a steep 250mt climb to a rocky but stunning lookout with 360 degree views of Arnhem Land and the Nadab floodplain.
Quite a strenuous climb for the unfit, and a couple of people in our group opted to stay below.
When we reached the top, we spent a short while sitting in silence, feeling at peace observing the natural wonders around us...
It would have been amazing to see the sunset from there, but we had to carry on.
I think the photos don't do it justice, it's just a phenomenal place!

A few minutes drive away was Cahills Crossing - on the East alligator river, a notorious and the only car river crossing into Arnhem Land, where about 16 thousand people live, about 12 thousand of them Aboriginal. There is a viewing platform from where people can watch crocodiles, best seen at high tide. There have been 5 fatalities at this spot, and it's an extremely dangerous spot to drive across, because even though it's 50km from the river mouth, the high tide can reach over 6mt high. On one side is a barrier made with stone boulders to stop cars being washed away... On the other side of the river a lone young fisherman was throwing rocks at a crocodile and our guide was getting quite upset and shouted at him to stop it.
The Alligator River, was named by Captain Phillip Parker King in the 1800's as he believed the crocodiles infesting the swampy river were alligators. There is an East/West and South Alligator river.

It was time to get going as we still  had an hour's drive ahead to our accommodation for the following two nights - Cooinda Lodge (meaning: happy place), where we arrived at 7pm.

Just before reaching our accommodation we crossed a barrier of fire in the fields, which was a bit scary for all except the guide who seemed unruffled by it! The controlled fires are part of the park's management and a traditional practice by the Aboriginal, done in cooler weather to prevent wildfires during the hot summers, and to encourage biodiversity to recover.  Our guide told us these fires rarely get out of hand.

Upon arrival and check-in,  dropped our bags at the cabin, and I just had time to make a quick call to Jose from Jenny's phone (the only one who had Telstra coverage) to announce our arrival in Kakadu, and then we went to dinner as the kitchen closed at 8,30pm.

I later discovered two Telstra phone booths near the restaurant (since August 2021 all calls to local and national fixed or mobile phones have become free), so after dinner I called Jose with an update of our day, and I did the same the following day.

It was an early night for us as we would have to be ready at the entry of the lodge at 6am for a sunrise cruise...

Map of our itinerary from Darwin to Kakadu National Park:

It was a long day, but exciting day, we covered about 412km , in a 12 hour period with the various stops. 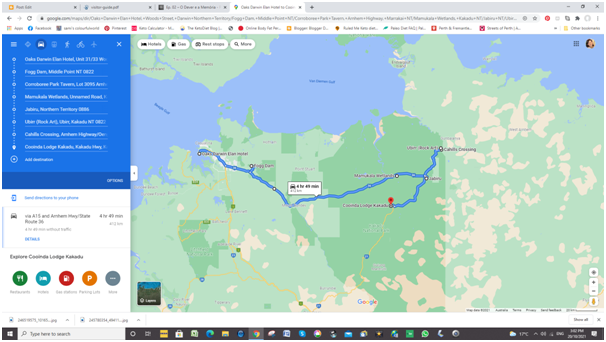