Sunday 22 December - We had given Max and Isabelle (my daughter's in-laws) an early Christmas present, as they wouldn't have time to use it after Christmas - 2 tickets for a Captain Cook cruise from Perth to the port city of Fremantle.

The cruise departed at 9,30 from Barrack Street Jetty near Elizabeth Quay, so that morning Karina and I drove them into the city and saw them off.

They were expected to arrive in Fremantle 1h15 later, so we returned home (20min drive) and a short while later Karina, Thomas, and I picked up Benoit from their Airbnb and drove to Fremantle (30min drive).
I parked my car at the Victoria Quay parking lot, paid for parking, and when we got to the pier the in-laws were just coming off the boat.

Just outside the Maritime Museum there was a free outdoor exhibition about shipping containers and their contribution to our way of life, entitled "Container - the box that changed the world", with 6 solar-powered containers, each conveying a story of how containers have revolutionized trade, transport, business and our day to day life.

We next walked to the Round House, the oldest public building in the Swan River Colony, built in 1830, just 18 months after settlement.
Used as a jail until 1886, it had 8 cells and a jailer's residence, all opening onto the central courtyard. It has had various other uses since, but is now open to the public.

Fremantle is also home to many of the State's beautiful Victorian buildings.

On the way to the Fremantle Market I saw these beautiful oldies driving by. 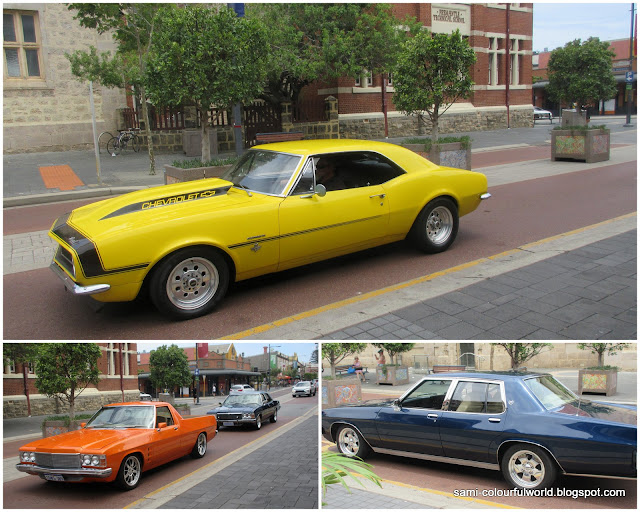 The Fremantle Market was established in 1897, and is one of two surviving municipal market buildings in Western Australia that is still used for its original purpose.

With over 150 stalls, it is one of Fremantle's most visited sites by tourists and locals, and is only opened from Friday to Sunday. 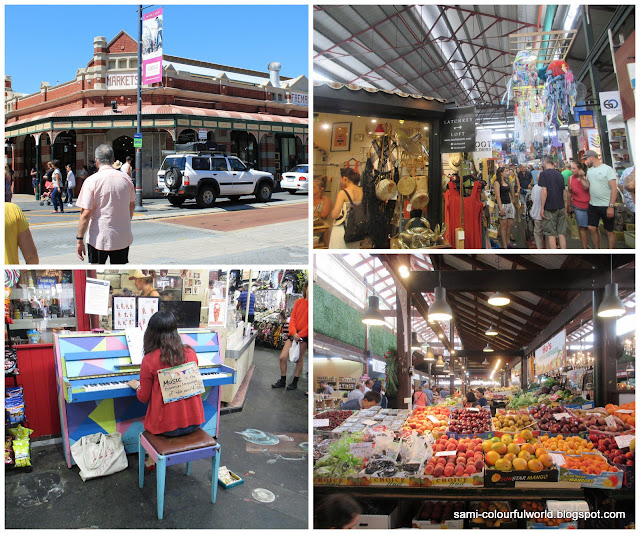 After the market we had lunch at the nearby pub "The Monk". The men were keen to try the tray of craft beers, and the food was quite nice. We even had a young French girl serving at our table.

Next, we walked to Fremantle Prison just behind the market, as they wanted to do a prison tour. The tour lasts just over 1 hour, and I went to retrieve the car from the parking lot by the harbour and then waited for them in the prison's parking lot.

The prison opened in 1855 and closed in November 1991 and is now a World Heritage site.
Unfortunately there were 44 hangings carried out at this prison, with the last one in 1964! 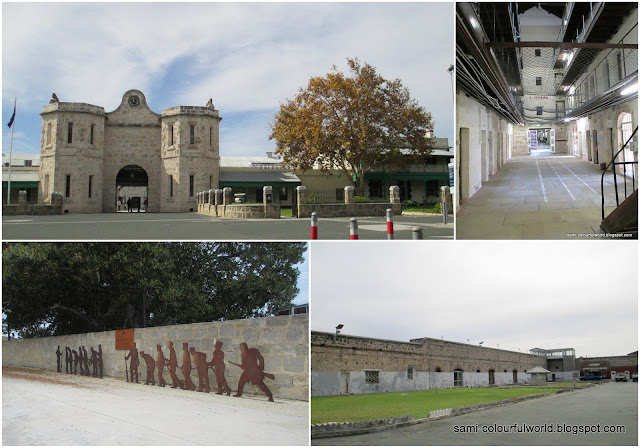 When they went in I called Jose, who had stayed home, to meet up with us at the prison, as we had arranged to go to past our son's house for coffee.
After the visit at Michael's house we went home for dinner.


Monday 23rd December - the whole family was invited to a barbecue, swim and boat ride in the river at our friend's house, so it was a quiet and relaxing day.
After a swim Isabelle and Max went out on the paddle boat and the rest of us went on the electric round boat.

Some of the feathered animals in the river had downy offspring and it was cute to see them feed the young. 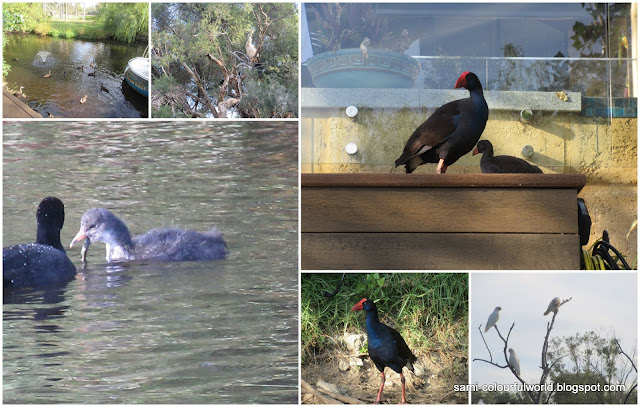 At 6pm our friend calls the ducks, and whatever other animals are around the area and they came and feed on the bird feed he throws them. 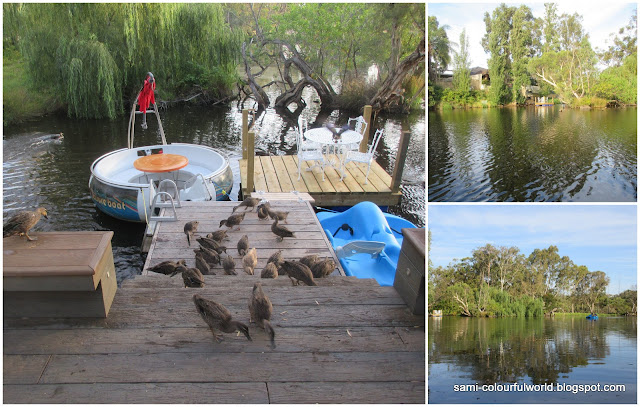 When we returned home in the early evening we set out the tables on the deck for our Christmas Eve dinner the next day.

Tuesday 24th December - While Karina and Jose did started on food preparation for dinner, I took Isabelle, Max, Thomas and Benoit for a drive to the "Crawley Boatshed", also known as the "Blue Boathouse" in Matilda Bay.
This iconic boathouse in Mounts Bay Road, just below Kings Park has been around the 1930's and is Perth's most instagramable spot. 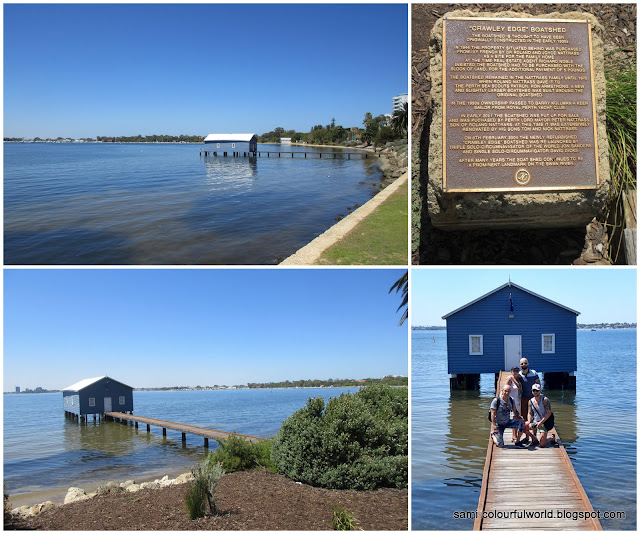 Near the boathouse, Eliza a bronze sculpture in the Swan River, named after Mount Eliza, the hill where Kings Park is located, and commemorates the old Crawley Baths which were demolished  in that area in the 1960's.
Eliza is 2,2 metres high and was created by Perth artist Tony Jones. She often gets dressed up on special occasions or just for fun by humorous Perthites.

I then drove just around the corner to the Bayside Kitchen, a lovely cafe that serves breakfast, lunch or dinner with views of the Swan River and right by the Matilda Bay beach. They had a great choice of gluten-free cakes which pleased Isabelle and they had coffee and cake and a juice for me.

After our stop I was meant to take them to one more tourist attraction, before returning home, but Isabelle wasn't feeling too well, so I drove back and left them at their airbnb so she could rest.

The guests started arriving at 6,30 for our Christmas Eve dinner which was held outdoors in our patio.
I made the main dish - Codfish in cream sauce, made the Christmas fruitcake and two desserts and prepared a cheese and crackers platter. My daughter in law made the ham, and other guests guests brought salads and more desserts.
It was an enjoyable and loud event with 16 people sitting down to dinner, and people speaking in 3 different languages. 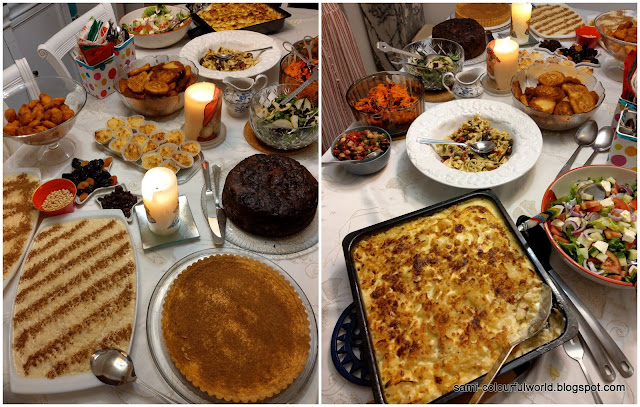 It was almost midnight when the last guests left and we moved to the sitting room to open the Christmas gifts.
It was close to 1am when the the French in-laws left and walked to their airbnb just 5 minutes away.


On the 25th December, guests started arriving at 1pm for lunch. This time we had 12 people around the table, and because it was a very hot day, instead of eating outdoors we extended the dining table and ate inside.

After lunch we gave our two grandchildren their presents. Little J was given a small keyboard as he loves music and dance, and we all had a laugh when we set up the keyboard and he just sat down and started banging on the keys. When I prompted him to sing he started with "Wheels on the bus" and then just carried on with 3 or 4 other children's songs. A true performer! 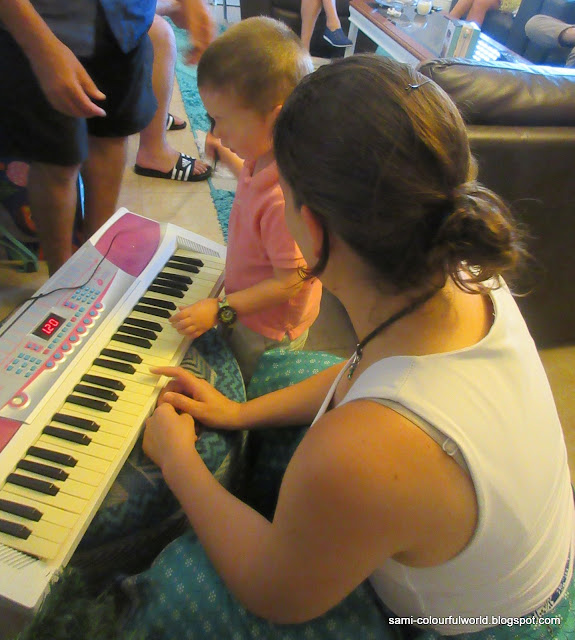 A good time was had by all.

Countries I have visited 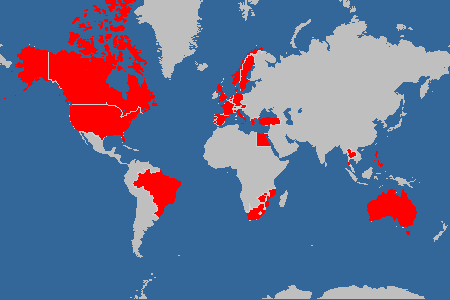