MANILA - Tuesday 11th December - for my second day in Manila, my daughter Karina had arranged a day tour booked through Tripina.
The tour guide met us on the lobby of our building at 9am and we walked to the corner Cafe to have a coffee until the driver arrived about 10 minutes later to pick us up in his car.

As usual traffic was slow and hectic but as we sat at the back the guide talked about the Philippines and its history, the first recorded visit in 1521 by Ferdinand Magellan, the Portuguese born explorer working for the Spanish crown and the introduction of Christianity to the islands.

The Spanish ruled for 377 years from 1521 to 1898. From 1565 to 1821 the islands were administered from the Vice-royalty of New Spain in Mexico City. When Mexico became independent from Spain in 1821, Madrid took control over the area again until 1898, when the Philippines became a territory of the United States, independence from the USA was achieved in 1946, but in between the country was occupied by the Japanese from 1942-1945.

The guide was very eloquent and funny and explained that all these wars and struggles of the Filipinos to achieve their independence has turned them into very resilient and strong people.  I also found them to be very calm and mild mannered, very friendly, but they have a strange inability to give bad news or to say no.

After driving past the American Embassy building and various other important structures like Museums and cultural buildings we drove to our first destination.


QUIAPO - the driver let the 3 of us out just outside the Minor Basilica of the Black Nazarene or Quiapo Church, one of the most iconic churches in Manila thanks to the Black Nazarene, a dark statue of Jesus Christ, said to have miraculous powers.

Daily masses are celebrated in Tagalog (Filipino main language) to devotees from all walks of life, as well as transmitted on a Catholic TV channel, on YouTube and on the Church Facebook page.
Surrounding the church we found a lot of street vendors selling "necklaces" of sampaguita flowers (Philippine Jasmine) to drape over the Saints, as well as balloons, flowers, candles, figurines, rosaries, herbal products, etc.


Every year in January they celebrate the "translacion" of the Black Nazarene statue from the Basilica to the Church of Saint Nicholas Tolentino, and there are many people who are devoted to carry the statue around as a sacrifice, believing that by participating in the procession they can be forgiven for their sins and shady deals of the year.
The Filipinos are very religious, about 86% are Catholic, and during the "translacion" millions of people (estimated to be around 9 million) surround the Black Nazarene en route, many of whom are barefoot and many try to touch the statue to feel blessed or worthy of a miracle.


The Black Nazarene is so called as it's believed that when the wooden statue carved in Mexico in the early 1600's was brought to the Philippines, the Spanish galleon caught fire and the surface of the statue was charred to a dark colour.
The statue has since survived fires in the Quiapo area, as well as earthquakes and a bombing during the Battle of Manila in World War II.

At the back of the church there was a long line of people waiting to climb a narrow flight of stairs to kiss the foot of the Black Nazarene statue hanging in the church. Our guide was very keen to also go, so we joined the line to pay our respects to the Black Nazarene.

Next the driver dropped us in CHINATOWN - apparently one of the oldest Chinatowns in the world - Binondo, which was established in 1594.
In this area the Spanish allowed the sangleys (mixed Chinese and indigenous/Indio (Filipino) to live and trade, so they could be indoctrinated with Christian beliefs and be converted to Roman Catholics. Due to the Chinese influence there are also a lot of Buddhist temples in this district.

Most shopping malls in the Philippines are owned by very rich Chinese Pinoys (Filipinos of Chinese descent).
We stopped for lunch at Cafe Mezzanine, owned by a wealthy Pinoy who supports the volunteer fire-fighters in Binondo.
The guide joined us after lunch and took us to the Minor Basilica of Saint Lorenzo Ruiz or Binondo Church not far from the restaurant.
The church founded in 1596 to serve the Chinese converted to Christianity, was very pretty, with pink walls and decorated ceilings.

I found the Chinatown area very rundown and dirty, dozens of electrical cables tangled over the roads, and once again saw a few children sleeping on the pavements, women begging, and stray dogs, all very sad and distressing.

After visiting the Church the guide called the driver and as he was parked far away and it would take him a while to reach us due to traffic, we agreed to walk to Intramuros not far away and the driver would pick us up there after our visit.

INTRAMUROS - is the historical heart of Manila. The 16th century walled city shows the story of Filipino resilience and has been the scene of all manners of oppression against them - the Spanish during 377 years, the Japanese during the Second World War and the Americans from 1898 to 1946.

The Philippines is named after King Phillip II (1527 - 1598), the son of the Spanish King Charles V and Isabella of Portugal. He was King of Spain (1556-98), King of Portugal (1581-98 as Phillip I), King of Naples and Sicily, King of England and Ireland (during his marriage to Queen Mary I - 1554-58), Duke of Milan and Lord of the Seventeen Provinces of the Netherlands. His empire included territories on every continent known to Europeans, including the Philippines.

In Intramuros we started by visiting Fort Santiago, built in 1571, the oldest defense fortress in the Philippines, built by Spanish conquistador Miguel Lopez de Legazpi, which is part of the structure of the walled city, and one of Manila's most important historical sites. It's situated right next the Pasig River mouth just off Manila Bay.
During World War II, the fort was captured by the Japanese Imperial Army who used its prisons and dungeons to torture and execute hundreds of Filipinos near the end of the war.
Also, approximately 600 American prisoners of war died of suffocation or hunger after being held in extremely tight quarters in the dungeons at Fort Santiago.

Another high profile prisoner at Fort Santiago was Dr Jose Rizal, a national hero who led the Filipinos in a revolution against the Spanish Government to attain freedom and gain control of the country. He was tried before court-martial and found guilty of rebellion and conspiracy, and on the 30th December 1896 he was led out to what is now know as Luneta or Rizal Park and was executed. He was only 35 years old.
He trained as an ophthalmologist, but had many interests in arts, sciences and literature and he was the author of many books and plays.


The Rizal Shrine, built in 1953 as a separate building in the Fort Santiago area to honour Jose Rizal, displays memorabilia such as his books, medical instruments, clothes, business cards, pictures that he drew, etc.
The room where he was imprisoned and where he wrote his final letters to his family which included his last farewell valedictory known as "Mi ultimo adios" or "My last farewell" which he hid in his alcohol stove.

At the entrance to the gardens where Fort Santiago was located there were two beautiful sculptures made with driftwood - a horse and an eagle, by Zachary Guangco.


After the visit to Fort Santiago, the driver was there to pick us up and we drove to nearby Casa Manila, a house/museum that depicts the way a wealthy family lived during Manila's Spanish colonial days. The original house was actually destroyed during the war, but former first lady Imelda Marcos had the house restored and filled with replica items.
Just across Casa Manila is the San Agustin Church, but we didn't visit it.

The last place to be visited on our tour was RIZAL PARK, a 58 hectare park along Roxas Boulevard, where Jose Rizal was executed and one of Manila's biggest landscaped areas,  very popular on weekends with residents picnicking, running, performing, etc.
The park has also been witness to major national events ranging from presidential inaugurations, sporting events, papal visits and the political rallies against former Presidents Ferdinand Marcos and Corazon Aquino, and of course public executions.
On July 4th 1946 in front of the Rizal Monument the Declaration of independence of the Philippines from the United States was declared.

Rizal's monument is a bronze sculpture of Rizal with an obelisk set on a stone base where his remains are buried.

The independence flagpole at 32mt high (105 feet) is the highest flagpole in the Philippines.
In 2013 the flagpole was restored and increased to 46mt (150 feet) high.


And it was time to be driven back to our apartment. We asked the driver if he didn't mind dropping us a bit further up at Manila Bay so we could walk along the bay and watch the sunset at 5,30pm. We walked along the bay until we reached an area with bars and restaurants and sat down for a drink before joining hundreds of people at the stone wall to take photos of the sun setting over the bay, just behind the Mall of Asia. Magnificent!


We then crossed the road and entered Mall of Asia to go an have dinner before going home.
We were looking around for a restaurant when we came across hundreds of people screaming and holding up their mobile phones. Karina asked someone what was going on and he said it was Jason Momoa from the film Aquaman.
She knew who it was but I was clueless 😀. Anyway, the stars of the movie were on the floor below, Jason was giving a speech, but it was far too noisy for me to make head or tail of what was being said.
In the meantime we chose a restaurant and it was quiet inside, had our dinner and by the time we left the crowd was dispersing and we could then see the movie stars below.

At the Mall we found a couple of shops selling winter clothes, and had a good laugh because unless they were selling them to people who would be travelling to Europe or America at this time of the year, I can't image there would be a need for winter clothes in the Philippines.
I wonder if those shops make much money... 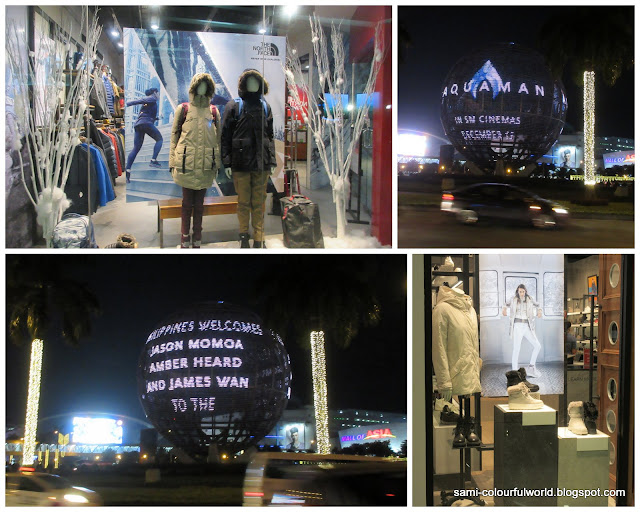 And this is how the Jeepney drivers keep their money handy.
When the passengers board they hand the fare to the next passenger who passes it on to the next until it reaches the driver. Any change comes back the same way. 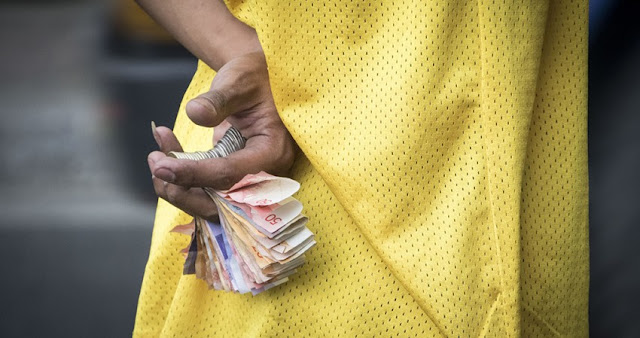 I never got a chance to photograph it properly, the photos were also blurred, but here is a great one from this blog - http://www.cyrcle.com/8174/photo-journal-manila-philipines/