Driving around the Swan River coast

Monday, 6th of March was a public holiday, and with my husband home we opted for a car ride around Perth's Swan river to show the family Perth's nicest views and the most amazing houses!

We started at the point of the river closest to our suburb - Riverton and Shelley - and made our way around all the way to Fremantle, across to the northern suburbs and returned home about 6 hours later.

Our first stop, 1 on map at bottom was to admire some of the mansions built across from the river in the suburb of Shelley. (With few exceptions most houses are across the road from the river or beach as to allow everyone access to the facilities, without having to own a mansion).


Then on to stop 2 - Deep Water Point park in the suburb of Mount Pleasant where we stopped for an ice-cream at one of the food vans. For the first time ever I saw a UV meter which showed 9 which is in the danger zone! There was also a water station where you could fill up your bottle with normal or sparkling water for a small fee. The van where we got the ice-cream had a funny sign hanging inside (bottom right of photo).

In Applecross - stop 3 - we stopped at one of the prettiest playgrounds south of the river - Heathcote Reserve, with great views across the city, wonderful playground and a small beach below. (You can read more about this park on this blog link).

Onto stop 4 - Point Walter Reserve in the suburb of Bicton, another great park, always full of people picnicking, playing sports, kite surfing, kids having fun in the water, and families having a bite to eat in the local restaurant.
There is a tongue of sand that extends 1 km into the river hosting bird colonies.
In the middle of the park there's a bronze statue "Habibi" by Ayad Alqaragholli, an Iranian born artist who's had a few of his works exhibited at the Cottesloe Sculpture by the Sea. He had one of his works at this years exhibiton (2nd photo, top left of the blog post).


After crossingn the river onto the north side of the city at Fremantle/North Fremantle - stop 5, we decided to have something to drink at the Dome cafe that sits on the river's edge. Again some mansions and the prettiest apartment blocks with river views. 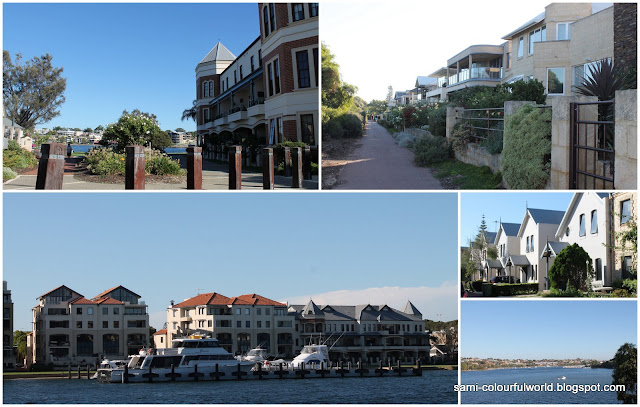 Last year "The Freo rainbow" was presented by the artist Marcus Canning. This massive piece of public art, was made with 9 recycled containers, stands 9 mt high, 19mt long and weighs 66 tonnes.  I enjoyed it's view from both sides of the river, and it's certainly a joyful piece of art.

Stop 6, was at the Bay view lookout, which is between the suburbs of Mosman Park and Peppermint Grove (among the fanciest of Perth's suburbs). It is the highest lookout over the Swan River, and from the top we could see Mosman's restaurant which perches on the river, the city in the distance, while a lot of sail boats floated by on this beautiful day.
The wall where we sat for a photo is full of commemorative plaques to those that died in the wars (I presume local residents).


And we were headed for stop 7 on our tour - Claremont jetty, in the suburb of Claremont, where we saw lots of fishermen catching blue crabs.
The long jetty was originally built in 1898 when goods were brought in to the area by ferries and barges, and it was renewed in 1991 and is now mainly used by fishermen.

The sun was setting by the time we finished our tour and returned home. It would have been interesting to know how many kilometres we travelled around the river, I'll have to take note next time...but it was a day well spent, my in laws loved the tour and were astonished with the size of the houses and boats we saw around the Swan river.
And this is how the other half live!

Hope you enjoyed the ride around the Swan River and you can follow the route on this map.