The most controversial of Perth's development - the $440 million Elizabeth Quay - was opened to the public today after 4 years of construction.

The project is not totally complete as a few buildings with both residential and office space are still to be constructed in the next 5 to 7 years.


The area was developed out of the former Esplanade Park area, creating an inlet, new ferry terminal which will move from the nearby Barrack Street , a mini island and suspension bridge across the water, boat moorings....
About four million people are expected to visit this area every year and when all completed, about 10 thousand people will work there.
Just for the inauguration day today 25 thousand people were expected! 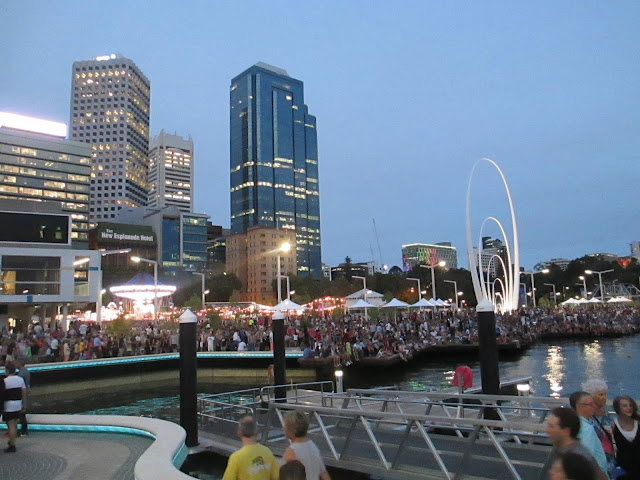 We managed an early evening visit, as the day was far too hot at 38C and we waited until sundown to leave home.

The area was packed with people wandering around and enjoying all the entertainment on offer, and the kids were having lots of fun at the water park. 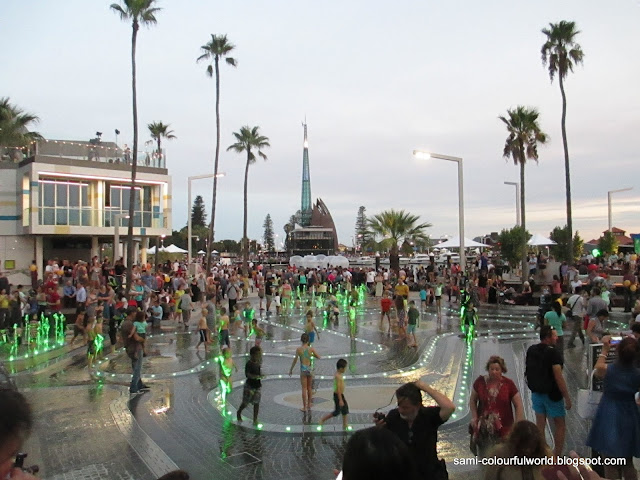 By the bridge a sculpture by Noongar artist Laurel Nannup - a 5 mt high bird with wings stretched on a boat, tells the story of how the Aboriginal people saw the arrival of the British colonists on the sailing ships.

The double arch over the bridge was packed with people awaiting the light and music show that would start at 8pm.
A bit of a disappointment...maybe because we were on the bridge quite far away from the music and water show, so couldn't see or hear much...

The launch events will run for 3 weeks, including laser and water shows projected from the water at 8pm until 10pm daily (every half an hour for 10 minutes).

The Florence Hummerston kiosk dating back to 1927, which was up the road was dismantled brick by brick and reassembled on the island at a cost of $11 million!! Compensation to the lease holders of the restaurant that operated there, plus costs of dismantling and rebuilding...  It will now reopen as a restaurant with a new operator.  This I think was a waste of money, 11 million!!! Crikey.


After the visit we wanted to have dinner, but the entry to the pop-up restaurants in the area had huge queues and we opted to go further up to the city centre to find a restaurant.     The city proved to be a bit emptier, everybody must have been at the opening...

There will be restaurants in the area, but they will only open at the end of February.


I'll leave you with a picture taken in September 2014 of Elizabeth Quay under construction.
What a difference, and in my opinion I was pleasantly surprised at how good it all looks!