A to Z of Australia - A is for Australia 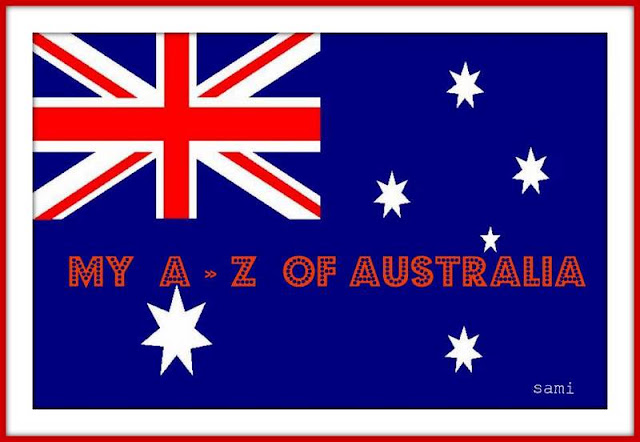 Julie Dawn , PigletinPortugal and Algarve blog have started a new topic which I thought was quite interesting.
They will be blogging about their A to Z of Portugal - their likes and dislikes using every letter of the alphabet.

I thought this a  great idea, and in my case I will post about my A to Z of Australia - the country, the people, travel, my likes and dislikes...
Hopefully I will find something for every letter, and I might repeat a few letters, as some of them have quite a few topics I could discuss.
Join in and link your posts as this should be an interesting journey.

A - nothing more fitting that starting with the letter A for Australia.

We landed in Perth, exactly 5 years ago yesterday! (11 Jan 2007)
We had previously lived in Portugal (and before that in South Africa, Germany, Mozambique) for 12 years and a long time friend who came to Australia about 10 years ago,  invited my husband to apply for a position in the company he worked for. There was a mining boom in Perth, highly qualified people were hard to come by...
We decided to come for a short visit to Perth and Sydney, to see if this was a country we were prepared to move to.
We liked what we saw, the quality of life was good, high standard of living, outdoor life style, we would be able to afford to buy a house, albeit a "renovators dream", I would have no trouble getting a job either...so we decided we would move.
Within about 4 months we packed up our life in a container and moved to Perth.
Sydney was a beautiful city, but far too big for my liking. Anyway my husband´s job would be in Perth!

Of course leaving family and friends wasn´t easy, but we were lucky we already knew two couples in Perth, which made our life a lot easier, having a bit of support. But overall Australians are friendly and relaxed people, so just join them and say "No worries mate", "Too easy"...

The language wasn´t a problem as I was raised in South Africa. I can just imagine that moving to a country where they speak a "strange" language, can be quite a challenge.
Still, during the first few months at work, my ears had to get used to a different "twang".

People spoke very fast, names were totally different from the usual, John and Joe - what about Skye, Storm, Cruze, Khrystyna, Deeon, Bora, Tamika, Dympna, Cian ...plus strange surnames. I was forever getting people to repeat what they said, and to spell their names.

You can check my post about the Australian slang to see what I mean! If you are familiar with Portuguese first names, they are very conservative, and foreign or strange spelling is certainly not allowed at all. My kids have foreign first names, but they were born outside Portugal, otherwise I would be unable to register them with those names.

The Australian society is made up of people from hundreds of different countries - 199 nationalities live in Australia, apparently! Some people assimilate better than others, but I never felt out of place for being a "foreigner". When you walk in the streets of the city, you hear all sorts of languages being spoken, it´s quite amazing.
In fact in that first company my husband worked for, they had 200 employees, and only 3 of them could be considered Australian (they were 3rd generation born here), all others were born somewhere else. They had 3 Portuguese too, can you believe it?


I leave you with 3 photos of the city skyline taken from Kings park, Perth's botanic garden, and from the suburb of South Perth, all 3 with very different sky colours.
Please join me, participate, do and A-Z of your country, and leave your comments too.