We arrived at the Braunschweig station just after midday.

We waited a short while for a tram into the city, the ride took 15 minutes and we alighted near Kohlmarkt, and wheeled our suitcases to a pub where we had arranged to meet with fellow blogger Iris and husband Ingo - the Wirtshaus am Kohlmarkt, in a beautiful house built in 1726.  We swapped gifts, sadly I took no photos. (PS to Iris: I had to give Karina the seeds, as we can't bring seeds to Australia)

Braunschweig, is the second largest city in Lower Saxony, home to about 250 thousand people, and it was the town where we lived for almost 6 years in the early 1980's, when Jose was seconded to Siemens Braunschweig to work on a railway project. It had been about 32 years since we left... a few new things around but of course the old charming buildings were still there!

We ordered our lunch (Curry wurst fore me) and sat around chatting to our hosts. Ingo was very kind and without us noticing paid for our lunch!

Eulenspiegel Haus (Fool's house) - At 3pm the bells at the house right next to the pub started chiming and a lot of people gathered below it to watch.

The door with the Braunschweig coat of arms opens up like a cuckoo clock and Till Eulenspiegel appears holding a mirror and a musical tune starts to play. It plays 3 times a day - at midday, 3pm and 6pm. The Eulenspiegel house was built in 1758 by court architect Georg-Christoph Sturm for the widow of the mayor Anton Julius Cammann. 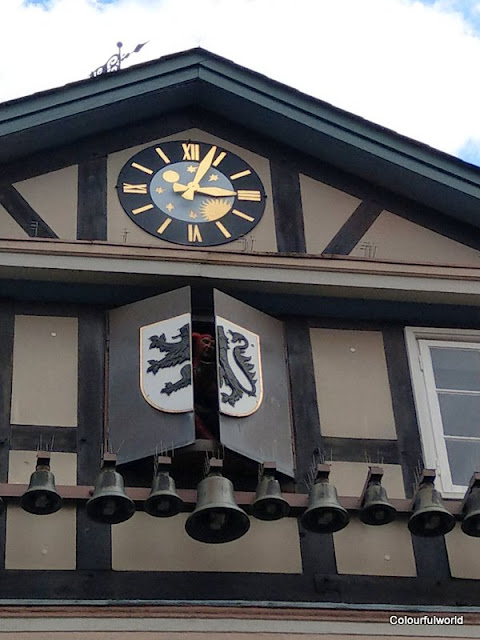 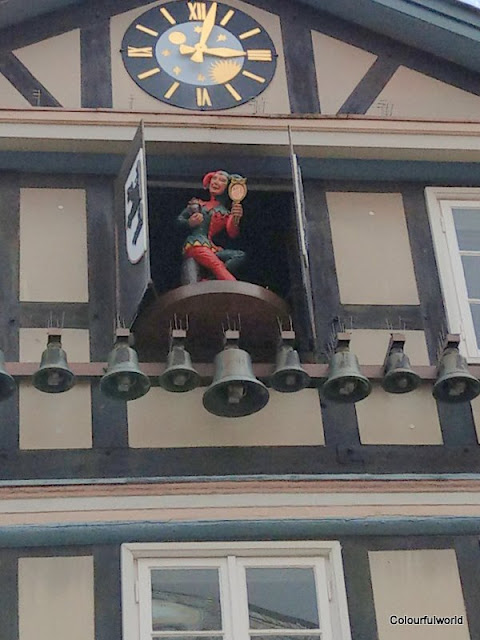 After lunch Iris and Ingo accompanied us to our Airbnb apartment right there in the city. As well as being well located, which enabled us to walk around without wasting much time on transport, we were pleasantly surprised with the one- bedroom apartment which looked newly remodelled.

Once we unpacked, we went for a walk around town and there was some sort of kids fair in town so lots of young families, music, games... 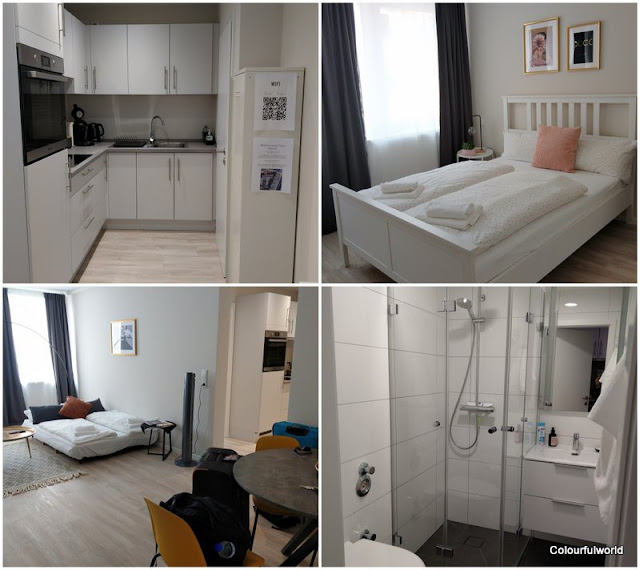 St. Blasii Cathedral (Dom) - was our first stop. Built by Henry the Lion from 1173 to 1195. Due to various interruptions of its construction, both Henry and his consort Mathilde (daughter of Henry II of England), were buried in an unfinished church.
The Cathedral is also the burial place of Caroline of Brunswick, Queen Consort of George IV of the United Kingdom and Frederick, Duke of Brunswick-Lüneburg, Kaiser Otto IV, son of Henry the Lion, among others.
Braunschweig was the first seat of the Guelph dynasty (House of Welf) and starting point of their rise to power. The church's crypt serves as a place of rest for the Guelph princes.

Among the most important pieces on display in the church are a wooden crucifix from the second half of the 12th century and one of very few huge bronze candlesticks with seven arms, from around 1170-1180. 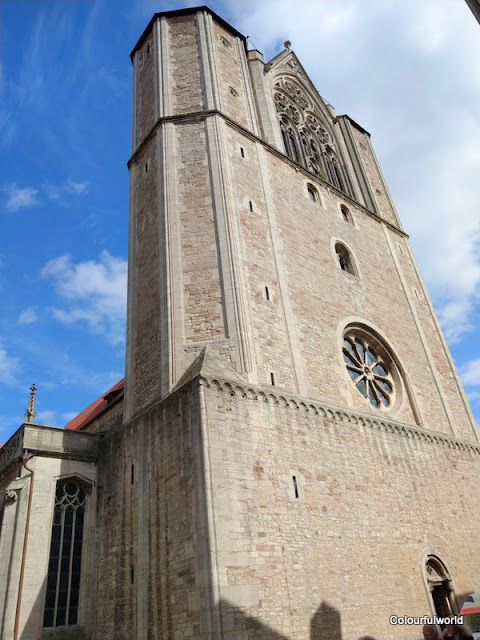 Braunschweig Rathaus (Town Hall) - built in the Neo-gothic style in the 1890's with a 61mt high Flemish style belfry which can be seen from all over the city. You can climb the 161 steps to the top of the tower for a view of the city. 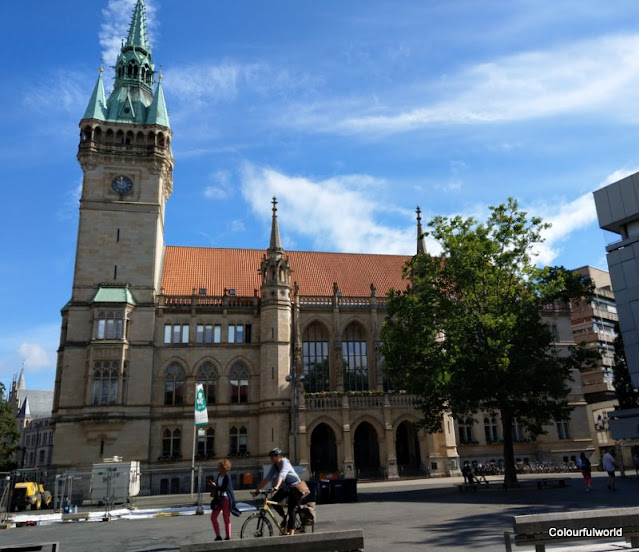 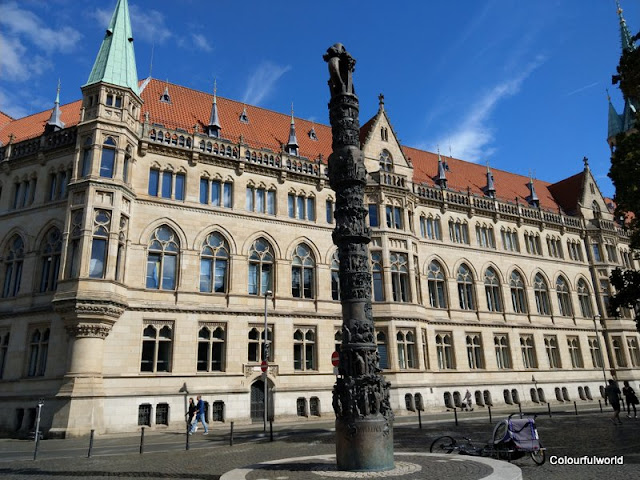 Pillar 2000 Years of Christianity - this amazing work of art by the Town Hall shows the development of Christianity in the last 2000 years through many events, from the birth of Jesus to the persecution of Christians in ancient Rome and the Crusaders until the attacks on the World Trade Center in September 2001, and the symbols of the three religions Islam (the crescent) Christianity (Cross) and Judaism (Star of David) are at the top of the column. 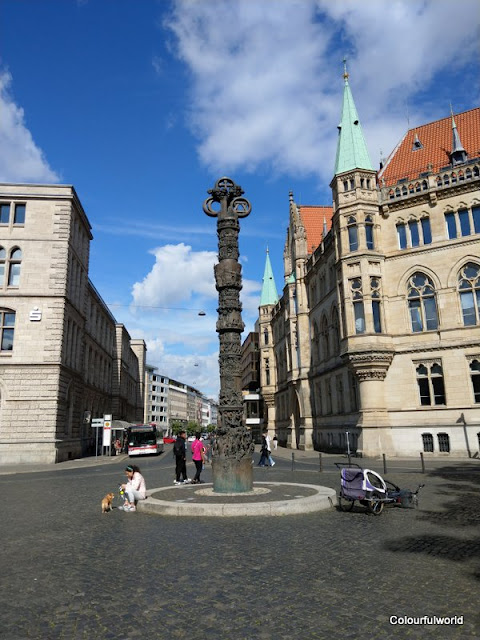 We passed by this entrance with the green wall behind it and I thought it was so pretty... (I think it could have been in the Rathaus) 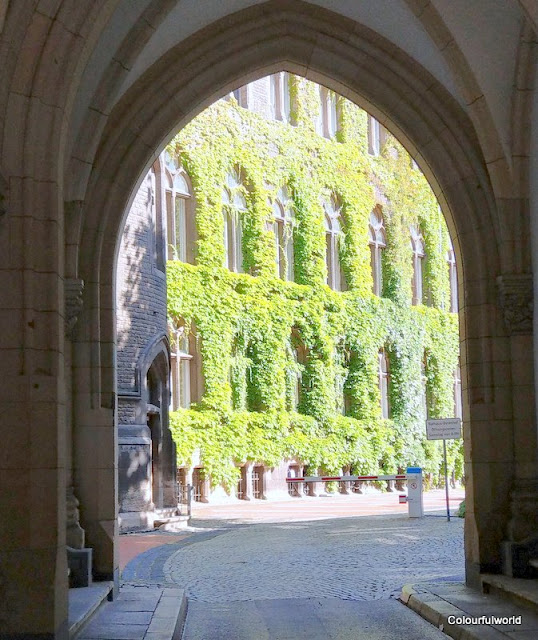 The Braunschweig Castle - the former residence of the Dukes of Braunschweig (Guelphs), burned down in 1830. During the war the replaced palace was heavily damaged and was demolished, and from the 1960's to 2007 there was a park in this location. The palace has since been reconstructed in its original size with the help of old plans and historical photos. Behind the facade is the Schloss Arkaden, a fancy shopping centre with about 150 shops and restaurants. 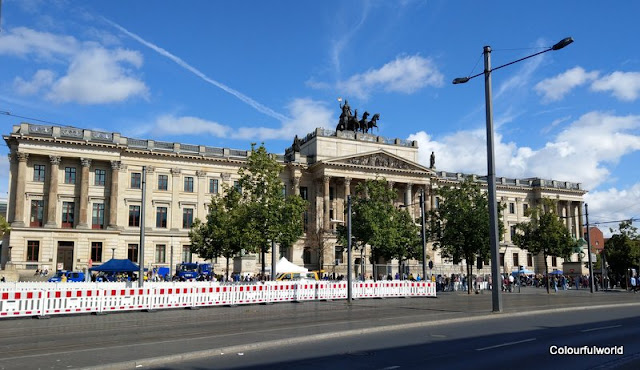 Flanking the entry to the palace are two equestrian copper statues - Dukes Carl Wilhelm Ferdinand von Braunschweig (1735–1806) and his son Friedrich Wilhelm (1771–1815). Both dukes fell as military leaders in the Napoleonic Wars. These statues from 1874 returned to their original location, on the reopening of the residence palace.
Since in Summer the sun sets so late, after walking for hours we decided to go and have a drink at Soldekk, a roof top bar on top of a garage with great views of Braunschweig and beyond.
A beach sand area, tents for events, alcohol and alcohol-free cocktails, and a fun and relaxed atmosphere.  We spent about half an hour relaxing in the sun, although it was a bit windy up there. 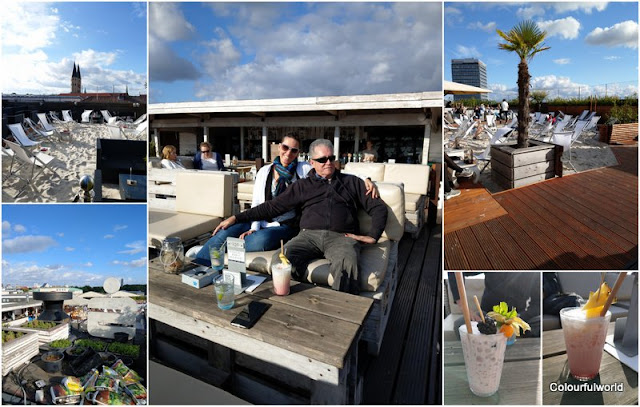 We ended the day with dinner at a Turkish restaurant we saw on the way to the Airbnb - Ocakbasi 64.  The food was great, and the staff was friendly. 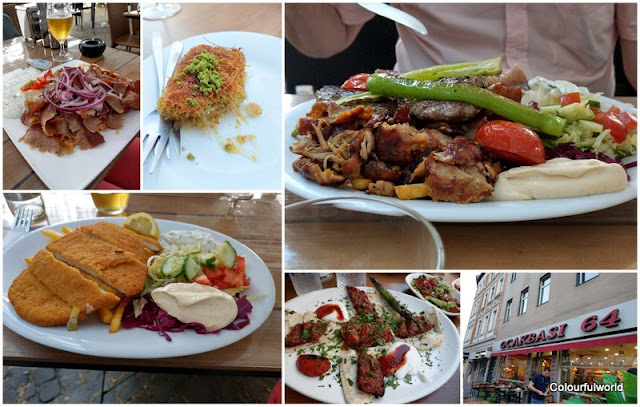 A beautiful building near the restaurant - the former post office.
DAY 2
We had breakfast at a nearby coffee shop, then took the bus to Wolfenbuttel, (30min) to show Karina the hospital where she was born.
Wolfenbuttel was largely undamaged during the war and still has Germany's largest concentration of timber framed buildings dating back a couple of centuries.
It is also known for the internationally renowned Herzog August Library , one of the oldest in the world with over 900 thousand books, of which 350 thousand printed between the 15th and 18th century. Sadly our time was short so we didn't visit anything else here.
I have to admit I couldn't remember what the hospital looked like, so once we arrived at what I thought was the clinic (which I knew had closed) we posed in front of it and took photos. A lady peered out of a window and we asked her if that was the former hospital and she said that it was the building behind and said we could take the side path to the back. There we took photos of the hospital which was converted to an apartment block. 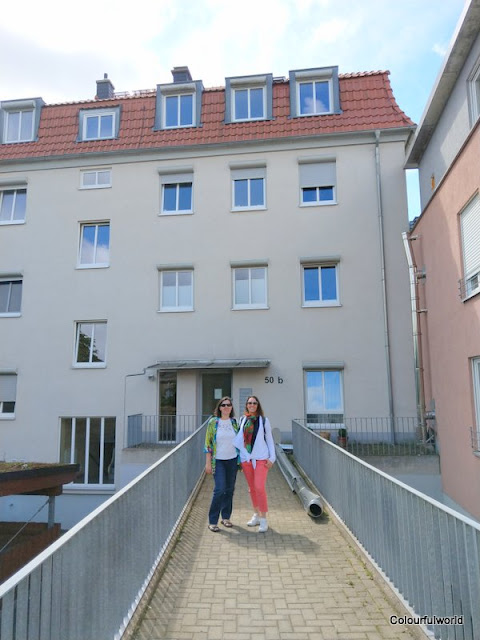 The former women's clinic now an apartment block in Wolfenbuttel

We walked back to the main road, caught the bus back to Braunschweig and walked to our first apartment - a large studio in the USA apartments building - I think it might have been the only high rise then, hence the name.
The building is now empty as few years ago it was found to have foundation problems. From there we caught a bus to our third apartment in the suburb of Heidberg on the outskirts of the city. We had moved there once our son Michael was born as the second apartment on a third floor loft became too hard to climb with 2 tiny kids.
The third one was on the ground floor, also two bedrooms and there was a kindergarten just metres away and plenty of grass in the front and back for all the neighbourhood kids. The building had been painted, the kindy was still there.
Then we caught a tram back to the city, walked to our second apartment in Ranke Strasse, a cute two-bedroom loft apartment.

After lunch Iris and Ingo met up with us at  "Henry the Lion" statue, which was sadly under wraps. Then we walked around admiring some buildings in the city while Ingo gave us some background history.

On the south side a the half-timbered old customs house, attached to a warehouse where the Old Town’s dressmakers would store their goods.

And just like in the old days there’s a daily market on the square, where about 50 stalls sell fresh produce, bratwurst and shish kebabs.

Other buildings and statues around Braunschweig:
House of the Seven Towers - represents the prison of the seven towers in Constantinople.
According to one of the many legends surrounding Henry the Lion , a companion of Henry the Lion, whose name is unknown, is said to have been imprisoned in the "prison of the seven towers" in Constantinople on the pilgrimage in 1172 to the Holy Land. "If I ever get out, I'll build a house with seven towers," was his vow.
Marien Fountain - Reconstructed 1408 lead fountain featuring 3 tiered basins crowned by a Gothic tabernacle.
Gewandhaus (cloth merchants’ hall) - built in 1590, now used by the Chamber of Commerce. 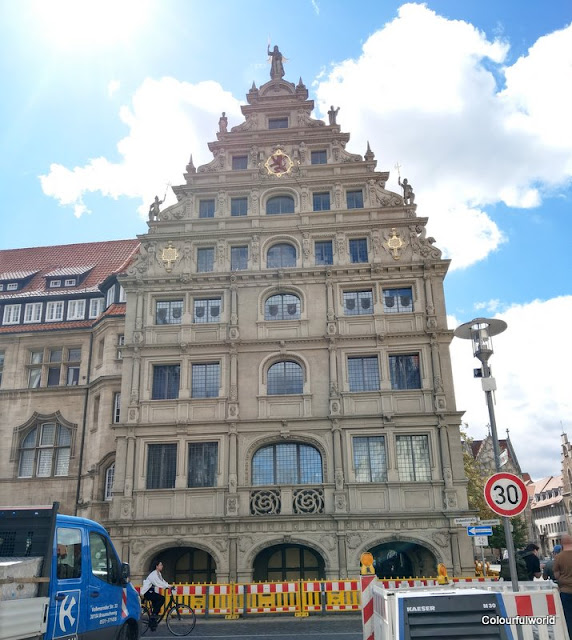 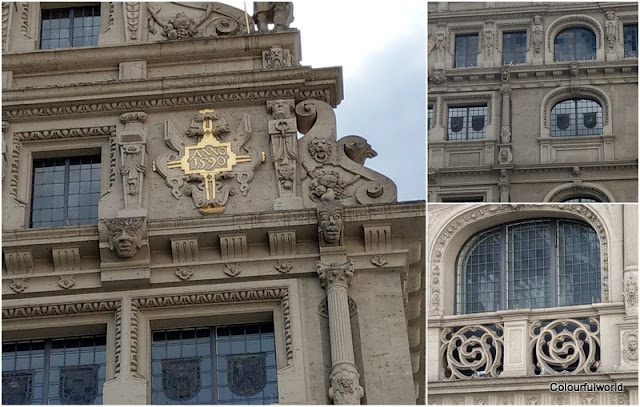 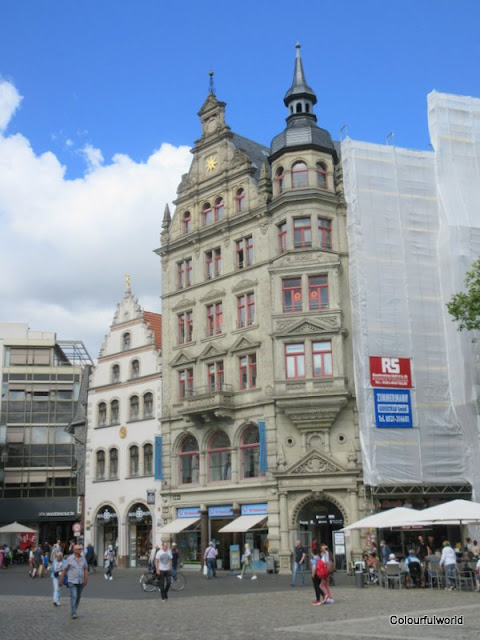 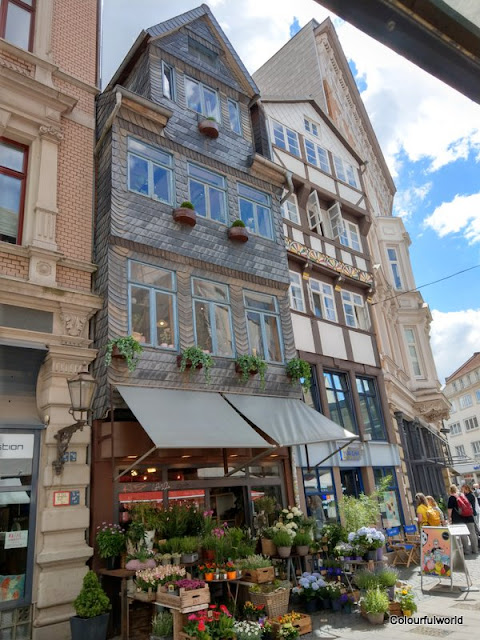 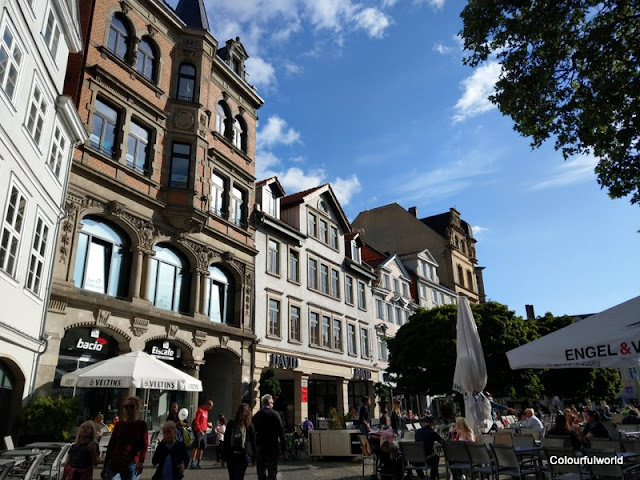 In a pedestrian zone a fun statue was built in 1981, called "Katzenbalgen" (cat bellows), with a variety of bronze cats in different poses on a column.
It's dedicated to homeless cats and to remind people to be kind to animals.
The idea might have been inspired by the name of the street "Kattreppeln" (cat stairs) which has the word cat in it...

And it was time for a last coffee with Ingo and Iris, and to say goodbye at the door to the Airbnb where we had been allowed to leave our luggage.
We then wheeled our suitcases down a street or two and climbed on a tram towards the station for our trip to Berlin.

From the train station platform we could see the Siemens building where Jose worked a long, long time ago... 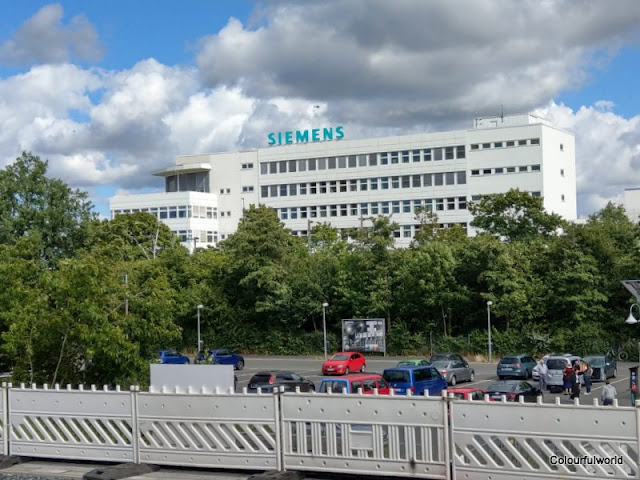