Please check other Signs from around the world at Tom's blog.

We woke up early, took the underground train and reached our destination about 20min later. We had breakfast at a nearby Cafe, then walked a short while to Parizer Platz (Paris Square) in the historic centre of Berlin, where the famous Brandenburg Gate is located. 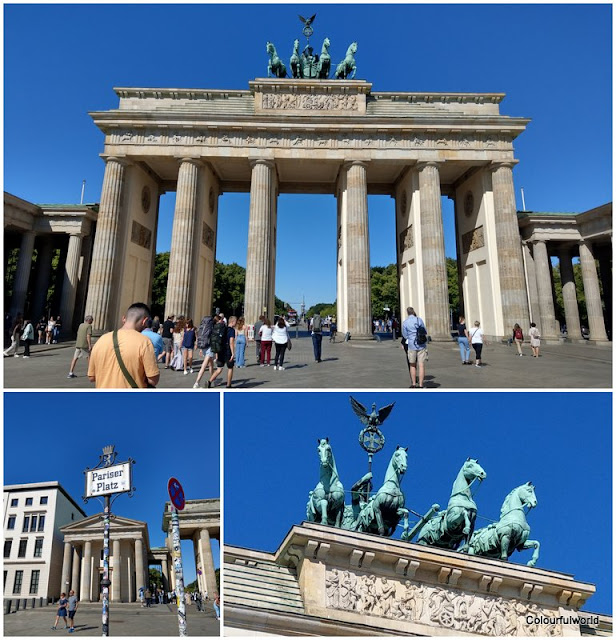 The square is surrounded by lots of Embassies, the most expensive hotel in Berlin (the Adlon Kempinski Hotel), the Academy of Arts and apartment/office buildings.

Apart from the Brandenburg Gate everything around the square was turned to rubble by air raids during the war. When the city was divided by the Berlin Wall, the area where the Gate was fell under the "death zone" dividing the cities.

After the city reunited in 1989, the area was reconstructed, and the square was once again turned into a beautiful space. Looking at all those buildings around the square you would think they had been there forever...

We had booked a tour with Walking Tours of Berlin, and this was the meting place. After the guide and all guests introduced themselves, we were ready to go.

To our left was the Deutscher Bundestag (Parliament) with a glass dome at the top with a 360-degree view of the surrounding Berlin cityscape.

There is free admission to the dome for the public, advance registration is required with ID/passport details. Sadly we didn't book and didn't have our ID's with us to try and see if we could get in when we were there. 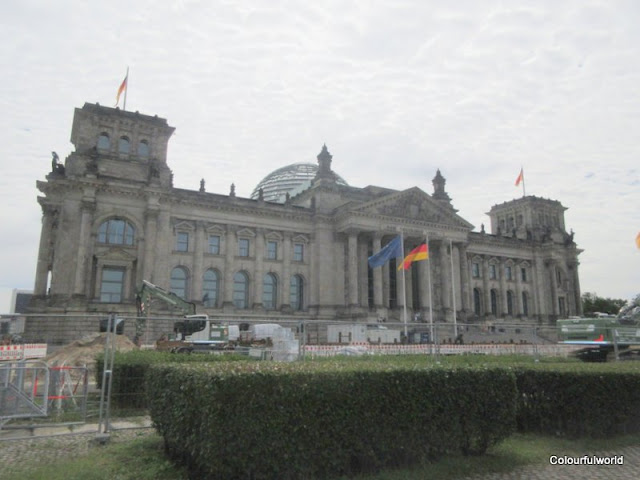 To the right of the Brandenburg Gate we walked through the Memorial to the Murdered Jews of Europe. It's a 19000 sqmt (200,000 sqft) site with 2711 concrete slabs arranged in a grid pattern. It was inaugurated in 2005, sixty years after the end of the WWII.  The area where it was built was also part of the "death strip" that once divided the city. Nearby, under an apartment building parking lot was what once was Hitler's bunker. 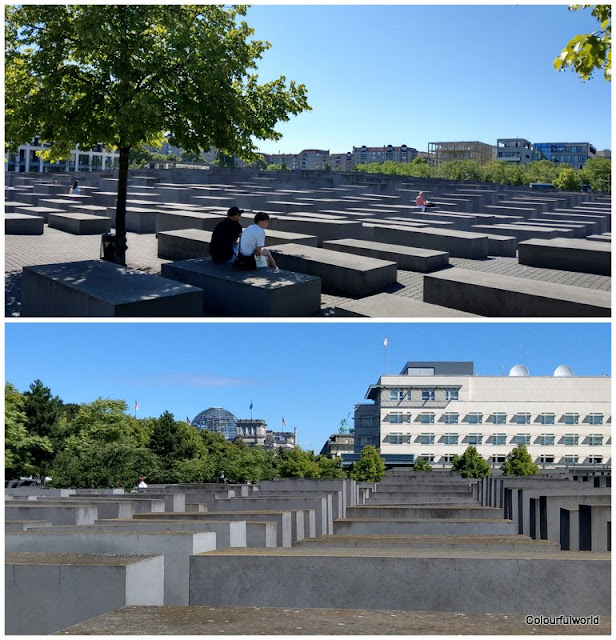 Next we walked to the Federal Ministry of Finance (Bundes Finanz Ministerium), in Wilhelm street, a very austere building which was formerly the Air-Ministry headquarters. 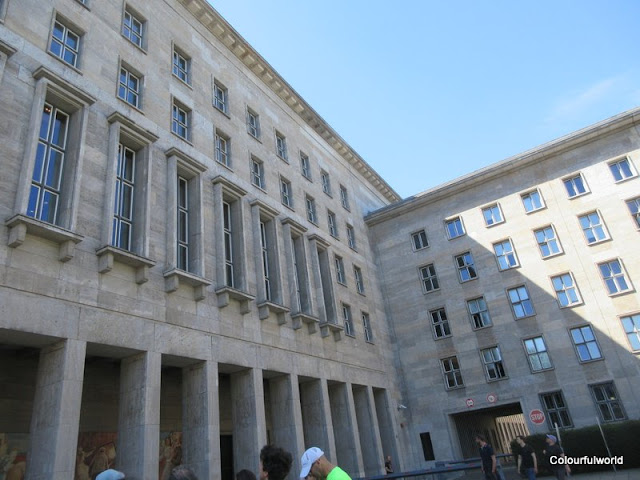 A few minutes down the road there was an open-air exhibition called "Topography of terror", with photographs, graphics and documents, set along part of the longest surviving section of the Berlin Wall, to which the 3 of us returned to later in the day. 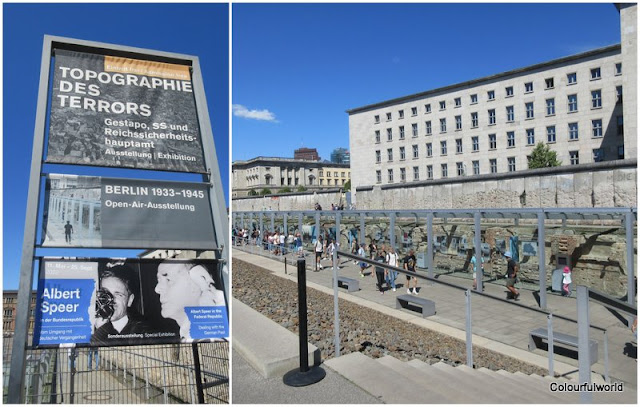 Across the road was this huge "Die Welt" balloon (a national newspaper) and next to it the Trabi World, a tour company that offers guided tours of Berlin in Trabant vintage cars (cars from the DDR). 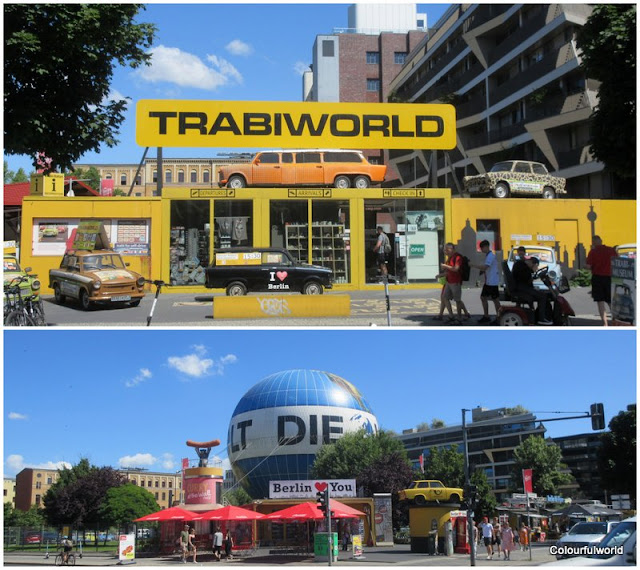 We reached Check Point Charlie, one of the most famous Berlin Wall crossing points between East and West Germany, during the cold war (1947-1991). 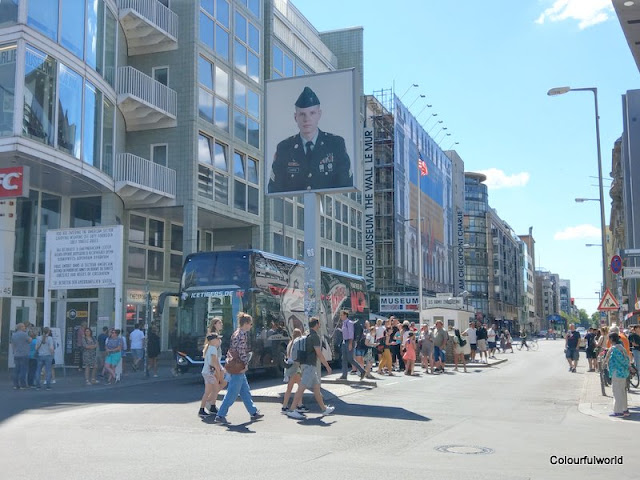 After an explanation about the check-point, we walked on for a couple of blocks until we reached the area called Gendarmenmarkt, known for the Berlin Christmas markets, and across from it is the identical French and German churches, dating back to the 17th century.
And this where we ended our walking tour of Berlin, and our friendly guide departed with our cash donations.
We stopped for lunch at Vapiano - a German franchise restaurant offering Italian food (just a block away from the Wall Museum). 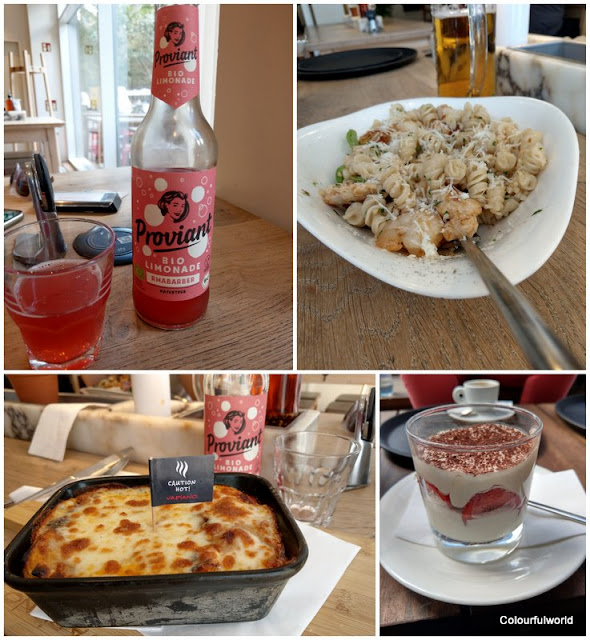 After lunch we returned to Check Point Charlie, to visit the Wall Museum in Friedrich Street. This is a private museum created to document the so called "best border security system in the world". Entry costs €17/Adults which is quite steep.
The exhibitions shine a light on the many stories of pain, loss and courage of the hundreds of people that attempted to flee East Germany, and history of the cold war. Descriptions can be read in German, English, French and Russian.
There is probably a bit too much in the 3 or 4 floors of the Museum, and towards the end I was getting a bit tired of all the walking and standing.
After the visit to the Museum we walked 15 minutes to Postdamer Platz, to climb to the observation deck of Panoramapunkt to experience the stunning views over Berlin. You buy your 9,00 € ticket, then get into the fastest lift in Europe that takes you to the top in 20 seconds! You can also read a lot of information about the history of the square as you walk around the platform, and you can end your visit with a drink at the bar on the 25th floor.
Postdamer Platz had in the 1920's the first traffic lights in Europe and was Berlin's busiest area with traffic, shopping and entertainment. After WW II the area was in ruins and lay lifeless in the "death strip" between the divided cities until 1989. After the fall of the wall, international investors and international architects brought about its resurrection, and nowadays it's one of Berlin's trendiest places. 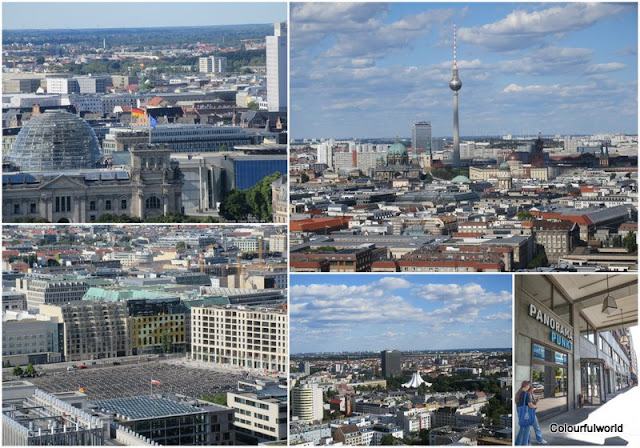 I even spotted a mural from high above, but we had no time to wander around to search for it...
The tower closes at 7,30pm in Summer, but we had a dinner booking at 8,00pm at Schnitzelei Restaurant, at 8 Chaussee str, so we caught the underground and then a tram to the area. The restaurant is very popular and as the name indicates their speciality is schnitzel, and they have two sittings per dinner, so bookings are essential.
Karina had mentioned her boss was also in Berlin with his wife and kids, and we were halfway through our meal when he walked past and was surprised to see Karina. What a coincidence to meet up in such a huge city! 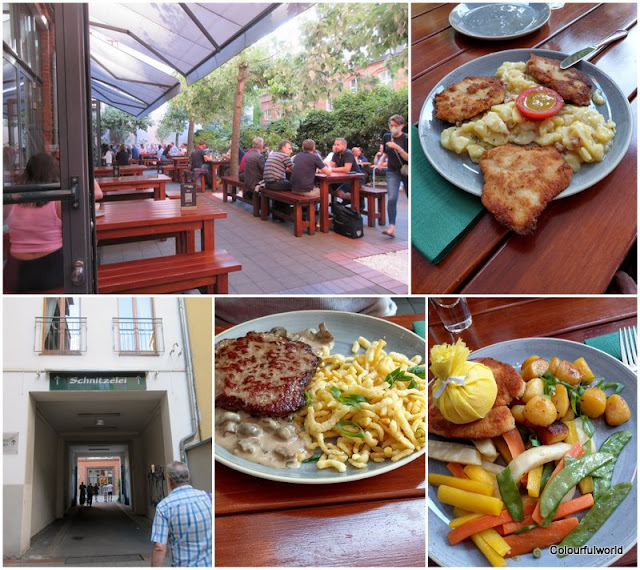 After dinner it was time to take the tram back to our hotel for some rest, as we had another full day the following day! 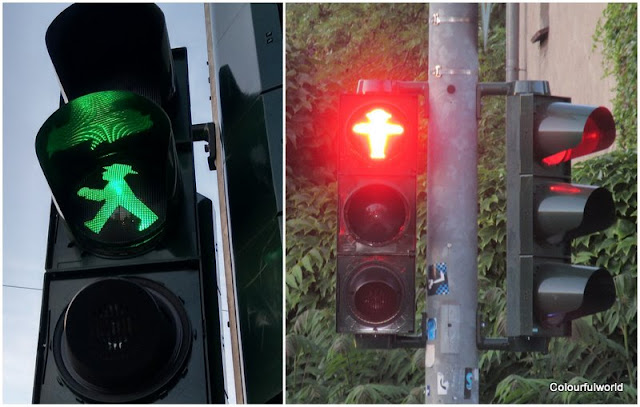 The cute and different traffic lights that we saw in Berlin
Posted by Sami at 00:01