May Wrap-Up and Signs

On Thursday 5th, Jose and I went to a movie premiere of the hilarious film "How to please a woman". It was filmed in the suburb of Fremantle with mostly Australian actors. The main actress is Sally Phillips, a British actress which I had last seen in the movie "Off the Rails" in March.

I don't think I had ever seen a movie house so so full of people and such a vibrant audience that clapped, laughed and cheered all the way to the end.

Before the session started Jose managed to get a box of nibbles that was being given to the audience, and he bought 2 glasses of wine. There was a short presentation and at the end no one left the cinema until the end of the "Question and answer session" with the Australian producers Tania Chambers and Judi Levine, director Renée Webster and one of the main actors Hayley McElhinney, who is actually from Perth, and which I knew mainly from Australian TV series. 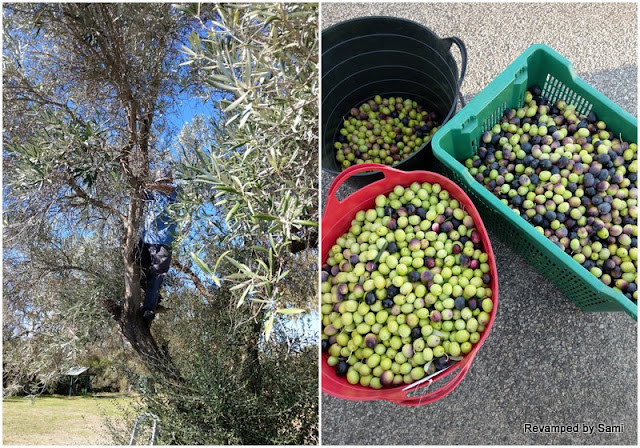 In the evening we attended Mother's Day dinner at the Portuguese Club. Dinner is free for female members.

Monday 10th - At work, the receptionist who had been there for just 8 weeks didn't show up to work during 2 days and no message or phone call to justify. Eventually after many calls and messages from our end, she messaged the boss to say she was resigning!

That is now the third receptionist that leaves within the first couple of months, and with the huge lack of workers around, I'm getting worried that by the time I go on my overseas holidays we will be down to 3 staff members when we used to be 5 or 6.

The following day one of my colleagues who had just returned from a short holiday and was meant to start back at work on the Wednesday, called in sick with Covid, plus one of the Doctors was diagnosed with covid too! So you can imagine how crazy it got!

Friday 13th - Two members of the "Community Harvest Group" came to my house and we loaded our cars with the buckets of olives and drove to and olive pressing place - Tarralea Grove in the suburb of Jarrahdale - 45 min south-east of Perth in the Darling Ranges also know as the Perth Hills.

Just as we rounded the corner from my house, the passenger window dropped into the door with a loud bang. We returned home and with some semi-transparent plastic and tape I covered the window and off we went hoping it was enough to drive all the way there and back and hold up against the rain threatening to fall from very dark skies.

As we were having lunch it started pouring, luckily I had put the plastic to the outside of the window, so no rain got inside.

After weighing the olives we were surprised we had 109kg (240lb)!  The lovely couple invited us to check the start of the olive oil process, then the three of us went for lunch and returned 90min later to pick our cold pressed olive oil - 15,5lt  (4.09 gallons) of it!  The oil is now in a metal canister we brought from Portugal, where we used to put the home-made olive oil we would buy every year. It needs to stay there for 6 weeks and then can be decanted into bottles.

Saturday 14th - I took my car to a windowscreen shop, where a friendly chap managed to pull up the glass, put some rubber stoppers at the bottom, ordered the part and sent me on my way.

I returned on Monday after work, to have the new part installed and it just took about 1 hour. 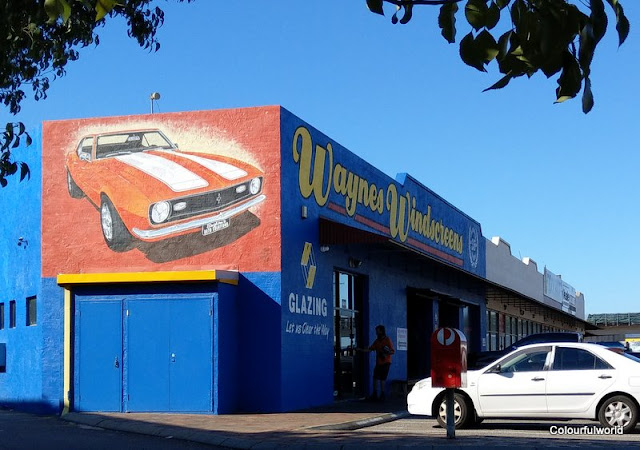 Friday 20th - Met up with Grace , (who some of you might know from the "Perth daily photo" blog) at Ikea for lunch and a chat. While having lunch a Portuguese friend of mine who I hadn't seen for a couple of months walked past and we asked her to join us, and we had a lovely time.

Saturday 21st - The dinner/dance event for the election of the WA Portuguese of the Year - to be held at the Portuguese club was cancelled due to a lot of guests having Covid. It has been postponed to mid August.

Sunday 22nd - Federal elections, voting at the local school. Voting is compulsory and this year they even had "telephone voting" for those at home with covid. 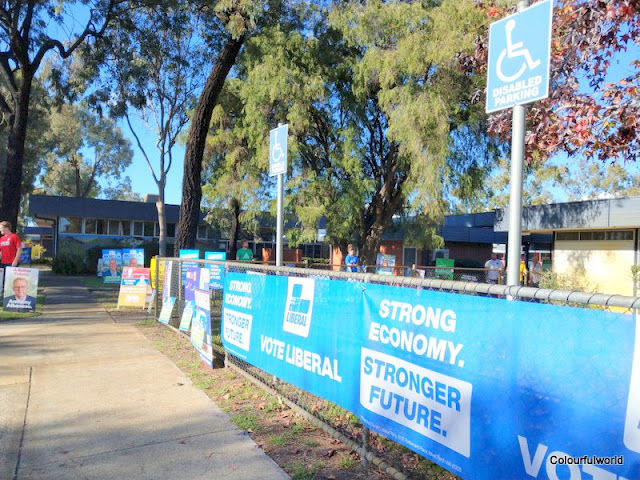 Thursday 26th - we went out to dinner for the first time to a Korean restaurant not far from us. It is a BBQ style restaurant - you got your meat, chicken, prawns, calamari, either raw or marinated and grill it at the table grill. There were various salads, rice, potatoes and other accompaniments. To end the meal we helped ourselves to ice-cream and fruit and a few small cakes. 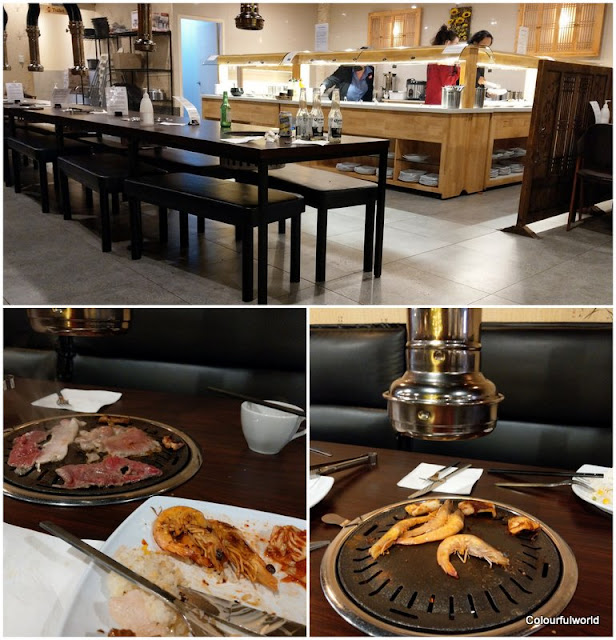 One of our female Doctors/friend who was going on holidays, gave me and another colleague a bunch of sunflowers to thank us for our work. So lovely to feel recognized for a job well done. 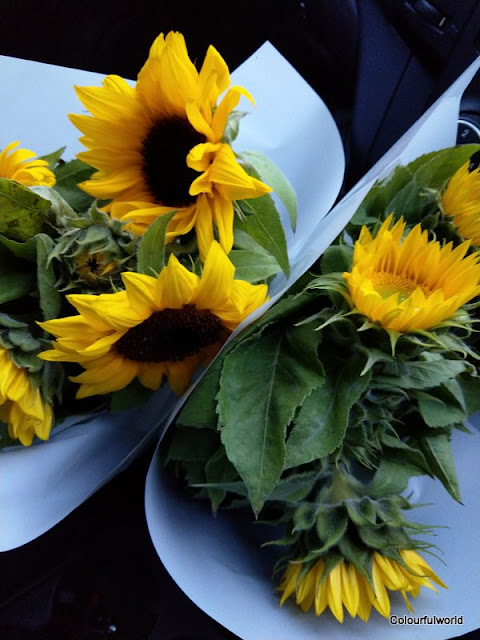 I finished two furniture projects and have started a big one...
A plain white bedside table now sports a jeans like style paint and a 1950's sideboard that I started painting in January was finally done. 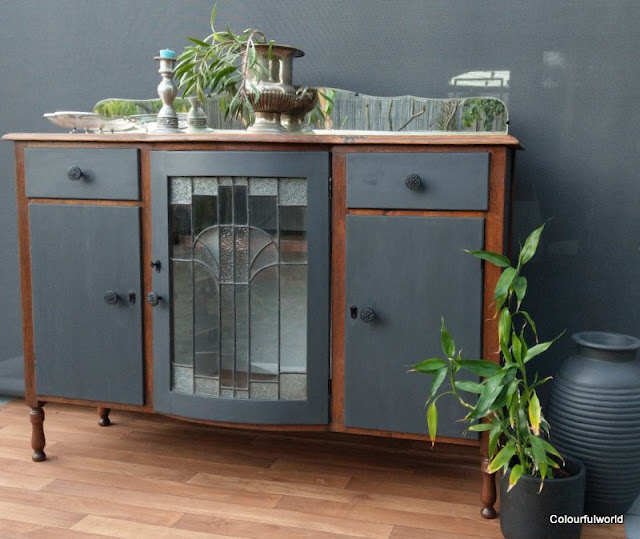 I also upcycled a bicycle that was "verge shopped" - the handlebar had a bit of rust and I spray painted it silver and the beige bits were painted in black. Looks more modern now I think. 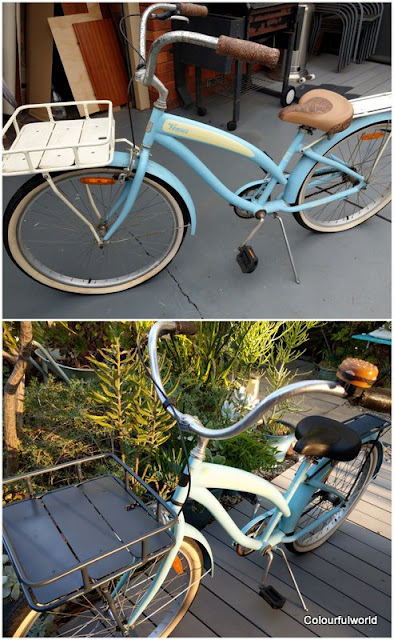 Until the last week of the month we have had great Autumn weather with temperatures up to 26C (78,8F) with a few rainy days here and there. But of course at night the temperatures drop and Twiggy loves to snuggle under a blanket. 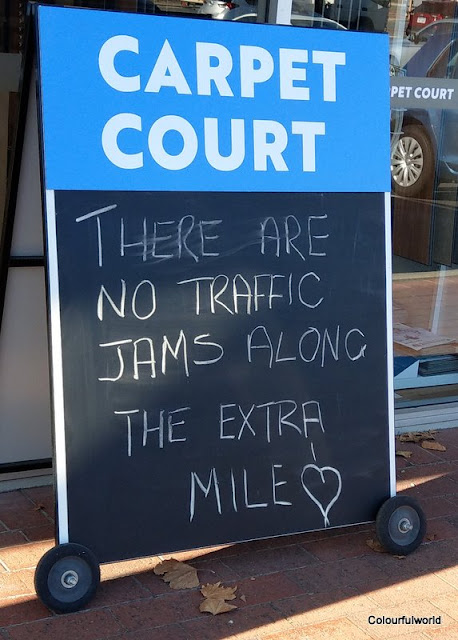 Trailer of "How to please a woman". Enjoy it 😉