Can you believe I forgot the blog's 10th anniversary on the 18th June?  Such a memorable anniversary and it slipped my mind! 😉

Friday 2nd - Perth's 5 day lockdown was lifted, but use of masks outdoor and at work and public transport until midnight Monday 12th. Luckily only 3 or 4 people were infected.

On Tuesday 6th - We had accreditation at the Clinic.  We just need formal staff appraisals for it to be a 100% pass.

Friday 9th - my day off work I had a haircut, then went to the supermarket. As I got into my car to return home, I was caught in a massive downpour and even though I just had a 10 min drive I had to drive super slowly as I could hardly see. We had a bad storm with 45mm of rain, inundated roads, a sink hole in Subiaco, fallen trees...

Sunday 11th - visited our friends W and L who were renovating an investment property they own in the inner-city suburb of Subiaco. They've turned an old double storey townhouse into a modern residence. We had coffee with them at a nearby Cafe, then walked around a bit and came across a lot of shopkeepers putting sand bags in front of their shop doors. On Friday, during the storm, Hay street, the main street in Subiaco been inundated, and another storm was predicted for Sunday night (which luckily didn't happen) hence the precautions.

Came across a few murals which I had photographed years ago but not yet posted, so just took new photos.

Wednesday 14th - Bastille Day -the French class group and partners went to the Duke of George pub in Fremantle. Sadly the teacher and her husband couldn't come as her husband had burned his hand badly 2 days before, when he switched off the Thermomix and it exploded with hot soup. He was going to hospital the following day for a skin graft to his hand.

It was a fun night with a British jazz singer Catherine Summers, who had lived in Paris in her childhood. She sang a lot of French classics from Edith Piaf, Ella Fitzgerald, etc.

Friday 16th - I picked up my retired colleague Gill and we drove to Baldivis (about 40min from me) to meet up with our other retired colleague Jan at Brother of Mine Cafe. Great food and service, beautiful newish residential area, and always nice to catch up with them.

Sunday 18th - Annual General Meeting of the Perth Codfish Academy, at the Yangebup Bowling Club.  None of the participants volunteered for the committee roles, so the committee members stayed the same, Jose being re-elected the Treasurer, and the Secretary nominated me for the job.

After the meeting lunch was served by the local "Bowl and Fork".

On the way home we dropped our elderly friend Idalia at her retirement village, then drove to Point Walter Reserve, nearby. Jose was hoping to have a coffee overlooking the river, but sadly the coffee shop was already closed.

It was quite windy, but a couple of youngsters were being pulled by a boat on their board. Quite a few falls... 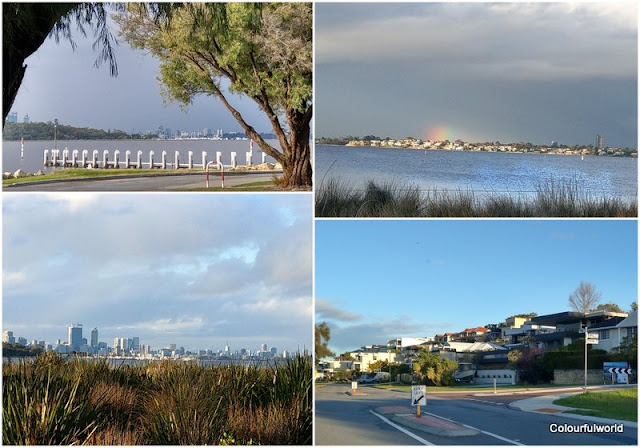 From Point Walter you get great views of the city across the river Swan and we even saw a rainbow 🌈. It's a very affluent area with million dollar houses with river views.

Just before going home, I photographed "Spirit" - the life-size statue of a man with a dog on a lead, surrounded by a bevy of playful dogs, all made of powder-coated aluminium, created in 2018 by April Pine for the Sculpture by the Sea, in Cottesloe  . 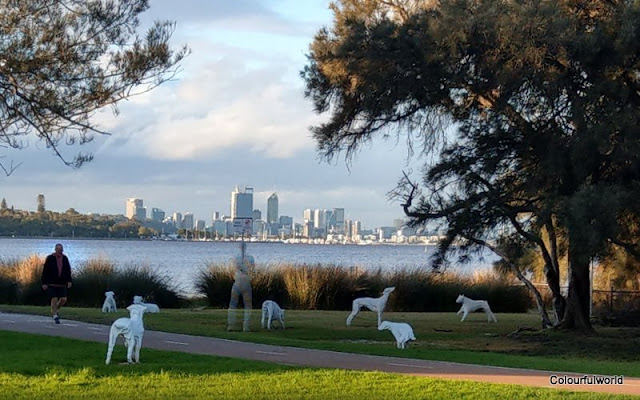 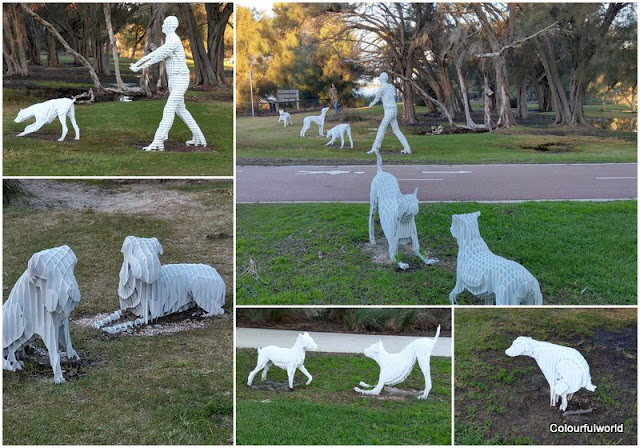 Sunday 25th -  Christmas in July, organized by the Portuguese Association Women of WA.

A few days before I was reminded that Jose needed a Santa suit as I had volunteered him to play Fathers Christmas.  They suggested I hire one and the Association would cover the cost, but I thought it was quite expensive and decided to go to a few shops that might have that type of thing. Sadly this year they didn't carry "Christmas in July" merchandise. I also tried 3 of the nearby op-shops (thrift shops), but nothing either...

I decided to ask my "Faceboook Buy Nothing group" if anyone had a Santa suit to lend me, and someone actually offered me one, as she had two.  How good was that?

I baked a Chocolate Christmas log cake to add to other desserts donated by some of the members, and the Association ordered 2 kgs of mini custard tarts from the Portuguese bakery, which I picked up as I'm the one living closer to it.

The lunch was a success, even though we had half the people we had last year. There was music, dance, good food, face painting for the kids and Santa surprised the kids with gifts.

At every one of our events we also collect for a cause. This time we asked guests to bring a gift for a child in East Timor. We also asked if guests could donate a handbag and put a few care products inside, as well as a scarf or necklace to donate to young ladies in East Timor as well.

I actually bought 5 bags, scarves and necklaces at one of the op-shops (thus helping 2 causes) and filled them with a box of sanitary pads, small bottle of shampoo, and body cream.

At the Op-shops I also bought a few other goodies - a bedside table ($10) and a swinging doll's crib ($8) to be painted. 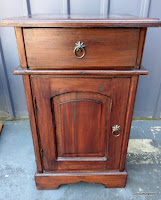 Friday 30th - spent my day off work, finishing off a few pieces of furniture. Had to bring them indoors, as it was another rainy day. Luckily the "Fusion mineral paint" is voc free, so no problem painting indoors.

Saturday 31st - On Friday I had heard a strange running water sound which I had put down to rain falling from the gutters, but Saturday the sound was still there when I was in the laundry putting the washing on. I told Jose about it and he went outside to investigate, turned the water off, and the meter was still going....so guess what?  Leaking water pipe. He lifted some pavers from the side of the house leading to the water heater and then notice that close to the heater there was water coming out from underneath!  Main water turned off, then he had to break the cement to get to the pipe.

Then followed a search on the net for the pieces and tools he needed he was looking for.  It was too late to go to the shops on Saturday, so only on Sunday he managed to go to the local Bunnings (hardware store). Due to lack of stock he had to drive to 5 hardware stores as their website showed stock in some shops but when he got there, nothing!  Finally the leaking pipe was fixed, water turned on, heater had to fill up and warm up, and then we could finally have a hot shower again on Sunday night!  Never a dull moment! 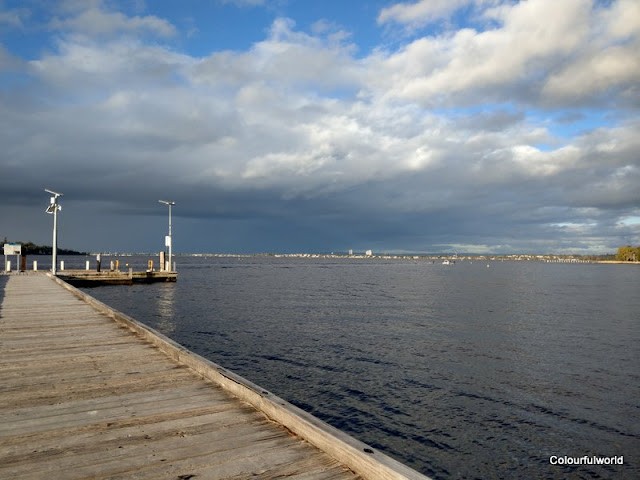 With 271mm of rain, July was the wettest month in 26 years, and with 28 consecutive days of rain making it also the most rain days in 75 years and only the lowest sunlight averaging just 4 hours per day!