On Saturday, 8th June, our second day in Berkeley Vale, I drew back the curtains and peeped out to the cosy patio when I got up, to find 3 cats staring at me. When I opened the patio door, two of them ran away and hid under some bushes, but one accepted my pats.


We showered, had breakfast and left the house for our day trip around the area.
It was a gray and wet day, but our first stop - Shelly Beach, was full of surfers.
On to the next beach, Toowooon Bay just to see the views.


Back in the car, we drove further north to Norah's Head to visit the lighthouse.

It was the last lighthouse to be built in State of New South Wales. It has a 27 metre (89ft) high tower, and was completed in 1903, with funds from Edward Hargraves, an English born gold prospector who bought land in this area to build his residence, Norahville.
After a considerable number of shipwrecks on "his" coastline he decided the area needed a lighthouse.

I'd never climbed to the top of a lighthouse, so for a $6 entry fee I joined a small group with a lovely elderly gentleman as the tour guide, who explained all about the construction of the lighthouse,  the numerous shipwrecks in that coast, and the jobs of the keepers, who had to be men, married and short.

We climbed the 96 narrow steps all the way to the top, going past the window with the red light and then further up to where the optic prism light is located, and climbed out onto the surrounding balcony to enjoy 360 degree views of the spectacular coastline.

We learned about the duties of the lighthouse keeper, how the light was originally moved by
kerosene that the keeper had to carry all the way up. The lighthouse light has been electrified
since 1961 and automated since 1995.
Before then the 700 lenses of the optic prism also had to be regularly cleaned due to the
kerosene fumes.

The former Lighthouse keepers cottage has been converted into two fully equipped 3 bedroom
cottages for holiday rentals, and the lighthouse is also popular for wedding parties. 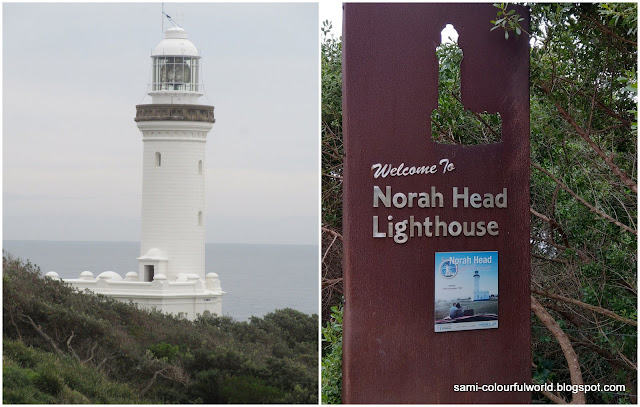 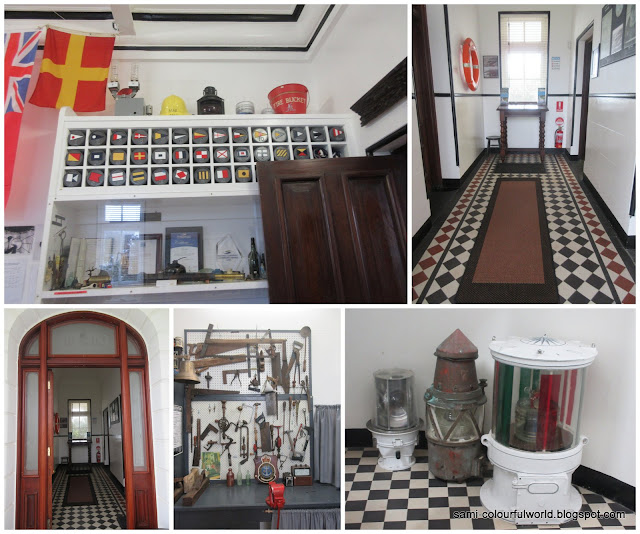 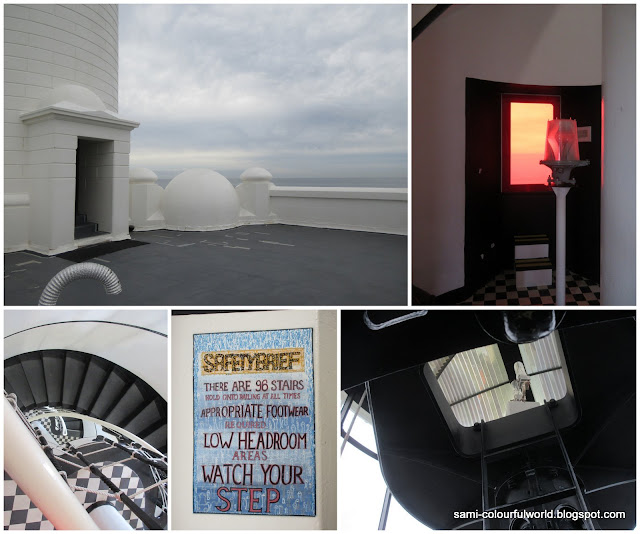 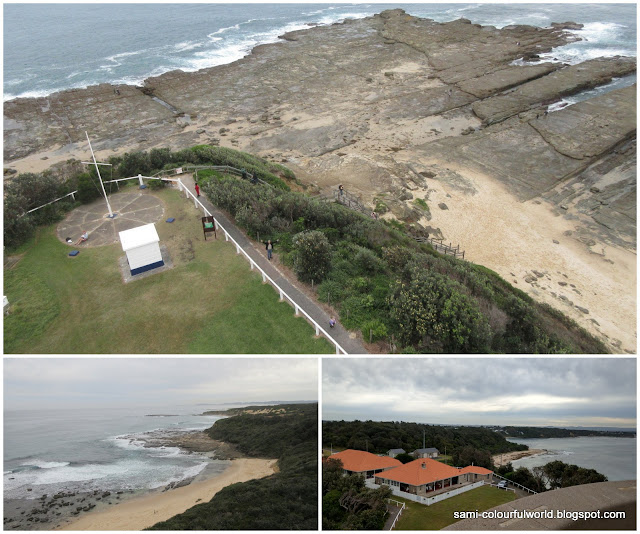 Views from the lighthouse balcony. You might spot Jose  in a black jacket waving to me to the right of that white shed 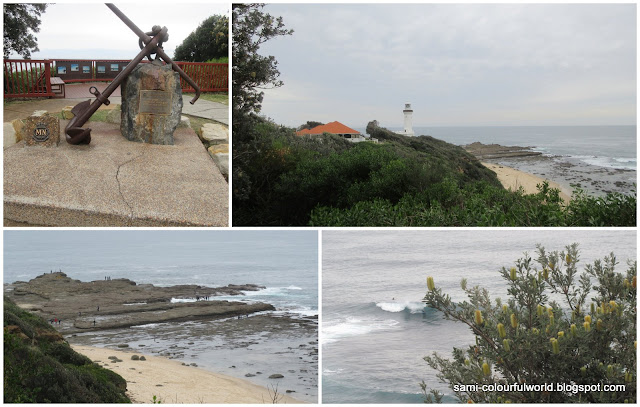 When we left we drove back to The Entrance about 15 min away to watch the Feeding of the Pelicans held at 3,30pm at Memorial Park. The town of The Entrance is  known as the Pelican capital of Australia and the town gets about 200 thousand visitors keen to watch this spectacle. 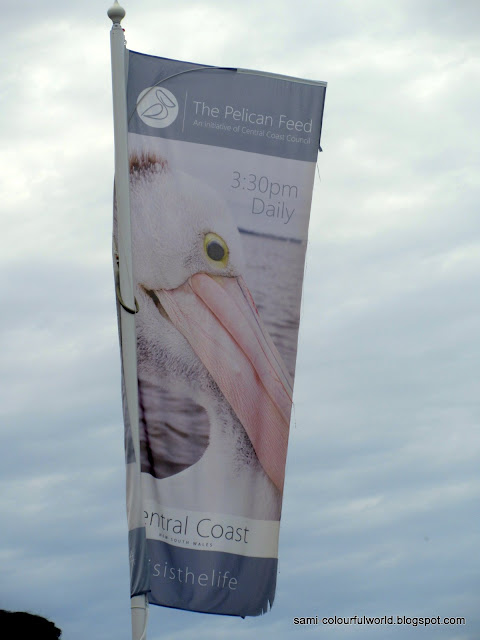 We arrived half an hour before and there were lots of birds already waiting near the shore. Closer to time they started making their way to the feeding platform.

The feeding started in 1979 when a guy who worked at Clifford's fish & chip shop started feeding them during his lunch break. The birds soon got used to it and if he was late they would waddle across to the shop and wait.
Later the town management took over the feeding with the help of sponsors and donations. During the 30 minute show they also collect donations and sell pelican soft toys. 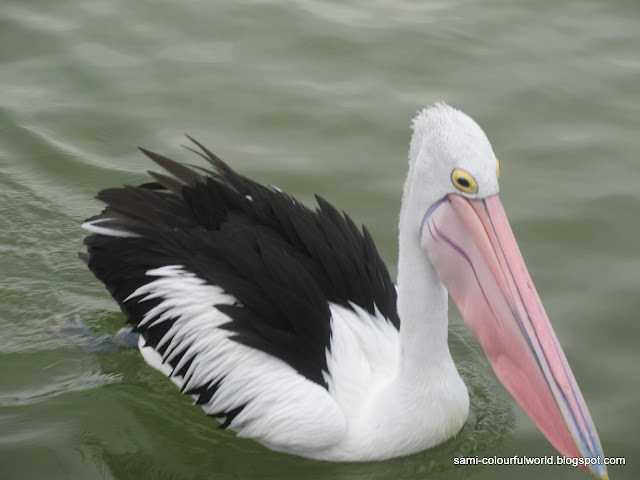 We managed to get a front row seat and noticed the birds weren't scared of the tourists.
Jose was sitting next to the gap where the feeders walked past, and a couple of pelicans would come and go following the feeding lady, flapping their wings and trampling on people's feet.

The volunteers who feed them are also on the lookout for pelicans injured by fishing line and tackle.
The volunteers explain facts about the pelicans, such as: the Australian Pelican is the only species found in Australia (there are 8 different ones around the world), is also the largest and has the longest beak. It can hold 13 litres of water and they need to eat 1 to 2kg of fish/crustaceans/frogs a day.
They weigh about 4 to 8 kgs (8,82 to 17,64 pounds), and can glide on thermals as high as 3000mt for about 24 hours and can travel hundreds of kilometres.
There are about 300 to 500 thousand pelicans in Australia with about 500 living in this area (Tuggerah lakes) and about 80 coming to the daily feeds.
The ones who attend the feeding don't migrate as they get free fish year around 😉. Clever aren't they? 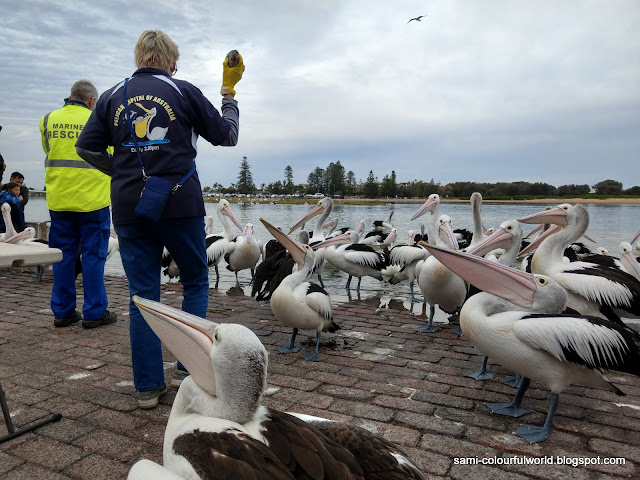 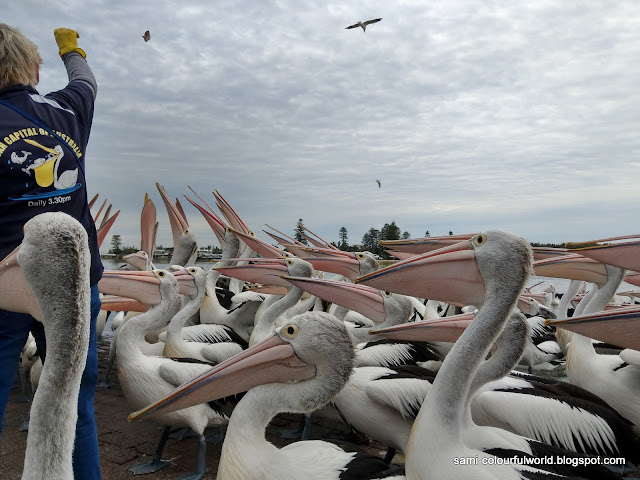 After the show we went across the road to the Fish & Chips shop for an early dinner (or very late lunch). There was a long queue so we presumed the food was good, while the fish & chip next door was empty, so we ordered a mixed seafood basket for both of us, but were disappointed with the food.
When we finished we bought an ice-cream cone in a nearby shop.


The sun was setting and we walked back to the parking lot and drove back to Berkeley Vale. 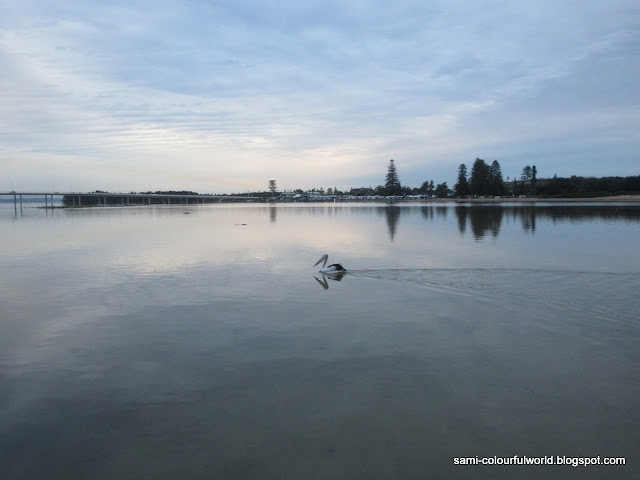 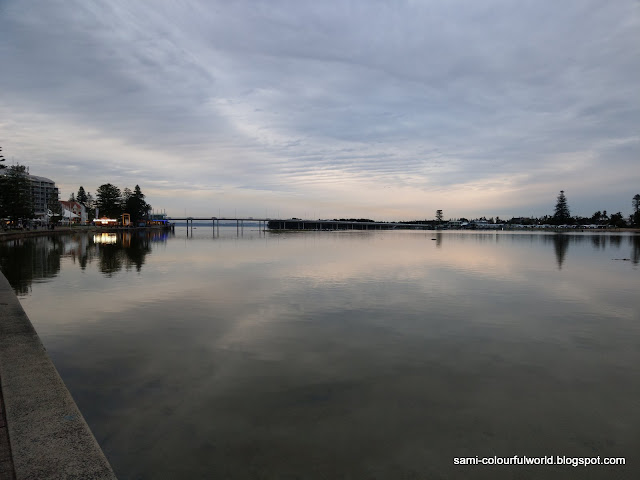 There didn't appear to be anyone at the house when we arrived, and we went into our room, put the heater on and while Jose read his emails I sat in bed downloaded my photos and then read my book.
A few hours went by and we both commented how relaxed we felt, with no tv or other noise in the background, just sitting there quietly.

It was about 10pm when Jose said he was feeling peckish and went to the kitchen to make us a few slices of toast with cheese and a cup of tea, before we went to sleep.


Hope you enjoyed meeting the pelicans as much as I did 💓😊.

FOR OTHER SIGNS FROM ACROSS THE WORLD CLICK ON THIS LINK.
Also joining FELINE FRIDAY and SATURDAY CRITTERS.