Monday, 17th December -  The small island of Panglao where our resort was located is linked to the island of Bohol by two bridges and most of our day tour was conducted in Bohol.
Bohol is the tenth largest island in the Philippines, in the Central Visayas, with 3,300 square kms, 100.000 residents, with 30 smaller islands around it, with Panglao being one of them.

Instead of joining an organized tour, Sunshine (my daughter's wedding planner) had recommended a friend who had a van and could take us around at our own pace.
Before being picked up at the resort, we had time for an early breakfast at the resort which was included in our daily rate.
The buffet at the Aplaya cabana catered mainly for Asian taste buds. As for the few Westerners at the resort we had bacon and eggs, sausages, bread and fruit, and of course coffee and juices. Not bad, but there could be more variety...


In the parking lot by the Reception these two very colourful jeepneys awaited to take hotel residents on tours. Everyone decorates their jeepney or tricycles as they wish, using colour, tassells, curtains, quotes, names...

Reynaldo, our tour guide picked us up at 9am, and after introductions we were on our way to our first destination - the Tarsier Sanctuary in the forest foothills of Corella town in the island of Bohol.

The Philippine Tarsier Foundation administers the sanctuary which is dedicated to the preservation and research of this tiny endangered species. They are the world's smallest primates and are found mostly in the Philippines.

We paid the entrance fee of PHP50 (Aud1,30) and were told to keep our voices down, no sudden moves and not to use flash photography while going around the sanctuary.

Tarsiers, one of the world's smallest mammals range from 8.5 to 16cm and weigh about 80 to 160gr. Their eyes which are disproportionately large provide the tarsier with excellent night vision. The eyes are fixed and don't move in their sockets but the neck rotates 180°.
They can live up to 24 years in the wild, but only 2 to 12 years if in captivity mainly due to stress. Being very sensitive they are known to commit suicide if disturbed by light and noise.

We were told that every morning a couple of trackers would go around the sanctuary searching for tarsiers. When they have located a few, a guide will be positioned near the various trees so he can show the visitors where they are.  We saw 8 tarsiers that day.


Next we drove through the Man Made Forest in the town of Billar.
It's a 2km long stretch of road, where according to our driver, school kids planted mahogany trees on their way to school.  Nothing special, but it's of course good for the environment and makes for a cool stretch of road.


We stopped for coffee at Mayang Maye Carenderia (Carenderia = a food stall with a small seating area, typically in a market or at a roadside in the Philippines).
Just as in most businesses we came across there were lots of staff, some in training apparently, and we were the only customers. Coffee was ordered, and I had coconut water from a real coconut that I bought from a stall across the road.

The restaurant which was quite big, was surrounded at the back by a lush garden, and at the entrance a lot of plants in pots inside stiffened jeans.
When we left we had to laugh as the young waitresses were rehearsing some dance moves to the sound of music.  Even though we came across lots of very simple people, everyone seems to be have a smile on their faces all the time! 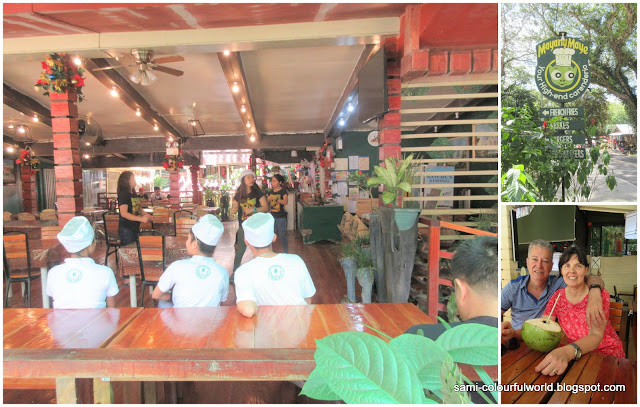 The driver had asked if we wanted to ride Quad bikes at the foot of Chocolate Hills. The men were all for it of course!  I presume the driver/guides must also get a commission from bringing in clients.

We stopped at Chocolate Hills ATV rental on the main road to the town of Carmen.
At the back of the property a big cage with parakeets amused us while the staff prepared the bikes. Some of them would go into the coconut shells and poke their heads out.

After paying for a 30min ride, Isabelle and Max (Thomas's parents) climbed in the only shared bike and the rest of us had single bikes.
After kitting ourselves with plastic overalls (uff, they made us sweat, they were so hot!) we did a trial ride in the property.

It was my first ever ride on a quad bike and I promptly accelerated and went into a small ditch. One of the young helpers said he could ride with me for a while to make sure I was ok which I gladly accepted.

Behind a staff member riding ahead of us we left the property onto the main road and onto a dirt road to the left.
Once in a while we would stop and have photos taken by the staff member. After a while the guy riding with me said I could take over as I would be ok and I managed to do well.

I had chosen not to wear the plastic trousers as they were really hot, Jose chose not to wear any protection, but in certain spots we rode through mud puddles and our legs got splashed.

We stopped at the feet of the Chocolate Hills, Bohol's number 1 attraction to take photos, before returning to the rental place and get our legs spray washed. What fun!!

After our adventure we got back to our waiting van, and debated whether we should go to Chocolate Hills or have lunch first, but decided on lunch.
At the first tiny restaurant we stopped at, the Chef was a bit confused with the "no gluten" request for Isabelle and then didn't have enough chicken for all of us and nothing else appealed to our taste.

We left and decided to go back to the friendly restaurant where we had coffee earlier in the morning.

The young waitresses welcomed us again and we ordered our dishes and the Chef made a plate of vegetables and eggs for Isabelle as nothing else was suitable (she's Celiac).


Reynaldo, the driver joined us for lunch of course and it was funny that even though he had been asked to order whatever he wanted for himself as we would pay, he ordered chicken but then would help himself to whatever else each of us had ordered.
Jose wasn't too happy when he started picking on his plate of prawns 😋.
I suppose that is the family/community way the Filipinos share their meals.

Once in a while one of the young Chinese girls sitting next to our table would come and peer at our table to see what we were eating as they still hadn't ordered.
Jose being cheeky asked one of them if she wanted to eat with us and she said they were just seeing what looked good to order.
Then she wanted to know what nationality we were and then pointing to Benoir, Thomas's brother, she said "uhh, he's good looking".
Jose told her he was single, and she said she was also single and wouldn't mind a French boyfriend. The poor guy didn't know where to hide  😂 😂.

Happy and with our tummies full we returned to Chocolate Hills.
These consist of about 1776 hills spread over an area of 50 square kms (20 sq mi) and range from 30 (98ft) to 120mt (390ft) in height.
During dry season (Summer) the grass covered hills dry up and turn chocolate brown like "chocolate kisses" which give the area its name.
The hills were green when we were there, as it was considered Winter... with temperatures of 28C (82F) !!  I'm sure everybody wants winter temperature like that.


There are 214 steps to the observation deck at the top, but worth the climb for the views.

A line of people waited to take their selfies and then we still had to contend with a "model" going to and fro to one of the corners while the photographer filmed and photographed her in various positions. Oh patience....


On the way home we went past rice paddies and asked the driver to stop so we could take photos of the water buffaloes that people use to plough their fields.

We had earlier talked with the driver about local fruits and he said that on the way home we could stop at the Central Public Market to buy fruit.
While Jose and Karina went through the market searching for fruits they wanted to try out, the rest of us went across the road to Island City Mall.
When we returned from the Mall we "ran" through the market searching for them and were surprised at the huge variety of fish, seafood, vegetables and fruit on offer, most of which I had never seen before.

About 40 min later we were deposited at our Resort, tired but happy with a day full of great experiences.

After a shower and change of clothes we met half an hour later at the Resort's Baroto Bar for our usual "Happy Hour" drink.
I ordered a mango daiquiri, with real mango juice from the resort's mango trees. So delicious...

We were told the Aplaya (meals Cabana) was closed for dinner due to a wedding celebration, so we had to order simple meals that would be delivered to the Bar.

Unfortunately the wait was close to 40min, and everybody was getting inpatient and hungry, and the bar waitress kept on calling the kitchen to see what was happening.
I presume they were just far too busy with the wedding, but they probably should have not suggested people eat at the bar...  We could have gone to the village to eat and would be cheaper too.

Eventually our food came, most people had ordered Tuna Melt sandwiches, Isabelle and I had Chicken Salad.
The desserts we had ordered were spectacularly presented  - a platter of fruit, Ube Pannacota (ube=purple yam), Trio of Creme Brule (Pandan, Mango & Ube) and Tiramisu.

Night photos of the pool and accommodation, with the Baroto bar at the end. 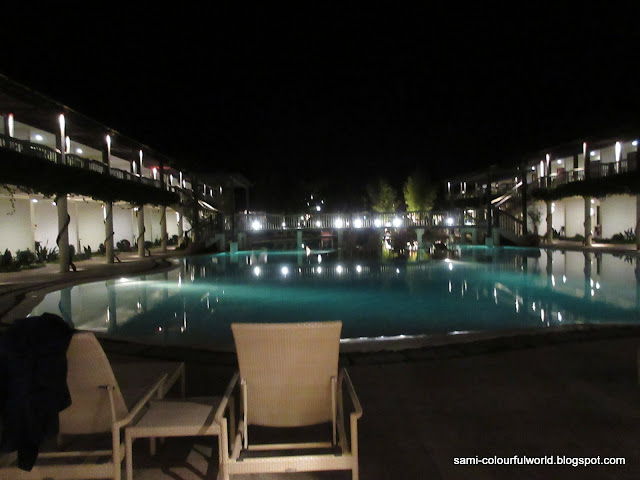 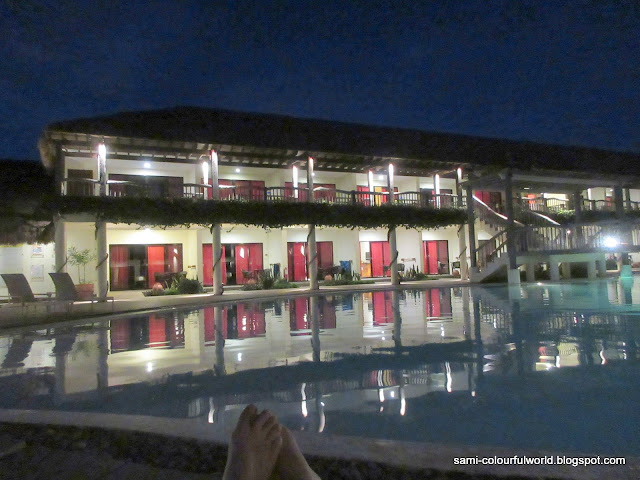 And it was an early night for us as the next day we would have to be at the Reception by 5,45am for our next adventure...swimming with whale sharks.

Unfortunately there were Chinese guests below our room, who sat outside their room for hours laughing and talking loudly to each other...
Jose was already fast asleep but he can sleep through an earthquake, unfortunately I can't, so eventually I called Reception and asked if they could get those people to go into their room and talk inside...softly preferably.
The receptionist apologized and said she would deal with it immediately, and 5 minutes later there was silence.
Again great service from the Bluewater Panglao resort.