Returning to the Beach - 2015 Sculpture by the Sea

With much needed rain falling today and tomorrow, it's certainly no time for a visit to the beach...but these photos were actually taken in March just after my arrival from Amsterdam.

That weekend of the 21st and 22nd March would be my last chance to visit the 2015 Sculpture by the Sea exhibition in Cottesloe Beach, so even though I still felt jet-lagged and quite tired I drove the 20 odd kms to the beach.

Being the last days of the exhibition, the exhibits were surrounded by people, there were actually more people on the sand than in the sea - so most of my photos have people in them.

Still, it was a worthwhile visit to once again see so much talent and ingenuity displayed in such a beautiful setting like the beach.


The piece above by Australian artist Norton Flavel, of a ball and chain, entitled "Lucky country" won the Western Australia Sculptor Scholarship award of $10,000 to be shared with Kim Perrier, a Canadian born/Australian resident artist, who exhibited the piece entitled "Ashes to Ashes" a burnt tree with carved figures (next photo).


The "Lucky Country" was also chosen by the Town of Cottesloe to be added to their collection, probably to be exhibited somewhere in Cottesloe in the near future.

Norton Flavel also had a popular entry in last's year exhibition with the "Bulk Carrier" an oversized wine cask. You can see his sculpture in this blog post.


The People's Choice Award of $2,500 was awarded to Chinese sculptor Wendi Zhang for her collection of a flock of huge red Flamingos, entitled "Mi No 5".  Not sure about that title, why no 5 when there were at least 10 flamingos?
Perth street artist Stormie Mills, won the Children's Choice Award with a pink gigantic rabbit entitled "The stormie mills project".

You can see some of Stormie Mills street artist work in this post about last year's Form.

There were a lot of giant statues this year from grown men to babies.

Chinese artist Chen Wenling 's "Harbour" is similar to the red piece (Childhood morning) he exhibited in 2012 and also the one exhibited in 2013 of a man on his head with a child on his feet. Not sure about the name though... 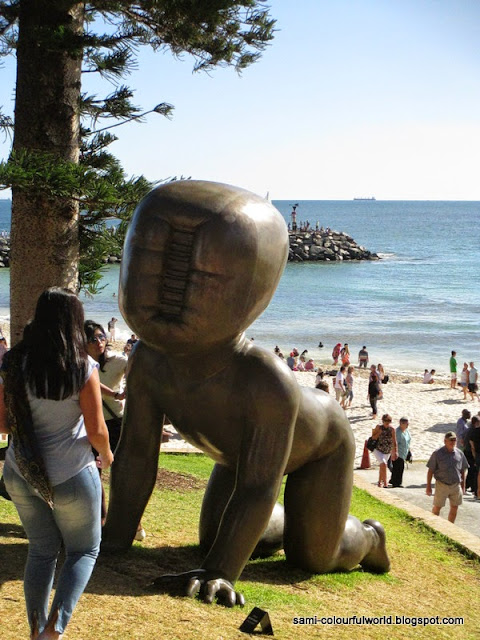 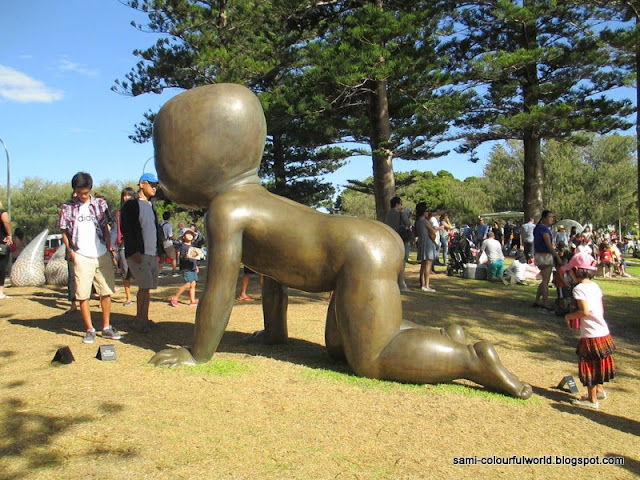 Thai artist Naidee Changmoh presented "The ascetic" below.
I had to look up the meaning of "ascetic" as I'd never heard it before - but it means recluse, solitary, celibate, spartan, puritan, monk.


Chinese artist Wang Shugang work of art consisted of statues of men sitting on balls entitled
"Men on Ball". It rather reminds me of "See no evil", "speak no evil" and "hear no evil", only there were 5 statues of men here and not only 3. 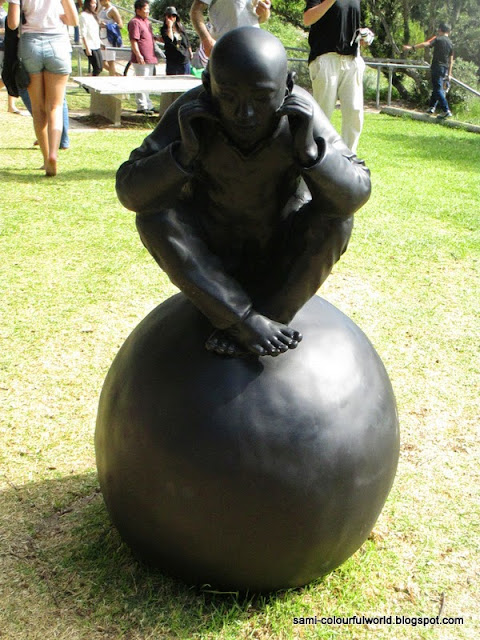 Soon I'll post some more photos of other sculptures that I enjoyed at this years Sculpture by the Sea.
Which one was your favourite?

Email ThisBlogThis!Share to TwitterShare to FacebookShare to Pinterest
Labels: Sculpture by the Sea