Last week I flew again to Adelaide, in South Australia, to spend time with my husband, during one of Adelaide's hottest weather spells!
Luckily he lives close to the beach in Glenelg and towards the end of the day when it wasn't so hot I would walk to the beach with a book, wet my feet and sit there until the sun set at around 8,30pm.  A magical time!!


One day I had the brilliant idea of cycling from Glenelg to Brighton just over 4,5km (3miles) away to go and see the Sculptures.

I'm no Cadel Evans, and I'm scared to ride on the road, but luckily there is a cycling/walking path along the sea front, except for a little detour where there is a Life Saving club by the beach edge and cars and cyclists need to go up one street around that area.


With a few exceptions, most of the sculptures were made in metal. My favourite was one made of marble and stone called "The greatest muse" , which are the windows capturing the even changing moods of the sea.

On my way back home I had the bright idea to rather cross the sand area instead of cycling ar0und  the detour, and boy did I regret that!!
Pushing the bicycle on the sand for around 15 minutes is very hard work!!
Phew I was exhausted by the time I got back on the cycling track and had to stop for a while and sit on a bench to catch my breath. The return home was certainly a lot harder. I was surprised that the following day my legs weren't hurting from all that cycling and walking.

Being summer and school holidays (kids starting school this week in most States), the beach suburb of Glenelg was always full of people walking around the town and on the beach. 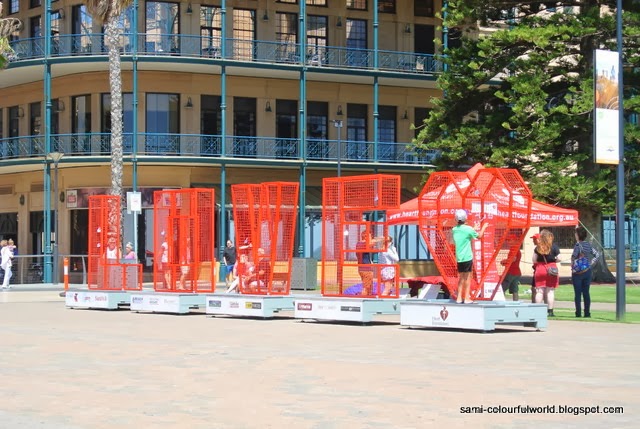 There was a fund raising event for "Heart Foundation" with huge "Love" letters in metal, and you could donate $10 in exchange for a heart locket where you could write a message to your loved one, to be hung on one of the letters.
These letters would then be going to Rundle Mall in the centre of Adelaide from the
1st to the 14th February and then to the Garden of Unearthly Delights in East Terrace Rd for the Adelaide Fringe Festival,  until the 16th March.
I thought it was quite a novel idea for a fundraiser and it seems to be such a "fashion" thing to pin lockets in bridges, etc.