If you live in Australia, you might long for a fairy tale white Christmas, so celebrating Christmas in July is the perfect compromise!
Having been born and raised in Africa, Christmas was always in the middle of Summer, so I didn't know otherwise, and in fact the Christmas cards that we saw in the shops with snow, reindeers, etc, didn't make much sense to someone celebrating this holiday in the heat.


Around the country a lot of restaurants advertise
functions celebrating Christmas in July, during the whole month of July, but even though I have been in Australia for 6 years I had never been involved in one of these celebrations.

But it all changed, when a couple of weeks ago, while having dinner with some Portuguese friends, one of them mentioned that the weather - cold and rain - was making her feel as if she was back in Portugal in the middle of December and looking forward to the Christmas celebrations.
To which I replied: So why don't we get together and organize a "Christmas in July", it's a popular thing in Australia anyway! And so it was decided that we would get together on Saturday, the 27th of July. 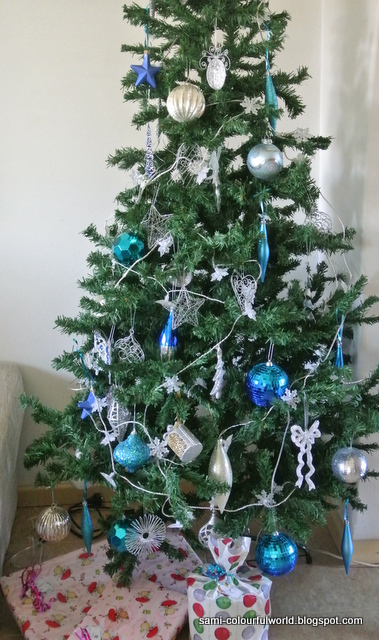 Of course the Christmas tree and decorations, came out of storage and there were a couple of presents just for the little ones.

Most of the traditional Portuguese Christmas recipes only make sense if you serve them in the middle of winter anyway, as they are usually heavy foods, cooked in hot ovens...unlike the light fare of seafood salads or barbecues served at the Australian Christmas tables.
For starters we had: "Rissois de camarao" (Prawn patties), "Broas" (Sweet raisin breads), walnuts, dried figs, a wonderful homemade Olive Pate...

Then came the "Caldo Verde" (Kale Soup with chourizo) to warm us up.


For the main meal there was: "Bacalhau com Natas" (Codfish in Cream Sauce) and Octopus with Chestnuts and Chourizo, the second time I cooked this for a Christmas dinner, and was very nice, although I forgot to cook rice as an side to help soak up all the sauce...Ooops, next time I won't forget!

The meal ended with a few traditional desserts, like "Arroz Doce" (Rice Pudding), the light and airy "Sonhos" (Portuguese dreams), "Sonhos de Abobora" (Pumpkin dreams), my favourite pudding, Leite Creme (Milk custard) and a Conventual pudding originally from Braga, in the North of Portugal, that I had never tasted before - "Pudim Abade de Pristos" (Pristos's Abbott Pudding), a pudding made with lard or bacon and caramel and lots and lots of eggs. Very rich and sweet, so only a tiny slice is enough...

It was a very enjoyable evening, sitting around the table enjoying the traditional Portuguese Christmas fare and the company of good friends. And of course every one contributed with something delicious to make this Christmas evening special. If you live in country where Christmas is celebrated in Summer, do you also celebrate Christmas in July?
If you liked the sound of any of these dishes and would like to give them a try, you are welcome to contact me for recipes.