After a great night's sleep, we got dressed, had breakfast, and packed our stuff into the car.
We filled up the tank, at 1,459$/litre, and at 10A.M., with the thermometer at 24.C, we set off on our way to Cervantes to go and visit the Pinnacles.
We took the Brand Highway (North West Coastal Highway until Geraldton) that runs close to the Indian Ocean so we would be able to have some scenic stops on our way.
The countryside is greener, prettier and with some hills and dazzling white dunes, unlike the barren northern area of WA.

Our first quick stop was Dongara/Port Denison, about 70kms away from Geraldton.
Shortly after leaving Port Denision the road forks and we took the Indian Ocean Drive that runs parallel to the sea. Next stop was another tiny sea side town - Leeman - 150km from Geraldton, where I climbed the Ti-Tree Point for some wonderful 360 degree views of sea and surrounding area. 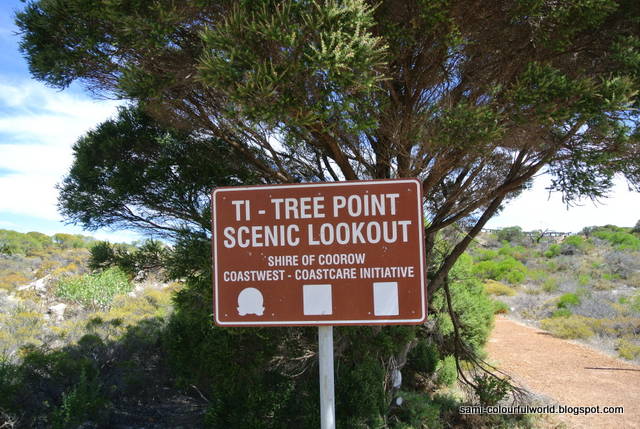 Another 45kms and we arrive in Jurien Bay in time for lunch. We take a few wrong turns until we find the road leading to the town's pier and a cafe near the water.
We ordered and sat down to a meal of fish and chips for 2 and hamburgers for the other 2,
all with fries of course! I don't think any of the restaurants where we ate along the way ever offered food without a side of chips, why not rice?

Jurien Bay, was first known to Europeans, when in 1801 a French expedition sailed along the WA coast, and named the spot after Charles Marie Jurien a French Naval officer.

The multi-million dollar Crayfish or Western Rock Lobster industry, has influenced the growth of Jurien Bay, with the building of jetties, fish processing factories, even an airstrip...
The majority of the catch is sold to Japan and the United States for big bucks!
This prosperity is patent in the big mansions and fleet of big fishing ships and yachts.

Crayfish season starts in November and every year the "Blessing of the Fleet" festival is held to commemorate the occasion.

Jurien Bay is also becoming popular for Perth residents as a summer destination, due to the proximity to Perth (220km), the great beaches and good fishing.
You can also snorkel and meet sea lions and dolphins within the Jurien Bay Marine Park sanctuary.

After lunch we drove 26kms south to Cervantes. Just 1km before the town, we turned to the Hansen Bay Lookout road, to visit Lake Thetis, one of the few places in the world where you can see "stromatolites".

We had decided not to stop at the Shark Bay Stromatolites, when we travelled from Denham to Coral Bay, so we had to stop and check these.

Around 4800 years ago the sea levels dropped and the salty lake became isolated, with coastal dunes forming around it.  Some fish and birds have adapted to the salinity and can be seen in the water.
The Stromatolites look very much like rocks, but are living fossils, built up by layers of bacteria and calcium that thrive in the salty lake.

Lake Thetis has a circumference of 1,2km and has a boardwalk path all round, so it makes for a enjoyable walk. Just like Jurien Bay, Cervantes is also a fishing industry town, as well as a tourist spot due to the nearby Pinnacles.
Named after a ship that was wrecked nearby, named "Miguel de Cervantes" after the author of "Don Quixote". Strangely enough, a lot of this small town's streets have Spanish names -  Seville street, Barcelona Drive, Cordoba Way, Valencia Road...

We drove into Cervantes, once again hoping to buy some frozen lobsters (we had been asking in every fishing town since Geraldton) and finally found a processing factory where we bought 4 frozen lobsters that went into our cooler box. Hurray!!

The attractions in Cervantes are the wildflowers in Spring, good fishing and beaches, four wheel driving through the sand dunes from Cervantes to Lancelin, buy some rock lobster at the Ocean Rock Factory, enjoy a lobster at lunch or dinner at one of the restaurants (season runs from November to June), visit Lake Thetis, visit the Emu Downs wind farm and climb the Molah Hill lookout, situated in-between Jurien Bay and Cervantes for views over both towns - quite a lot to do in such a small town!

After our purchase we drove another 18kms to the Pinnacles desert, where we paid $11 per vehicle  for the entry into the Nambung National park. After visiting the modern Discovery centre to learn about the fauna, flora and history of these strange rocky formations we got in the car again, to travel the 4km road loop around these majestic and strange rock formations. The driving trail is not suited to Caravans and trailers.
If you enjoy walking, you can leave the car in the car park and walk the 1,2km trail. 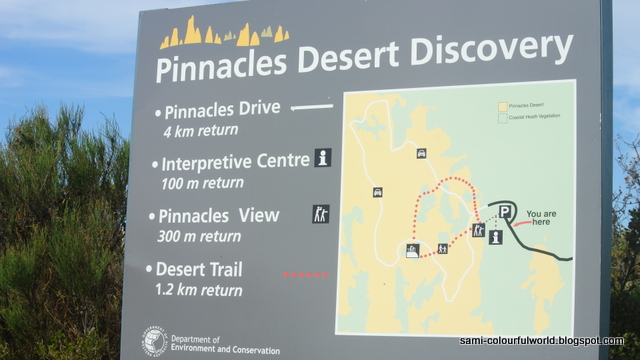 The Pinnacles desert with an area of about 190 hectares, contains thousands of limestone pillars, some up to 5mts high, rising from the ochre sands. Their formation mechanism is controversial and there are 3 different versions. Also not know is how long ago these were formed, with 80,000 years ago, being given as a guide.
They are best viewed at dawn or sunset when the shadows create patterns over the desert sands and the play of light brings their different colours and features.
The area attracts about 250,000 visitors a year, with the months from August to October being the most popular due to the wildflower season at the Nambung National park.
There are some mainly nocturnal animals in the park, but you might encounter Emus and Kangaroos during daytime. 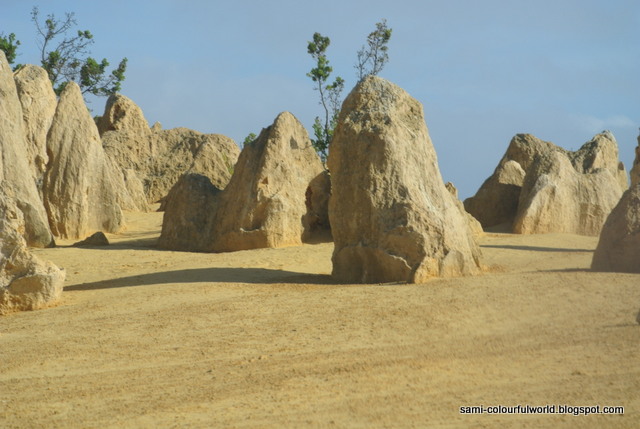 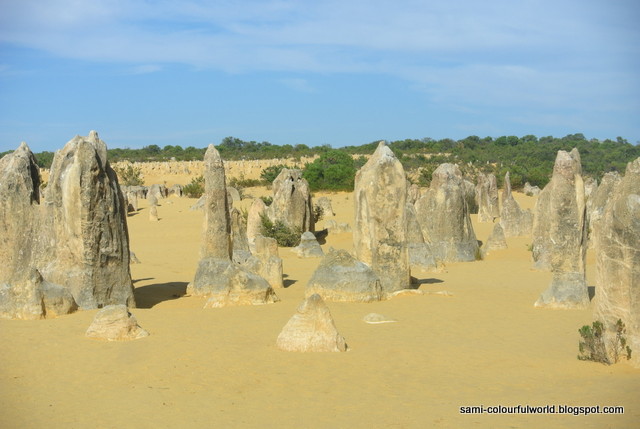 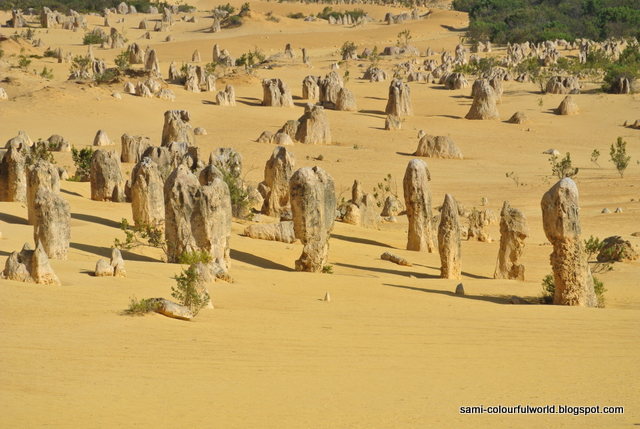 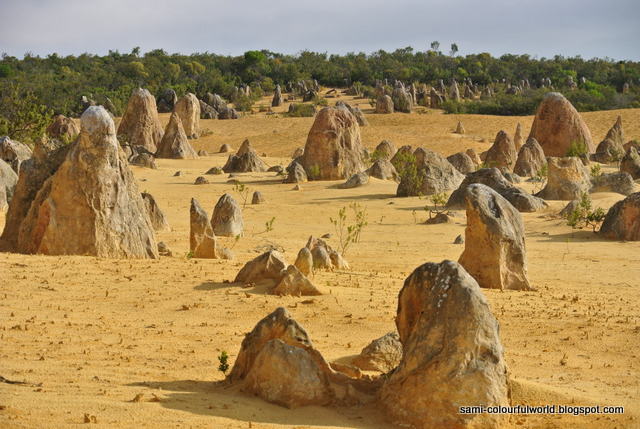 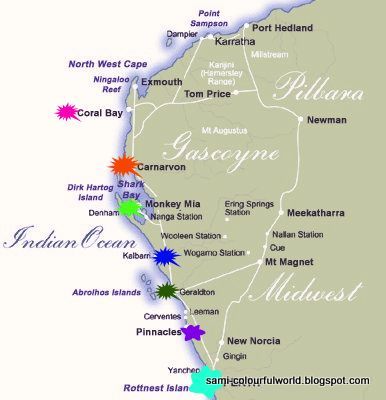 From this map you can see our route along the coast from Perth to Geraldton, Kalbarri, Denham/Monkey Mia, Carnarvon, Coral Bay and the return from Coral Bay to Geraldton, and via the Pinnacles to Perth, travelling 2,844km in 9 days!

I would certainly love to return to Coral Bay, and to visit Exmouth, where we didn't go, but I don't think I would do it again by car. It's just too far, and having seen what we wanted to see along the way, I think next time I would rather just fly from Perth to Exmouth, hire a car and then travel around the area.

And in case you are wondering what happened to the lobsters we bought in Cervantes, here they are! My wonderful husband cooked Lobster Thermidor for our farewell dinner with our daughter and son in law, the night before they flew back to France. We even had home made chips, yes chips again...although I think these were healthier than the ones we ate in the restaurants along our road trip. A wonderful meal to be remembered.


Hope you have enjoyed reading about our road trip and that my account and photos have whet your appetite to embark on a road trip in your country, or maybe even in Australia.